Francis Herbert Bradley was an influential English philosopher of the absolute Idealist school, which considers mind to be more fundamental feature of the universe rather than the matter. Born in the middle of nineteenth century to a well-known Anglican preacher and raised in a large family, he was never of robust health, as a result of which he was taken out of school to be educated at home. Later, he entered the University of Oxford and on graduating from there accepted a life-long fellowship at Merton College Oxford, thereafter devoting his life to philosophical research, producing some distinguished works like Appearance and Reality. Rejecting the utilitarian and empiricist trends in British philosophy, which are in general represented by John Locke, David Hume, and John Stuart Mill, he drew heavily on Immanuel Kant, Johann Fichte, Friedrich Schelling, and G.W.F. Hegel. His works, centered mainly on metaphysics, ethics, philosophy of history and logic, greatly impacted the thoughts of later-day philosophers and poets like Bernard Bosanquet, C. A. Campbell, James Ward, Alfred North Whitehead and T. S. Eliot. For his contributions to the field of philosophy and logic, he was later bestowed with the Order of Merit. John Locke
DID WE MISS SOMEONE?
CLICK HERE AND TELL US
WE'LL MAKE SURE
THEY'RE HERE A.S.A.P
Quick Facts

Francis Herbert Bradley was born on 30 January 1846 at Clapham, which at that time was a part of the English county of Surrey. Currently, it falls within the London Borough of Lambeth.

His father, Charles Bradley, was the vicar of Glasbury, well-known not only as an Anglican preacher, but also as a writer of sermons. His mother, Emma nee Linton, was his father’s second wife. Both of them were members of an actively evangelical humanitarian group called the Clapham Sect.

Born fourth of his parents’ nine children, Francis was also their eldest surviving son. Little is known about his other siblings except the youngest one, who happened to be the well-known Shakespearean scholar Andrew Cecil Bradley.

From his father’s first marriage, he also had six half-brothers and seven half-sisters. The eldest of his six half-brothers was the Rev. C. Bradley of Southgate, well known in educational circles. The fourth brother, George Granville Bradley, was dean of Westminster.

F. H. Bradley must have had begun his education at home. Eventually in 1856, ten years old Francis began his schooling at Cheltenham College, a public boarding school located in Cheltenham, Gloucestershire. He studied there until 1860.  During this period, he started learning German.

In 1858, his half-brother George Granville Bradley was appointed Headmaster of Marlborough College and in 1861 Francis too took transfer to that school. It is possible that he started reading Immanuel Kant’s Critique of Pure Reason during this period. However, it is not known if he read that in original German.

In the winter of 1862-63 he contracted severe typhoid fever, which almost killed him. Not long after, he also contracted pneumonia. Although he survived both the ailments, he became too weak to endure the rigor of the public schools and therefore was taken out of school in 1863.

In 1865, he entered University College, Oxford, getting a first in classical moderationsin 1867 and an unexpected second in literae humaniores (Greats) in 1869. However, some scholars believe he got second only because the examiners were ill-equipped to handle his brilliancy. 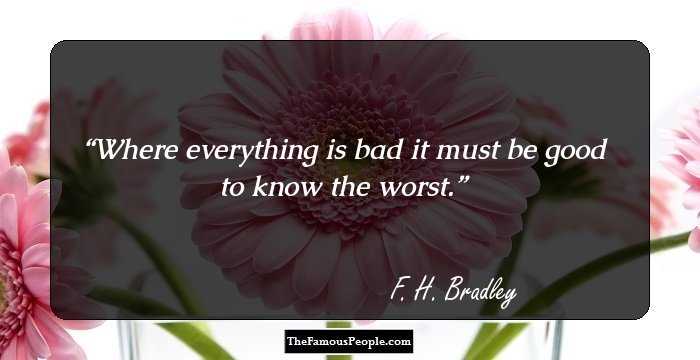 After completing his education in 1869, Francis Herbert Bradley started looking for college fellowship. After couple of refusals, he was ultimately elected to a fellowship at Merton College Oxford in December 1870. It had no teaching duty and was tenable for life as long as he did not marry.

In June 1871, he suffered a severe inflammation of the kidneys which left permanent effects. He became very susceptible to cold and could not tolerate fatigue and anxiety, which forced him to lead a semi-retired life. He could keep his job simply because his fellowship did not involve teaching assignments.

Although he never taught, he took an active part in the running of his college whenever he could. But on the whole, he led a secluded life and this relative seclusion as well as his unmarried status allowed him to devote his time to philosophical research.

His first substantial contribution to philosophy came in 1874, when he published a pamphlet on the nature of professional history. Entitled The Presuppositions of Critical History, the work argues that history cannot be subjected to scientific scrutiny and hence history writing is essentially subjective.

Although The Presuppositions of Critical History did not initially attract much attention, it did have an impact on scholars like R.G. Collingwood.  Nonetheless, he continued to write, publishing his first major works in 1876. Entitled Ethical Studies, the work tried to expose the confusion of John Stuart Mill’s doctrine of Utilitarianism.

In 1877, he published another pamphlet, criticizing Henry Sidgwick's The Methods of Ethics. Divided into three parts, treating Sidgwick's definitions, arguments, and his view of ethical science, the work was later published in book form alongside his 1874 work as The Presuppositions of Critical History.

Although he devoted his life to philosophical writings, he did not confine himself to a bookish existence. While he continued to write, he frequently traveled to southern English and Mediterranean seaside resorts, possibly to escape the damp and chilly Oxford winters.

In 1883, he published his second important work, Principles of Logic. In this work, he denounced the Empiricists, declaring their logic to be limited, rejecting the view that judgments were formed by conjoining ideas, instead suggesting that a group of correlated ideas were indicative of a greater, but elusive reality.

After completion of Principles of Logic, Bradley turned his attention to metaphysics. The result was Appearance and Reality: A Metaphysical Essay, which he published in 1893.

In 1902, F. H. Bradley was offered founding membership of the British Academy, the national academy for the humanities and the social sciences. However, he declined the offer, possibly because his inclination to avoid public occasions.

In 1914, he published his last major work, Essays on Truth and Reality. However, he remained philosophically active for another ten years, continuing to produce many minor works, including some papers of psychology, a collection of which were posthumously published in two volumes as Collected Essays. 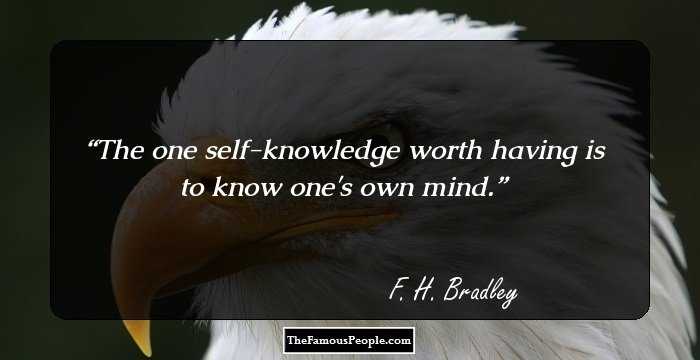 F. H. Bradley is possibly best known for his 1893 work, Appearance and Reality: A Metaphysical Essay. In this work, he claims that most things are appearance and that the reality, which he calls absolute, has been misrepresented by these appearances. Known for its polemical style, the work greatly influenced later philosophers like Bertrand Russell and G.E. Moore.

In 1883, F. H. Bradley was conferred with an honorary degree LL.D. by the University of Glasgow.

In 1924, King George V bestowed on him the Order of Merit and with that he became the first philosopher to be singled out for this honor. 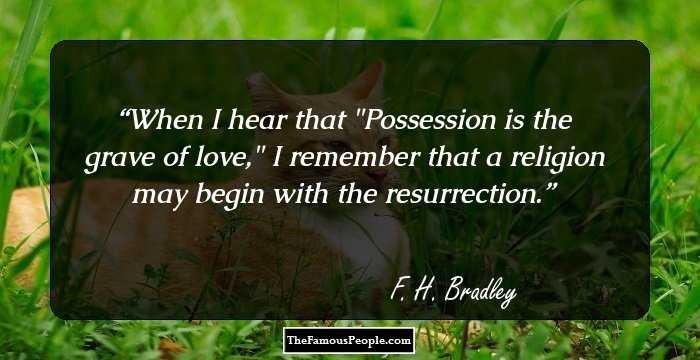 F. H. Bradley never married, possibly because of his ill-health. Neither did he socialize much. Robin George Collingwood wrote of him, ’Though I lived within a few hundred yards of him for sixteen years, I never to my knowledge set eyes on him.’ What we known about him is mostly from his writings.

Although he did not socialize, his writings show that his experiences were not confined merely to books. It is also known that he liked guns and disliked cats and often indulged in shooting the latter in his college ground at night.

According to hearsay, while on a trip to the continent he met an American engineer named Radcliff, and fell in love with one of his daughters. In later years, he dedicated some of his books to some E.R and it is believed that the mysterious E.R was none other than the woman he loved.

Politically, he held rather conservative views although they were never very narrow.  His writings also show that he was religious, but found the religiosity of his father’s household rather oppressive.

On 18th September 1924, after a few days’ illness, Bradley died from blood poisoning. His mortal remains were buried in Holywell Cemetery, Oxford.

Bradley's Regress, a philosophical problem concerning the nature of relations, has been named after him. He raised the problem while discussing the bundle theory of objects, later concluding that the regress should lead us to dump the concept that relations are "independently real".

See the events in life of F. H. Bradley in Chronological Order