Bertrand Arthur William Russell, 3rds Earl Russell, OM, FRS, was one of the finest names in the list of great philosophers, logicians, mathematicians, historian, and social critics from Great Britain. He was also a proud receiver of the Nobel Prize in Literature in 1950. Throughout his life, Russell shuffled himself as a liberal, a socialite and a pacifist but never agreed to adapt any of these intellectually. In 1900s, Russell escorted the British “revolt against idealism”. Russell is also believed to be the founder of the analytic philosophy, accompanied by his ancestor Gottlob Frege and apprentice Ludwig Wittgenstein. Russell’s famous philosophical essay “On Denoting” has been acknowledged as a “paradigm of philosophy”. Russell was also a remarkable anti-war activist and also imprisoned for carrying a pacifist activism during World War I. Eventually, he also raised voice against Adolf Hitler and criticized Stalinist totalitarianism. He even campaigned against the involvement of the United States in the Vietnam War. Russell also acted as a blunt supporter of nuclear disarmament. The works of Bertrand Russell had a noticeable impact on logic, mathematics, set theory, linguistics and specifically on philosophy of language, epistemology, and metaphysics. G. H. Hardy
DID WE MISS SOMEONE?
CLICK HERE AND TELL US
WE'LL MAKE SURE
THEY'RE HERE A.S.A.P
Quick Facts

British Celebrities
Welsh Celebrities
Philosophers
Mathematicians
British Men
Welsh Men
Childhood & Early Life
Bertrand Arthur William Russell was born on 18 May 1872 at Ravenscroft, Trellech, Monmouthshire into an aristocratic family. His grandfather, John Russell, served twice as the Prime Minister of Great Britain and was later given the title of 1st Earl Russell by Queen Victoria.
Bertrand’s father, John Russell, the Viscount Amberley, was known for his unorthodox views. He actively supported birth control and women’s suffrage. He was an atheist and willed his sons to be brought up as agnostic.
His mother, Viscountess Katherine Louisa Amberley, the daughter of 2nd Baron Stanley of Alderley, was also a suffragist and an early proponent of women's rights. They had three surviving children, John Francis, Rachel and Bertrand.
By January 1876, young Bertrand had lost his parents as well as sister, Rachel. Thereafter, Bertrand and Frank were placed under the guardianship of their paternal grandparents and began to live with them at Pembroke Lodge, Richmond Park. Unfortunately, his grandfather too passed away in 1878.
As Bertrand grew up, his grandmother employed tutors to teach him at home, but sent Frank to school. As a result, he spent his adolescent years devoid of the company of other children.
In 1890, Russell received a scholarship to read for the Mathematical Tripos at Trinity College, Cambridge. This marked the end of his isolation and the beginning of a new phase in his life. Here, he became acquainted with Alfred North Whitehead and at his recommendation, joined Cambridge Apostles.
The Apostles was a secret society, whose members included many well-known philosophers. Listening to their discussions, Russell became interested in philosophy. Therefore, after he graduated First Class in mathematics as seventh Wrangler in 1893, he concentrated on philosophy.
Subsequently in 1894, Russell completed the Moral Sciences Tripos and then joined the British embassy at Paris as an attaché. Meanwhile, he also started writing a thesis, ‘An Essay on the Foundations of Geometry’, which in 1895, earned him a fellowship at Trinity College.
After few months at Paris, Russell moved to Berlin, where he studied social democracy for few more months. During this period, he decided to write two series of books, one on the philosophy of the sciences and the other on social and political questions. Later, he returned to England and concentrated on philosophy. 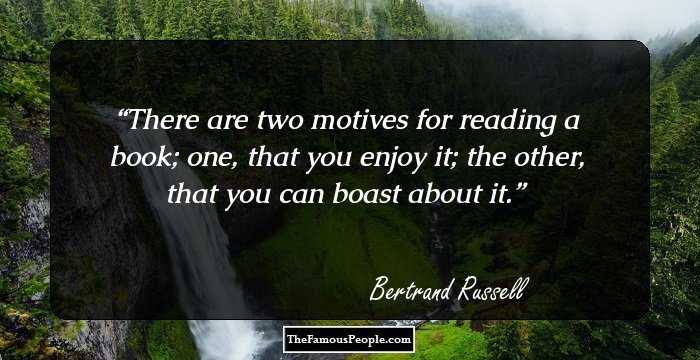 Quotes: You
Continue Reading Below
Early Career
In 1896, Russell began his career as a lecturer of German social democracy at the London School of Economics. Sometime now, he also started an intensive study on foundation of mathematics; the fruit of which was published in 1898 as ‘An Essay on the Foundations of Geometry’.
Later in 1899, he was appointed lecturer at Trinity College, Cambridge. In the following year, he went to Paris to attend International Congress of Philosophy. There he met Italian mathematicians, Giuseppe Peano and Alessandro Padoa.
Russell was much impressed by their work on set theory. Therefore, on returning to England, he began to study Giuseppe Peano’s work, ‘Formulario Mathematico’ (Formulation of mathematics). In 1901, it led to his discovery of ‘Russell’s Paradox’.
However, it took a few more years to fully develop the concept. Finally in 1903, he presented the paradox in his well-known book, ‘The Principles of Mathematics’. Then in 1905, he published another of his major works, ‘On Denoting’.
In 1910, he became a lecturer in the University of Cambridge. In the same year, he started publishing ‘Principia Mathematica’, written with Whitehead in three volumes; the last volume being published in 1913. This, along with the earlier work on the same topic, made him world-famous. 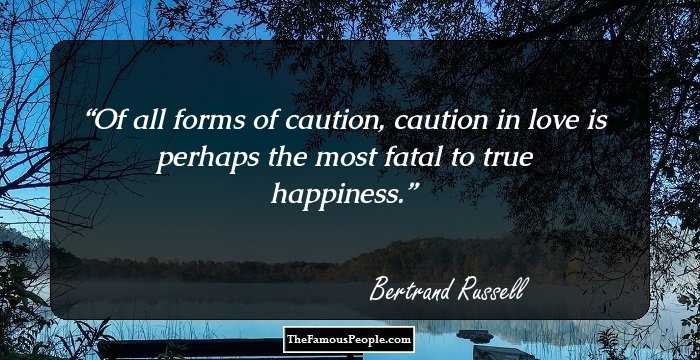 Quotes: Love, Happiness
During the World War I
When in August 1914, the United Kingdom entered the First World War; Russell joined the pacifist group that was spearheading a movement against it and was convicted under the Defence of the Realm Act 1914. As a result of this, he was dismissed from Trinity College in 1916.
He was also fined £100. He refused pay it, hoping that he would be sent to jail because of non-payment. However the authorities raised the money by auctioning his books and so he was allowed to go free.
In 1917, he played a major part in organizing a socialist convention in Leeds and his lectures there were highly received.
Continue Reading Below
Next in 1918, he began lecturing publicly against UK’s invitation to USA to join the war on its side. This time, he was jailed for six months. He used the time to write his book, ‘Introduction to Mathematical Philosophy’.
After the War
In January 1920, after the end of World War I, Russell was reinstated at Trinity College and started taking classes. In August, he traveled to Russia as part of an official delegation sent by the British government and was very disappointed at the state of condition there.
Later in autumn, he took leave of absence and spent the period lecturing in China and Japan. He returned to England on 26 August 1921, and resigned from his post due to personal reasons. Thereafter, he started earning by writing.
In 1922 and 1923, he also stood for election from Chelsea on the behalf of the Labour party. However, because his views were radical and the constituency was very conservative, he lost on both occasions. Next from 1927 to 1932, he ran the experimental Beacon Hill School with his second wife Dora.
Meanwhile, in 1931, his elder brother Francis, the 2nd Earl Russell died. He now inherited the title and became the 3rd Earl Russell. Later in 1937, he accepted a position at the London School of Economics and became a lecturer on science of power. 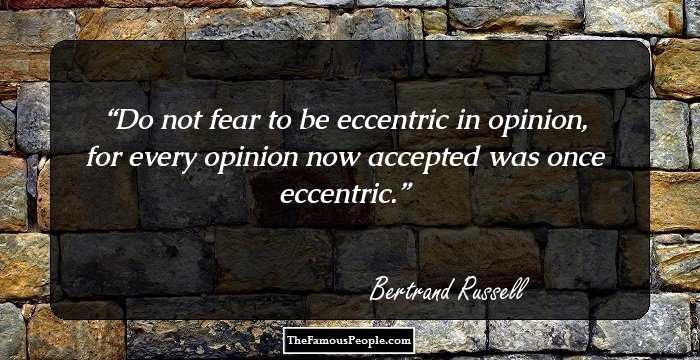 Quotes: Fear
In the United States
In 1938, he went to the United States, where he became a visiting professor at the University of Chicago. Later in 1939, he moved to Los Angeles, where he was a lecturer at the UCLA Department of Philosophy.
In 1940, he received appointment as a professor of philosophy at the City College of New York (CCNY). Unfortunately, because of a public outcry about his liberal views, he was declared "morally unfit" to teach at the college by a court verdict. Although he received the support of the intellectuals, he lost his job.
Thereafter, he signed a five year contract with Barnes Foundation in Merion, Pennsylvania. In this capacity, he gave a number of lectures on the history of philosophy to a varied audience. These lectures later formed the basis of his later book, ‘A History of Western Philosophy’.
Continue Reading Below
His relationship with the eccentric Albert C. Barnes, the Director of the Barnes Foundation, soon became sour. In January 1943, Barnes announced the cancelation of the contract. In 1944, Russell returned to the UK and rejoined the faculty of Trinity College.
Later Years
In 1945, Russell published ‘A History of Western Philosophy’. Immediately it became a best seller, which solved much of his financial woes. Moreover, he now became famous even outside the academic circle and his views began to matter.
Concurrently, he became politically more active and worked primarily in matters relating to nuclear disarmament and the Vietnam War. In 1955, he along with Albert Einstein issued Russell–Einstein Manifesto, highlighting the dangers of nuclear war. He was also very concerned about the Suez Crisis.
In 1961, he took part in an anti-nuclear demonstration in London and was arrested for "breach of peace". As he refused to pledge "good behaviour", he was imprisoned and had to spend seven days in Brixton Prison.
In 1962 Russell played a public role in the Cuban Missile Crisis. In 1966-1967, he worked with others to form the ‘Russell Vietnam War Crimes Tribunal.’ Its aim was to investigate the conduct of the United States in Vietnam.
He continued to work until his death. On 31 January 1970, two days before his death, Russell issued a statement condemning "Israel's aggression in the Middle East". He particularly condemned Israeli bombing raids deep in Egyptian territory.
Major Works
While ‘Russell’s Paradox’ is his first major work, Bertrand Russell is best remembered for his 1945 book, ‘A History of Western Philosophy’. It provides a survey of Western philosophy from the pre-Socratic days to early 20th century. The book was an instant hit and it remains in print since its first publication.
Awards & Achievements
Russell was elected a fellow of the Royal Society in 1908, and elected a Lifetime Fellow of Trinity College in 1944.
He was also awarded the Order of Merit in the King's Birthday Honours of 9 June 1949.
Continue Reading Below
In 1950, Russell was awarded the Nobel Prize in Literature “in recognition of his varied and significant writings in which he champions humanitarian ideals and freedom of thought".
He was also awarded the De Morgan Medal of the London Mathematical Society in 1932, Sylvester Medal of the Royal Society in 1934, Kalinga Prize in 1957 and Jerusalem Prize in 1963.
Personal Life & Legacy
Bertrand Russell married Alys Pearsall Smith on 13 December, 1894. The marriage began to fall apart from 1901 and they began to live separately sometime after that. Ultimately, they divorced sometime in late September 1921. They did not have any children.
Next on 27 September, 1921, Russell married Dora Black, a British author, feminist and socialist campaigner. At the time of the marriage Dora was six months pregnant.
Their eldest child, John Conrad Russell, 4th Earl Russell, was born on 16 November 1921. They also had a daughter, Katharine Jane Russell, born on 29 December 1923. The marriage ended in a divorce in 1935.
Russell next married his children’s governess, Patricia Spence. The wedding took place at the Midhurst register office on 18 January 1936. It is believed that she had made significant contribution to ‘A History of Western Philosophy’.
The couple had one son, Conrad Sebastian Robert Russell, 5th Earl Russell, who grew up to be a prominent historian and a leading figure in the Liberal Democrat party. They separated in 1949 and the divorce finally came through in 1952.
In December 1952, he married Edith Finch. It was a happy marriage and they remained together until his death.
On 2 February 1970, Bertrand Russell died from influenza at his home in Penrhyndeudraeth, Wales. His body was cremated on 5 February 1970 and the ashes were scattered over the Welsh mountains later that year. His numerous books and discoveries like ‘Russell’s Paradox’ continue to carry on his legacy.
Recommended Lists:
Intellectuals & Academics #19

Quotes By Bertrand Russell | Quote Of The Day | Top 100 Quotes

See the events in life of Bertrand Russell in Chronological Order