(The Most Influential English-Speaking Philosopher of the Nineteenth Century)

John Stuart Mill was a British philosopher, economist and political theorist, best known for his contribution to the concept of liberty. He was among the first people to justify freedom of individual against state control and advocate women suffrage. Born as the son of the philosopher, historian and economist James Mill, he was trained from early childhood by his father and his friend Jeremy Bentham to carry on the cause of utilitarianism, which they had jointly expounded. To keep him away from distraction, they barred him from mixing with other children, as a result of which he was mostly brought up in adult company, buried in books. So intense was the tutoring, that by the time he reached fourteen, he had gone through Greek and Latin classics and had also studied world history, logic and mathematics as well as the basics of economic theory. However, he soon came out of his father’s shadow and developed his own theories. Subsequently, he began to write extensively on varied subjects, which had far reaching influences across the world. British People
Economists
Philosophers
Non-Fiction Writers
British Men
Childhood & Early Life
John Stuart Mill was born on 20 May 1806 in the Pentonville area of London. His father, James Mill, was a Scottish historian, economist, political theorist and philosopher, best known for his work ‘The History of British India’, in which he denounced Indian culture. His mother’s name was Harriet Burrow.
John was the couple’s eldest son. Born a precocious child, he was brought up very rigorously by his father, who wanted him to carry on the cause of utilitarianism, which he had been advocating with his friend Jeremy Bentham.
James Mill not only took full charge of his son’s education, but also kept him away from other children. As a result, young John Stuart Mill spent most of his time in his father’s company. Thus he imbibed much of his father’s ideas from an early age.
From Mill’s autobiography, published posthumously in 1873, we know that he started learning Greek from the age of three. By eight, he had read, among other things, Aesop's Fables, Xenophon's Anabasis, and the works of Herodotus and had also studied a great part of English history, arithmetics, physics and astronomy.
Also at eight, Mill started learning Latin and algebra and began to study the works of the Greek mathematician Euclid of Alexandria, the father of Geometry. By the age of ten, Mill could read Plato and Demosthenes.
At twelve, he began a thorough study of Scholastic logic. When he turned thirteen, he was introduced to political economy and began to study the work of Adam Smith and David Ricardo.
The break came when in May 1820, he traveled to France with the family of Samuel Bentham, brother of Jeremy Bentham, remaining there till July 1821. The visit opened new horizons for him.
While the friendly disposition of the French people greatly impressed him, the visit was also intellectually stimulating as he attended the winter courses on chemistry, zoology, logic and higher mathematics in Montpellier. Moreover, a visit to the mountainous region imbibed in him a love for mountains, which remained with him forever. 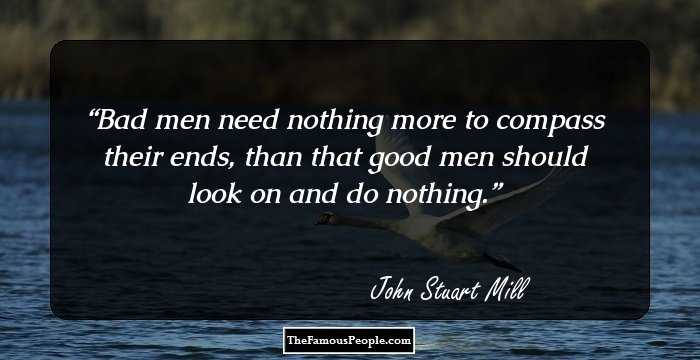 Quotes: Need
Continue Reading Below
Return To England
Initially James Mill wanted his son to join the bar. Therefore, on returning to England John Stuart Mill began to study psychology and Roman law with John Austin. Concurrently, he also studied the works of writers like Pierre-Étienne-Louis Dumont, Étienne Bonnot de Condillac and Claude-Adrien Helvétius.
Sometime now, he started contributing to different periodicals, such as ‘The Traveller’ and ‘Morning Chronicle’. In 1822-23, he established the Utilitarian Society with his friends.
In 1823, James Mill decided against his son joining the bar. So he secured a position for him in the examiner’s office of the India House. Along with working at the India House, John Mill continued his scholarly pursuits.
When in 1824 the ‘Westminster Review’ was founded, he also began to contribute to that. From 1825, he began to edit Jeremy Bentham’s manuscript, ‘Rationale of Judicial Evidence’. 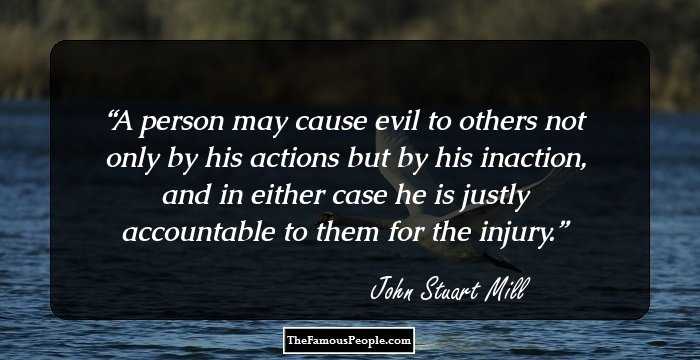 Mental Crisis & Awakening
However in 1826, Mill started having a misgiving about the goal of his life. The previous year, he had taken part in a debate at the London Debating Society for the first time. There he found that he was being looked upon as an intellectual machine, ready to grind opposing views.
He experienced a kind of mental depression and soon began to ask himself if creating a just society, for which he had been groomed since childhood, would actually make him happy. The answer he found to be negative. But he was too much in awe of his father to talk to him about it.
Therefore, he started wrestling with himself, contemplating anew. Alone in a gloomy solitude, he even thought of committing suicide. Fortunately, saner thought prevailed and he started reformulating the theories he had hitherto embraced.
It is believed that the poems of William Wordsworth helped him to come out of the labyrinth. He emerged from it with a more catholic view of human happiness and a hatred of sectarianism. Moreover, he learned to appreciate poetries and to moderate his ambition to practical possibilities.
Continue Reading Below
He also began to realize that his emotional growth had been compromised by his father’s intense analytical training. He therefore began to look for a philosophy that would help him to overcome his shortcomings.
Although he now rejected his father’s theory of ‘natural justice’ he also realized that rejecting something in totality was also a negative idea. He therefore allowed himself to appreciate their good points. Soon he realized that philosophy was something more complex than what he had previously understood.
At the same time, he began reading works of a wide variety of writers such as John Ruskin, Auguste Comte and Alexis de Tocqueville. Subsequently, he started corresponding with many of them.
Meanwhile in 1828, he completed his probation period at the India House and was promoted to the post of assistant examiner of the East India Company. He held the position till 1836.
Return To Active Life
In 1830, John Stuart Mill visited Paris, where he met many young liberals. On his return, he began to write a series of letters, which were published in ‘The Examiners’. Next in 1833, he wrote a series of articles on ‘The Spirit of the Age’ for the same journal. They marked his return to activity.
Later in 1832 and 1833, he contributed essays to a number of magazines such as ‘Tait’s Magazine’, ‘The Jurist’, and ‘The Monthly Repository’. ‘Thoughts on Poetry and Its Varieties’, published in 1833, is an important work of this period.
In 1835 Sir William Molesworth founded ‘The London Review’ and appointed John Stuart Mill as its editor. Later in 1836, the journal was amalgamated with ‘The Westminster’. It now began to be known as ‘The London and Westminster Review’. Mill continued as its editor until 1840.
Also in 1836, James Mill passed away. John Stuart Mill now took his father’s place in the India House and became responsible for the British East India Company’s correspondence with the Indian princely states.
More importantly, he now began to enjoy greater intellectual freedom and started creating a new philosophic radicalism, which borrowed heavily from other thinkers like Coleridge and Thomas Carlyle. At the same time, he took care to retain some aspects of Bentham’s philosophy.
Continue Reading Below
By 1838, he had established himself as a thinker and writer. Among the more important works of this period are ‘Writings of Alfred de Vigny’ (1838), ‘Bentham’ (1838), and ‘Coleridge’ (1840), ‘M. De Tocqueville on Democracy in America’ (1840).
However, his major works began to appear from 1843, when he published ‘A System of Logic, Ratiocinative and Inductive’. In this book, Mill formulated the five principles of inductive reasoning; today these five principles are known Mill's Methods.
Thereafter, he kept on publishing his works on regular basis. ‘Michelet’s History of France’ (1844), ‘Guizot’s Essays and Lectures on History’ (1845), and 'Principles of Political Economy' (1848) are some of his most important works of this period. Concurrently, he continued serving the East India Company as before.
In 1856, Mill was promoted to the position of Examiner of Indian Correspondence. When in 1858, the Crown took direct control over India, Mill wrote a number of petitions defending East India Company’s rule, most important of which was ‘Memorandum on the Improvements in the Administration of India during the Last Thirty Years’.
Later, he was offered a seat on the Council of India, created to advice the new Secretary of State for India. However, because he disapproved of the new system of rule, he declined the offer. Instead, he retired with a pension of £1,500 and concentrated on his writing. 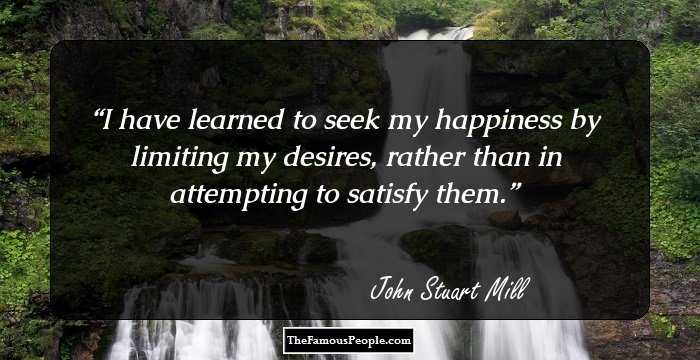 Quotes: Happiness, I
Later Years
In 1859, he published four works; ‘Dissertations and Discussions', 'A Few Words on Non-intervention', 'On Liberty' and 'Thoughts on Parliamentary Reform’. Later he wrote 'Considerations on Representative Government' (1861) and ‘Utilitarianism’ (as essay in 1861 and in book form in 1863).
From 1865, he started concentrating on philosophy and wrote ‘An Examination of Sir William Hamilton's Philosophy' and 'Auguste Comte and Positivism'. This was also the year he was elected to the parliament from Westminster.
As an MP he introduced a bill calling for women suffrage and strongly defended his position. However, he failed to have it passed. Yet, it remained an important milestone for the women’s voting right campaign. He also called for universal adult suffrage and introduction of proportional representation.
Also in 1865, he was elected Rector of the St. Andrew University, a position he held until 1868. However, in spite of the busy schedule he never stopped writing. His autobiography was published posthumously in 1873 and two others, ‘Nature, the Utility of Religion and Theism’ and ‘Three Essays on Religion’ the year after.
Major Works
‘On Liberty’, published in 1859, is probably Mill’s most significant work. It tries to apply his ethical system of utilitarianism to society and also attempts to define the relationship between authority and liberty. However, he made it clear that the concept is not all inclusive and stated "Despotism is a legitimate mode of government in dealing with barbarians".
Personal Life & Legacy
In 1851, Mill married Harriet Taylor, a women’s right advocate and a philosopher, for whom Mill had great regard and whom he treated as intellectually equal. They probably first met sometime in 1830; but at that time, she was already married to John Taylor and had three children with him.
Over the years, Mill and Harriet Taylor developed an intimate, but chaste friendship. They decided to get married after John Taylor died in 1849, but to avoid scandal, waited for two years. Unfortunately, Harriet died in 1858. Thereafter, her daughter Helen Taylor became Mill’s constant companion.
On 8 May, 1873 Mill died from erysipelas in Avignon, France, where he maintained a villa. He was buried there alongside his wife.
Today, he is known as "the most influential English-speaking philosopher of the 19th century”. Apart from his vast body of works, a bronze statue on the Thames embankment in London continues to carry on his legacy.
Recommended Lists:
Writers #105
Intellectuals & Academics #41