William Beveridge was a British social reformer and economist who constantly fought against the evil of unemployment for the development of a welfare state. He came to prominence for his ‘Social Insurance and Allied Services’ report of 1942, popularly known as the Beveridge Report, which was implemented in the Labour government of 1945. Through the report, he aimed at shaping Britain’s post-war welfare state policies and institutions. He appealed to the government to fight against the five ‘Giant Evils’ of the society including Want, Disease, Ignorance, Squalor and Idleness. Early in his life, Beveridge worked against combating issues of unemployment and poverty. For the same, he took up a seat on the Board of Trade under Winston Churchill. He organized the implementation of national system of labour exchange and national insurance. He also served as the Director of the London School of Economics and Political Science and was elected as Master of University College, Oxford British Celebrities
British Men
Balliol College, Oxford
Male Leaders
Pisces Leaders
Childhood & Early Life
William Henry Beveridge was born on March 5, 1879 in Rangpur, then a part of India to Henry Beveridge and Annette Akroyd. His father was employed as an officer in Indian Civil Service.
Young Beveridge attained his preliminary education at Charterhouse, in Godalming, Surrey. For higher education, he enrolled at Balliol College at the University of Oxford, studying mathematics and classics. Graduating in first class, he went on to study law. 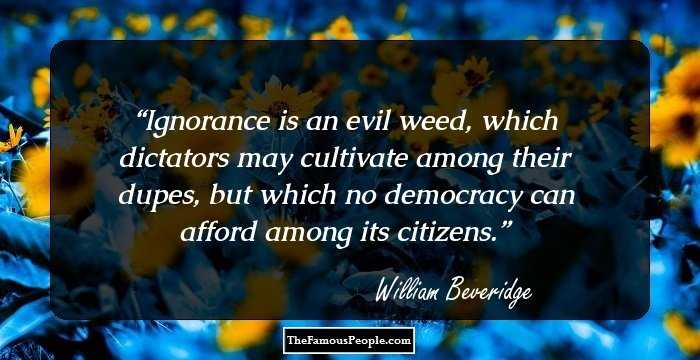 Continue Reading Below
Career
Completing studies, Beveridge commenced his career as a lawyer. He soon became interested in social service and started penning articles on the same for the Morning Post newspaper.
His lifelong interest in the causes of unemployment first began in 1903, after his appointment as a sub-warden at Toynbee Hall, a settlement house in London. During this time, he closely associated with Sidney Webb and Beatrice Webb, working on their theory of social reform
Beveridge actively took part in the social reform movement which targeted at changing the social scenario, by promoting free school meals, old age pension and so on. He also campaigned for a central labour exchange system that would put an end to unemployment and with that poverty.
In 1908, he was introduced to Winston Churchill by Beatrice Webb during a dinner party hosted by the latter. Impressed by Beveridge’s reformist ways, Churchill invited him to join the Board of Trade. As an advisor, Beveridge successfully implemented a national system of labour exchange and national insurance, thus fighting unemployment and poverty.
During the First World War, Beveridge was in charge of mobilising and controlling manpower. Post war, he was knighted and was made permanent secretary of Ministry of Food.
In 1919, he gave up on civil service to take up the chair of the London School of Economics and Political Science. He served the post until 1937. During the same time, he served as the director of LSE,.
In 1933, he established the Academic Assistance Council. Through this initiative, he recruited former academicians who had been removed from their posts on account of race, religion or political stand. In 1937, he was appointed as the master of the University College, Oxford.
in 1936, he was offered to take charge of the Welfare department of the Ministry of Labour by Ernest Bevin. Though he declined the offer, Beveridge expressed his interest in organizing manpower. As such, temporarily, he served as a civil servant.
In 1941, a committee of officials was formed by Ernest Brown, Minister of Health, to survey the existing social insurance and make recommendations. Beveridge was made chairman of commitee. He reluctantly accepted the appointment as he thought it to be a distraction from his work on manpower.
Continue Reading Below
Complying with the new responsibility as chairman of the social insurance and allied services committee, Beveridge presented a report in 1942 stating that a weekly national insurance should be contributed by the working class, which in turn would be forwarded to people who are sick, unemployed, retired or widowed. This way, a minimum standard of living would be established
Beveridge argued in his 1942 report that the government should find ways to fight the five ‘Giant Evils’ – Want, Disease, Ignorance, Squalor and Idleness. He also proposed establishment of a National Health Service.
In 1944, Beveridge came up with his work, ‘Full Employment in a Free Society’ through which he brought to limelight ways in which full employment could be attained. Alternative measures included Keynesian-style fiscal regulation, direct control of manpower, and state control of the means of production.
On the political front, he became a member of the Liberal Party. In 1944, he was elected to the House of Commons in a by-election. He served as the MP for the constituency of Berwick-upon-Tweed. However, his parliamentary stint did not last long as he was defeated in 1945 general elections.
Following the defeat of the Churchill’s party in the 1945 general election, Clement Attlee came to power as the new prime minister. Immediately, he introduced the welfare state that was outlined in the 1942 Beveridge Report, which led to establishment of National Health Service which covered taxpayer funded medical treatment. Furthermore, a national system of benefits was also introduced to provide 'social security' to people from ‘cradle to grave’.
In 1946, he became leader of the Liberals in the House of Lords. For a decade, from 1952 to 1962, he served as the President of the charity Attend.
In his lifetime, he was a member of the Eugenics Society that promoted the study of methods to improve human race by controlling reproduction. He credited the promotion of children’s allowance in his 1942 Report to Eugenics Society.
Major Works
William Beveridge’s most notable contribution came with his 1942 report, Social Insurance and Allied Services. Through this work, he aimed at re-establishing Britain’s welfare state post World War II by providing social security to citizens from ‘cradle to grave’. He encouraged establishment of National Health Insurance which would provide free medical treatment.
In his lifetime, Beveridge penned numerous works including, ‘Unemployment: A Problem of Industry’, ‘Planning Under Socialism’, ‘Full Employment in a Free Society’, ‘Pillars of Security’, ‘Power and Influence’ and ‘A Defence of Free Learning’.
Awards & Achievements
In 1946, he made Baron Beveridge, of Tuggal in the County of Northumberland.
Personal Life & Legacy
William Beveridge entered into the wedlock with Jessy Janet, daughter of William Phillip.
He breathed his last on March 16, 1963 at the age of 84. He was buried in Thockrington churchyard on the Northumbrian moors. Upon his death, his baronecy became extinct.
Recommended Lists:
Leaders #2742

See the events in life of William Beveridge in Chronological Order