Aurobindo Ghose, better known as Sri Aurobindo is known to the entire world as a great scholar, a national leader and a spiritual guru. He attained his basic as well as higher education from the United Kingdom. His literary excellence had been exemplary and brought him innumerable acclaims. He returned to India as a civil servant to the ‘Maharaja of State of Baroda’. Sri Aurobindo’s participation in the Indian national movement was short but impactful. His writings promoted the idea of complete independence for India thereby landing him in jail for political unrest. He came to limelight with his active participation in the freedom struggle against the British in India but he gradually evolved to become a spiritual and yogic guru. Some powerful visions backed by spiritualism encouraged him to move to Pondicherry where he worked on human evolution through spiritual activities such as ‘Integral Yoga’. Having chosen the mystical path for the rest of his life, he collaborated with people with similar pursuits. Indian Celebrities
Philosophers
Indian Men
Leo Poets
Leo Writers
Childhood & Early Life
Aurobindo Ghose was born on August 15, 1872 to Krishna Dhun Ghose, and his wife Swarnalotta Devi in Kolkata (Bengal Presidency), India.
His father, who was an Assistant Surgeon in Rangapur, Bengal, was an ardent fan of the British culture so he encouraged his children to learn English and study in schools where his children would be exposed to Christianity. He was sent to Loreto House boarding school with his male siblings in Darjeeling, the hub of British Culture in India.
Aurobindo’s inclinations to social reforms and evolutions can be attributed to his great-grandfather’s close involvement in the Brahmo Samaj religious reform Movement
At a tender age of seven he was sent to England and stayed there for fourteen years.
Starting from St. Pauls School (1884), he attained scholarship and made it to King’s College, Cambridge (1890). His dedication and sharp intellect helped him clear the Indian Civil Service exam too. 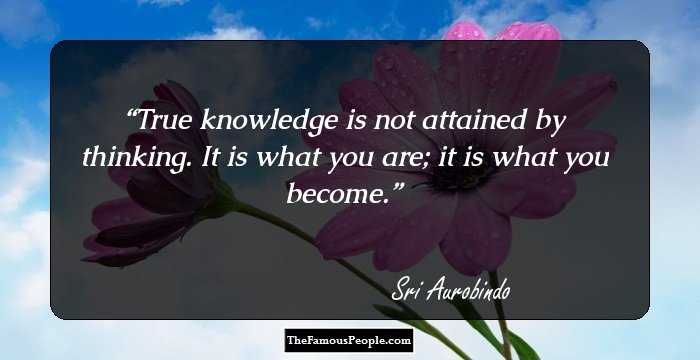 Quotes: You
Continue Reading Below
Return to India
Aurobindo Ghose came back to India in 1893 after getting a job with the royal family of Baroda (Gaekwad). He was fluent with many foreign languages but less familiar with Indian culture.
He spent twelve years in Baroda serving as a teacher, secretary to the Maharaja of Gaekwad and also the Vice Principal of Baroda College thereby becoming more familiar with his mother tongue and Indian traditions.
It was only after staying in India for twelve long years that Aurobindo could understand the harm that the British rule had done to the Indian civilization and he slowly and gradually started showing interest in politics. 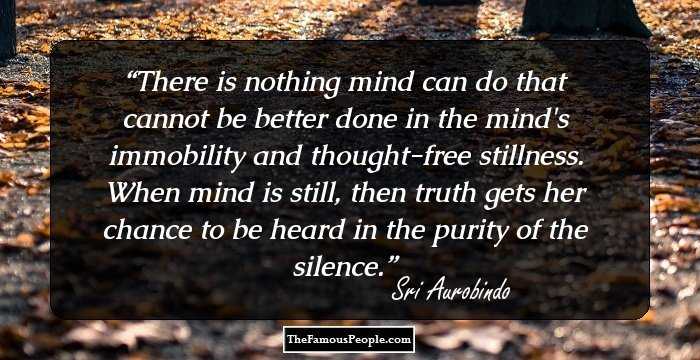 Role in the Indian freedom Struggle
His initial political activism involved emphasis on the urgency of demanding total freedom from the British government.
While in the services of the Baroda administration, he contributed articles to ‘Indu Prakash’ and covertly got in touch with resistance groups in Bengal and Madhya Pradesh
He finally moved to Kolkata in the year 1906 after the announcement of the partition of Bengal. Publicly, Aurobindo supported non-co-operation and passive resistance to the British rule but in private he was involved in secret revolutionary activities and helped build the revolutionary atmosphere in the country.
In Bengal, he got in touch with revolutionaries and inspired young revolutionaries such as Bagha Jatin, Jatin Banerjee and Surendranath Tagore. He was also instrumental in the formation of several youth clubs including the Anushilan Samiti.
In 1906, he participated in the Indian National Congress annual session, which was headed by Dadabhai Naoroji. He helped in building the fourfold objectives of the national movement - Swaraj, Swadesh, Boycott and national education. He started a daily newspaper Bande Mataram in 1907.
Continue Reading Below
In 1907, the congress split due to a showdown between moderates and extremists. Aurobindo sided with extremists and supported Bal Gangadhar Tilak. After this, he travelled extensively across Pune, Baroda and Bombay to educate people and get support for national movement.
In May 1908, the British arrested him in connection with the Alipore Bomb Case. He was subsequently released after one year of solitary confinement.
Post his release in 1909, he started new publications - Karmayogin (English) and Dharma (Bengali).
While in Alipore jail, he slowly realized that he was not destined to lead the freedom struggle and gradually diverted to mystical and philosophical way of life thereby initiating this new journey of spiritual awakening.
In April 1910, Aurobindo Ghoseh secretly moved to Pondicherry (which was then a French Colony) to start a new life.
In Pondicherry, Sri Aurobindo set himself on a path of spiritual learning and evolution by practicing secluded yoga continuously for four years which he termed as ‘Integral Yoga’. He proposed the importance of spiritual practices in human transformation into a divine entity.
Politics to Spiritualism
During the Alipore Bomb Case, he was kept in confinement in Alipore Jail. It was during this period that his view of life radically changed due to spiritual experiences and realizations.
Aurobindo said that he constantly heard the voice of Vivekananda speaking to him for almost a fortnight in the jail and from there began a new journey towards spiritualism.
After settling in Pondicherry, he dedicated himself to his spiritual and philosophical pursuits. In 1914, he started a monthly philosophical magazine ‘Arya’.
Continue Reading Below
Slowly and gradually Sri Aurobindo began to attract followers and the number kept increasing, resulting in the formation of Sri Aurobindo Ashram in 1926.
Apart from yoga and spirituality, he also wrote about the Indian culture, Vedas and society through The Foundations of Indian Culture, The Secret of the Veda, The Human Cycle etc.
Sri Aurobindo had a flair for poetry even at the time he was settled in England. His poetic inclinations revived in 1930s and took shape of a great piece of literature, Savitri: a poem of 24000 lines and purely resting on spirituality.
He was nominated for the Nobel Prize in Literature (1943) and Nobel Prize for Peace (1950) for his innumerable contributions in the field of poetry, spiritualism and philosophical literature. 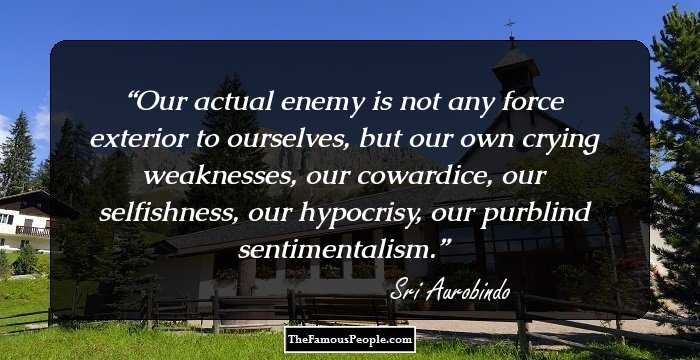 Sri Aurobindo Ashram
He started his journey in Pondicherry with a few followers, but that increased rapidly and ultimately led to the establishment of Sri Aurobindo Ashram in 1926.
After the establishment of the Ashram, he began using Sri before his name, meaning sacred in Sanskrit.
The foundation of the Ashram was laid with the help of Mirra Richard (a French national and the spiritual collaborator of Aurobindo Ghoseh) who came to Pondicherry in 1914.
Mirra Richard d took charge of the management of Ashram after he went into seclusion in 1926. She began to be known as ‘The Mother’ and was considered and equal to Aurobindo in spiritual wisdom and knowledge.
Personal Life & Legacy
At the age of 28, Aurobindo Ghosee married Mrinalini, daughter of Bhupal Chandra Bose, a senior government official, in 1901.
Mrinalini died in December 1918 during the influenza pandemic.
Sri Aurobindo passed away on December 5, 1950.
His philosophical as well political works were appreciated by the then Prime Minister Jawaharlal Nehru and the then President Rajendra Prasad.
Recommended Lists:
Spiritual & Religious Leaders #27
Intellectuals & Academics #752

Quotes By Sri Aurobindo | Quote Of The Day | Top 100 Quotes

See the events in life of Sri Aurobindo in Chronological Order