Sarojini Naidu (née Sarojini Chattopadhyay) was an Indian poet and political activist best known for being the first female president of the India National Congress. She was also the first woman to be appointed an Indian state governor. The daughter of an educationist and social reformer, she was exposed to revolutionary ideas from a young age. Her family supported her artistic and literary pursuits as well, and she received a good education, a rarity for an Indian woman of her era. As a young woman, she joined the Indian nationalist movement and supported Mahatma Gandhi’s nonviolent resistance against British rule. She was jailed by the British numerous times. Also a feminist, she helped establish the Women's Indian Association. Following India’s independence, she became the governor of the United Provinces (present-day Uttar Pradesh) and held this post until her death. Alongside her active participation in India’s independence movement, she also had a brilliant career as a writer and poet. She was an elected fellow of the Royal Society of Literature and was fondly called Bharat Kokila or the Nightingale of India by Mahatma Gandhi. She was married to a physician and had four children, including Padmaja Naidu, who was also a part of the Quit India Movement. Sarojini Naidu was born as Sarojini Chattopadhyay on 13 February 1879, in Hyderabad, to a Bengali Brahmin family. Her parents were Aghorenath Chattopadhyay and Varada Sundari Debi. She had five younger siblings.

Her father was an educationist and social reformer who later became the principal of Nizam College. Her mother composed Bengali poetry. One of her brothers grew up to become a revolutionary while another became a popular poet and dramatist.

Her family was a progressive one, where the children were exposed to revolutionary ideals and encouraged to pursue their passions. The young Sarojini thrived in the intellectual environment of her home.

She was an excellent student and passed her matriculation examination in 1891, at the age of 12. She then entered the University of Madras, following which she went to England to study at King's College, London, and then Girton College, Cambridge. She met many intellectuals and artists in England. 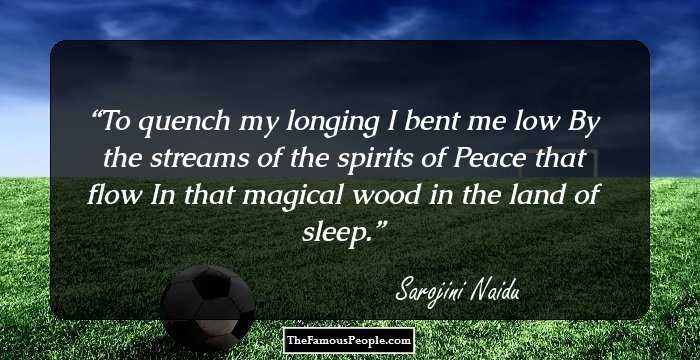 Quotes: Me, Peace, I
Continue Reading Below
Political Career

Sarojini returned to India in 1898 and married Govindarajulu Naidu, thus becoming Sarojini Naidu. During this time, she became involved in India's struggle for independence from colonial rule.

Blessed with brilliant oratory skills, she promoted the cause of Indian independence in many of her speeches. In 1906, she addressed the Indian National Congress and the Indian Social Conference in erstwhile Calcutta.

She met Mahatma Gandhi in 1914 and was inspired by him to commit herself to political activism. She also became acquainted with social reformers Gopal Krishna Gokhale, Sarala Devi Chaudhurani, and Rabindranath Tagore.

Inspired by Gandhi's movement of nonviolent resistance against British rule, she joined his satyagraha. She travelled to London in 1919 as a member of the All India Home Rule League to advocate for India’s freedom from colonial rule.

In 1925, she was made the first female president of the Indian National Congress. A couple of years later, she became a founding member of the All India Women's Conference.

Sarojini Naidu travelled a lot in the late 1920s, promoting the cause of Indian independence. She advocated for nonviolent resistance in the United States in 1928 and presided over East African and Indian Congress’ session in South Africa the following year.

In 1930, Sarojini Naidu and a few other women activists, including Khurshed Naoroji and Kamaladevi Chattopadhyay, joined Gandhi’s Salt March despite his initial reluctance to allow women to join the march. Following Gandhi’s arrest on April 6, 1930, Sarojini Naidu took over as the new leader of the campaign.

She was imprisoned multiple times by the British due to her nationalist activities. She was imprisoned for 21 months following her arrest in 1942 for her participation in the Quit India Movement. She had been jailed many times before this as well.

India gained independence from British rule in 1947. Sarojini Naidu was appointed the governor of the United Provinces (present-day Uttar Pradesh) in the newly-independent nation. She was India's first woman governor. She remained in this post until her death. 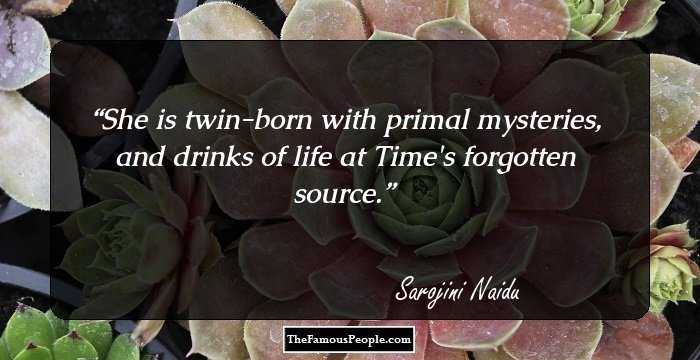 Sarojini Naidu developed an early love for writing. She mostly composed poetry in English, usually in the form of lyrical poetry, across the genres of children’s poetry, romance, patriotism, and tragedy.

Her writing style was rich with vivid sensory images. Her first book of poems, titled The Golden Threshold was published in London in 1905.

She gained much acclaim as a poet when her second book of poems, The Bird of Time, came out in 1912. This collection includes the poem In the Bazaars of Hyderabad which became her most popular poem.

Her book, The Broken Wing,” published in 1927, was the last collection of new poems released in her lifetime. This book, which includes the poems, The Gift of India and Awake, was dedicated to Muhammad Ali Jinnah.

As a poet, Sarojini Naidu was much respected and known as the Indian Yeats and Nightingale of India.

A collection of all her poems, including formerly unpublished ones, was published posthumously in 1961. Titled The Feather of the Dawn, the book was edited by her daughter Padmaja Naidu.

Sarojini Naidu became acquainted with the medical doctor and social reformer Muthulakshmi Reddy in 1909. The two women shared several beliefs and worked together to help establish the Women's Indian Association in 1917.

Sarojini Naidu also had close ties with British socialist and women’s rights activist Annie Besant. When Besant was serving as the president of the Home Rule League and Women's Indian Association, Naidu accompanied her to advocate universal suffrage in front of the Joint Select Committee in London, the United Kingdom.

As a young woman, Sarojini fell in love with Govindarajulu Naidu, a general physician. Her progressive family fully supported the alliance even though Govindarajulu belonged to a different caste. The couple got married in 1898. Their inter-caste marriage was considered “scandalous” by the society at large.

They had a long and happy marriage that produced four children, including daughter Padmaja, who also grew up to be a freedom fighter and political activist.

Sarojini Naidu suffered a cardiac arrest and died on 2 March 1949, at the Government House in Lucknow. She had been unwell for a few weeks preceding her death.

See the events in life of Sarojini Naidu in Chronological Order