Amrita Pritam, the young poet who emotively invoked Waris Shah in what would become her best known poem, ‘Ajj aakhaan Waris Shah nu’, was one of the foremost women writers in 20th century India. Pritam, who wrote in Punjabi and Hindi, was a bold and courageous woman who lived life on her own terms unlike the more subjugated women of her time. A prolific writer, she produced over 100 books including poetry collections, fictions, biographies and essays. Born in undivided India in 1919, she witnessed the horrors of the partition as a young woman, an experience that shook her to the core and shattered her soul. It was in the aftermath of the terrible experience that she expressed her anguish in the poem ‘Ajj aakhaan Waris Shah nu’, reflecting the sense of hopelessness, terror and sadness that swept over everyone who had witnessed the partition. Her experiences during the partition also inspired her to write the novel ‘Pinjar’ in which she addressed the helplessness faced by the women of her time. Through her poignant writings she became a voice for women in Punjabi literature and the leading 20th-century poet of the Punjabi language. Her works have been translated into several Indian and foreign language. Kumar Vishwas
Poets #285
Novelists #612
Essayists #100
DID WE MISS SOMEONE?
CLICK HERE AND TELL US
WE'LL MAKE SURE
THEY'RE HERE A.S.A.P
Quick Facts

Indian Celebrities
Essayists
Indian Women
Virgo Poets
Women Poets
Childhood & Early Life
She was born as Amrita Kaur on 31 August 1919, in Gujranwala, Punjab in undivided British India. She was the only child of Kartar Singh and Raj Bibi, a Sikh couple. Her father was a school teacher and a poet. She grew up in a spiritual environment and inherited her love for writing from her father.
Her family was very religious as her father was also a “pracharak”—a preacher of the Sikh religion. Her orthodox grandmother used separate sets of utensils to serve Hindus and Muslims. From a young age Amrita was a critical thinker and opposed such practices.
Tragedy struck her family when her mother died when Amrita was just 11 years old. The little girl had prayed desperately to God to save her mother and stopped praying when her mother died in spite of her prayers.
She moved to Lahore with her father and found herself overburdened with household chores. She felt very sad and lonely and sought solace in writing.
Her first anthology of poems ‘Amrit Lehran’ (Immortal Waves) was published in 1936 when she was 16 years old. She also got married around this time and changed her name to Amrita Pritam. 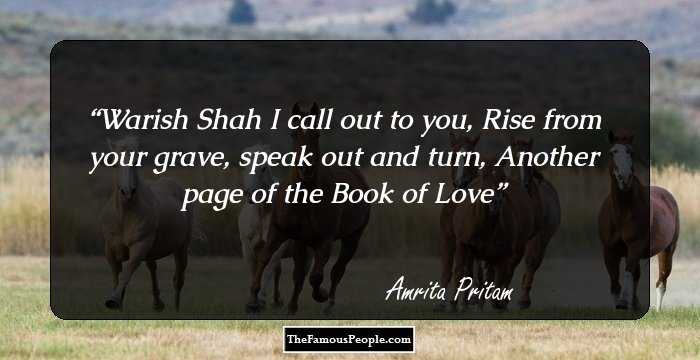 The Most Popular US Veterans
Career
Once she started writing in 1936, she prolifically continued composing several poems and had published six collections of poems by 1943.
Initially she used to write romantic poems though she gradually became attracted to the Progressive Writers’ Movement, a literary movement in the pre-partition British India and became a part of it.
In 1944, her poetry collection ‘Lok Peed’ (People’s Anguish) was published in which she criticized the war-torn economy in the aftermath of the Bengal famine of 1943. She was developing into a bold writer who expressed herself freely without any fear of the consequences.
She became involved in social work in the mid-1940s and worked with the Lahore Radio Station for a while.
She witnessed unspeakable horrors in front of her eyes when the partition of India took place in 1947. More than one million people—Muslims, Sikhs, and Hindus—died horrible deaths in the communal riots. Amrita, a young woman of 28 somehow escaped getting killed, but her soul was shattered in the experience.
Being a Punjabi refugee she moved to New Delhi from Lahore and struggled to rebuild her life. Stuck in a meaningless marriage, weary of heart and pregnant, she poured out her feeling in the form of the poem ‘Ajj akhaan Waris Shah nu’ in 1948, invoking the Sufi poet Waris Shah.
In 1950, she wrote the novel ‘Pinjar’ (Skeleton) in which she wrote of the plight of the women during the partition. The novel describes the helplessness felt by the women of that era when subjected to indifference at the hands of their own families. The novel was later adapted into an award winning Hindi film of the same name.
She worked in the Punjabi service of All India Radio, Delhi till 1961. It was during the 1960s that she clearly became more feminist in her writings. Her later works include ‘Kaal Chetna’ (Time Consciousness), ‘Agyat Ka Nimantran’ (Call of the Unknown), ‘Kala Gulab’ (Black Rose), ‘Rasidi Ticket’ (The Revenue Stamp), and ‘Aksharon kay Saayee’ (Shadows of Words).
Major Works
Her most famous novel is ‘Pinjar’ (Skeleton), a Punjabi novel which tells the story of a Hindu girl, Puro who is abducted by a Muslim boy and denounced by her own family when she escapes and returns to them. This work established her as a voice for the women who suffered immeasurable hardships during the partition.
Awards & Achievements
In 1956 the Sahitya Akademi Award was conferred upon her for ‘Sunehey’ (Messages).
One of India’s highest literary awards, the Bhartiya Jnanpith Award was given to her in 1982 for ‘Kagaj te Canvas’ (Paper and Canvas).
She is also the recipient of the Padma Vibhushan, India’s second highest civilian award, in 2004.
Personal Life & Legacy
She was betrothed in childhood to Pritam Singh, the son of a hosiery merchant. He grew up to be an editor and they were married in 1936. The couple had two children. The marriage was a troubled one and she left her husband in 1960.
She was said to have been in love with the poet Sahir Ludhianvi and had written about him in her autobiography, ‘Rasidi Ticket’ (Revenue Stamp).
She developed a long term relationship with the famous artist and writer Imroz with whom she lived for the last 40 years of her life.
She died on 31 October 2005 after a long illness.
Recommended Lists:
Writers #2111
You May Like

See the events in life of Amrita Pritam in Chronological Order