Advanced Search
Amartya Sen is a much-admired, award winning economist, writer and philosopher. A voice of the poor and malnourished, tirelessly engrossed in the problems of the society’s poorest people, he has devised practical solutions to prevent food shortage and starvation. This Nobel laureate has helped create the United Nations Human Development Index and was featured on Time Magazine’s list of ‘World's 50 Most Influential People Who Matter’. A leading intellectual, Sen’s books have been translated in more than thirty languages across the world. Some of his noteworthy publications include, ‘Development as Freedom’, ‘Poverty and Famines: An Essay on Entitlements and Deprivation’, ‘On Economic Inequality’, ‘Inequality Reexamined’, ‘The Argumentative Indian’ and ‘The Idea of Justice’. Currently a Professor of Economics and Philosophy at Harvard University, Sen has also been a Professor at the London School of Economics and The University of Oxford. He has won an array of laurels including the Bharat Ratna, the highest civilian award in India. Committed sincerely to the cause of ending poverty and deprivation, this celebrated economist, is the sixth Indian to receive a Nobel and the first Asian recipient of the Economics Prize. To learn more interesting facts about his childhood, personal life and achievements in the field of writing and academics, scroll down and continue to read this biography. Sarvepalli Radh...
DID WE MISS SOMEONE?
CLICK HERE AND TELL US
WE'LL MAKE SURE
THEY'RE HERE A.S.A.P
Quick Facts

Indian People
Philosophers
Indian Men
University Of Calcutta
Trinity College, Cambridge
Childhood & Early Life
Amartya Sen was born in Santiniketan, West Bengal, India to Ashutosh Sen, a Professor, who later served as the Chairman of the West Bengal Public Service Commission, and Amita Sen.
In 1941, he was enrolled at the St Gregory's School, Dhaka and after the partition of India, his family moved to India, where he attended the Visva-Bharati University School.
In 1953, he graduated from Presidency College, Kolkata with a First Class Honours in B.A Economics. That year, he attended Trinity College, Cambridge, where he earned another B.A.
In 1956, at the age of 23, he was appointed as the Professor and head of the Economics Department at the Jadavpur University, Calcutta. After two years, he went back to Cambridge University to pursue his Ph.D.
In 1959, he submitted his Ph.D. thesis titled ‘the choice of techniques’, after which he was a visiting Professor at Massachusetts Institute of Technology.
From 1961 to 1972, he was a Professor at the Delhi School of Economics, after which he was a Professor of Economics at the London School of Economics. He also taught at the University of Calcutta. 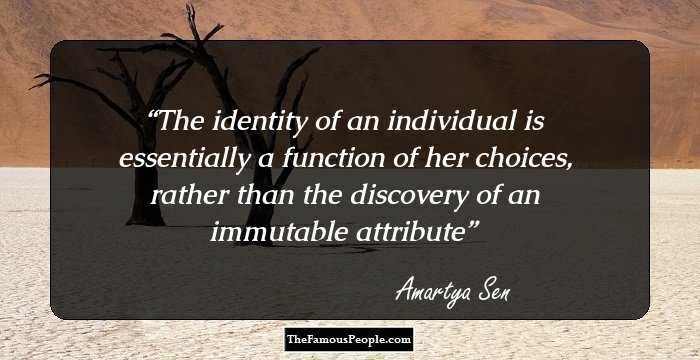 Continue Reading Below
Career
In 1970, his first book titled ‘Collective Choice and Social Welfare’, which is considered as one of his most influential monographs that addressed the issues of basic welfare, justice, equality and individual rights.
Published in the year 1973, his book ‘On Economic Inequality’, was a study of the theory of welfare economics in relation to the study of economic inequality.
His 1982 essay, ‘Poverty and Famines: An Essay on Entitlements and Deprivation’, highlighted the cause of lack of food supply, malnutrition and an analysis of famines.
In 1984, his work development economies, ‘Resources, Values, and Development’ was published. The publication focussed on the investment design, shadow rating, employment policy, and welfare economics.
His 1987 publication ‘On Ethics and Economics’, was a critical piece of writing that argued that welfare economics and modern ethical studies can benefit from each other.
In 1990, he authored a controversial essay for the The New York Review of Books, titled ‘More Than 100 Million Women Are Missing’. The essay throws light on the gender imbalance and the reasons for it.
In 1992, his book ‘Inequality Reexamined’ was published by the Harvard University Press. The book examined the notion of inequality and focussed mainly on the ‘capability approach’.
In 1998, his Nobel Prize Lecture publication titled ‘The Possibility of Social Choice’, in which he declared that welfare economics was a core theme in social change theory.
In 1999, he came out with the publication titled ‘Development as Freedom’, in the book he focussed on the concept of ‘international development’ and ‘developmental economics’.
Continue Reading Below
In 2002, he came out with his book titled ‘Rationality and Freedom’, which is divided into two volumes on rationality, freedom, and justice. He brings a clear, clarified insight into each of these concepts.
In 2005, his popular book, ‘The Argumentative Indian’ was published. The book is a collection of essays on history and identity of India and the need to understand contemporary India and its argumentative tradition.
In 2009, his book ‘The Idea of Justice’ was published by Allen Lane and Harvard University Press. The book was a highlight on economic reasoning and a critique of John Rawls book, ‘A Theory of Justice’.
In his 2011 publication, ‘Peace and Democratic Society’, he explores the relationship between violence, peace and democracy. He delves into the concept of ‘organised violence’ and war, genocide and terrorism.
He is currently working as a Professor of Economics and Philosophy at Harvard University and also the Thomas W. Lamont University Professor. 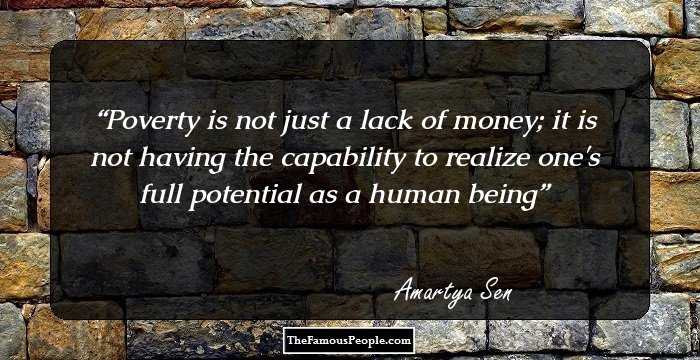 Major Works
His publication ‘Development as Freedom’ was recognised by the Nobel Prize committee as an important contribution in the field of economic development theory.
One of his seminal 1992 works ‘Inequality Reexamined’, is an acclaimed book that brought together all the important themes of his work from over a decade. In this book he addresses some of the most important concerns of inequality.
Awards & Achievements
In 1954, he was awarded the Adam Smith Prize.
In 1998, he was the recipient of the Nobel Memorial Prize in Economic Sciences that he received for his contribution to the field of ‘welfare economics’.
In 1999, he was awarded the Bharat Ratna, which is ‘the highest civilian award in India'.
In 2011, he was awarded National Humanities Medal. 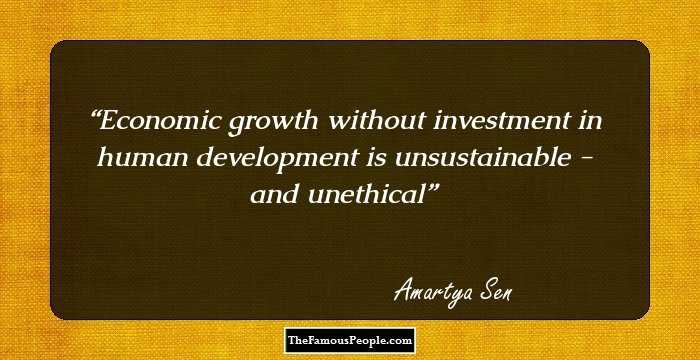 Personal Life & Legacy
His first wife was Nabaneeta Dev Sen with whom he had two children, Antara Sen and Nandana Sen. The marriage ended in 1971.
In 1973, he married Eva Colorni and they had two children together. She died of stomach cancer in 1985.
In 1991, he married Emma Georgina Rothschild. The couple often vacation in their Cambridge home in Massachusetts.
Trivia
This admired Indian Bharat Ratna awardee and writer has been a permanent resident of the U.S for almost 50 years but choose to retain only his Indian citizenship.

Quotes By Amartya Sen | Quote Of The Day | Top 100 Quotes

See the events in life of Amartya Sen in Chronological Order