Mohandas Karamchand Gandhi was an Indian lawyer who became the primary leader of India's independence movement. Better known as Mahatma Gandhi, he not only led India to independence from British rule but also inspired movements for civil rights and freedom across the world in several other countries. Best remembered for his employment of nonviolent means of civil disobedience, he led Indians in the Dandi Salt March to protest against the British-imposed salt tax and launched the Quit India Movement, a mass protest demanding "an orderly British withdrawal" from India. Born into a religious family in British India, he was raised by parents who emphasized on religious tolerance, simplicity and strong moral values. As a young man he went to England to study law and later started working in South Africa. There he witnessed rampant acts of racism and discrimination which angered him greatly. He spent over two decades in South Africa over the period of which he developed a strong sense of social justice, and led several social campaigns. Upon his return to India he became active in the Indian Independence Movement, ultimately leading his motherland to independence from the British rule. He was also a social activist who campaigned for women’s rights, religious tolerance, and reduction of poverty. Subhas Chandra ...
DID WE MISS SOMEONE?
CLICK HERE AND TELL US
WE'LL MAKE SURE
THEY'RE HERE A.S.A.P
Quick Facts

Indian Celebrities
Revolutionaries
Political Leaders
Indian Men
University College London
Childhood & Early Life
Mohandas Karamchand Gandhi was born on 2 October 1869 to a Hindu Modh Baniya family in Porbandar, then part of Kathiawar Agency, in British Indian Empire. His father Karamchand Uttamchand Gandhi worked as the diwan (chief minister) of Porbandar state. His mother Putlibai was Karamchand’s fourth wife. Mohandas had two elder half-sisters and three elder siblings.
His mother was an extremely religious lady who had a great influence on the young Mohandas. However as he grew up, he developed a rebellious streak and defied many of his family norms. He started drinking alcohol and eating meat which were activities strictly prohibited in his traditional Hindu family.
He was a mediocre student in school though he occasionally won prizes and scholarships. He passed the matriculation examination of the University of Bombay in 1887 and enrolled at the Samaldas College in Bhavnagar.
In 1888, he received the opportunity to study law at the Inner Temple in London. Thus he left the Samaldas College and sailed to England in August. There he studied law and jurisprudence with the intention of becoming a barrister.
While in England he was once again drawn towards his childhood values which he had renounced as a teenager. He became involved with the vegetarian movement and met members of the Theosophical Society who kindled his interest in religion.
He completed his studies successfully and was called to the bar in June 1891. He then returned to India. 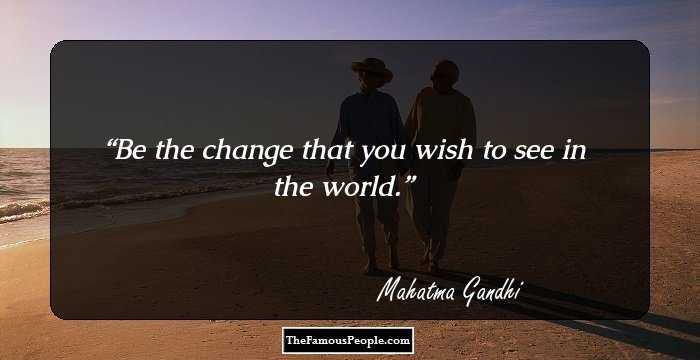 Quotes: You, Change
Continue Reading Below
Years in South Africa
He struggled professionally for the next two years before accepting a contract from Dada Abdulla & Co., an Indian firm, to a post in the Colony of Natal, South Africa, a part of the British Empire, in 1893.
The years spent in South Africa proved to be a profound spiritual and political experience for Gandhi. There he witnessed situations he had no idea about previously. He, along with all the other colored people were subjected to rampant discrimination.
Once he was asked to move from the first-class in a train in spite of having a valid ticket solely on the basis of his color, and another time he was asked to remove his turban. He refused both the times.
These incidents angered him and kindled in him the spirit to fight for social justice. Even though his original job contract with Dada Abdulla & Co. was just for one year, he extended his stay in the country in order to fight for the rights of people of Indian descent. He spent over 20 years in the country during which he helped found the Natal Indian Congress which aimed at molding the Indian community of South Africa into a unified political force. 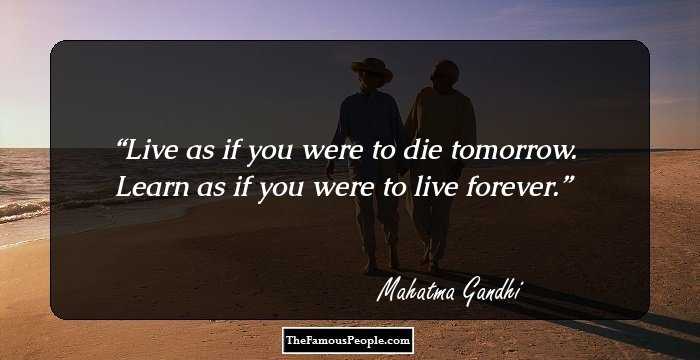 Quotes: You
Return to India & Non Co-operation Movement
Mohandas Gandhi had gained a reputation as a fearless civil rights activist while In South Africa. Gopal Krishna Gokhale, a senior leader of the Indian National Congress, asked Gandhi to return to India and join the others in India’s struggle for freedom.
Gandhi returned to India in 1915. He joined the Indian National Congress and by 1920 established himself as a dominant figure in the Indian political scenario. He was a strict adherent to the principle of non-violence and believed that non-violent civil disobedience measures were the best means to protest against the British rule.
He called for all the Indians to unite as one irrespective of the divisions of religion, caste and creed in the country’s fight for independence. He advocated non co-operation with British rule, which included a boycott of British goods in favor of Indian made products. He also called for the boycott of British educational institutions and prompted Indians to resign from government employment.
The non co-operation movement gained widespread mass appeal all over India which greatly agitated the British. Gandhi was arrested, tried for sedition, and imprisoned for two years (1922-24).
Continue Reading Below
Salt Satyagraha
In the late 1920s the British government appointed a new constitutional reform commission under Sir John Simon but did not include any Indian as its member. This infuriated Gandhi who pushed through a resolution at the Calcutta Congress in December 1928 demanding the British government to grant India dominion status or face another non co-operation campaign aimed at attaining complete independence for the country.
The British did not respond and thus the Indian National Congress decided to declare the independence of India—the Purna Swaraj. On 31 December 1929, the flag of India was unfurled at the Lahore session of the Indian National Congress and the independence of India was declared. The Congress called on to the citizens to pledge themselves to civil disobedience until India attained complete independence.
During that time, the British’s Salt Laws which prohibited Indians from collecting and selling salt and forced them to pay for heavily taxed British salt were in place. Gandhi launched the Salt March, a non-violent protest against the British-imposed tax on salt in March 1930.
He led a march of 388 kilometers (241 miles) from Ahmedabad to Dandi, Gujarat to make salt himself. He was joined by thousands of followers in this symbolic act of defiance against British rule. This led to his arrest and imprisonment along with over 60,000 of his followers. He continued playing an active role in the independence movement post his release. 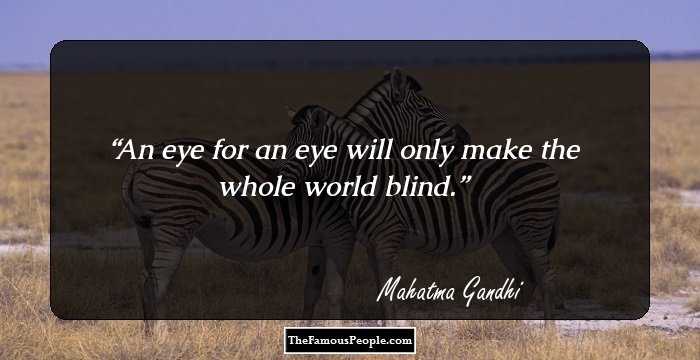 Quotes: Will
Quit India Movement
The nationalist movement had gained much momentum by the time the World War II broke out in 1939. In the midst of the war, Gandhi launched another civil disobedience campaign, the Quit India Movement, demanding "an orderly British withdrawal" from India.
He gave a speech launching the movement on August 8, 1942, calling for determined, but passive resistance. Even though the movement received massive support, he also faced criticism from both pro-British and anti-British political groups. He was criticized for his strict refusal to support Britain in World War II, as some felt that it was unethical to not support Britain in its struggle against Nazi Germany.
Despite the criticism, Mahatma Gandhi remained steadfast in his adherence to the principle of non- violence and called on all Indians to maintain disciple in their struggle for ultimate freedom. Within hours of his powerful speech, Gandhi and the entire Congress Working Committee were arrested by the British. He was imprisoned for two years and released before the end of the war in May 1944.
The Quit India Movement became the most forceful movement in the history of the Indian independence struggle and is believed to have played a major role in securing the independence of India in 1947.
Continue Reading Below
Indian Independence & Partition
While the Indian National Congress and Gandhi called for the British to quit India, the Muslim League passed a resolution for them to divide and quit. Gandhi was opposed to the concept of partition as it contradicted his vision of religious unity.
Gandhi suggested that the Congress and Muslim League co-operate and attain independence under a provisional government, and decide about the question of partition later on. Gandhi was deeply troubled by the thought of partition and personally tried his best to unite Indians belonging to different religions and communities.
When the Muslim League called for the Direct Action Day on 16 August 1946, it led to widespread riot and manslaughter between Hindus and Muslims in the city of Calcutta. Distraught, Gandhi personally visited the most riot-prone areas and tried to stop the massacres. In spite of his best efforts, the Direct Action Day marked the worst communal riots that British India had seen and set off a series of riots elsewhere in the country.
When independence was finally achieved on 15 August 1947, it also saw the formation of the two new dominions of India and Pakistan following the Partition of India in which more than half a million lost their lives and 14 million Hindus, Sikhs and Muslims were displaced.
Awards & Achievements
Rabindranath Tagore, a great Indian polymath, accorded the title of “Mahatma” (meaning “high-souled" or “venerable" in Sanskrit), to Mohandas Karamchand Gandhi.
‘Time’ magazine named Gandhi the Man of the Year in 1930.
Gandhi was nominated for the Nobel Peace Prize five times between 1937 and 1948 though he was never awarded the prize. The Nobel Committee publicly declared its regret for the omission decades later.
Family & Personal Life
Mohandas Karamchand Gandhi wed Kasturbai Makhanji Kapadia in an arranged marriage in May 1883. He was 13 years old and Kasturbai was 14 years old at the time of their marriage. The marriage produced five children of whom four survived to adulthood. The names of his children were: Harilal, Manilal, Ramdas, and Devdas His wife too became a social activist in her own right later on.
Gandhi was a prolific writer and penned several books including the autobiographies ‘The Story of My Experiments with Truth’, ‘Satyagraha in South Africa’, and ‘Hind Swaraj or Indian Home Rule’.
Continue Reading Below
He was assassinated on 30 January 1948 by Nathuram Vinayak Godse, a militant Hindu nationalist activist who shot three bullets into Gandhi’s chest at point-blank range at the Birla House (now Gandhi Smriti) in New Delhi. Prior to his assassination, there had been five unsuccessful attempts to kill him.
Top 10 Facts You Did Not Know About Mahatma Gandhi
Mahatma Gandhi was nominated for the Nobel Peace prize five times and the committee regrets not giving him the prize to this day.
Gandhi believed that walking is the best exercise and walked around 18 km every day, for 40 years!
His civil disobedience movement which inspired thousands across the globe was itself inspired by a Briton, Henry Stephens Salt, who introduced Gandhi to the works of Henry David Thoreau which had a profound impact on his thinking.
Gandhi was responsible for the Civil Rights movement in 12 countries across four continents.
He spoke English with an Irish accent, for one of his first teachers was an Irishman.
While in South Africa, Gandhi promoted football in his non-violent campaigns and helped establish three football clubs in Durban, Pretoria and Johannesburg.
Apple co-founder Steve Jobs was a fan of Mahatma Gandhi and wore circular glasses as a tribute to the great man.
He corresponded with a lot of prominent personalities of his time including Leo Tolstoy, Einstein and Hitler.
Great Britain—the very country he fought against in India’s quest for independence—released a stamp in his honor in 1969.
The clothes he wore when he was shot are still preserved in Gandhi Museum, Madurai.
Recommended Lists:
Leaders #2
Lawyers & Judges #102

Quotes By Mahatma Gandhi | Quote Of The Day | Top 100 Quotes

See the events in life of Mahatma Gandhi in Chronological Order