Subhas Chandra Bose was an Indian nationalist. He is best known for his patriotism and efforts to free India from the clutches of the British rule. He is popular across the country for his bold statement, “Give me Blood and I will give you Freedom” which sums up his personality. Like many other Indian nationalist leaders, he envisioned an independent India. Though Bose’s ideology and philosophy did not match with that of Mahatma Gandhi and other ‘Indian National Congress’ leaders, his vision was just the same as any other nationalist hero. He is known for his political acumen and military knowledge. He is also remembered for his struggle, which he often referred to as a moral crusade. The founder of ‘Azad Hind Radio,’ ‘Azad Hind Fauj,’ and ‘Azad Hind Government,’ Bose made his intentions clear right from the very beginning. Though he did not achieve much success in his effort, his determination and hard work are nevertheless commendable. Interestingly, Clement Attlee, under whose prime-ministerial rule India gained independence, is said to have claimed that it was the Bose-led INA that weakened the very foundation of British troops and inspired the Royal Navy mutiny in 1946, leading the British to believe that they no longer were in a position to rule India. 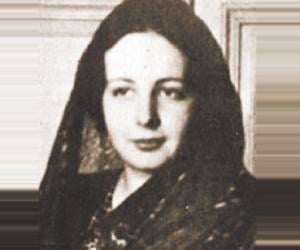 A brilliant student since childhood, Bose exceled in his studies, attaining an overall second position in the matriculation examination. He enrolled at the ‘Presidency College’ in 1911, but was expelled for assaulting Professor Oaten for making anti-India comments.

He then completed his graduation from ‘Scottish Church College’ at the ‘University of Calcutta,’ attaining a BA in philosophy in 1918. The following year, he gained admission into ‘Fitzwilliam College,’ Cambridge to appear for the ‘Indian Civil Services Examination’ (ICS).

As per his father’s wish, Bose cracked the examination and secured a job with the civil service department. However, he did not continue with his job for long as he never liked working under the British government.

Bose gave up his hard-earned, lucrative job and came back to India, where he joined the ‘Indian National Congress’ to fight for the independence of the nation. For the same, he started a newspaper called ‘Swaraj.’ Additionally, he even took charge of publicity for the Bengal Provincial Congress Committee.

Under the guidance and support of Chittaranjan Das, the spirit of nationalism grew by leaps and bounds within Bose. Soon, he secured the chair of the ‘President for the All India Youth Congress’ and served as the secretary for the ‘Bengal State Congress’ in 1923.

Bose also became the editor of a newspaper called ‘Forward,’ which was founded by Chittaranjan Das. He then qualified to the post of the CEO of ‘Calcutta Municipal Corporation.’

His nationalistic attitude and contribution towards the struggle for independence did not go well with the British. In 1925, he was sent to prison in Mandalay. 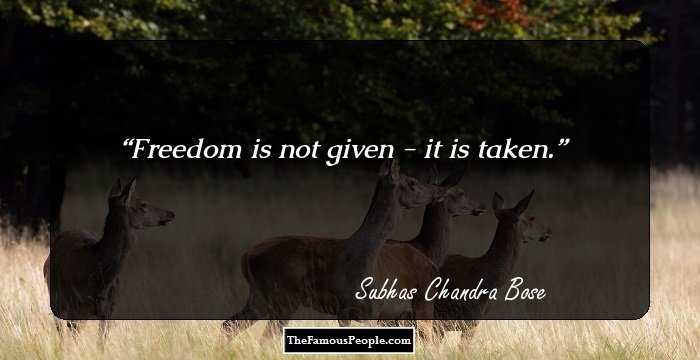 After being released from the prison in 1927, Bose began his full-fledged political career. He secured the position of the general secretary of the ‘Congress Party’ and started working alongside Jawaharlal Nehru.

Three years later, Bose became the mayor of Calcutta. In the mid-1930s, he traveled to Europe, visiting Indian students and European politicians, including Benito Mussolini.

Over the years, Bose gained so much popularity that he became a national leader. Also, his popularity and admiration won him a nomination to serve as a Congress president.

Clash of opinions caused a split in the ‘Indian National Congress,’ with Bose forming his own cabinet. In the 1939 Congress presidential elections, Bose defeated Pattabhi Sitaramayya (Gandhi’s chosen candidate), but could not continue his presidency for long as his belief system was totally different from that of the members of the ‘Congress Working Committee.’

After resigning as Congress president, Bose organized the ‘Forward Bloc’ on June 22, 1939. Though Bose greatly opposed the British, he was impressed by their systematic approach and steadfastly disciplinarian outlook towards life.

During ‘World War II,’ Bose advocated mass civil disobedience to protest against Viceroy Lord Linlithgow's decision to declare war on India's behalf without consulting the Congress leadership. This action of his cost him seven days of imprisonment and 40 days of house arrest.

On the 41st day of his house arrest, Bose disguised himself as a Maulavi and escaped from his house to reach Germany under an Italian passport with the name Orlando Mazzota. He reached Germany via Afghanistan, Soviet Union, Moscow, and Rome.

Under the guidance of Adam von Trott zu Solz, Bose founded the ‘Special Bureau for India,’ which was aired on the German-sponsored ‘Azad Hind Radio.’ He believed that an enemy’s enemy is a friend and thus sought the cooperation of Germany and Japan against the British.

Germany’s defeat in the war and the eventual retreat of the German army led Bose to believe that the German army was no longer in position to help India drive out the British from their motherland.

Devastated, Bose slipped out of Germany aboard a submarine to reach Japan in 1943.

Bose’s arrival at Singapore gave hopes of revival of the INA (Indian National Army), which was originally founded in 1942 by Captain General Mohan Singh and then headed by nationalist leader Rash Behari Bose. Rash Behari Bose handed complete control of the organization to Subhas Chandra Bose. The INA came to be known as the ‘Azad Hind Fauj.’ Subsequently, Subhas came to be known as ‘Netaji.’

Netaji not only re-organized the army troops but also attracted immense support from the emigrant Indians in Southeast Asia. Apart from enrolling themselves in the ‘Fauj,’ people began to lend financial support as well. The ‘Azad Hind Fauj’ also came up with a separate women unit, the first of its kind in Asia.

The ‘Azad Hind Fauj’ expanded considerably and started functioning under a provisional government, ‘Azad Hind Government.’ They had their own postage stamps, currency, courts, and civil codes and were recognized by nine Axis states.

It was in 1944 that Netaji gave his motivational speech where he asked his people to give him blood and promised the freedom of the country in return. Inspired by the highly provocative words, people joined him in large numbers for his fight against the British rule.

With Netaji as the chief commander of the ‘Azad Hind Fauj,’ the army proceeded towards India to liberate the country from the British rule. En-route to India, the army freed the Andaman and Nicobar Islands and named the islands as ‘Swaraj’ and ‘Shaheed.’ Rangoon became the new base camp for the army.

With their first commitment at the Burma front, the army fought a competitive battle against the British and managed to hoist the Indian national flag on the grounds of Imphal, Manipur.

However, the unanticipated counter-attack by the commonwealth forces took the Japanese and the German army by surprise who took retreat in Burma. The retreat and the fall of Rangoon base camp destroyed Bose’s dreams of becoming an effective political entity.

Undeterred by the fall and the defeat of the ‘Azad Hind Fauj,’ Netaji planned to travel to Russia to ask for help. However, he did not reach Russia as he met with an unfortunate accident that led to his death. 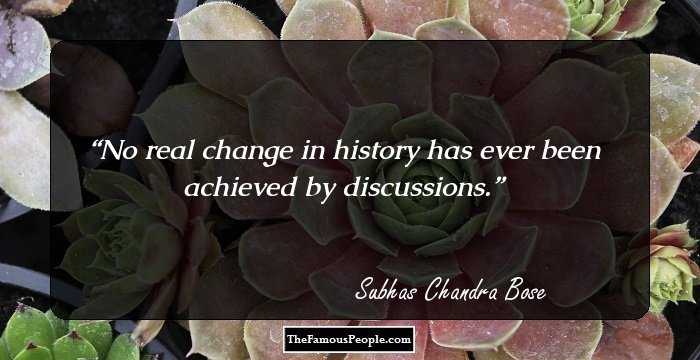 Netaji Subhas Chandra Bose was posthumously honored with a ‘Bharat Ratna’ award, India’s highest civilian award. However, the award was later withdrawn following a PIL, which was filed in a court, against the ‘posthumous’ nature of the award; the award committee could not produce substantial evidence proving Netaji’s demise.

A statue of Netaji has been erected in front of the West Bengal Legislative Assembly, while his photo can be seen on one of the walls of the Indian Parliament.

In recent times, he has been depicted in popular culture. There are various films that depict the story of this Indian nationalist hero.

Though disregarded by the members of the ‘Forward Bloc,’ Bose was said to have tied the knot with Emilie Schenkl, the daughter of an Austrian veterinarian, in the year 1937. The couple was blessed with a daughter named Anita Bose Pfaff in the year 1942.

On board a plane en-route to Russia on August 18, 1945, Netaji met with an unfortunate accident, which led to his death. The Japanese Army Air Force Mitsubishi Ki-21 bomber, which he was traveling in, experienced engine trouble and crashed at Taipei, Taiwan.

Bose, who suffered major injuries from the accident, was badly burnt. Though he was taken to the nearest hospital, he could not make it and left for the heavenly abode.

His body was cremated and a Buddhist memorial service was held at Nishi Honganji Temple in Taihoku. Later, his ashes were interred at the Renkoji Temple in Tokyo, Japan. 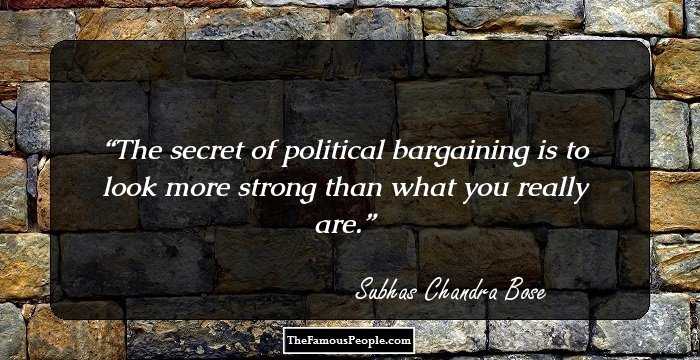 "Give me blood, and I shall give you freedom!" is one of the many famous quotes of this Indian nationalist leader during the struggle for independence. Other famous quotes include “Dilli Chalo,” “Ittehad, Etemad, Qurbani,” “Jai Hind,” and “Glory to India!”

He was the founder of the ‘All India Forward Bloc Party.’