Henry Cabot Lodge was an American politician and a distinguished Republican Senator. Born into one of the prominent New England political families, who made up the "Boston Brahmins", he had his education at Harvard, becoming one of the first persons to receive a doctorate in history from the same university. At the age of thirty, he began his career in politics as a Massachusetts legislator, eventually entering national politics as a member of House of Representative at 36. At 43, he was elected a senator from Massachusetts, serving in this capacity till his death, at the age of 74. Intelligent and informed, he served as the Chairman of number of important committees and introduced many bills, including the unsuccessful ‘Federal Elections Bill’, which sought to protect the voting rights of the African-Americans. However, he is best remembered for drafting the ‘Lodge Reservation’, which sought to protect the US interest in the League of Nations.
Continue Reading Below American Celebrities
American Men
Harvard University
Male Leaders
Taurus Leaders
Childhood & Early Life
Henry Cabot Lodge was born on May 12, 1850, in Beverly, a city located in the suburb of Boston, Massachusetts. His father, John Ellerton Lodge, a scion of the famous Lodge family, was a wealthy merchant, while his mother, Anna Lodge, came from the well-known Cabot family.
Born second of his parents’ three children, he had an elder sister named Elizabeth and a younger brother, Wilson Wesley.
At the age of five, he began his education at a private school run by his mother’s friend, Mrs. Parkman. Possibly in 1859, as the family moved to Beacon Street, he was admitted to a new private school, run by Thomas Russell Sullivan.
In the summer of 1860, while he was at Nathan, he witnessed the kidnapping of one of his classmates, Charles Allen Thorndike Rice. Though Henry was quite young, he not only identified the kidnappers, but also gave testimony, leading to their conviction.
In 1861, he entered Dixwell’s Latin School, run by Mr. Dixwell. Here, he studied for five years, preparing for college education and eventually joined Harvard College, where he was a member of Delta Kappa Epsilon, the Porcellian Club, and the Hasty Pudding Club.
In 1872, on graduating from Harvard College, he entered Harvard Law School, earning his law degree from there in 1874. Meanwhile in 1873, he became the assistant editor of North American Review, a position he continued to hold till 1876.
In 1875, he was admitted to the bar, and began practicing as an Associate at the law firm, Ropes and Grey Gray , remaining with it till 1880. Meanwhile in 1876, he received Ph.D. degree in history and government from Harvard, writing his thesis on the Germanic origins of Anglo-Saxon land law.
In 1876, soon after receiving his PhD, he joined Harvard University as a lecturer of American history, serving in this capacity till 1879. Although he later gave up his academic career, he retained an interest in this field throughout his life, writing and editing works on this subject. 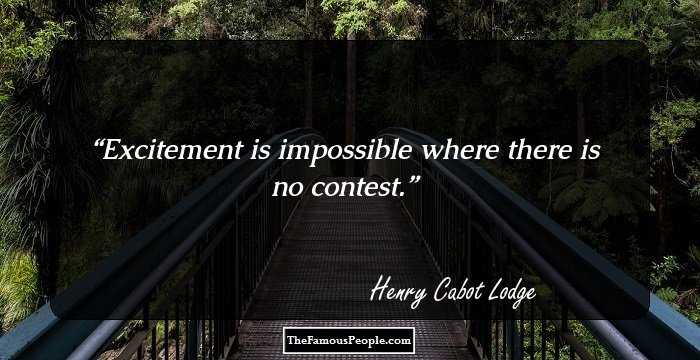 The Hottest Male Celebrities With The Best Abs
Political Career
In 1880, Henry Cabot Lodge began his political career as a member of the Massachusetts House of Representatives, winning the election on Republican ticket, serving in this capacity till 1882. Thereafter, he held various offices, attending the Republican National Convention during the 1884 presidential contest as part of a state delegation.
It was while attending the 1884 National Convention that he came to know Theodore Roosevelt, fellow Harvard graduate. Eventually the two young men became close friends, standing by the party at a time when many were deserting it. Lodge’s loyalty earned him ticket to the House of Representatives.
In March 1887, after two unsuccessful bids, he was elected to the House of Representatives, where he represented Massachusetts until March 1893. During this period, he not only cultivated the interest of his constituency assiduously, but also tried to promote the national interest as best as he could.
He was a strong supporter of civil service reform, protective tariff, and strong currency. He also worked to ensure voting rights for the colored people, co-drafting the 'Federal Election Bill' in 1890. Helping in drafting the momentous Sherman Antitrust Act of 1890 was another of his achievement during this period.
He was a vocal proponent of immigration restriction. In 1891, he wrote articles against allowing unrestricted immigration from places like southern Italy, fearing that "the immigration of people removed from us in race and blood" was rising while immigration by "the races who have peopled the United States" was declining.
Senator
In 1893, Henry Cabot Lodge was elected to the Senate and soon establishing himself as a respected, although not always liked, spokesperson for his home state. Later, he also began talking on national issues, especially on foreign policy, serving as the Chairman of the Senate Foreign Relations Committee from 1919 to 1924.
He always believed that it was important for the USA to expand territorially in order to progress financially. In 1895, he endorsed President Grover Cleveland's line against Great Britain in the Venezuela crisis and also for the annexation of Hawaii as well Philippines in 1898.
In 1895, he became Chairman of the Committee on Immigration, holding the position till 1899. Meanwhile, he was also Chairman of Committee on Printing (1897-1899) and Committee on the Philippines (1899- 1911). In 1903, he was appointed as a member of the Alaskan Boundary Commissionm.
From 1913 to 1919, he was on the Committee of Private Land Claims. As the First World War broke out, he became a staunch advocate of US participation on the side of the Allied power. He even criticized President Wilson for inadequate military preparation.
In 1919, he dealt with the Treaty of Versailles as the unofficial Senate Majority Leader, wanting to join the League of Nations with reservations, drafting fourteen amendments to this effect. Also, from 1919 to 1924, he served as Chairman of the Senate Foreign Relations Committee.
In 1922, he was appointed as a delegate to the Washington Naval Conference (International Conference on the Limitation of Armaments). Same year in June, he introduced the Lodge-Fish Resolution, to illustrate American support for the British policy in Palestine.
Major Works
Henry Cabot Lodge is best remembered for drafting the ‘Lodge Reservation’. Consisting of fourteen amendments, it required United State to take prior approval of the Congress before following League of Nations’ decisions. However, he was overruled and the Treaty of Versailles was voted down in Senate.
Awards & Achievements
In 1878, Henry Cabot Lodge was elected a Fellow of the American Academy of Arts and Sciences.
In 1881, he was elected a member of the American Antiquarian Society.
Family Life & Legacy
In 1871, Henry Cabot Lodge married Anna "Nannie" Cabot Mills Davis, who was the daughter of Admiral Charles Henry Davis. They had three children: Constance Davis Lodge, George Cabot Lodge and John Ellerton Lodge.
On November 5, 1924, Lodge suffered a severe stroke while recovering from gallstones surgery. He died of it on 9 November 1924. He was then seventy-four years old. He was buried in the Mount Auburn Cemetery in Cambridge, Massachusetts
Mount Lodge, also named Boundary Peak 166, located in the Saint Elias Mountains on the USA-Canada border has been named after him.
Recommended Lists:
Leaders #1121
You May Like