Advanced Search
Edmund Husserl was a prominent German philosopher, known for founding the philosophical movement of phenomenology in the early 20th century. The movement was expanded later at the universities of Munich and Göttingen in Germany, by a group of his followers. The philosophy, which focused on the structures of consciousness and experience, later spread to the U.S. and France, among other places. Husserl redefined phenomenology as a transcendental-idealist philosophy. He was mainly interested in topics such as the philosophy of mathematics, ontology, epistemology, and intersubjectivity. Some of his notable ideas, besides phenomenology, were transcendental subjectivism, phenomenological reduction, eidetic reduction, epoché, formal ontology, mereology, retention (and protention), and “Nachgewahren.” He served as a “Privatdozent” at ‘Halle’ and as a professor at the universities of ‘Göttingen’ and ‘Freiburg.’ He had a fruitful stint following his retirement. He was, however, expelled from the library of the ‘University of Freiburg’ for his Jewish background. He resigned from the cultural institute ‘Deutsche Akademie,’ founded under the Weimar Republic. Ludwig Wittgens...
8th April In History
DID WE MISS SOMEONE?
CLICK HERE AND TELL US
WE'LL MAKE SURE
THEY'RE HERE A.S.A.P
Quick Facts

Austrian Celebrities
German Celebrities
Mathematicians
Austrian Men
German Men
University Of Vienna
Childhood & Early Life
Edmund Gustav Albrecht Husserl was born on April 8, 1859, in Prostějov, Margraviate of Moravia, Austrian Empire (modern-day Prostějov, Czech Republic). He was the second child (and the second son) of a Jewish milliner named Adolf. He grew up with two brothers and a sister.
He was raised in Prostějov, where he studied at the secular elementary school. He then attended the ‘Realgymnasium’ in Vienna and the ‘Staatsgymnasium’ in Olomouc. He studied physics, mathematics, and astronomy at the ‘University of Leipzig’ from 1876 to 1878. The philosophy lectures of Wilhelm Wundt at ‘Leipzig’ inspired him. In 1878, he joined the ‘Frederick William University’ of Berlin. There, he studied mathematics under the tutelage of Karl Weierstrass and Leopold Kronecker. Former philosophy student Thomas Masaryk, who later became the first president of Czechoslovakia, was his mentor. He also attended the philosophy lectures of Friedrich Paulsen.
He joined the ‘University of Vienna’ in 1881. There, he studied mathematics under Leo Königsberger. He earned his PhD from the institute in 1883. His thesis was titled ‘Beiträge zur Variationsrechnung’ (‘Contributions to the Calculus of Variations’). He then began working as an assistant to Karl Weierstrass in Berlin. After the latter fell ill, Husserl returned to Vienna. After a short stint in the military, he started focusing on philosophy.
He attended lectures on philosophy and philosophical psychology by Franz Brentano at the ‘University of Vienna’ in 1884. He was exposed to the works of David Hume, Hermann Lotze, Bernard Bolzano, and J. Stuart Mill, through Brentano. The impact of Brentano led Husserl to resolve to devote his life to philosophy.
In 1886, he studied philosophy under Carl Stumpf, an ex-student of Brentano, and followed him to the ‘University of Halle.’ He wished to secure his “habilitation,” which would make him a qualified university-level teacher. In 1887, he wrote ‘Über den Begriff der Zahl’ (‘On the Concept of Number’) under the supervision of Stumpf. It later became the basis for his 1891 book on the philosophy of mathematics, titled ‘Philosophie der Arithmetik,’ which was also considered his first significant work. 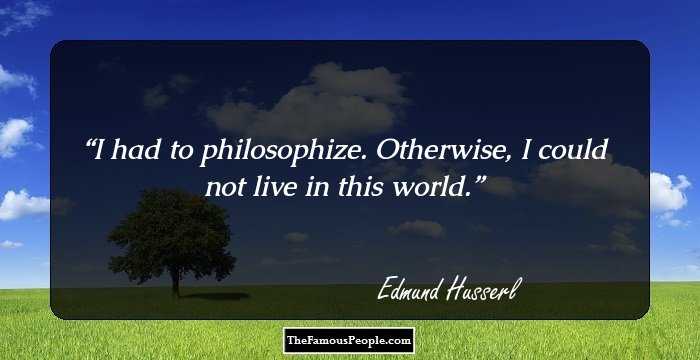 Quotes: I
Continue Reading Below
Career & Work in Philosophy
In 1887, he became a “Privatdozent” at the ‘University of Halle.’ In 1891, he published ‘Philosophy of Arithmetic,’ his first book. It was a product of his extensive study of mathematics (under Weierstrass and Königsberger) and his research on philosophy and psychology (under Brentano and Stumpf). Dedicated to Brentano, the book was based much on Husserl’s 1887 “habilitationsschrift” ‘Über den Begriff der Zahl’ (‘On the Concept of Number’). Gottlob Frege criticized the psychologism of the book. Such criticism adversely affected Husserl’s career as a professor.
After around a decade, in 1900–1901, he came up with a two-volume work titled ‘Logische Untersuchungen' (‘Logical Investigations’), in which he discussed the philosophy of logic and criticised psychologism. It secured his reputation, influenced philosophers such as Emil Lask and Martin Heidegger, and also contributed to the development of phenomenology, structuralism, and continental philosophy. However, he was never accepted as a practitioner of true logic by Frege and others. It is also believed that through this work, Husserl became the first to reason consciously (and at length) on parts and wholes (a study known as mereology in philosophy and mathematical logic).
He became an “extraordinarius professor” at the ‘University of Göttingen’ in 1901. He became a co-editor of the journal ‘Logos’ in 1910.
He founded the journal ‘Jahrbuch für Philosophie und Phänomenologische Forschung’ (‘Yearbook for Philosophy and Phenomenological Research’) at ‘Freiburg’ in 1912. From 1913 to 1930, it published articles of their phenomenological movement. Its first issue included ‘Ideen,’ a significant work by Husserl, in which he had precisely and clearly elaborated the eidetic and phenomenological reductions. Soon, he focussed on the ideal, vital structures of consciousness.
In 1916, he joined the ‘Albert Ludwigs University of Freiburg’ as a professor of philosophy. In 1923, he refused an offer to join the ‘University of Berlin.’ After serving for over a decade, Husserl requested retirement from ‘Freiburg.’ He took his last class at the institute on July 25, 1928. On April 8, 1929, on the occasion of his 70th birthday, a “Festschrift” was presented to him.
He delivered several lectures even after retirement. Husserl’s 1931 book ‘Méditations cartésiennes’ was based on the four lectures he had delivered on February 23 and 25, 1929, in the ‘Amphithéatre Descartes’ at the ‘Sorbonne.’ The book was divided into five "meditations" and introduced the principal features of the philosopher's mature transcendental phenomenology, which included, (not exhaustively) the epoché, static and genetic phenomenology, transcendental reduction, eidetic phenomenology, and eidetic reduction. Husserl asserted in the “fourth meditation” that transcendental phenomenology was transcendental idealism. 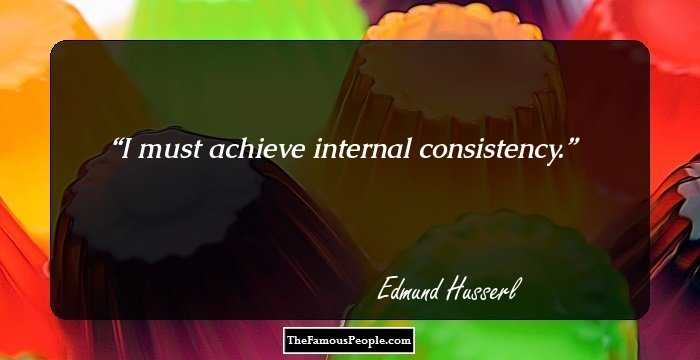 Quotes: I
The Effect of the Nazi Era
Following the Anti-Jewish legislation of April 1933 in pre-war ‘Nazi’ Germany, Husserl was banned from using the ‘University of Freiburg’ library or any other academic library. The ban was, however, lifted the following week, amidst massive public opposition. Martin Heidegger, one of Husserl’s best-known students, who also served as Husserl’s personal assistant at ‘Freiburg’ from 1920 to 1923, was elected the rector of the university on April 22, 1933. Heidegger joined the ‘Nazi Party.’
In July 1933, Husserl resigned from the ‘Deutsche Akademie.’ By then, Heidegger, whose work was championed by Husserl since 1917, had severed all ties with the latter and communicated only through intermediaries. According to Heidegger, his relationship with Husserl had strained when the latter had publicly "settled accounts" with him and Max Scheler during the early 1930s. Heidegger also remained absent at Husserl’s cremation in 1938. The original dedication to Husserl in his primary work ‘Being and Time’ (1926) was also removed from the book’s war-time 1941 edition.
German–American philosopher and political theorist Hannah Arendt, who had a long romantic association with Heidegger, once called Heidegger a "potential murderer" whose behavior toward Husserl had caused the latter’s death. She, however, took back the allegation later.
In his book ‘Die Krisis’ (Belgrade 1936), which was based on his lectures in Prague in 1935 and in Vienna in 1936, Husserl described the cultural crisis that was overpowering Europe. He also discussed Kant, Galileo, and Descartes in his approach to a philosophy of history.
In 1939, following Husserl's death, his manuscripts, consisting of around 40,000 odd pages of "Gabelsberger" stenography, along with his entire research library, were saved and smuggled to Belgium by the Franciscan priest Herman Van Breda. These were taken to Leuven and preserved by the ‘Husserl Archives’ of the ‘Higher Institute of Philosophy.’ Later, many of his research manuscripts were published in the ‘Husserliana.’
Family & Personal Life
Husserl married Malvine Steinschneider in 1887. Their three children, Elizabeth, Gerhart, and Wolfgang, were born in 1892, 1893, and 1894, respectively.
Both Gerhart and Wolfgang went to fight on the Western Front during World War I, in October 1914. Wolfgang died fighting on the battlefield of Verdun on March 8, 1916. Gerhart went on to become a legal scholar and philosopher and served as a professor of law at the ‘University of Kiel.’ He was later dismissed from the institute because of the ‘Law for the Restoration of the Professional Civil Service.’ He later immigrated to the U.S. and taught at the ‘University of Washington.’
In the autumn of 1937, Husserl had a severe fall. He then became ill with pleurisy and died on April 27, 1938, in Freiburg. His eulogy was delivered by his research assistant, Eugen Fink. 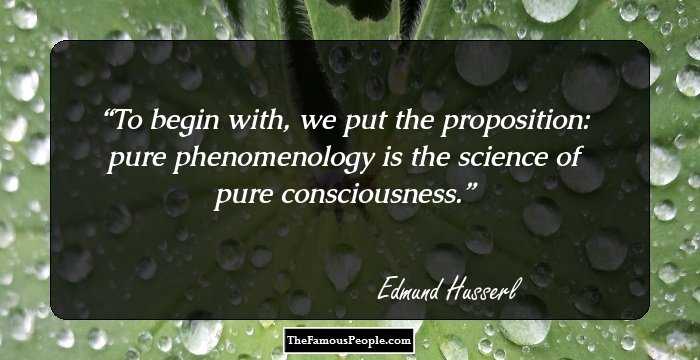 Quotes By Edmund Husserl | Quote Of The Day | Top 100 Quotes

See the events in life of Edmund Husserl in Chronological Order