(One of the Greatest Philosophers of the 20th Century)

Ludwig Wittgenstein was an Austrian philosopher who inspired two great philosophical movements of the 20th century — logical positivism and ordinary language philosophy. Though born in one of the richest families in Vienna, he was deeply influenced by philosophy and pursued a career in the same, going against his father’s wish, who wanted Wittgenstein to join family business. Greatly influenced by famous philosophers like Bertrand Russell and by Gottlob Frege, Wittgenstein applied modern logic to metaphysics, providing new definition to the relations between world, thought and language, thereby explaining the nature of philosophy. He was a highly sensitive and nervous person who often got annoyed and disturbed by things around him. Beyond doubt, he was a great philosopher of 20th century and continues to influence current philosophical thoughts in many areas like logic and language, perception and intention, ethics and religion, aesthetics and culture and such more. Read on to learn more about the life and career of this legend. Edmund Husserl
DID WE MISS SOMEONE?
CLICK HERE AND TELL US
WE'LL MAKE SURE
THEY'RE HERE A.S.A.P
Quick Facts

discoveries/inventions: The Gospel In Brief

Ludwig Wittgenstein was born on 26 April 1889 in Vienna, Austria. His father, Karl Otto Clemens Wittgenstein, was an industrial tycoon, holding monopoly over Austria’s steel cartel. Over the time, he became one of the wealthiest men in Europe. He was a perfectionist and lacked compassion.

Ludwig’s mother, Leopoldine Maria Josefa Kalmus, was weak in temperament, unable to stand up to her husband, who wanted his children to enter the industry. However, she was a great musician and played the piano very well.

In Ludwig’s childhood, their home was the center of Viennese cultural life. Intellectuals like Karl Kraus, Gustav Klimt, Oskar Kokoschka and Sigmund Freud were regular visitors there. The evening musical soirees were attended by great artists like Johannes Brahms, Gustav Mahler, and Bruno Walter.

Like his brothers, Ludwig Wittgenstein was never sent to school, but was educated at home by private tutors until he was fourteen years old. In 1903, after two of his brothers committed suicide, his father relented and enrolled him at the Realschule in Linz, where he studied for three years.

From his childhood, Ludwig showed interest in mechanics, making a working sewing machine at the age of ten. His love for technology was enhanced at the Realschule and he decided to study engineering at college level. Otherwise, he had a very unhappy time at school.

Raised in a wealthy and intellectual surrounding, he could not adjust to the new environs. He was shy and spoke with a stammer. His school mates, who came from less affluent families, did not understand him either, mocking him for his elegant dresses and unsocial behavior.

After passing out from Realschule in 1906, he moved to Berlin, where on 23 October enrolled at the Technische Hochschule in Charlottenburg to study mechanical engineering. He studied there for three semesters. It was here that he developed an interest in aeronautics.

On May 5, 1908, Ludwig Wittgenstein received his diploma (Abgangzeugnis) from Technische Hochschule. Thereafter, he moved to England and got enrolled at Victoria University of Manchester for his doctoral work.

At Manchester, his first project involved the behavior of kites in the upper atmospheric level. For his second project, he began working on a propeller that had a small jet engine on the end of each blade. Although he made one and tested it he soon realized that he needed better knowledge in mathematics 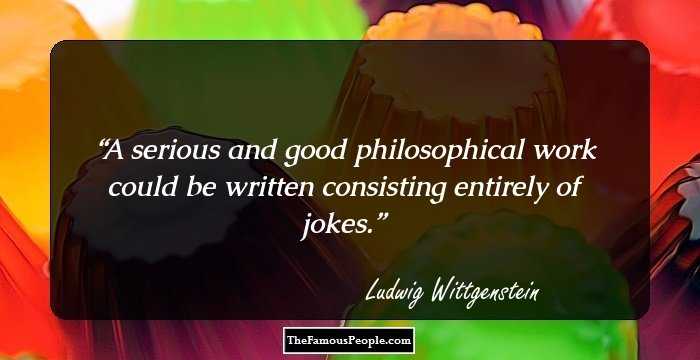 In October 1911, Ludwig Wittgenstein left the University of Manchester to study mathematics with Bertrand Russell at the Trinity College, Cambridge. There, he not only attended Russell’s lectures, which very few students did, but also followed him to his room, discussing mathematical philosophy until it was dinner time.

Although initially Russell was little exasperated by such intrusion, he was soon impressed by Wittgenstein. By November 1911, he realized that he had a genius, possessing “fire and penetration and intellectual purity to a quite extraordinary degree” at his hand.

By 1912, Russell persuaded Ludwig Wittgenstein to give up applied mathematics, instead concentrate on mathematical philosophy. In the same year, Wittgenstein submitted his first paper, ‘What is Philosophy’ to Cambridge Philosophical Society.

During this period, he often suffered from depression. Driven both by his work and his personal life, he contemplated suicide more than once. He also found the atmosphere in Cambridge rather superfluous. Each time, Russell played his savior.

By 1913, Russell declared that Wittgenstein had learned whatever he had to offer. In the same year, against Russell’s advice, he moved to Norway and settled down in the village of Skjolden. By then, his father had died, leaving him a huge inheritance and therefore, he concentrated on his work.

The period at Skjolden was highly productive. Working in isolation, he wrote Logik (Notes on Logic), which would form the basis of his later work, Tractatus. He also took the opportunity to learn Norwegian and Danish. 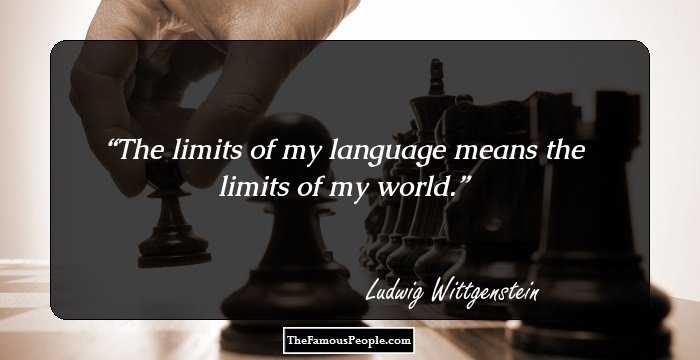 In 1914, when the First World War broke out, Ludwig Wittgenstein was in Vienna. He immediately joined the Austro-Hungarian Army, first working on a ship and then in an artillery shop, before being posted in the Russian front. All the while, he continued to work on Tractatus.

In 1918, he went home on military leave, where in August he completed his great work on, Tractatus and sent it to the publishers Thereafter, he rejoined his duty and was sent to the Italian front.

When the war ended, he was taken a prisoner of war by Italians, having to spend nine months in Italian POW camps. On 25 August, 1919 he returned home to Vienna and decided to abandon philosophy because he felt that he had written all he had to offer.

Ludwig Wittgenstein divided his inheritance among his siblings and enrolled at a teacher training college to be trained as primary school teacher, earning his living as a gardener in a monastery. Finally in 1920, he was appointed as a primary school teacher in a remote village called Trattenbach.

Life as a primary teacher was not at all easy for him because most people found him rather eccentric. He also found it hard to maintain cordial relationship with his fellow teachers. He often contemplated suicide; but the thought of the children, who genuinely adored him, stopped him.

In 1921, Tractatus was first published in German as Logisch-Philosophische Abhandlung. It attracted the attention of two groups of philosophers; one based in Cambridge and the other based in Vienna. Both the groups tried to make contact with him.

Frank Ramsey of the Cambridge group traveled to Puchberg, where Ludwig Wittgenstein was then teaching, to talk to him. Subsequently, he, along with R.B. Braithwaite, translated the book into English and published it in 1922 as Tractatus Theologico-Politicus. Moritz Schlick of the Vienna Circle also invited him to join their discussions.

Stimulated by such contacts, Wittgenstein once again decided to resume his work in philosophy.  Concurrently, he continued to serve as a primary teacher, writing a pronunciation and spelling dictionary for the children. Entitled ‘Wörterbuch für Volksschulen’ it was the only other book that was published in his lifetime.

On 28 April 1926, he resigned from his teaching position due to a controversy involving a slow learner. He spent the next two years, working first as a gardener and then as an architect, building his sister’s house. By then, Tractatus had created a stir, making him internationally famous.

In 1929, Ludwig Wittgenstein returned to the Cambridge University, where he applied as an advanced undergraduate because he did not hold any degree. When Russell found that Ludwig earlier residency made him eligible for PhD, Ludwig submitted Tractatus as his doctoral thesis and received his doctoral degree in the same year.

In 1930, he was elected to a senior research fellowship at Trinity College, which he held for six years. Concurrently, he began to serve as a lecturer in the Moral Sciences faculty.

In 1936-1937, he took leave of absence and traveled to Norway, writing his third and last work, Philosophical Investigations. However, he continued to revise the work throughout his life, as a result of which, the book could not be published in his lifetime.

In 1938, Hitler forcibly annexed Austria and with that Ludwig Wittgenstein became a citizen of greater Germany. As three of his grandparents were Jews, he also began to be considered as a Jew under the 1935 Nuremberg racial laws. Therefore, he now began to think of taking up British citizenship.

In 1939, he succeeded G. E. Moor as Knightbridge Professor of Philosophy and was granted British citizenship shortly after that.  In the same year, he traveled to Austria and Germany in order to negotiate with the Nazi regime, signing an unknown amount to them in order to save his siblings.

As the Second World War started, he found it intolerable that he should teach philosophy while a war was going on. Therefore, he volunteered to serve a dispensary porter in London’s Guy’s Hospital, making sure his identity was not revealed. Later, he became an assistant in a medical research team.

In October 1944, Ludwig Wittgenstein returned to Cambridge. By 1946, the first part of Philosophical Investigations was ready for printing; but for some reason, he withdrew the work from the publisher and continued working on it.

In 1947, Ludwig Wittgenstein resigned from his post at the Cambridge University in order to concentrate on writing. He also traveled a lot, visiting Ireland in 1948 and USA in 1949. All the while, he continued to write, leaving many unfinished manuscripts at his death two years later. 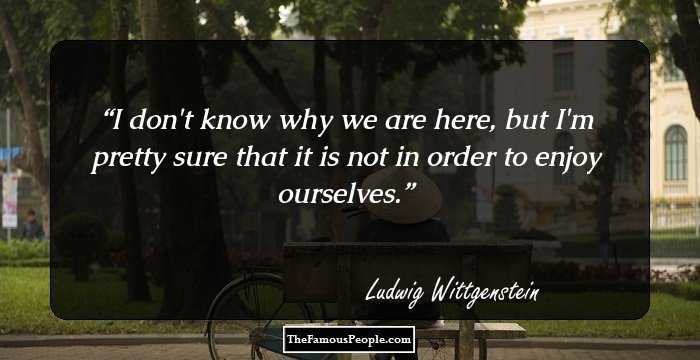 Ludwig Wittgenstein’s first major work was Tractatus Theologico-Politicus.  The title was suggested by G.E. Moore and translated into English it means Logico-Philosophical Treatise. It does not contain any argument, but consists mainly of some declarative statements, which are intended to be self-evident.

Blue and Brown Books, published posthumously by Rush Rhees as Preliminary Studies for the Philosophical Investigations' is another of his important works. It contains lectures and notes he had prepared between 1933 and 1935.

Ludwig Wittgenstein did not marry. But according his biographer Ray Monk, also a renowned British philosopher, he fell in love at least four times. Among them, three were male and one was a female.

From 1926 to 1931 he had a relationship with one Marguerite Respinger. It is possible that he even wanted to marry her; but she withdrew from the relationship when it became clear he had a platonic union in mind.

Among his male lovers, first was David Pinset, whom he met in 1912 at the Trinity College. They developed a close platonic relationship. Pinset died in a flying accident in 1918. Wittgenstein later dedicated Tractatus to his memory.

Next was Francis Skinner, who enrolled as a student at the Cambridge University in 1930. They had an all-absorbing relationship during 1930s and Skinner collaborated with him on many occasions. In 1946, he once more fell in love, this time with Ben Richard, a medical student, 40 years his junior.

In 1949, on his return from the USA, Ludwig Wittgenstein was diagnosed with cancer. He died of it on April 29, 1951 in Cambridge and was given a Catholic burial at Parish of the Ascension Burial Ground.

To ensure that Wittgenstein’s philosophy continues to play a creative role in the twenty-first century, British Wittgenstein Society was established in 2007.

Quotes By Ludwig Wittgenstein | Quote Of The Day | Top 100 Quotes

See the events in life of Ludwig Wittgenstein in Chronological Order