(Popper is known for his rejection of the classical inductivist views on the scientific method in favour of empirical falsification.)

Karl Popper was an Austrian-British philosopher and social commentator who is considered as one of the most significant philosophers of science of the 20th century. A self-professed critical-rationalist, he adopted a falsificationist methodology in his works and rejected the classical inductivist views on the scientific method. Also a political philosopher, he supported liberal democracy and the principles of social criticism which he believed were essential for an open society to thrive. Born into an educated upper-middle-class family, he had a “decidedly bookish” upbringing. He was academically inclined and proceeded to earn a doctorate in psychology. Interested in a teaching career from a young age, he began teaching in a secondary school. Eventually, he was able to procure the post of lecturer in philosophy at Canterbury University College in New Zealand. He later moved to London and remained intellectually active for the rest of his life even after his retirement. He is credited with coining the term "critical rationalism" to describe his philosophy. He claimed to have solved the philosophical problem of induction. He considered knowledge to be objective and proposed what is today known as Popper’s Three Worlds, a way of looking at reality. He was conferred with numerous awards and honors for his contribution to philosophy. Cometan
28th July In History
DID WE MISS SOMEONE?
CLICK HERE AND TELL US
WE'LL MAKE SURE
THEY'RE HERE A.S.A.P
Quick Facts

1981 - Dr. Leopold Lucas Prize
1983 - Ring of Honour of the City of Vienna
1988 - the Premio Internazionale of the Italian Federico Nietzsche Society

Karl Raimund Popper was born on 28 July 1902, in Vienna, Austria-Hungary into a well-to-do family. While all of his grandparents were Jewish, they converted to Lutheranism before he was born.

His father, Simon Siegmund Carl Popper, was a lawyer by profession. He was a partner in the law firm of Raimund Grübl and later took over the business. Karl received his middle name after his father’s business partner, Raimund Grübl. His mother, Jenny Schiff, was an ardent music lover. The Austrian philosopher Josef Popper-Lynkeus was one of Karl’s uncles.

He stopped attending school when he was 16 and instead began attending lectures in physics, mathematics, philosophy, and psychology as a guest student at the University of Vienna.

As a young man, he was profoundly influenced by Marxist ideas and joined the Association of Socialist School Students in 1919. He was also a member of the Social Democratic Workers' Party of Austria, which adopted Marxist policies. However, following a few incidents, he lost faith in Marxism but continued his support for social liberalism. 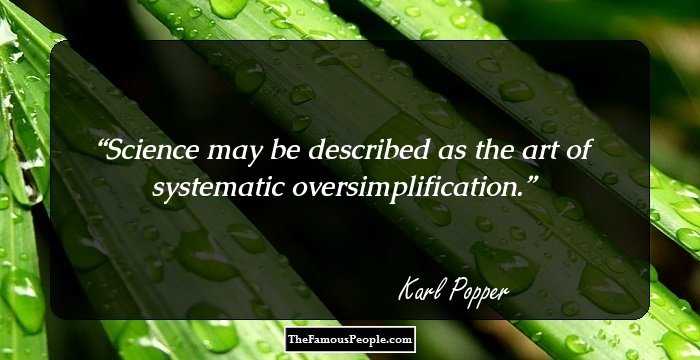 Karl Popper worked in street construction for a while and quit when he could no longer cope with the heavy labor. He began apprenticing as a cabinetmaker while continuing to attend university as a guest student.

At that time, he aspired to start a daycare facility for children. He even volunteered in one of psychoanalyst Alfred Adler's clinics for children to learn more about children.

He joined the University of Vienna as a regular student after attending lectures as a guest student for years. He completed his training as an elementary teacher in 1924 and took up a job in an after-school care club for socially endangered children.

He joined the newly founded Pädagogisches Institut in 1925 and furthered his studies in philosophy and psychology.

Karl Popper earned a doctorate in psychology, under the supervision of Karl Bühler, one of the founding members of the Würzburg school of experimental psychology, in 1928.

He earned authorization to teach mathematics and physics in secondary school in 1929. In the 1930s, Nazism was beginning to rise in Europe. Owing to his background, he wanted to immigrate to a country that was safe for people of Jewish descent.

He went to the United Kingdom for a study visit on unpaid leave in 1935 and 1936. The following year, he finally managed to secure an academic position in New Zealand, as a lecturer in philosophy at Canterbury University College of the University of New Zealand in Christchurch.

In New Zealand during World War II, he wrote the book The Open Society and Its Enemies, a treatise on political philosophy. It was published in 1945.

In the ensuing years, his reputation as a philosopher of science and social thinker grew steadily. He also wrote numerous books and scientific papers. He served as the president of the Aristotelian Society from 1958 to 1959.

In 1969, he retired from academic life, though he remained intellectually active as an author, teacher, and broadcaster until his last years. He returned to Austria with his ailing wife in 1985; she died a few months later. He moved back to the United Kingdom in 1986. 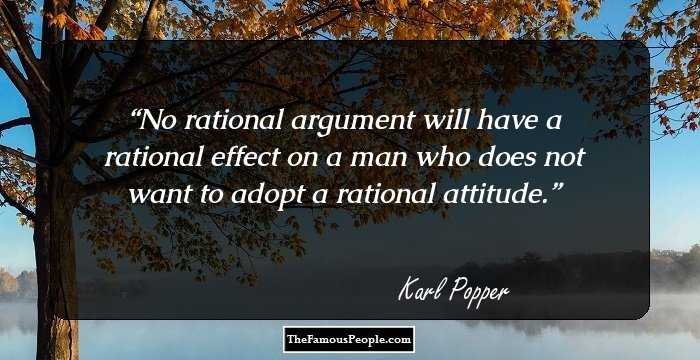 Karl Popper’s 1957 book, The Poverty of Historicism, is considered one of his major works. First written as a paper in 1936, it was later updated and published in book form. It was a commentary on the scientific method in the social sciences.

His work on political philosophy, The Open Society and Its Enemies, was written during World War II. In this book, he presents a critique of theories of teleological historicism and defends the open society and liberal democracy.

In the mid-1920s, Karl Popper fell in love with his colleague Josefine Anna Henninger and began courting her. The couple got married in 1930. Due to the war situation and political instability during the early years of their marriage, they decided not to have children.

They had a long and happy marriage that lasted several decades. His wife died in 1985.

Karl Popper suffered from cancer, pneumonia, and kidney failure during his last days and breathed his last on 17 September 1994. He was 92. 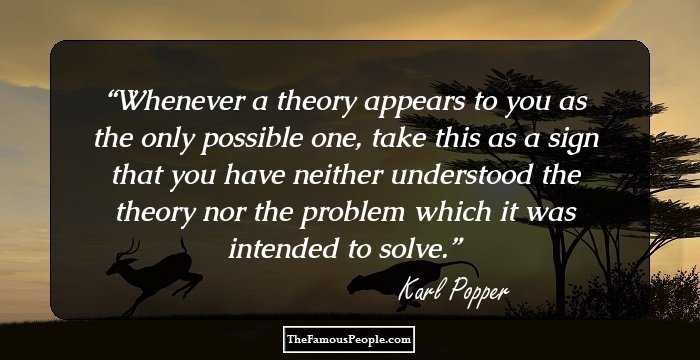 Quotes By Karl Popper | Quote Of The Day | Top 100 Quotes

See the events in life of Karl Popper in Chronological Order