Advanced Search
Theodor W. Adorno was a German sociologist, philosopher, psychologist, composer, and music critic. He was a notable member of the 'Frankfurt School' of critical theory. Adorno is widely regarded as one of the 20th century's most distinguished aesthetic thinkers and philosophers. He was also one of the century’s finest essayists. In his publications, such as 'Dialectic of Enlightenment' (1947), 'Minima Moralia' (1951), and 'Negative Dialectics' (1966), Adorno had criticized fascism and the culture industry, which heavily influenced the European New Left. He had challenged both Sir Karl Popper's philosophy of science and Martin Heidegger's philosophy of existence. A trained pianist, Adorno was a great advocate of Arnold Schoenberg's "twelve-tone technique." His commitment to avant-garde music served as the backdrop for many of his writings. His publications were initially rejected in English-speaking countries due to their inaccurate translations. However, better translations were released later, and a few of them were published posthumously. Adorno's writings facilitate the assessment of his work in epistemology and ethics and provide scope to his work in aesthetics and cultural theory. Martin Buber
DID WE MISS SOMEONE?
CLICK HERE AND TELL US
WE'LL MAKE SURE
THEY'RE HERE A.S.A.P
Quick Facts

awards: Goethe Plaque of the City of Frankfurt

German Celebrities
Music Critics
German Men
Male Philosophers
German Philosophers
Childhood & Early Life
Adorno was born Theodor Ludwig Wiesengrund, on September 11, 1903, in Frankfurt, Germany, to Oscar Alexander Wiesengrund (1870–1946) and Maria Calvelli-Adorno della Piana (1865–1952). He had no siblings.
Adorno grew up with an interest in music, due to his mother and aunts, and could play Beethoven's pieces on the piano at the age of 12 years.
From ‘Deutschherren Middle School,’ Adorno was transferred to the 'Kaiser-Wilhelm Gymnasium' (1913–1921). Before he had graduated, Adorno was already under the influence of Georg Lukács's 'The Theory of the Novel' and Ernst Bloch's 'The Spirit of Utopia.' However, he was also disgusted with the idea of nationalism prevalent during World War I.
Adorno studied music composition at the 'Hoch Conservatory' and simultaneously took private lessons with composers Bernhard Sekles and Eduard Jung. He left the gymnasium to study philosophy, sociology, and psychology at the 'Johann Wolfgang Goethe University' in Frankfurt, where he continued his readings with his friend Siegfried Kracauer, a literary editor at 'Frankfurter Zeitung.'
Along with Kracauer, Adorno began writing concert reviews and composed music pieces for notable journals such as the 'Zeitschrift für Musik,' the 'Neue Blätter für Kunst und Literatur', and the 'Musikblätter des Anbruch.' It marked the beginning of Adorno's rise as a prominent music critic. 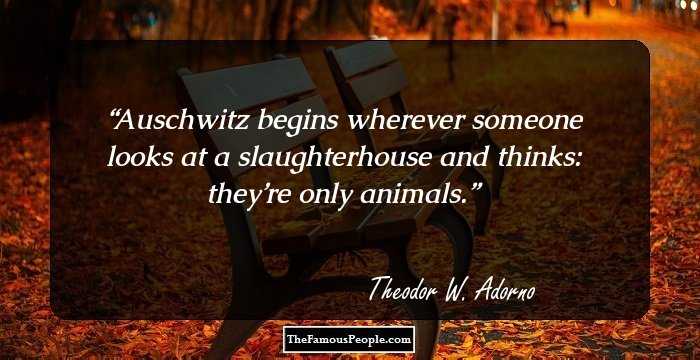 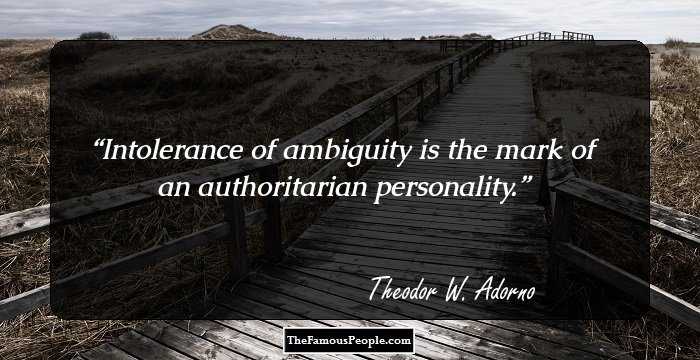 Quotes: Personality
Family, Personal Life & Death
Adorno's Catholic mother was a professional singer from Corsica, while his Jew-turned-Protestant father had a wine-export business.
Adorno's father had close ties with 'Karplus & Herzberger' in Berlin. He was married to Margarete (or Gretel), the oldest daughter of the Karplus family, on September 8, 1937.
Adorno died of a heart attack on August 6, 1969, in Visp, Switzerland.
Recommended Lists:
Critics & Connoisseurs #21

See the events in life of Theodor W. Adorno in Chronological Order