Advanced Search
Martin Heidegger was a German philosopher, who is famous for his theories on existentialism and phenomenology. He was associated with existentialism, despite his efforts to stay away from it. His work had a crucial influence on the French existentialist Jean Paul Sartre. He gave the world a phenomenological critique of Kant and wrote widely on Nietzsche and Holderlin. His work did not just influence the literary world but made a substantial impact on fields such as philosophy, theology, art, architecture, artificial intelligence, cultural anthropology, design, literary theory, social theory, political theory, psychiatry, and psychotherapy. He wrote one of the most important works on philosophy of the 20th century, ‘Sein und Zeit (Being and Time)’. He published the book under pressure to meet the criteria for Husserl's chair at the University of Freiburg and the accomplishment of this work made his appointment to the post certain. He led a highly controversial life because of his association with the Nazi Party during World War II, an action he neither ever regretted nor apologized for in the public. Edith Stein
DID WE MISS SOMEONE?
CLICK HERE AND TELL US
WE'LL MAKE SURE
THEY'RE HERE A.S.A.P
Quick Facts

German Celebrities
German Men
Male Philosophers
German Philosophers
German Intellectuals & Academics
Childhood & Early Life
Martin Heidegger was born in Messkirch, Germany, to Friedrich Heidegger and Johanna Kempf. His father was the sexton of the village church, which is why Heidegger was brought up in a household of stringent religious beliefs.
Initially, his parents could not afford university education so he was enrolled at a Jesuit seminary but because of his psychosomatic heart condition, Heidegger was asked to leave the program.
From 1909 to 1911, Heidegger studied theology at the University of Freiburg and later changed his subjects to philosophy. By now he had left Catholicism because with his newly attained philosophical views, Catholicism did not make much sense.
He attained his doctoral degree after finishing his thesis on psychologism, inspired by Neo-Thomism and Neo-Kantianism and completed his venia legendi in 1916. He started working as Privatdozent and then as a German soldier during World War I. 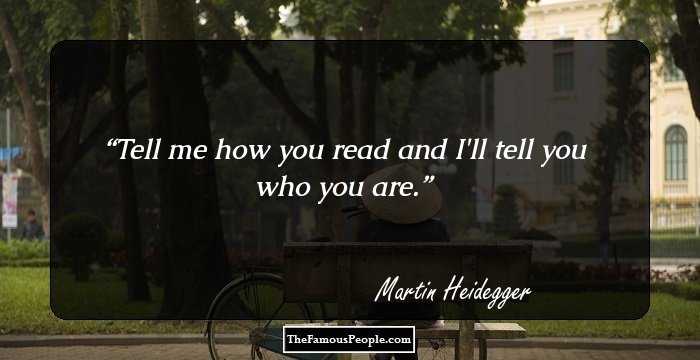 Quotes: You, Me
Continue Reading Below
Career
After working as a salaried assistant to Edmund Husserl at the University of Freiburg, Heidegger was honored with an extraordinary Professorship in Philosophy at the University of Marburg in 1923.
In 1927, Heidegger published his foremost work ‘Sein und Zeit (Being and Time)’ and became the Professor of Philosophy at the University of Freiburg in the following year, after Husserl retired.
In spite of its virtually tightly packed obscurity, the work earned Heidegger acknowledgment as one the world’s chief philosophers.
Heidegger's later works include: ‘Vom Wesen der Wahrheit (‘On the Essence of Truth’) 1930’, ‘Der Ursprung des Kunstwerkes (The Origin of the Work of Art) 1935’, ‘Einfuhrung in die Metaphysik (Introduction to Metaphysics (1935)’, Bauen Wohnen Denken (Building Dwelling Thinking) 1951’, etc.
He was made the rector of the University of Freiburg in 1933 and later joined the National Socialist German Workers’ (Nazi) Party. In his speeches and addresses, he started to openly support the German revolution and appreciate Adolf Hitler.
After the World War II ended, French authorities made sure that Heidegger is not allowed to teach because of his association with the Nazi Party in 1946. But he was later pronounced as a Mitlaufer and was not prosecuted.
This pronouncement allowed the University of Freiburg to hire him back and he was granted emeritus status in 1951 and continued to teach there for more than a decade, until 1967. 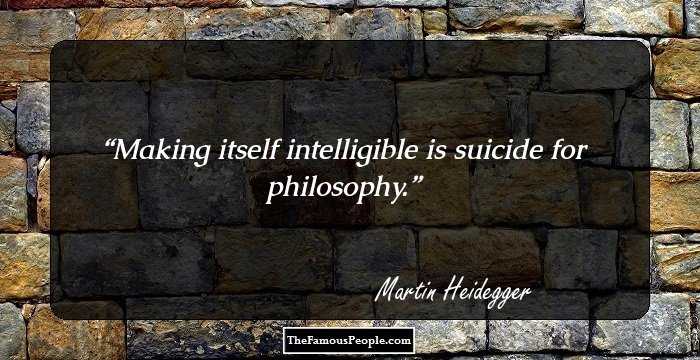 Major Works
‘Sein und Zeit (Being and Time)’, published in 1927, is Heidegger’s first academic book and is considered to be his most important work. The book investigates the question of ‘being’ through themes such as mortality, care, anxiety, temporality, and historicity.
Personal Life & Legacy
Heidegger got married to Elfride Petri in a Catholic ceremony and a week later in a Protestant ceremony in 1917. They had a son named Jorg together. He used to spend much of his time at his vacation home at Todtnauberg.
He died in 1976 and was buried in the Messkirch cemetery beside his parents and brother. 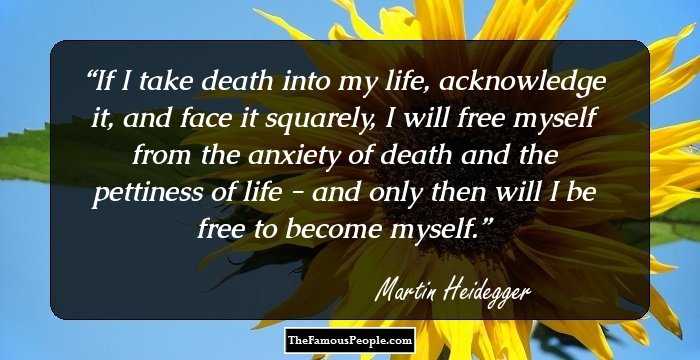 Quotes: Life, Death, Will, I
Trivia
He had extramarital affairs with Hannah Arendt and Elisabeth Blochmann, both were his students. Both the girls were Jewish and he helped Blochmann to flee from Germany prior to World War II, and restarted the association with both of them after the war.
In 1966, Heidegger was interviewed by Rudolf Augstein and Georg Wolff for ‘Der Spiegel magazine’, in which he agreed to talk about his political past provided that the interview is published posthumously.
In the interview, he defended his association with National Socialism in two ways - first, he said there was no option and it was eminent to save the university from being politicized. Secondly, he confessed that he saw an ‘awakening’ which he thought may help to find a ‘new national and social approach,’ but said that he changed his mind about this in 1934, mainly after being provoked by the brutality of the Night of the Long Knives.
Heidegger wanted to meet French writer Derrida in person after the latter sent him some of his work. There was discussion of a meeting in 1972, but it did not take place.
Lucien Braun introduced to Heidegger the work of Michel Foucault. Foucault’s association to Heidegger is a subject of substantial complexity - Foucault recognized Heidegger as a philosopher whom he read but never wrote about.

Quotes By Martin Heidegger | Quote Of The Day | Top 100 Quotes

See the events in life of Martin Heidegger in Chronological Order