(Philosopher, Christian Nun and One of the Six 'Patron Saints of Europe')

Advanced Search
It is often stated that there are certain people who shape the consciousness of a nation through the toughest of times and in case of Germany one of those unsung heroes has to be the philosopher Edith Stein. She was born in a Jewish family but went on to embrace Catholicism and became one of the greatest philosophers who ever lived. It is in fact necessary to point out that her contributions as a philosopher and theological authority resonates to this day in her native Germany. Her work however fell afoul of the presiding Nazi regime who thought she was an enemy of the state and that is what led to her untimely demise after being subjected to intense torture at one of the many infamous concentration camps meant for Jewish prisoners. However, it is also extremely important to point out that she was not someone who became a philosopher one fine day and became a popular voice. Edith Stein studied at the University of Cologne and received the equivalent of a Ph.D. degree as well before she moved on to the University of Freiberg in an assistants’ role. Her accomplishments are still studied by historians everywhere. Hannah Arendt
DID WE MISS SOMEONE?
CLICK HERE AND TELL US
WE'LL MAKE SURE
THEY'RE HERE A.S.A.P
Quick Facts

Cause of Death: Auschwitz Concentration Camp

German Celebrities
Philosophers
German Women
University Of Göttingen
Female Saints
Childhood & Early Life
Edith Stein was born to Siegfried Stein and Auguste Stein in a Jewish family on October 12, 1891, which also happened to be the day of Yom Kippur. She was born in the town of Breslau that was then located in the province of Silesia in Prussia.
Edith Stein was known to be a very gifted student and excelled in all subjects. Stein’s mother Auguste was a progressive individual who encouraged all her 11 children to do well at school and become rational thinkers.
Stein’s father did not live long and her mother was responsible for bringing her up. She took care of her education costs and after she finished high school, she was sent to study at the University of Breslau.
In 1915, Edith Stein’s academic career was interrupted since she had to work as a volunteer for the International Red Cross. She worked as a nurse at a hospital located in Moravia and that experience would go on to have a profound influence on her life.
In 1916, Edith Stein completed her education when he was awarded a doctorate degree in philosophy by University of Freiburg. She was guided by noted philosopher Edmund Husserl through the process and her thesis was titled ‘On the Problem of Empathy’. 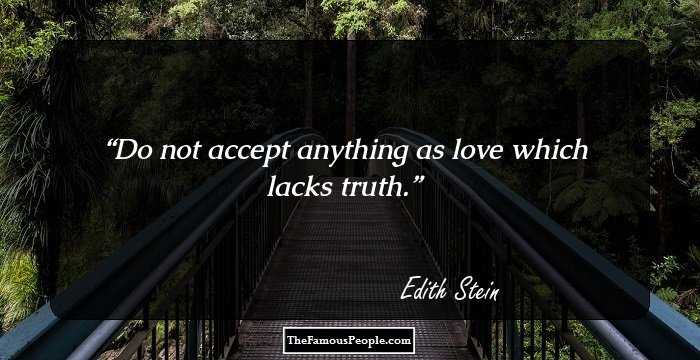 Quotes: Love
Continue Reading Below
Later Life
After receiving her doctoral degree from the University of Freiberg, Stein was employed in the role of a teaching assistant at the same university and was engaged in editing research based papers written by other philosophers.
In 1921, during a holiday to her native Breslau, Edith Stein, who had by then become an atheist, took a liking to Catholicism after reading the autobiography of St. Teresa of Avila. The following year she was baptised.
In 1923, Edith Stein was appointed as a teacher at the Dominican nuns’ school that was located in Speyer. During her eight year stint at the school she translated the works of St. Teresa and also learnt a lot about Catholic philosophy.
After leaving the nuns’ school, Edith Stein joined the Institute of Pedagogy located in Munster as a lecturer in the year 1932. However, her stint at the institute did not last beyond a year due to the anti-Semitic laws passed by the Nazi regime.
In 1934, she joined the Carmelite convent located in Cologne and assumed the name of Teresa Benedicta of the Cross in honour of St. Teresa. There she completed her first famous philosophical treatise named ‘Finite and Eternal Being.’ After four years, she was transferred to a branch of the Carmelite convent in the Netherlands following growing Nazi intolerance.
She worked on many more philosophical works during her time in Netherland but in 1942 she was taken to Auschwitz by the Gestapo and that is how her career finally came to an unfortunate end. 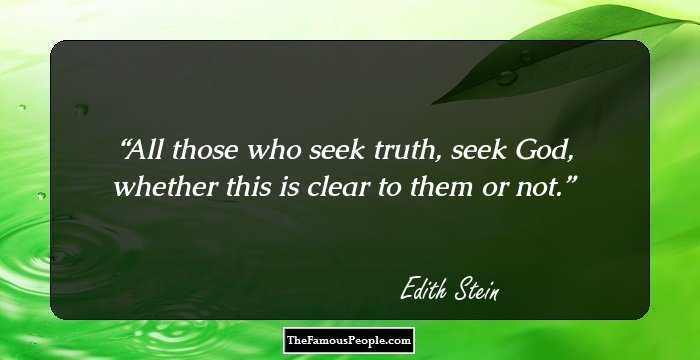 Quotes: God
Major Works
During her time in Echt in Netherlands; Edith Stein wrote her most celebrated philosophical work titled ‘The Science of the Cross’.
Personal Life & Legacy
There is no record of romantic liaison in the life of Edith Stein and she did not have any children. She had immersed herself in philosophical studies and continued to do so for a long as she lived.
While she was working in the Netherlands; the attitude Dutch bishops towards Nazi regime resulted in a backlash that led to the arrest of Edith Stein and her sister Rosa by the German Gestapo. She was taken to Auschwitz and on 9 August, 1942 she was killed in one of the infamous gas chambers.
Edith Stein was beatified as a martyr on May 1, 1987 by Pope John Paul II, and was canonized by him on October 11, 1998 in Vatican City. She is also known as St. Teresa Benedicta of the Cross.
On June 6, 2014, the 70th anniversary of D-Day, Prince Charles dedicated a bell to her at Bayeux Cathedral. 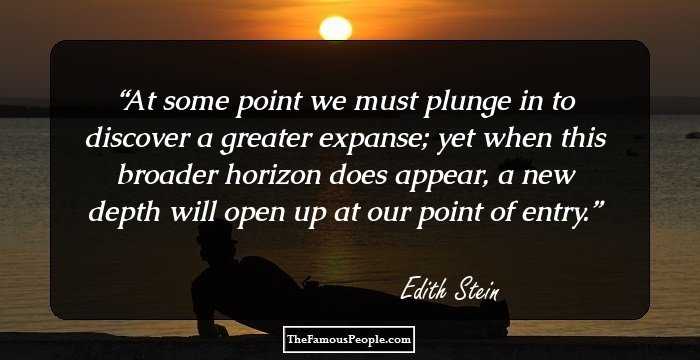 See the events in life of Edith Stein in Chronological Order