(German Philosopher Who Developed 'Marxism' Together With Karl Max)

Friedrich Engels was a German philosopher, journalist, businessman and close aid of Karl Marx. He, along with Karl Marx, founded the socialist theory and co-authored ‘The Communist Manifesto’. Engels was considered to be a brilliant mind and was quick and sharp in his judgement. Despite being a businessman, he also had knowledge about branch of natural sciences, physics, botany, chemistry and biology. Engels published countless articles and more than dozen books in his lifetime. But, his most notable work till now has been ‘The Condition of the Working Class in England’ which he wrote in 1844. It was published in German in 1845 and in English in 1892. Along with this, he published ‘Manifesto of the Communist Party’ with Karl Marx in 1848. Engels’ interests were poetry, fox-hunting and Sunday parties. His personal motto was ‘take it easy’, and ‘jollity’ was considered to be his most favourite virtue. Engels was a polyglot and was able to speak many languages, such as English, Russian, French, Italian, Portuguese, Irish Gaelic, Spanish, Polish and Milanese dialect. Vladimir Lenin had praised Engels in his speech where he appreciated the efforts put forward by him and Karl Marx in explaining socialism to the world. Martin Buber
DID WE MISS SOMEONE?
CLICK HERE AND TELL US
WE'LL MAKE SURE
THEY'RE HERE A.S.A.P
Quick Facts

German People
Revolutionaries
Non-Fiction Writers
German Women
Women Leaders
Childhood & Early Life
Friedrich Engels was born in Barmen, Prussia, which is now a part of Germany, on 28 November 1820. He was the eldest son of Friedrich Sr. and Elisabeth Franziska Mauritia von Haar, and had by seven siblings. Barmen was an industrial hub and Friedrich Sr. was a wealthy textile manufacturer.
Though Engels’ parents were Pietistic Protestant and he too was raised as per their principles, eventually Engels grew up to be an atheist. His mother was highly disappointed with his way of life and feared for him.
At the age of 17, Engels dropped out of high school because of family problems. His parents expected him to join their family business which he did few years later. He had begun reading many philosophical books and also started writing newspaper articles. 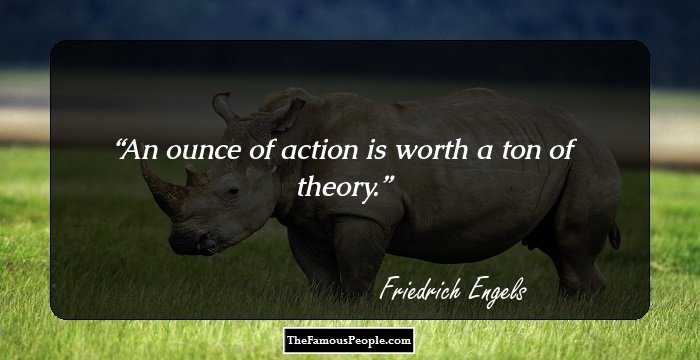 Continue Reading Below
Career
In 1838, he was sent by his father to work as a nonsalaried office clerk at a commercial house in Bremen. While in Bremen, Engels began reading more of banned work of many authors like Ludwig Borne, Karl Gutzkow, Heinrich Heine and Georg Wilhelm Friedrich Hegel. Of all the authors, Hegel inspired Engels the most.
After embracing Hegelian society, Engels joined the ‘Young Hegelians’ society along with Bruno Bauer and Max Stiner. This society converted Engels into an atheist which wasn’t difficult since Engels was against his own religion.
Engels started reading philosophy of Hegel and was heavily inspired by the German philosophy. In September 1838, he wrote a poem ‘The Bedouin’ which was his first published work in Bremisches Conversationsblatt No. 40.
When in Bremen, Engels started writing newspaper articles where he spoke about the societal harms of industrialisation. He also adopted a pseudonym, Friedrich Oswald, due to his confrontational writings which might have caused problems for his Pietistic family.
In 1841, while serving in the Prussian Army, Engels attended university lectures at University of Berlin and met group of Young Hegelians.
In 1842 Engels’ parents sent him to England to work in a mill which made sewing threads. His parents believed that this trip would change their son’s liberal thinking. But on his way to England, Engels met Karl Marx for the first time in the office of Rheinische Zeitung, a German newspaper.
He published his articles in Rheinische Zeitung whose editor was Karl Marx. His articles mainly spoke about the problems relating to unemployment and bad living conditions of factory workers.
Engels met Moses Hess, the Jewish French Philosopher and socialist in 1843, who convinced him to believe in the ideology of communism. Hess convinced Engels that communism was the only way to progress and develop the society.
He took Hess’ advice and moved to Manchester where there was a visible class difference. In Manchester, Engels worked in his father’s factory and made progress in his work, while taking time out to write articles.
Continue Reading Below
In 1843, Engels wrote ‘Outline of a Critique of Political Economy’ which was his first economic article. This article was published in 1844 by Karl Marx in his journal ‘Deutsch–Französische Jahrbücher’, which he used to run from Paris.
On 28th August 1844, Engels met Karl Marx and they instantly bonded with each other. While living in Paris, Engels helped Marx to write ‘The Holy Family’ which criticised the Young Hegelians and Bauer brothers. The book was published in February 1845.
During their stay in Paris, Engels and Marx also joined a secret revolutionary society called the ‘League of the Just’. This secret society was formed in France in 1837 to support the egalitarian society. In 1839, a rebellion was instigated by the French utopian revolutionary, Louis Auguste Blanqui, in which the ‘League of the Just’ participated.
Engels was in Brussels from 1845 to 1848 along with Karl Marx where he joined the underground ‘German Communist League’. This Communist League which consisted of many friends of Engels and Marx insisted them to write a pamphlet to elaborate the principles of communism.
Later on, this pamphlet became ‘The Manifesto of the Communist Party’ which is now known as ‘Communist Manifesto’. This was first published on 21st February 1848 and is still widely read all over the world.
Due to a revolution in France in 1848, both Engels and Marx had to return back to their homelands. In 1849, Friedrich Engels wrote an article called ‘The Magyar Struggle’ which was a report on the Revolution and War for Independence of Hungarian Republic.
When Engels and Marx lived in Cologne, they started editing a paper, Neue Rheinische Zeitung, which spread revolutionary ideas and believed that democracy was the first step towards communism. But after the coup in June 1849, the Prussian newspaper was suppressed. While Marx had lost his Prussian citizenship, he was deported to London. In November 1850, Engels joined Marx in London and started working in his father’s factory in Manchester.
Engels worked in the factory only to support Marx financially. At that time, Marx was writing his masterpiece ‘Das Kapital’. Along with working in the mill, Engels also wrote his notable work, ‘The Peasant War in Germany’ which was based on Protestant Reformation, 1525 revolutionary war of peasants and Martin Luther.
Karl Marx died in 1883 and Engels found it difficult to hold the spirit of communism alive. Since then he has been known as the first Marxist. Engels made sure that he held regular meetings with German Social Democrats all over the Europe.
Continue Reading Below
After Marx’s death, Engels began editing Marx’s unfinished volumes of ‘Das Kapital’. With extensive research on the material Marx had left behind, Engels managed to put a final touch to Marx’s masterpiece.
Not only did Engels finish Marx’s work, but he successfully authored many books which are his great contribution to the world of literature. Engels’ work are widely read and used for research purposes.
He has penned down the book ‘The Origin of the Family, Private Property, and the State’ in which he argued about the changing structure of family over the period. Engles wrote the book when he was 64 years of age and quite experienced and knowledgeable. 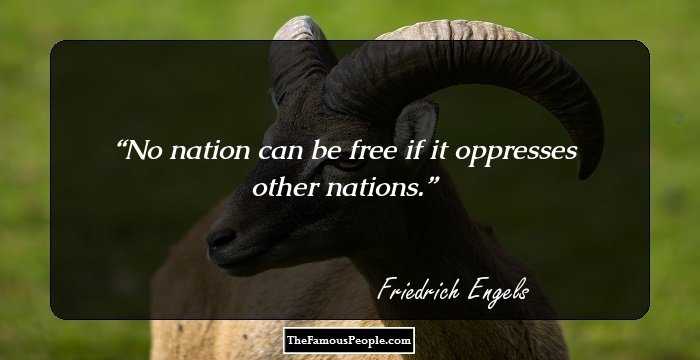 Major Works
While Friedrich Engels has penned down many articles and books in his lifetime, few of his books are still considered to be masterpiece. ‘The Communist Manifesto’ is still studied and read worldwide.
‘The Condition of Working Class in England’ was another notable work by Engels. In this book, he has analyzed the living conditions of the working class in Britain. This book was written during Engels’ stay at Manchester. The book also reflected Engels’ thoughts on socialism and its development. It was a huge hit among German readers and was considered to be a classic of its time. It is still influential with historians of British Industrialization.
Personal Life & Legacy
Friedrich Engels fell in love with Mary Burns during his stay at Manchester. She was an uneducated Irish working girl. They never got married but lived as husband and wife.
It is believed that due to Engels’ closeness to Mary, he was able to have a close look at the shameful and horrible side of British Imperialism. She was somewhere responsible in changing his mindset towards the working class.
Mary died in 1863 and Engels found solace in her younger sister Lizzy. Engels never intended to marry Lizzy like Mary Burns. However, he married Lizzy on 11th September 1878, but only because it was her dying wish.
Friedrich Engels died of throat cancer in London in 1895. As per his request, his ashes were dispersed from the Beachy Head which was situated close to Eastbourne. 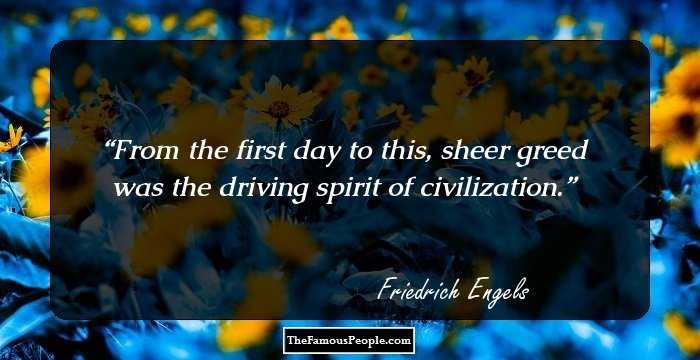 Trivia
When Friedrich Engel and Karl Marx met for the first time they didn’t like each other very much.
Friedrich Engel supported Marx and edited his masterpiece ‘Das Kapital’, but personally he didn’t like that work of Marx.
Engels always considered himself to be a ‘second fiddle’ to Karl Marx and always placed Marx before him.
Engels and Marx went through a rough patch in their friendship due to Engels’ girlfriend, Mary Burns.
Recommended Lists:
Writers #1290
Intellectuals & Academics #1041
Leaders #1084

Quotes By Friedrich Engels | Quote Of The Day | Top 100 Quotes

See the events in life of Friedrich Engels in Chronological Order