Dr Rajendra Prasad was the first president of independent India. His life has been truly inspiring for all Indians. A lawyer by training and an active Indian political leader, Prasad’s interest in Indian politics began as early as in 1911 when he the Indian National Congress. Despite having a contention for the Gandhian principles in the beginning, he later imbibed the true spirit of Gandhi by adopting him as his mentor, practicing self-discipline and working relentlessly in the non-cooperation movement. He toured many parts of the country, spreading the ideals and beliefs of Mahatma Gnadhi. Blessed with remarkable organisational capacity and leadership qualities, he thrice headed the Indian National Congress. When India finally gained independence from the British rule, he took over as a cabinet minister, slowly making his way to the chair of the President of the Constituent Assembly and later taking up the office of India’s President for two terms. Other than his political activities, he made several literary contributions as well. His most significant works are ‘India Divided’, ‘Satyagraha at Champaran’, ‘Atmakatha’ and ‘Since Independence’.
Continue Reading Below Indian Celebrities
Indian Men
University Of Calcutta
Male Leaders
Indian Leaders
Childhood & Early Life
Rajendra Prasad was born to Mahadev Sahai and Kamleshwari Devi at Zeradei, in the Siwan district of Bihar on December 3, 1884. He was the youngest kid of the family.
While his father, a scholar of Persian and Sanskrit language, was a dawning influence on young Prasad’s life and career, his mother took care of the moral upbringing, teaching him Indian mythology.
A meritorious student, he received his early education from Moulavi, an accomplished Muslim scholar, who taught him Persian, Hindi and arithmetic.
He later studied at the Chapra District School and T.K. Ghosh's Academy in Patna. For higher education, he moved to Calcutta where he secured a scholarship at the Presidency College, for a degree in science.
He later changed his stream of studies from science to arts, attaining his MA in Economics in 1907.
It was while in college that he first became acquainted with The Dawn Society and he became an active member of the same. In 1906, he played a crucial role in the formation of the Bihari Students Conference.
Completing his education, he took up the job of a professor of English at the Langat Singh College in Muzaffarpur and was soon was promoted as the principal.
In 1908, he left his chair of the principal to pursue a degree in law at the Calcutta City College, where he doubled up as a professor of Economics. In 1915, he graduated with honors with a Masters degree in Law, winning a gold medal. In 1937, he completed his Doctorate in Law from Allahabad University
Meanwhile in 1911, joined the Indian National Congress. 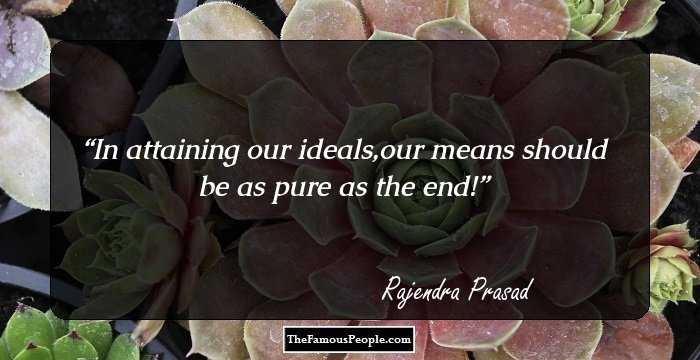 The Hottest Male Celebrities With The Best Abs
Career
Upon completing his legal studies, he took to working at the High Court of Bihar and Odisha in 1916. A year later, he was appointed as one of the first members of the Senate and Syndicate of the Patna University.
He, along with his volunteers, rendered support to Gandhi during his fact-finding mission in Champaran district of Bihar to address the grievances of the Indian peasants.
As soon as the Non-Cooperation Movement was passed by the Indian National Congress in 1920, he gave up on his legal career as well as his university duties to enter politics and work towards India’s freedom struggle whole-heartedly.
He actively participated in the non-cooperation movement, touring states, holding public meetings, collecting funds and inciting people for boycotting everything western - from schools, colleges to even government offices. As part of the movement, he urged people to give up on western clothes and adopt khadi.
Unlike others in the Indian Congress who misjudged Gandhiji’s suspension of the civil disobedience movement due to the violent route that it had taken, he stood by his mentor. He even replicated Gandhi’s Salt Satyagraha in Bihar for which he was imprisoned.
In 1934, he was elected the President of the Indian National Congress during the Bombay session. After the resignation of Subhash Chandra Bose as President of the INC in 1939, he again took up the responsibility. His main aim then was to mend the rift created in the Indian Congress due to the ideological differences between Bose and Gandhi.
In 1942, upon Congress’s authorization of the Quit India Movement, numerous Indian leaders were imprisoned and he was one amongst them. He stayed imprisoned at the Bankipur Central Jail for three years until his release on June 15, 1945.
After India's independence from the British-Raj, he served as one of the cabinet ministers of the Interim Government, taking charge of the Food and Agriculture Department.
In December 1946, he was elected as the President of Constituent Assembly, which was established to frame the Constitution of India.
On January 26, 1950, when the Constitution of Indian was adopted, he was elected as India’s first President. He served in the position for two terms until 1962, thus becoming the first and the only President of India to have been twice in the office.
During his role as the President of India, he adhered to the Presidential duties and acted independently of politics as expected by the President of India as per the Constitution. He played an active role in state affairs.
During his presidency, he toured numerous countries on mission of goodwill such as Japan, Ceylon, USSR, Indo-China, Malaya and Indonesia. He looked forward to establishing peaceful relations with other countries.
In 1962, after serving for twelve years as the President of India, he relinquished his duties as the President and moved to Patna where he stayed at the campus of Bihar Vidyapeeth. He spent his last years of retirement at the Sadaqat Ashram in Patna.
Awards & Achievements
For his unconditional contribution as a leader of the Indian National Congress and as the President of India, he was conferred with India’s highest civilian award - Bharat Ratna.
Personal Life & Legacy
He was married to Rajavanshi Devi at the age of twelve. The couple was blessed with a son - Mrityunjaya Prasad.
He breathed his last on February 28, 1963 at the Sadaqat Ashram in Patna.
Trivia
A Bharat Ratna recipient, he was the first President of free India and the only one to serve for two terms in the office of the President.
You May Like

See the events in life of Rajendra Prasad in Chronological Order