(One of the Architects of the Indian Constitution)

B.R. Ambedkar was a leading activist and social reformer who dedicated his life, working for the upliftment of the Dalits (the untouchables) and the socially backward class of India. A messiah for the downtrodden, Ambedkar continuously fought for the eradication of caste discrimination that had fragmented the Indian society. Born in a socially backward family, Ambedkar was the victim of caste discrimination, inequality, and prejudice. However, fighting against all odds, he received higher education, becoming the first ever untouchable to do so. After completing his studies, he launched himself politically, fighting for the rights of the depressed class and against the inequality practiced in the society. He was a crusader of social equality and justice. Academically trained as a jurist, he went on to become the first law minister of free India and the framer or chief architect of the ‘Constitution of India.’ In his later years, he acted as a revivalist of Buddhism in India. He converted to Buddhism, freeing himself of the perils of caste differences and unfairness practiced by the Hindus. Arvind Kejriwal
14th April In History
DID WE MISS SOMEONE?
CLICK HERE AND TELL US
WE'LL MAKE SURE
THEY'RE HERE A.S.A.P
Quick Facts

Quotes By B. R. Ambedkar Lawyers

Indian Celebrities
Social Reformers
Political Leaders
Civil Rights Activists
Indian Men
Childhood & Early Life
Ambedkar was born Bhimrao Ramji Sakpal on 14 April 1891, in Mhow, Central Provinces, British India, to Ramji Maloji Sakpal and Bhimabai. His father served in the Indian army. Ambedkar was the last of the 14 children born to his parents.
Belonging to ‘Mahar’ caste and considered among the untouchables, he suffered from socio-economic discrimination. However, due to special privileges given to the children of parents serving the army, he received good education.
A young Ambedkar faced a lot of problems during his school days but he managed to overcome his problems. In 1897, he along with his family moved to Bombay where he enrolled at ‘Elphinstone High School,’ becoming the first ever untouchable to receive higher education.
Completing his matriculation degree in 1907, he enrolled at ‘Elphinstone College’ in 1908, once again creating history by becoming the first untouchable to enter a university. He graduated from ‘Elphinstone College’ in 1912 with a degree in economics and political science.
He secured a job with the Baroda state government but did not continue his job for long as he was awarded a ‘Baroda State Scholarship,’ which provided him the opportunity to receive postgraduate education at ‘Columbia University’ in New York City. To pursue the same, he moved to America in 1913.
He completed his MA in June 1915, majoring in economics, with sociology, history, philosophy, and anthropology as other subjects of study. In 1927, he obtained a PhD in economics.
Meanwhile, in 1916, he enrolled for a bar course at ‘Gray’s Inn.’ However, due to the termination of his scholarship, he had to return to India. 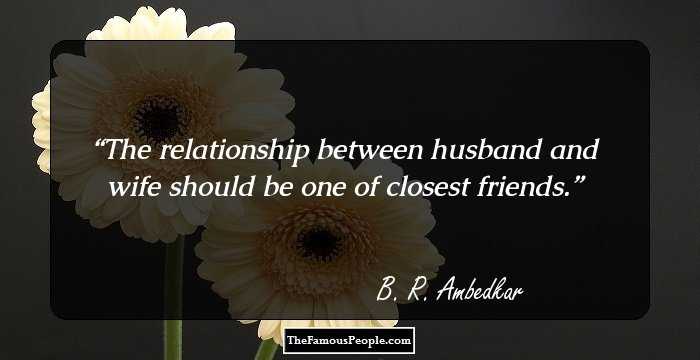 Quotes: Friends, Relationship
Continue Reading Below
Career
Upon returning to India, he worked as the defence secretary for the Princely State of Baroda. However, the work was not easy for him as he was often ridiculed and castigated for being an untouchable.
He quit his job as the defence secretary and took up jobs as a private tutor and accountant. He even established a consultancy business which failed to flourish due to his social status. He finally landed a job as a teacher at the ‘Sydenham College of Commerce and Economics’ in Mumbai.
A victim of caste discrimination, Ambedkar was inspired to uplift the pitiable state of the untouchables in the society. Thus, with the help of the Maharaja of Kolhapur, he founded a weekly journal called ‘Mooknayak’ which criticized the orthodox beliefs of the Hindus and the reluctance of politicians to fight against the discrimination.
Accumulating enough wealth, he moved to London to complete his education. In 1921, he received his master’s degree from ‘London School of Economics.’ Two years later, he acquired his D.Sc. in economics. After completing his law studies, he was admitted to the British bar as a barrister.
After returning to India, he started working as a legal professional in the country. His passion for eradicating the practice of caste discrimination led him to establish the ‘Bahishkrit Hitakarini Sabha.’ The main aim of the organization was to provide education to the backward class.
In 1925, he was appointed to ‘Bombay Presidency Committee’ to work under the ‘All-European Simon Commission.’ The commission reports were thrashed by the Congress which set up its own version of the Constitution of free India.
In 1927, he actively worked against untouchability. Instead of taking the route of violence, he followed in the footsteps of Gandhi and led a ‘Satyagraha’ movement. He fought for the rights of the untouchables who were denied access to the main water source and temples.
In 1932, due to his rising popularity as a crusader, he received an invitation to attend the ‘Second Round Table Conference’ in London. At the conference, he demanded a separate electorate for the depressed class, but his views were opposed by Gandhi.
Finally, he reached an understanding with Gandhi and settled for the ‘Poona Pact,’ according to which a reservation was granted to the depressed class in the regional legislative assemblies and Central Council of States.
Continue Reading Below
In 1935, he was appointed as the principal of the ‘Government Law College,’ a position he retained for two years. The following year, he founded the ‘Independent Labour Party,’ which went on to secure 14 seats in the 1937 Bombay elections.
In 1936, he published his book ‘The Annihilation of Caste’ in which he ridiculed Hindu orthodox leaders and condemned the caste system practiced in the country. Next, he came up with his work ‘Who Were the Shudras?’ in which he explained the formation of the untouchables.
As soon as India became independent, he administered the transformation of his political party into the ‘All India Scheduled Castes Federation.’ However, the party did not perform well at the 1946 elections, held for the ‘Constituent Assembly of India.’
He served as the minister for labour for the ‘Viceroy's Executive Council.’ He also served on the board of the ‘Defence Advisory Committee.’ It was his dedication that earned him the chair of free India’s first law minister. He also became the chairman of the drafting committee of the ‘Constitution of India.’
The Constitution drafted by him aimed at bringing about a social revolution in the country and freeing it from any sort of discrimination. It provided the citizens with freedom of religion, abolished untouchability, advocated rights for women, and bridged the gap between the different classes of the society.
Other than his role as the framer of the Constitution, he also helped establish the ‘Finance Commission of India.’ It was through his policies that the nation progressed both economically and socially. He emphasized on free economy with a stable rupee.
He rejected the ‘Aryan Invasion Theory’ which describes the origin of the Aryans outside the Indian sub-continent. He came to a conclusion that the Aryans originally belonged to India.
In 1951, following the indefinite stalling of the ‘Hindu Code Bill’ which was proposed by him, he resigned from the Cabinet. He contested for a seat at the ‘Lok Sabha’ but was defeated. He was later appointed to the ‘Rajya Sabha’ and remained a member of the ‘Rajya Sabha’ until his death. 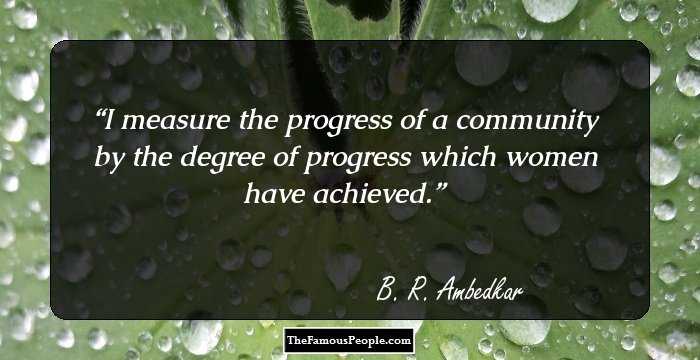 Quotes: Women, I
Continue Reading Below
Personal Life & Legacy
In 1906, he married Ramabai, who was just nine years old at the time. In 1912, the couple was blessed with a son named Yashwant. Apart from Yashwant, they had four other children, who died in infancy.
In 1935, Ramabai breathed her last when she succumbed to a long-term illness.
It was while undergoing treatment for neurotic pain and lack of sleep that he first met Dr. Sharada Kabir. The two eventually got married on April 15, 1948. Post her wedding, she renamed herself Savita Ambedkar.
He got converted to Buddhism after attending a convention of Buddhist scholars in Sri Lanka. Inspired by their preaching, he wrote a book on Buddhism. After his conversion to Buddhism, he founded the ‘Bharatiya Bauddha Mahasabha’ (Buddhist Society of India) in 1955. He completed his final work ‘The Buddha and His Dhamma’ in 1956. The book was published posthumously.
His deteriorating health worsened further as he suffered from diabetes and weak eyesight. He breathed his last in his home on December 6, 1956.
Since he had converted to Buddhism, a Buddhist-style cremation was organized for him. The ceremony was attended by hundreds of thousands of supporters, activists, and admirers.
To commemorate his contribution to the society, a memorial was constructed and established. His birthday, celebrated as ‘Ambedkar Jayanti’ or ‘Bhim Jayanti,’ is a public holiday in India.
In 1990, he was posthumously awarded India's highest civilian honor, ‘Bharat Ratna.’
Trivia
This revolutionary, who fought against the untouchability practiced in India, is popularly known as the chief architect of the ‘Constitution of India.’
Continue Reading Below 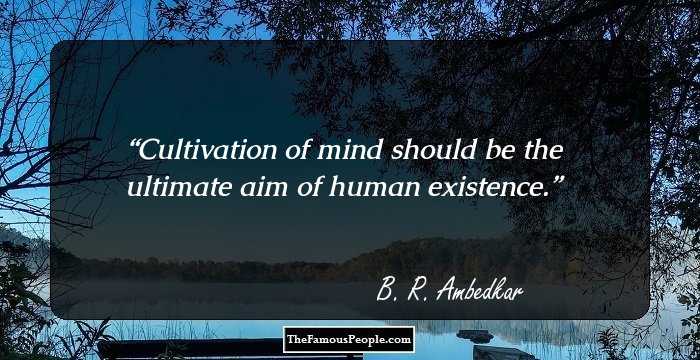 Top 10 Facts You Did Not Know About B.R. Ambedkar
Ambedkar played a key role in the establishment of ‘Reserve Bank of India’ in 1935.
He had suggested the division of Madhya Pradesh and Bihar for better governance way back in 1955.
He wanted to sponsor Sanskrit as the official language of the Indian union.
Ambedkar contested the ‘Lok Sabha’ election twice, failing to win the election on both occasions.
His autobiography ‘Waiting for a Visa’ is used as a text book in the ‘Columbia University.’
He opposed the whole idea of reservation of jobs and constituencies and didn’t want the reservation system to exist at all.
He was the first Indian to complete a doctorate degree overseas.
Ambedkar was the one who insisted on reducing the working hours from 14 to eight hours a day in India.
He strongly opposed ‘Article 370’ of the Indian constitution which gave special status to the state of Jammu & Kashmir.
He played a key role in forming the ‘National Employment Exchange Agency’ in India.
Recommended Lists:
Social Reformers #4
Miscellaneous #105
Activists #39
Leaders #108
Lawyers & Judges #17

See the events in life of B. R. Ambedkar in Chronological Order