Hilaire Belloc was a writer, orator, poet, and historian of Anglo-French origin. He was deeply religious and held a strong Catholic faith which was often reflected in many of his writings. A prolific writer, he wrote many poems, fiction, essays, biographies, and a great many letters. His works covered a variety of genres ranging from children’s literature, to history and economics. He had a deep interest in politics and served as a Liberal Party Member of Parliament for Salford South for five years. He had strong views against capitalism and was a member of the Fabian society, a socialist debating group. He came into contact with well known authors like George Bernard Shaw and H.G.Wells who helped him in getting jobs in the literary circle. He was an aggressive debater who during his later years became disillusioned with the concept of socialist reforms; his anti-socialist views are well depicted in his book ‘The Servile State’. A versatile writer, he wrote novels like ‘A Change in the cabinet’ and ‘Pongo and the Bull’. He also wrote works of history and economics, which were critically acclaimed, though his undisputable claim to fame was the children’s book ‘Cautionary Tales for Children’ for which he is best known. He wrote in a simple, clear and concise style, avoiding excessive usage of idioms and aphorisms. British Celebrities
French Celebrities
Historians
Political Writers
British Men
French Men
Childhood & Early Life
Hilaire Belloc was born in a village near Paris to Louis Belloc, a French lawyer and Elizabeth Rayner Parkes, an English writer. He had one elder sister.
He was just a toddler when his father died and his mother took the children to England where he spent most of his boyhood.
He went to John Henry Newman’s Oratory School and served a stint in the army after that.
In 1892, he enrolled in Balliol College, Oxford from where he earned a first class honours degree in History. He served as the president of the Oxford Union, a debating society and created a reputation for himself as a brilliant speaker.
As an honours graduate, he was hopeful of receiving a Fellowship and was bitterly disappointed when he did not. He attributed this failure to his deep Catholic faith believing that he was discriminated against because of his religion. 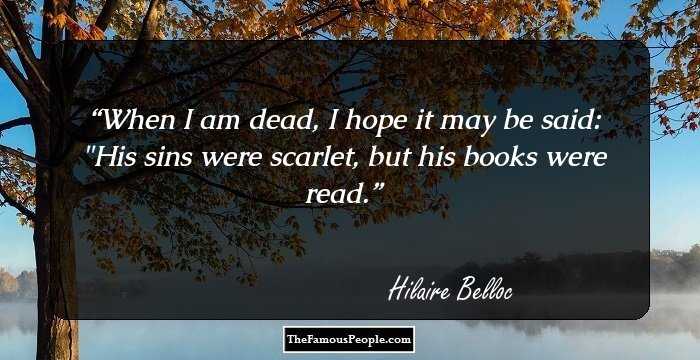 Quotes: Hope, Books, I
Continue Reading Below
You May Like

Who Is The Most Popular BTS Member?
Career
His writing career began in 1896 when he published two of his works. The first was a collection of poems titled, ‘Verses and Sonnets’ while the second one was a humourous children’s book, ‘The Bad Child's Book of Beasts’.
The success of ‘The Bad Child’s Book of Beasts’ prompted him to publish ‘More Beasts for Worse Children’ in 1897. It was followed by a collection of poems ‘The Modern Traveller’ in 1898.
He published studies, novels and historical works over the next few years, the most notable of them being: ‘Paris, Its Sites, Monuments and History’ (1898), ‘Lambkin's remains’ (1900), ‘The Path To Rome’ (1902) and ‘Emmanuel Burden, Merchant’ (1904).
Between 1910 and 1920, he produced many works of fiction, non-fiction, essays and criticisms. It was during this period that he produced his well known book on economics, ‘The Servile State’ (1912). He also wrote ‘Warfare in England’ (1913), ‘A Change in the Cabinet’ (1915), and ‘The Free Press’ (1918).
In 1914, he found a job as the editor of ‘Land and Water’, a British weekly journal that covered the progress of the World War I. He held this position till 1920.
Ever the prolific writer, he published several collections of poems, novels, and novellas from 1920 to 1930. His most popular work of the decade was his series of articles criticizing H. G. Wells's ‘Outline of History’ which he consolidated and published as a volume titled ‘Mr.Belloc Still Objects’ (1926).
He published many books related to religion such as ‘Essays of a Catholic Layman in England ‘(1931), ‘How We Got the Bible’ (1934), and ‘The Church and Socialism’ (1938). His historical pieces for the 1930s consisted of ‘William the Conqueror’ (1933), ‘Monarchy: a study of Louis XIV’ (1938), and ‘The Last Rally: A Story of Charles II’ (1939).
He continued writing during the 1940s as well, but by now his career was on the decline. Some of the works created till his death are ‘The Catholic and the War’ (1940), ‘Sonnets and Verse’ (1945), and ‘World Conflict’ (1951). 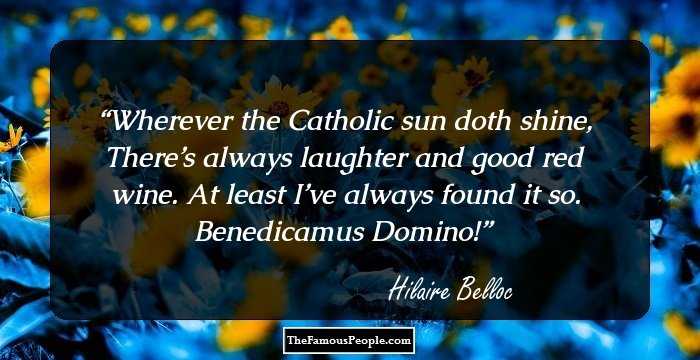 Continue Reading Below
Major Works
Belloc is best known for his illustrated 1896 children’s book, ‘The Bad Child's Book of Beasts’. It was a collection of poems that give humourous advice to children. The book sold over 4000 copies, which was an enormous figure during those times.
His book ‘Cautionary Tales for Children’ (1907) was a collection of satirical tales of caution spoofed on the popular tales of the 19th century. The tales were written in rhyming couplets.
His work on economics, ‘The Servile State’ which he published in 1912, outlines his ideas and concepts regarding the economic history of Europe. It was one of his better known books.
When H.G. Wells published his ‘Outline of History’, Belloc criticized certain theories in the book and wrote a series of reviews highlighting his objections. He then published the collection of reviews in form of a book titled, ‘Mr.Belloc still Objects’ in 1926. The publication of the book cemented his reputation as an aggressive debater.
Personal Life & Legacy
He met American Elodie Hogan in 1890 and fell hopelessly in love with her. The young couple braved family opposition and got married in 1896. They had a happy marriage that produced five children and lasted till Elodie’s death in 1914.
He had a stroke in 1941 and suffered from its side-effects for as long as he lived. He died in 1953 at the age of 83. 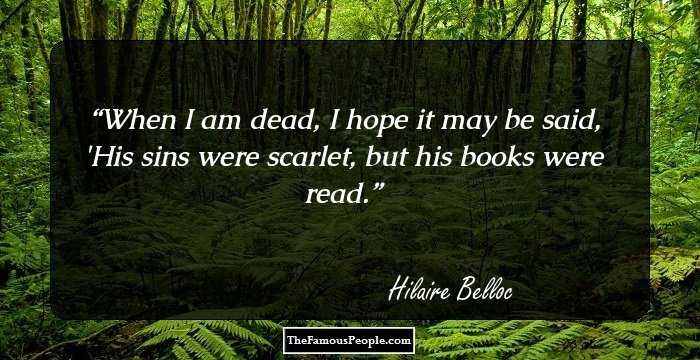 Quotes: Hope, Books, I
Trivia
He was nicknamed ‘Old Thunder’ because of his fierce argumentativeness.
He was considered one of the ‘Big four of Edwardian letters’ along with H.G.Wells, George Bernard Shaw, and G. K. Chesterton.
His sister Marie Adelaide Lowndes was also a famous novelist.
Recommended Lists:
Writers #2848
Intellectuals & Academics #1097
You May Like

Quotes By Hilaire Belloc | Quote Of The Day | Top 100 Quotes

See the events in life of Hilaire Belloc in Chronological Order