Advanced Search
Rupert Brooke was an English poet who is widely known for his poem ‘The Soldier’, which was a part of five war sonnets. His father was William Parker Brooke, a Rugby schoolmaster at the Rugby School and his mother was Ruth Mary Brooke. He passed out from his father’s school and then went to King’s College, Cambridge. Already blessed with boyish good looks, he proved to be highly intellectual and extremely athletic and became quite known in the college. While, and after studying, he established friendships with contemporaries and became a part of numerous literary groups including the Bloomsbury group, the Georgian Poets and the Dymock Poets. On the other hand his love life remained in tandem with his social life and he had affairs with several women. While writing his poems he eschewed from Victorianism; poems from the early part of his career revolved around love which gradually developed into love for the country as his short career unfolded. He volunteered for service in the First World War, but hardly saw any action in Antwerp. He soon started suffering from war-time illnesses and developed sepsis from an infected mosquito bite. His health declined considerably and the young and charming literary genius bid adieu to the world at the age of 27 British Celebrities
British Men
Cambridge University
Leo Poets
Leo Writers
Childhood & Early Life
Rupert Brooke was born on August 3, 1887 in Rugby, Warwickshire to William Parker Brooke and Ruth Mary Brooke. He had two brothers, one elder and one younger.
He received his schooling from Hillbrow School and Rugby School. He then won a scholarship to King’s college, Cambridge. Handsome and charming, he also excelled in sports and studies and became quite a popular character in the college.
In college he became a visible figure in English intellectual circles and established friendships with E M Forster, Virginia Woolf and the likes. He was the president of the Cambridge University Fabian Society and helped found the Marlowe Society drama club.
In 1910, he replaced his recently deceased father at Rugby School for a term before coming back to Cambridge. For the next three years, he travelled and wrote poems extensively. 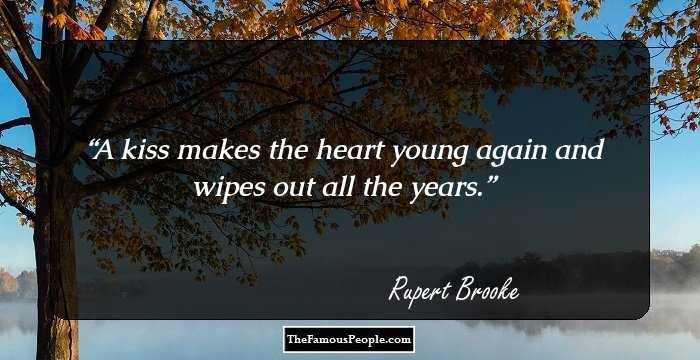 Quotes: Heart, Young
Continue Reading Below
Career
After Cambridge, Rupert Brooke moved to Grantchester to work on his thesis and poems. His first book was titled ‘Poems’ and it was released in 1911. As a tribute to this city he penned the poem ‘The Old Vicarage, Grantchester’, in 1912.
Through his writings he along with several other poets of that era, shunned Victorianism in favor of realism, as they believed it was more descriptive and painted a better portrait of real-life incidents.
He was a member of the Dymock Poets, along with Robert Frost, Edward Thomas, Wifrid Gibson, John Drinkwater and Lascelles Abercrombie. The group lived near the village of Dymock in Gloucestershire in the time period between 1911 and 1914.
In 1912, he along with Edward Marsh, Walter Mare, John Masefield, and others compiled an anthology of the works of his peers titled ‘Georgian Poetry, 1911-1912’.
The year 1912 ended on a turbulent note as his mind was preoccupied with sexual confusion, followed by the rejection of his lady-love. He suffered a nervous breakdown and spent several months in rehabilitation trips to Germany.
In between May 1913 and June 1914 he wrote 15 articles for Westminster Gazette. The articles were about his trips to Canada, America, various Pacific Islands and New Zealand.
After returning to England he found more fame and acknowledgement. He campaigned in support of Poor Law reform and his social circle now included Henry James, Bernard Shaw, Cathleen Nesbitt and Violet Asquith.
Within a few months, World War I began and he wished to volunteer in the war. He applied for a commission in the Royal Navy Division and got it easily as Edward Marsh, his financer and friend, was the secretary to Winston Churchill, then First Lord of the Admiralty.
Commissioned with the Royal Navy Volunteer Reserve as a temporary Sub-Lieutenant, he sailed with the group to Antwerp, Belgium. Antwerp saw no major military action during the stay of the battalion and Brooke made the most of this peaceful time and penned his most famous work – a group of five war sonnets titled ‘1914 & Other Poems’.
In February 1915 he headed out for Dardanelles with the British Mediterranean Expeditionary Force but the course of the expedition was changed mid-route. The unit landed in Egypt where he contracted dysentery.
By April the unit was on move again and Brooke still hadn’t recovered well enough. A mosquito bite developed into blood poisoning and his already ailing body couldn’t handle the strain. 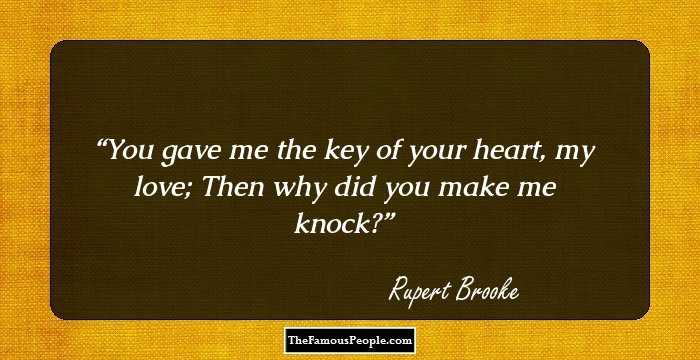 Quotes: You, Me, Heart
Major Works
Rupert Brooke’s most famous works are the five war-sonnets titled ‘1914 & Other Poems’. In the sonnets he tries to convey to his readers how this oncoming war is a good sign for the changes to come, which wouldn’t be possible without it. He believes the people who live to see the days after the war would be very fortunate as they would see the birth of a new generation; but the ones who might not be so lucky have nothing to fear as the war would bring an end to their ever-prevailing sufferings and conditions. Further on he goes to the extent of imagining his own death but isn’t sad about dying for his country and thinks of it as a noble sacrifice for his brethren.
Awards & Achievements
Rupert Brooke was awarded a fellowship from King’s College in 1913 for his dissertation on Webster. 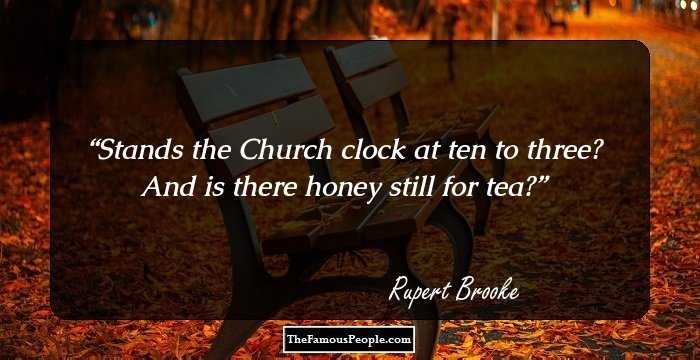 Personal Life & Legacy
Rupert Brooke had many lady-loves but he was married to none. He was engaged to Noel Olivier once. After her he had brief relationships with Bloomsbury group-member Virginia Woolf, a Tahitian woman named Taatamata and actress Cathleen Nesbitt.
He died of sepsis on 23 April 1915, at the age of 27.

Quotes By Rupert Brooke | Quote Of The Day | Top 100 Quotes

See the events in life of Rupert Brooke in Chronological Order