Alfred Noyes was an English author, one of the most prolific writers of the 20th century, notably known for his ballads ‘The Highwayman’ and ‘The Barrel-Organ’. He was a determined person and decided to pursue writing as his profession during his graduation years. His passion for becoming a writer is evident from an incident when he skipped an exam to meet a publisher with reference to his first poetry collection, a decision which cost him his graduation degree. Eventually he published his poetry collections over the years and created a place for himself among other authors. He created an entrancing atmosphere through his poetry which captivated the reader’s attention. In addition to being a marvelous poet, he was a critic, essayist, short story writer, novelist, biographer, autobiographer and a dramatist. He incorporated different themes in his literary masterpieces which include everyday life, science, religion, romance, England’s history and the danger of the sea. Despite having so much talent and a unique persona, he was criticized for his writing style and was never recognized as a significant poet by most literary schools in his time. It was in the early twentieth century that his works were truly appreciated and he was considered a highly influential author by the literary society. place of death: Isle of Wight

British Celebrities
Playwrights
Short Story Writers
British Men
Virgo Poets
Childhood & Early Life
He was born on September 16, 1880 in Wolverhampton, England to Alfred Adams, a grocer and teacher, and his wife, Amelia Adams. His father taught him Latin and Greek.
At the age of four, his family moved to Aberystwyth, Wales where he drew his initial inspiration from the Welsh coast and mountains.
In 1898, he attended the Exeter College. He excelled at rowing during his graduation years but left college without completing his graduation.
In 1902, he preferred to meet a publisher, over appearing in one of his final exams, to arrange the publication of his first volume of books. Due to this incident, he was unable to obtain a graduation degree. 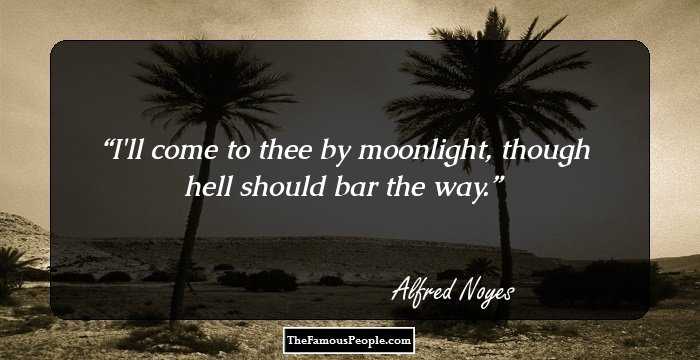 Who Is The Most Popular BTS Member?
Career
His first collection of poems, ‘The Loom of Years’, was published in 1902. It received appreciation by well-known poets such as William Butler Yeats and George Meredith.
With the publication of his subsequent poetry collections, ‘The Flower of Old Japan’ (1903) and ‘Poems’ (1904), which included one of his most popular poems titled ‘The Barrel-Organ’, he established his distinct reputation of being a poet.
He published his most famous poem ‘The Highwayman’ in the August 1906 issue of Blackwood's Magazine. His other major work in poetry, a two-hundred page epic about life at sea, ‘Drake’, was published in two volumes in 1906 and 1908.
Other examples of his historical narrative verse include ‘Forty Singing Seamen’ (1907) and ‘The Golden Hynde’ (1908). His only full-length play, ‘Sherwood’, was published in 1911.
In 1914, he accepted the post of a visiting professor at the prestigious Princeton University where he taught English Literature for the next nine years, until he resigned in 1923.
Among his short stories, most of which he described as fantasies, are ‘Walking Shadows’ (1918) and ‘The Hidden Player’ (1924).
He was also a novelist and some of his novels include, ‘The Return of the Scare-Crow’ (1929) and ‘The Last Man’ (1940).
He is also noted for being a literary critic and his criticisms include ‘Some Aspects of Modern Poetry’ (1924), ‘The Opalescent Parrot’’ (1929) and ‘Pageant of Letters’ (1940).
Some of his other literary works include ‘The Forest of Wild Thyme’ (1905), ‘Collected Poems’ (1950), ‘A Letter to Lucian’ (1956) and ‘The Accusing Ghost’ (1957).
Continue Reading Below
His autobiography, ‘Two Worlds for Memory’, was published in 1953. 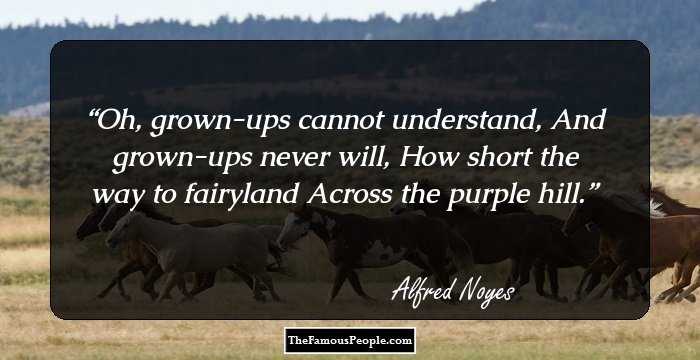 Quotes: Never
Major Works
His most ambitious work was his poetic trilogy saga, ‘The Torch-Bearers’, which comprises of ‘Watchers of the Sky’ (1922), ‘The Book of Earth’ (1925) and ‘The Last Voyage’ (1930). It deals with the history of science and its progress over the ages. It is regarded as one of his most remarkable works of all times.
His most notable work is his ballad ‘The Highwayman’ (1906), a romantic tragedy about the ill-fated love of a highwayman and an innkeeper's daughter. In 1995, it was voted 15th in the BBC's poll for ‘The Nation's Favorite Poems’.
His other acclaimed works include his poetry collections, ‘The Flower of Old Japan’ (1903) and ‘Drake’ (1906-1908).
Awards & Achievements
In 1918, he was honored with the ‘Order of the British Empire’, the most junior and most populous order of chivalry in the British and other Commonwealth honors systems.
In 1913, he received the honorary academic degree of ‘Doctor of Letters’ from the prestigious Yale University, Connecticut, U.S. 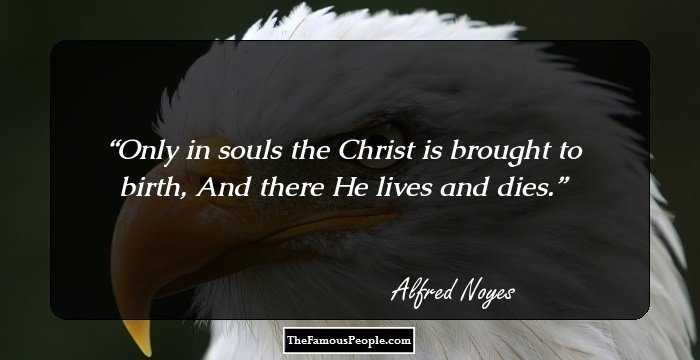 Personal Life & Legacy
In 1907, Noyes married Garnett Daniels, youngest daughter of a U.S. Civil War veteran. They were blessed with three children. Garnett died in 1926 at Saint-Jean-de-Luz, France, where they were staying with friends.
In 1927, he married Mary Angela née Mayne, widow of Lieutenant Richard Shireburn Weld-Blundell, who had been killed in World War I. They also had three children; Hugh, Veronica and Margaret.
He passed away on June 25, 1958 in Isle of Wright, at the age of 77. He is buried in the Roman Catholic cemetery at Freshwater, Isle of Wight.
Recommended Lists:
Writers #3750
You May Like

Quotes By Alfred Noyes | Quote Of The Day | Top 100 Quotes

See the events in life of Alfred Noyes in Chronological Order