William Godwin was the father of philosophical anarchism, and was also a prominent a novelist and journalist. He is best-remembered for two of his works, ‘An Enquiry Concerning Political Justice’ and ‘Things as They Are; or, The Adventures of Caleb Williams’, which received great acclamation from all around the world. Owing to the success of both of his novels, soon he became a known face in the radical circles of London. A brilliant writer, he also influenced the British culture to a great extent. The French revolution profoundly influenced the course of Godwin’s career and he gave up his position as minister of Beaconsfield, in order to give wings to his literary dreams. Godwin’s political ideas influenced great writers like Lord Byron and Percy Bysshe Shelley. Towards the end of his life, he concentrated on writing novels, the post popular ones being, ‘Mandeville’, ‘Cloudesley’ and ‘Deloraine’. He also wrote a collection of interesting essays on education, literary and social topics and, for some time, focused on writing children’s primers on Biblical and classical history. Today, he is remembered as one of those literary and political figures who contributed immensely in shaping British literature and culture. Explore this biography to learn more about his life and works. Geri Halliwell
Philosophers #218
Writers #1400
Intellectuals & Academics #481
DID WE MISS SOMEONE?
CLICK HERE AND TELL US
WE'LL MAKE SURE
THEY'RE HERE A.S.A.P
Quick Facts

British People
Philosophers
British Men
Male Writers
Pisces Writers
Childhood & Early Life
William Godwin was born into a middle class family in Cambridgeshire, England. His parents followed Calvinism strictly. His father who served as a Nonconformist minister in Guestwick, Norfolk passed away at a young age.
He attended the Hoxton Academy, where he studied under eminent personalities like Andrew Kippis, Robert Sandeman and Dr. Abraham Reese. 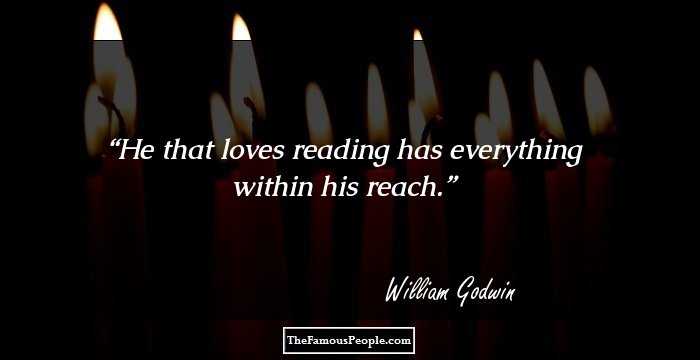 Famous Beautiful Women With Green Eyes
Career
He served as the minister at Ware, Stowmarket and Beaconsfield, before he left for London in 1782.
While in London, his first work, titled, ‘Life of Lord Chatham’, was published in 1783.
He authored ‘Sketches of History’, which was published in 1784. This book contained six sermons on the characters of Jesus, Aaron and Hazael.
In 1793, while the French Revolution was in full-swing, he published a full treatise on political science, titled, ‘Enquiry concerning Political Justice, and its Influence on General Virtue and Happiness’.
‘Things as They Are; or The Adventures of Caleb Williams’ was published in 1794 which was written to popularize the ideas presented in the former book, ‘Political Justice’.
His writings laid the foundations for the mutually contradictory doctrines of communism and anarchy which could be seen in a collection of his writings ‘The Enquirer’, ‘St. Leon’, ‘Thoughts on Man: His Nature, Production, and Discoveries’, written between 1797 and 1831.
Apart from novels, he tried his hand at drama with two plays, ‘Antonio’ in 1800 and ‘Faulkener’ in 1807, both of which were unsuccessful.
He wrote a four-volume book called ‘The History of the Commonwealth’, between 1824 and 1828.
His last work was the book, ‘The Lives of the Necromancers’, which was published in 1834.
Continue Reading Below 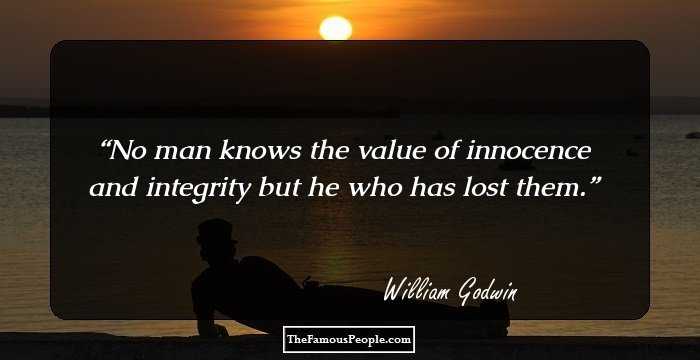 Major Works
‘Enquiry Concerning Political Justice and its influence on Morals and Happiness’ was published in 1793 and outlined Godwin’s political philosophy. This book was revered by First Generation poets like William Wordsworth and Samuel Taylor Coleridge. The work is considered one of his masterpieces to date.
‘Things as They Are; or, The Adventures of Caleb Williams’ was published on May 12, 1794 which is a three-volume novel. The publication attracted a great deal of positive reviews and was later staged by Richard Brinsley Sheridan.
Personal Life & Legacy
He married the feminist writer, Mary Wollstonecraft in 1797 and wrote a candid biography of her after her sudden death. He had a daughter, Mary Shelley Godwin, who wrote ‘Frankenstein’ and married Percy Bysshe Shelley, the poet.
He got married a second time, to Mary Jane Clairmont, who influenced him to write children’s primers on classical history.
He passed away at the age 80, on April 7, 1836, in London, England. 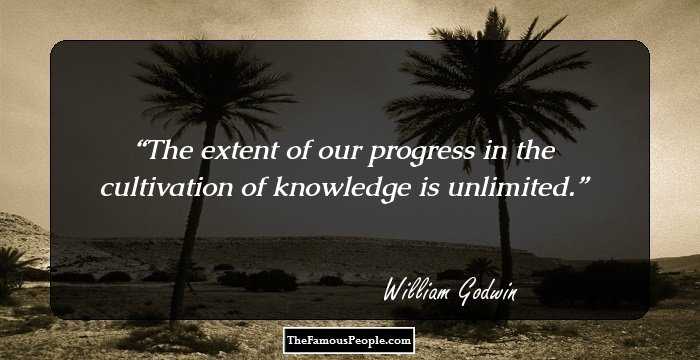 Trivia
This famous author often wrote children’s books under the nom de plume, ‘Edward Baldwin’.
This famous novelist lived in isolation for about 30 years because of his disreputable standing.
You May Like

Quotes By William Godwin | Quote Of The Day | Top 100 Quotes

See the events in life of William Godwin in Chronological Order