(Austrian–British Economist, Philosopher and Winner of the 1974 Nobel Prize in Economic Sciences)

Friedrich von Hayek was a Nobel Prize winning Austrian-British economist and philosopher, best known for his defense of classical liberalism. Born towards the end of the 19th century in Vienna, he received his education at the University of Vienna. He began his academic career at his alma mater before moving to London School of economics where he taught for almost two decades. A staunch supporter of classical liberalism, he soon got embroiled in an academic conflict with Lord Keynes over the latter’s support of welfare state and totalitarian socialism, writing number of papers in his defense. Meanwhile in 1937, he became a British citizen and remained so for rest of his life in spite of the fact on leaving Great Britain in 1950, he never returned to the country. He spent rest of his career at the University of Chicago, Albert Ludwig University of Freiburg and University of Salzburg, working tirelessly till the end on a wide variety of topics. Friedrich shared the 1974 Nobel Prize in Economics with Gunnar Myrdal. Joseph Schumpeter
DID WE MISS SOMEONE?
CLICK HERE AND TELL US
WE'LL MAKE SURE
THEY'RE HERE A.S.A.P
Quick Facts

Austrian Celebrities
British Celebrities
Philosophers
Austrian Men
British Men
University Of Vienna
Childhood & Early Life
Friedrich August von Hayek was born on 8 May 1899, in Vienna, into an academically distinguished family. His father, August von Hayek, was a physician with a passion for botany. Employed with the municipality, he also taught at Hochschule für Bodenkultur and is remembered for his role in phytogeographical investigations.
Friedrich’s mother, Felicitas Hayek née von Juraschek, was the daughter of a leading economist and a statistician. She came from a wealthy, land-owning family, inheriting substantial amount on the death of her mother.
Friedrich was the eldest of his parents’ three children; having two younger brothers named Heinrich and Erich. From his childhood, he displayed an intellectual bent of mind. Although his brothers were slightly younger than him, he never felt at ease with them, preferring to interact with elders.
He was also far advanced in academics, and learnt to read fluently before he reached school going age. During his teens, he enjoyed reading the works of Hugo de Vries and Ludwig Feuerbach. A lecture on Aristotelian ethics at school also impressed him a lot.
In 1917, during the later stages of World War I, Hayek’s education was interrupted for a brief period, when he joined the Austro-Hungarian army as an artillery officer on the Piave front in northern Italy. During the war, he was decorated for bravery, but suffered damage in left ear.
The war played a decisive influence on his later career. Determined not to let such wars happen again, he enrolled at the University of Vienna in 1918 with both law and psychology; but later concentrated on law, becoming doctor juris (Dr. Jur.) in 1921.
In 1921, Hayek founded ‘Geistkreis’ along with few other social scientists such as Machlup, Gottfried von Haberler, and Oskar Morgenstern. Young and bright, more than half of the group members later became internationally famous for their contribution to theIR respective field.
In 1923, he acquired his second doctorate; this time on political economy. During his final year, Austrian economist, Friedrich von Wieser, was one of his professors and young Hayek was highly influenced by him. Another person to influence him was Carl Menger, known for explanatory strategy of social science.
Soon after completion of his final examination, Hayek acquired a part time job on the recommendation of Wieser, working on the legal and economic details of the Treaty of Saint Germain. Here, he met Ludwig von Mises, a monetary theorist, who later became his mentor.
In March 1923, Hayek went to New York for his post graduate work, remaining there till June 1924. Working as a research assistant to Prof. Jeremiah Jenks of New York University, he helped to compile data on the operations of the US Federal Reserve. 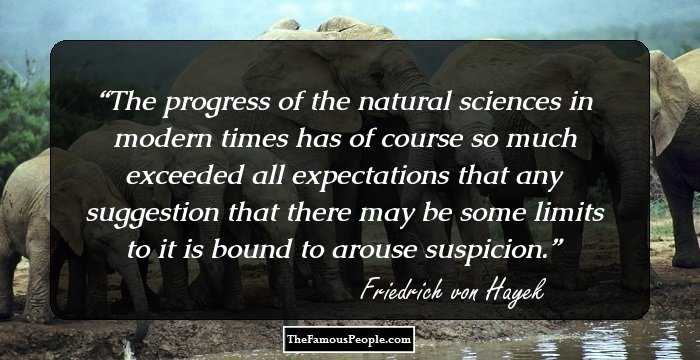 Continue Reading Below
Early Career
On his return to Vienna in the middle of 1924, Friedrich Von Hayek took up a job at a civil service office. Sometime now, he read ‘Socialism’ by Ludwig von Mises and became more sympathetic to Carl Menger’s classical liberalism than towards Wieser’s democratic socialism. Subsequently, he joined Ludwig’s academic circle.
He was also greatly stimulated by the advanced techniques, developed in the recent years, for forecasting industrial fluctuations and analyzing time series. He now started publishing number of articles in these fields and also arranging number of private seminars.
In 1927, he helped Mises to set up ‘Österreichisches Institut für Konjunkturforschung’ (Austrian Institute for Business Cycle Research), eventually becoming its first Director, a position he held until he left for London in 1931. Today, with a pool of forty economists, it is the largest research institute in Austria.
In 1929, on completion of his habilitation, Hayek joined University of Vienna as a lecturer. In the same year, he had his first book, ‘Monetary Theory and the Trade Cycle’ published.
In January 1931, he gave a series of lectures at the London School of Economics and Political Science. Later in the same year, these lectures were published as ‘Prices and Production’ and more importantly, led to his appointment as Tooke Professor of Economic Science and Statistics in the University of London. 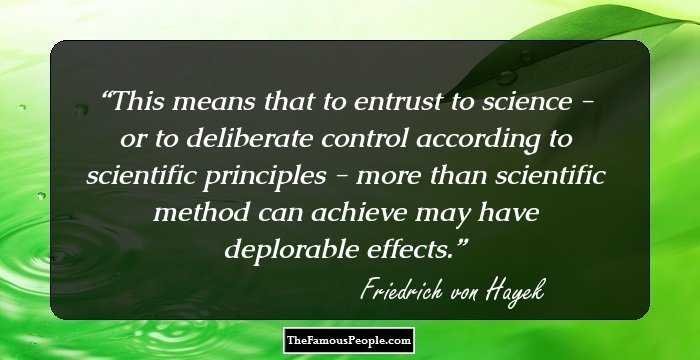 In London
In late 1931, Hayek took up his position at the London School of Economics (LSE). Very quickly, he gained recognition as an eminent economist, at the same time becoming embroiled in a debate with John Maynard Keynes of Cambridge University.
While Keynes preached increased government expenditures and lower taxes to stimulate demand and pull the global economy out of the Depression, Hayek suggested that private investment in the public markets was a better road to prosperity. He also wrote a long and critical review of Keynes’ book, ‘A Treatise on Money’ (1930). In response Keynes vehemently attacked Hayek’s ‘Prices and Production’ (1931).
Very soon, other economists got embroiled into the debate, many of them criticizing both of them, causing them to rethink their theory. In 1936, Keynes had his most famous book, ‘The General Theory of Employment, Interest and Money’ published while Hayek took five more years to publish his.
Continue Reading Below
Hayek remained with the LSE till 1950. Some of the would-be famous economists who studied with him during this period were Arthur Lewis, Ronald Coase, John Kenneth Galbraith, Abba Lerner, Nicholas Kaldor, George Shackle, Thomas Balogh, Vera Smith, L. K. Jha, Arthur Seldon, Paul Rosenstein-Rodan, and Oskar Lange.
He also continued writing, producing number of papers and books. Among them, most famous were ‘Monetary Nationalism and International Stability' (1937), 'Profits, Interest & Investment' (1939), ‘The Pure Theory of Capital’ (1941), 'The Road to Serfdom' (1944) and 'Individualism and Economic Order' (1948).
Among his works during this period, ‘The Pure Theory of Capital’ was in reply to Keynes attacks. But due to the on-going war, it failed to attract as much notice as Keynes’ ‘The General Theory of Employment, Interest and Money’ did.
In Chicago
In 1950, on receiving an invitation from Robert Hutchins, the President of the University of Chicago, Friedrich von Hayek left LSE to join Chicago University. His contentious divorce from his first wife, which did not go down well with many of his colleagues, might have also played a role in this.
At that time, a conflict was going on between Hutchins and the Department of Economics. As Hayek’s name was proposed by Hutchins, it was rejected by the department. Therefore In Chicago, Hayek received his appointment as the Professor of Social and Moral Science at the Committee on Social Thought.
Here, he mostly worked on the philosophy of science, economics, political philosophy, and the history of ideas, arranging many faculty seminars that were attended by many notable personalities. Many well-known scholars also cooperated with him in his research projects.
He remained in Chicago until 1962, producing many valuable papers. Among them, most important works are ‘The Counter-Revolution of Science: Studies on the Abuse of Reason', 'The Sensory Order: An Inquiry into the Foundations of Theoretical Psychology', both published in 1952 and 'The Constitution of Liberty’, published in 1960. 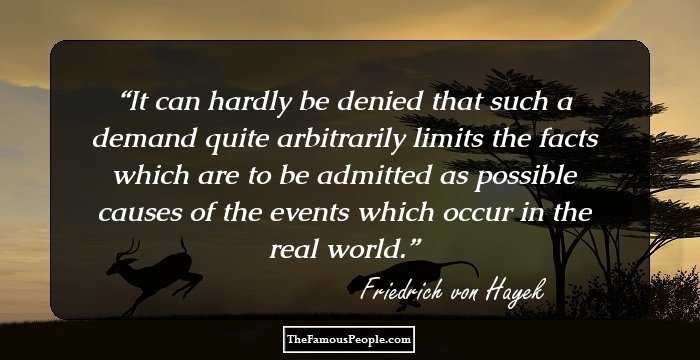 Later Years
In 1962, Hayek left University of Chicago to join Albert Ludwig University of Freiburg, located at Freiburg im Breisgau, Germany, as a Professor of Economic Policy, remaining there until his retirement in 1968. He later called his years at Freiburg, the most fruitful.
Continue Reading Below
At Freiburg, Hayek started working on ‘Legislation and Liberty: A New Statement of the Liberal Principles of Justice and Political Economy’, a work that would take years to complete. In it, he further developed the philosophical principles he had earlier discussed in ‘The Road to Serfdom’ or ‘The Constitution of Liberty’.
In 1968, he joined University of California, Los Angeles as a visiting professor for one year. Thereafter in 1969, he joined University of Salzburg, Austria, remaining there till 1977. All the while he continued working on ‘Legislation and Liberty’, publishing it in three volumes in 1973, 1976 and 1979 respectively.
In 1980, he started working on what would be his last work, ‘The Fatal Conceit: The Errors of Socialism’. In it, he refuted the theory of socialism. Unfortunately, he became ill before he could complete it and therefore the work was edited by William Warren Bartley.
Major Works
Friedrich von Hayek is best remembered for his 1944 book, ‘The Road to Serfdom’. In this book, he attacked socialism, arguing that, “Economic control is not merely control of a sector of human life which can be separated from the rest, it is the control of the means for all our ends.” Over two million copies of the book have been sold and even today, the book is cited by scholars and commentators.
Awards & Achievements
In 1974, Friedrich von Hayek was co-awarded the Nobel Memorial Prize in Economic Sciences for his “pioneering work in the theory of money and economic fluctuations and for their penetrating analysis of the interdependence of economic, social and institutional phenomena". Gunnar Myrdal was his co-recipient.
Personal Life & Legacy
In August 1926, Hayek married Helen Berta Maria von Fritsch, at that time a secretary at the civil service office where Hayek was working. They had two children; Christina Maria Felicitas, Lorenz Josef Heinrich. Later, he claimed that he was never happy with her.
Hayek was actually in love with his cousin Helene Bitterlich. When she got married to somebody else Hayek married Berta Maria on the rebound. Sometime around 1945-1946, he began an affair with Bitterlich, keeping it a secret until 1948.
Initially Helen Berta Maria refused to grant him the divorce. Nonetheless, it took place in July 1950, after he had almost arm twisted her and their children into accepting it. He married Helene Bitterlich just a few weeks after this. After his divorce, he rarely visited his children.
Friedrich von Hayek died on 23 March 1992, in Freiburg, Germany.
Although in the initial years, his theories on free market did not find many takers, from 1980s onwards, especially after the fall of the Soviet Block, his contributions started being reassessed and today there are considerable amount of secondary literature concerning his works.
Hayek Society at the London School of Economics and University of Oxford as well as Hayek Fund for Scholar at Institute of Human Studies (California, USA) have been named in his honor. He also has an investment portfolio, ‘The Hayek Fund’, named after him.
George Mason University has instituted an economics essay award named in his honor.
Each year, Ludwig von Mises Institute holds a lecture, named after Hayek, at its Austrian Scholars Conference. Here notable academics are invited to speak on topics relating to Hayek's contributions.