An isolated, aggressive and pessimistic person, Schopenhauer was one of the greatest philosophers of the 19th century. His cynicism, much of which was rooted in the manner he was raised, taught him an early lesson that individual will is nothing but a whim. He even believed that the world does not exist and was just a figment of one’s imagination. For him the world and the existence of human beings were absurd, rife with mundane activities, desires and conflicts which neither render anything, nor serve any purpose. He wished to rise above all these, to lead a life devoid of worldly desires and bereft of any relationships. He chose a lonely life for himself, trying to understand the humiliation of existence and how it could be mitigated. He immersed himself exploring Buddhism and Indology and was particularly charmed by the ‘Upanishads’ (philosophical texts) which he described as “the production of the highest human wisdom”. Calling the Sanskrit literature as "the greatest gift of our century", he studied it deeply and incorporated it in his masterpiece ‘The World as Will and Representation.’ Thus, the ‘Upanishads’ and other eastern philosophical texts gave him purpose and a higher level of discernment of life, so much so that, he once said “It has been the solace of my life, it will be the solace of my death!”. Ernst Jünger
Philosophers #21
Intellectuals & Academics #25
DID WE MISS SOMEONE?
CLICK HERE AND TELL US
WE'LL MAKE SURE
THEY'RE HERE A.S.A.P
Quick Facts

German People
German Men
University Of Göttingen
Male Philosophers
German Philosophers
Childhood & Early Life
Arthur Schopenhauer was born on 22 February 1788, in Danzig (Gdańsk), to Johanna Schopenhauer and Heinrich Floris Schopenhauer. Both his parents were descendants of wealthy German patrician families.
His father died in 1805; it is generally believed he committed suicide. His mother, a writer and an intellectual, started a literary salon in Weimar after her husband's death. Arthur had a strained relationship with his mother.
He was an intelligent young boy who enrolled at the University of Gottingen in 1809. There he studied metaphysics and psychology under Gottlob Ernst Schulze and was especially influenced by the ideas of Plato and Immanuel Kant. He also attended lectures by the prominent post-Kantian philosopher Johann Gottlieb Fichte and the theologian Friedrich Schleiermacher in Berlin in 1811-12. 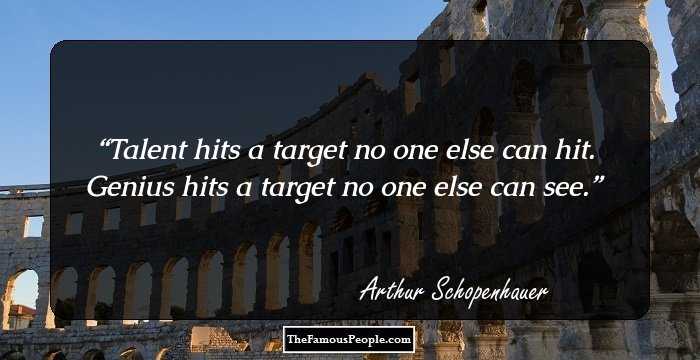 The Best Black Actresses Of All Time
Career
He began working on ‘The World as Will and Representation’ in 1814. It took him a few years to complete the work which was ultimately published in 1818. The first volume covered his ideas on epistemology, ontology, aesthetics and ethics. The second volume would be published much later.
Schopenhauer became a lecturer at the University of Berlin in 1820. However he was unable to find success in his academic career as only five students turned up for his lecture, forcing him to drop out of academia.
In 1831 he wrote a sarcastic treatise ‘The Art of Being Right: 38 Ways to Win an Argument’. In this work he gave 38 methods of beating an opponent in a debate. The introduction to the essay states that philosophers, especially since the time of Immanuel Kant, have not engaged with the darker art of the dialectic, of controversy.
He published the essay ‘On the Freedom of the Will’ in which he tried to answer the academic question "Is it possible to demonstrate human free will from self-consciousness?" which was posed by the Royal Norwegian Society of Sciences in 1839.
He published a second edition of ‘The World as Will and Representation’ in 1844. It had two volumes. The first was a virtual reprint of the original, and the second was a collection of essays expanding topics covered in the first. The important topics covered in the work were his reflections on death and his theory on sexuality.
In 1851, he wrote an essay ‘Of Women’ in which he described the women as less reasonable and lacking the capacity to make decisions. In the essay he also referred to women as the “weaker sex”. 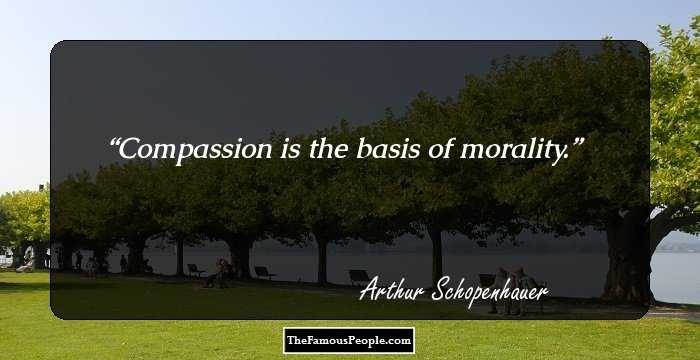 Major Works
His single monumental work ‘The World as Will and Representation’ remains his greatest piece of work. The book is a philosophical genius in every sense as the author tries to illustrate non-rationality and universality as the supreme force behind the existence of both animate beings and inanimate objects.
Personal Life & Legacy
Schopenhauer never married but had a relationship with Caroline Richter, an opera singer, beginning in 1821.
Continue Reading Below
He was not at good terms with his mother. He disliked the literary salon his mother had opened and was shocked by the fact that she had forgotten about his father who passed away some years ago.
At the outbreak of cholera, he left Berlin for Frankfurt in 1833 and lived there alone, except for his pet poodles which gave him company.
Though he enjoyed a robust health, but in 1860 his health began to deteriorate and he died of heart failure on 21 September 1860 while sitting at home on his couch with his cat.
This great philosopher's works and teachings inspired a number of philosophers - Richard Wagner, Friedrich Nietzsche, Jorge Luis Borges and to some extent Sigmund Freud.
He believed that the actions of all human beings lacked direction and that desire is the root of all evils. According to him, pain and suffering are directly proportional to desire as it creates frustration upon the failure of attaining a particular goal or object.
He was of the opinion that desire never ends which means after achieving something the desire for a new goal creeps in. This is a cycle which continues for an indefinite period.
Schopenhauer’s theory is being viewed and researched by many modern philosophers as an antecedent of the theory of evolution and the modern evolutionary psychology.
His views on women were mostly anti-feminist and for him “woman is by nature meant to obey”. In his essay ‘Of women’ he wrote “She pays the debt of life not by what she does, but by what she suffers; by the pains of child-bearing and care for the child, and by submission to her husband, to whom she should be a patient and cheering companion.”
He also believed in the monistic philosophy and stated that there is fundamentally no difference between human beings and animals. Their origin and the origin of human beings, is from the single ‘Will’ and that a person who expresses sympathy towards animals is a good human being. 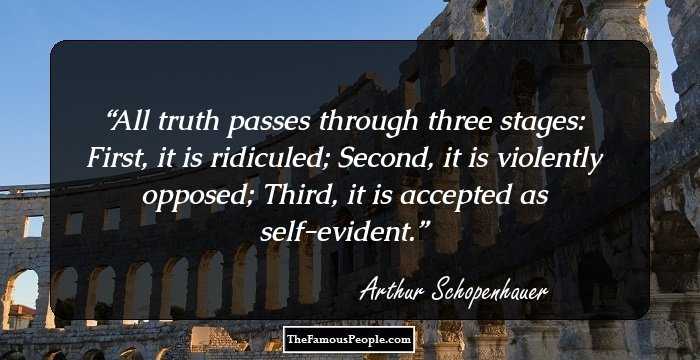 Trivia
This great German philosopher who influenced a number of modern day philosophers chose to live alone, with his pet poodles to keep him company and died with his cat on his lap, while sitting on his couch.
You May Like

Quotes By Arthur Schopenhauer | Quote Of The Day | Top 100 Quotes

See the events in life of Arthur Schopenhauer in Chronological Order