Alfred Russel Wallace was a British scientist, anthropologist, biologist and explorer, best known for discovering the concept of evolution by natural selection. He was also a pioneer in the field of biogeography, contributing significantly to the study of geographical distribution of various animal species. Despite being so richly knowledgeable about nature and its phenomena, his life was a constant financial struggle. It was quite late in his life, when one of his closest friends, Charles Darwin, helped him acquire a regular source of income in the form of a small government pension, in return for his lifetime of scientific contributions. His prominent works involved the groundbreaking discovery of the evolutionary theory through natural selection and extensive fieldwork for collecting specimens in the Amazon River basin and then in the Malay Archipelago. Apart from his exceptional scientific works, he also got involved in social activism, raising his voice against the unjust social and economic system in 19th-century Britain. He was also a prolific author and one of the first scientists to raise concerns over the environmental impact of human activity. But, he is most remembered as a natural explorer and a curious scientist who independently revolutionized the concept of evolution through his keen interest in natural history. Robert Falcon S...
Biologists #7
Geographers #15
Anthropologists #17
DID WE MISS SOMEONE?
CLICK HERE AND TELL US
WE'LL MAKE SURE
THEY'RE HERE A.S.A.P
Quick Facts

British Celebrities
Geographers
Anthropologists
British Men
Male Biologists
Childhood & Early Life
He was born on January 8, 1823 in Kensington Cottage near Usk, Monmouthshire, England, to Thomas Vere Wallace and Mary Ann Wallace. He was one among the nine children of his parents.
In 1828, his family moved to Hertford where he received his early education from the Hertford Grammar School for the next six years.
His father inherited some income-generating property but he wasted most of it on a series of poor business decisions. Alfred was ultimately forced to leave school in 1836 as a result of deteriorating financial condition of his family.
He was sent to London to work with his older brother, John, an apprentice builder. While in London, he attended lectures and read books at the London Mechanics Institute, working on his self-education. 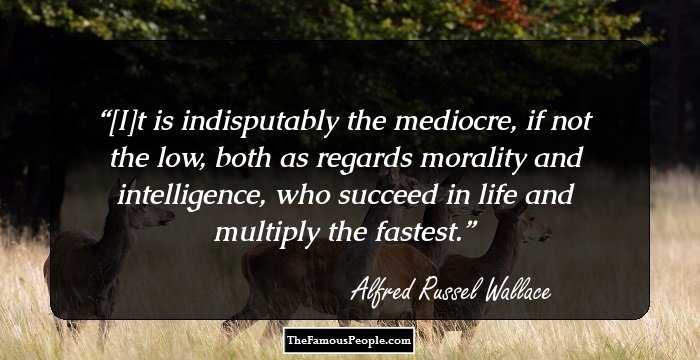 The Best Black Actresses Of All Time
Career
In 1837, he went to work as an apprentice for his eldest brother, William. Their business eventually settled at Neath in Glamorgan in Wales in 1839–40 but after few years, due to harsh economic conditions, the business weakened and Alfred left the job at his brother’s firm.
Later, he found a teaching work at the Collegiate School in Leicester. While working as a teacher, he met an entomologist, Henry Walter Bates, who persuaded him to collect insects for research purposes. In 1845, William died and he resigned from his teaching job to assume control of his brother's firm along with his brother, John.
The business eventually failed and he found work at a firm as a civil engineer. His work mostly involved spending a lot of time in the countryside which permitted him to collect insects, his newly formed passion.
Along with his brother John, he started his own architecture firm and worked on several projects including the Neath Mechanics' Institute, founded in 1843. He was persuaded by the founder of institute to deliver lectures on science and engineering in the institute.
In 1848, he and Bates started their journey to Brazil in search of insects and other animal specimens in the Amazon rainforest. Their plan was to bring them to United Kingdom and sell them to collectors.
After four years of successful expedition and with a wide collection of specimens, on his way back to UK in 1852, the ship’s cargo caught fire and most of the gatherings and precious items were lost. The crew was rescued but he only managed to save a part of his diary and a few sketches from his voyage.
Upon his return, he spent several months living on the insurance money for his lost belongings. He also wrote some books and papers from his experiences of the expedition and made connections with other naturalists such as Charles Darwin.
From 1854 to 1862, he started another voyage through the Malay Archipelago or East Indies to study natural history and collect other specimens.
While on his exploration, he developed his famous insight on theory of evolution through natural selection. In 1858, an article on his insights was published along with a description of the famous Darwin’s theory.
Continue Reading Below
Upon his return to the UK, he became interested in social activism along with his scientific pursuits, and entered the debates over trade policy and land reform. He also wrote articles on other social and political topics such as women's suffrage, and the dangers and wastefulness of militarism.
In his later years, he met many other prominent American naturalists and viewed their collections. He carried out his further scientific work on Darwinism along with giving lectures on biogeography, spiritualism, and socio-economic reforms.
Major Works
His most prominent work was conceiving the ‘theory of evolution through natural selection’. It is one of the most celebrated works in the history of evolution.
He also performed pioneering works in biogeography and became a leading expert on the geographical distribution of animal species.
‘The Malay Archipelago’, an account of his studies and adventures, published in 1869, became one of the most popular books of scientific exploration of the 19th century.
One of his notable works was the ‘Wallace Effect’, a hypothesis on how natural selection could contribute to speciation by encouraging the development of barriers against hybridization.
Awards & Achievements
In 1868, he was honored with the Royal Medal by the Royal Society for his efforts in “practical and theoretical zoology".
In 1892, he received the Royal Geographical Society's Founder's Medal as well as the Linnean Society's Gold Medal.
He was awarded the Copley Medal in 1908. The same year he also became the recipient of the ‘Order of Merit’.
He was also conferred honorary doctorates from the Universities of Dublin (1882) and Oxford (1889).
Personal Life & Legacy
In 1866, he married Annie Mitten, daughter of William Mitten, an expert on mosses. They were blessed with three children: Herbert, Violet and William.
In subsequent years, he made some bad investments in railways and mines which resulted in a financial crisis for him and his family. It was only after the efforts of his friends, especially Darwin, that he was awarded a £200 annual pension in 1881, which stabilized his financial condition.
He died on November 7, 1913 at his home in Broadstone, Dorset, England, at the age of 90. He was buried in the small cemetery at Broadstone, Dorset.
Recommended Lists:
Explorers #49
Scientists #75
Miscellaneous #758
Intellectuals & Academics #462
You May Like