Advanced Search
Thomas Henry Huxley was a renowned English biologist who rose to prominence in the 19th century. Born in a poor family, his father could not afford to send him to school. So, he began to educate himself. He excelled in science as he was blessed with an open mind and free thinking. He was recognized for his contribution and honored by the Royal Society when he was only twenty six years old. He was unwilling to believe the Biblical theory of creation and instead he supported Darwin’s theory of Evolution. His contribution to the study of marine biology, geology and the study of invertebrates, based on research and reason, is invaluable. He made biology a discipline in the universities, elevated the status of the School of mines and zoology and brought the issue of adult education to the fore. Though he was accused of being materialistic for his agnostic views, he supported the reading of the Bible in school for he believed that the Bible's significant moral teachings and superb use of language were relevant to English life. For his services to scientific learning, he was conferred honorary degrees and titles in many European countries. He will always be remembered as one of the pioneers of scientific thought. British People
Anthropologists
British Men
University College London
Male Scientists
Childhood & Early Life
Thomas Henry Huxley was born in Ealing, Middlesex to George, a mathematics teacher at Ealing School and Rachel Withers. He was the second youngest of the eight children.
At the age of ten, he had to leave school because his family was put into financial difficulties following the closure of Ealing School. He began to educate himself and became an expert on invertebrates.
In 1838, he was taken for short periods as apprentice to several medical practitioners. While working as an apprentice to Thomas Chandler, a pioneer in mesmerism, and John Salt, he continued his reading.
In 1841, he joined the Sydenham College and won a silver medal in the Apothecaries' yearly competition. He then entered Charing Cross Hospital to pursue his education, where he got a scholarship.
He appeared in his first M.B examination at the University of London and earned gold medals in anatomy and physiology. However, he failed to appear for his second exams and therefore did not get a degree. 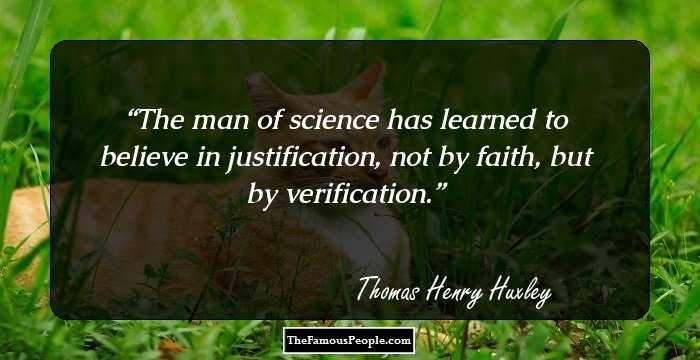 Quotes: Believe
Continue Reading Below
Career
He applied for an appointment in the Royal Navy in 1845. His apprenticeships and exam results formed a sufficient basis for his application and he became Assistant Surgeon on HMS Rattlesnake.
The Rattlesnake started from England in 1846 on a voyage to New Guinea and Australia. He sent his discoveries, based on his study of marine invertebrates, to Edward Forbes, his mentor, to get them published.
His paper, ‘On the Anatomy and the Affinities of the Family of Medusae’, published in 1849, united the Hydroid and Sertularian polyps with the Medusae to form a class which he named ‘Hydrozoa’.
After he returned to England in 1850, in recognition of his work, he was selected a ‘Fellow of the Royal Society’ and met lifelong friends Joseph Dalton Hooker and John Tyndall.
The Navy retained him so that he could study the specimens collected during his voyage. In 1851, he showed that Appendicularia and Ascidians are both tunicates and related to the vertebrates in the phylum Chordata.
In 1854, while serving as the professor of natural history at the Royal School of Mines, his work included vertebrate paleontology and many projects to advance the place of science in British life.
He gave six lectures at the Royal School of Mines in 1855, expressing hope that the working classes understand that science and her ways are great facts for them and that they must be obeyed.
In the Oxford Evolution debate, 1860, he argued in favor of the theory of evolution while Bishop Samuel Wilberforce denounced the theory. The debate was considered a victory for Darwinian ideas and scientific thinking.
In 1864, he launched a dining club, the ‘X Club’ consisting of his closest friends, to work towards the cause of science. Guests such as Charles Darwin visited the club sometimes.
Continue Reading Below
His lecture ‘On a Piece of Chalk’ in 1868 to the working class of Norwich served as a basis for other scientists who explained the process of life development on earth.
Between 1855 and 1890, he was a Professor at the Royal College of Surgeons, President of the British Association for the Advancement of Science, of the Royal Society and of the Marine Biological Association. 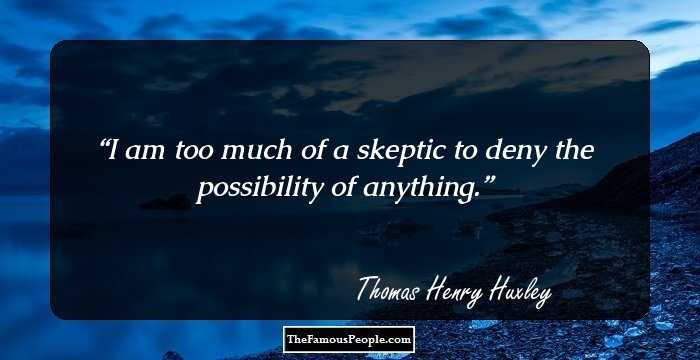 Quotes: I
Major Works
In his famous essay, ‘On the Physical Basis of Life’, 1869, Huxley insisted that life and even thought were at bottom of molecular phenomena. He invented the word ‘agnostic’ to express his theological position.
In 1893, his ‘Collected Essays’ was published in nine volumes including, ‘Method and Results’, ‘Darwiniana’, ‘Science and Education’, ‘Science and Hebrew Tradition and Christian Tradition’, and ‘Evolution and Ethics and Other Essays’.
Awards & Achievements
A Fellow of the Royal Society, he was awarded the Royal Medal in 1852, the youngest to receive such a recognition.
Between 1876 and 1894, he was awarded the Copley Medal, the Darwin Medal, the Geological Society’s Wollaston Medal, and the Linnean Medal for the study and dissemination of taxonomy and natural history.
He was conferred with doctorates and awards for his public services and appointed the Privy Councilor in 1892, while the King of Sweden made him a Knight of the Order of the Polar Star. 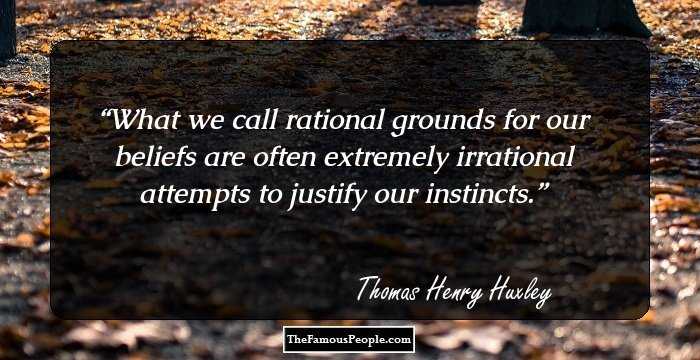 Personal Life & Legacy
In 1855, Thomas Huxley married Henrietta Anne Heathorn whom he had met in Sydney. The couple had five daughters and three sons. His oldest son, Noel, died at the age of four.
Biographers have noted that many members of his family, including the biologist’s father, brothers and a daughter suffered from mental illnesses. He himself suffered from depression while on HMS Rattlesnake.
He died of a heart attack in 1895.
Trivia
This famous British zoologist’s championship of Darwin's theory of evolution was remarkable and he referred to himself as ‘Darwin’s Bulldog’.
The author of the novel ‘Brave New World’ was the grandson of this renowned, agnostic and controversial zoologist.
Recommended Lists:
Intellectuals & Academics #351