Famously dubbed as the woman who redefined man, Jane Goodall is an English primatologist, anthropologist, and animal rights activist. She is best known for her 60-year study of behavior of chimpanzees in Tanzania. She was fascinated by animal behavior from her early years and dreamt of traveling to Africa to observe them in their natural habitat. Her passion for animals led her to the ‘Gombe Stream National Park’ in Tanzania. Chimpanzees were considered the second-most intelligent primate by her mentor and anthropologist Louis Leakey. Thus, she began her research by observing them on a daily basis. Her observation of chimpanzees challenged many long-term beliefs, such as chimpanzees are vegetarians. A previous belief that “man is the only toolmaker in all of the species that inhabit the earth” was discarded by her studies. This was considered a significant milestone in the course of scientific history of evolution. She also received many awards and accolades for her activism on creating a better society for animals. She wrote several books to encourage people to treat animals with kindness and love. She spends about 300 days a year traveling, lecturing, and raising funds for her institute in order to preserve wildlife. She was named a 'UN Messenger of Peace' in April 2002. Thomas Henry Hu...
3rd April In History
DID WE MISS SOMEONE?
CLICK HERE AND TELL US
WE'LL MAKE SURE
THEY'RE HERE A.S.A.P
Quick Facts

Jane Goodall was born Valerie Jane Morris-Goodall on April 3, 1934, in London, England, UK, to Mortimer Herbert Morris-Goodall, a businessman, and Margaret Myfanwe Joseph, a novelist. She had a younger sister named Judy.

As a child, she received a toy resembling lifelike chimpanzee from her father. This kindled her curiosity and love for animals.
During her early years, she observed nature and wildlife which increased her fondness for animals. She dreamt of traveling to Africa to watch and explore animals in their natural habitat.

Because of her love for wildlife, she left school at the age of eighteen in order to pursue her dream. 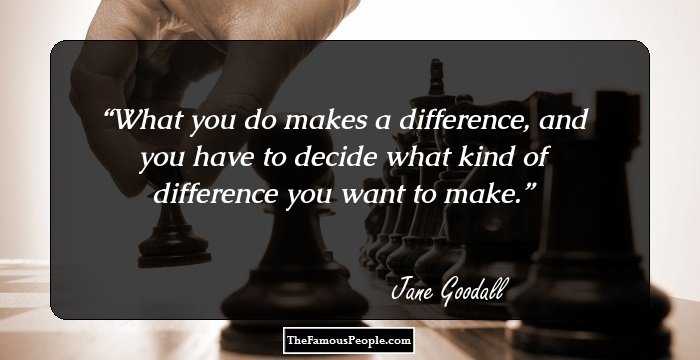 Quotes: You
Continue Reading Below
Career
She worked as a secretary in ‘Oxford University’ and also worked at a London-based documentary film company to finance her trip.

Through her friends, she met the famous anthropologist and paleontologist Louis Leakey in Kenya. Leakey believed that observing chimpanzees, the second-most intelligent primate, would provide new information on evolution. He provided her with an opportunity to study them at ‘Gombe Stream National Park’ and she grabbed it with both hands.

Though she had no scientific knowledge or a degree, Jane observed chimpanzees and inferred some major similarities between humans and chimpanzees.
In 1962, Leakey enrolled her at ‘Cambridge University’ and she obtained a PhD in ethology.
In 1977, she established ‘Jane Goodall Institute’ to protect wildlife, especially chimpanzees all over the world.
She has been an animal rights activist for many years now. She has participated in various movements around the world to support the cause of treating animals with utmost respect and care. She actively raises funds for her institute and travels a lot in order to educate people about preserving wildlife. 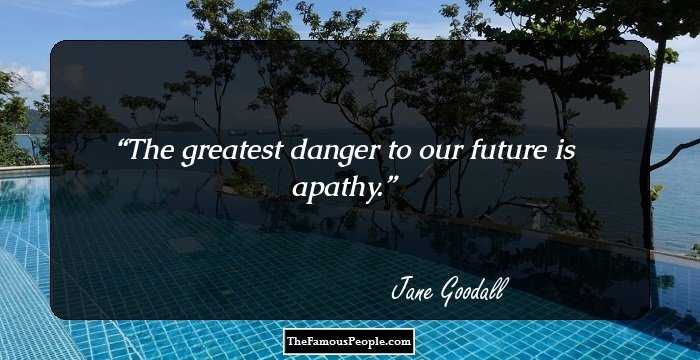 Quotes: Future
Major works
Jane is best known for her research in ‘Gombe Stream National Park.’ While going about her research, she adopted an unusual method of naming the chimpanzees she observed instead of numbering them, which was the common practice at the time. She named them as she believed that chimpanzees had unique and individual personalities like humans.

Before her observation, it was believed that only humans possessed the skill of making tools and that their ability to make tools distinguished them from other primates. But after her studies on chimpanzees, this belief was abandoned. While observing a chimpanzee, she realized that the animal was effectively “fishing” for termites as it repeatedly placed stalks of grass into termite holes. When it took out the stalk of grass from the hole, it was able to feed on termites clinging to the grass. Her mentor Leaky wrote in an article to the scientific community, “We must now redefine man, redefine tool, or accept chimpanzees as human!”

In order to protect chimpanzees, she founded ‘Jane Goodall Institute’ in 1977, which now has sub-groups all around the world. Its global youth program ‘Roots & Shoots,’ which focuses on saving them and their habitat, began in 1991.

She is the former president of ‘Advocates for Animals’ which raised its voice against the use of animals for medical and laboratory research purposes.
She is an activist who fights for the rights of animals. She also raises awareness about wildlife to help preserve them for future generations.
Awards & Achievements
In 1995, she was honored with ‘National Geographic Society Hubbard Medal’ for ‘Distinction in Exploration, Discovery and Research.’ She was also made Commander of the Order of the British Empire (OBE), presented by Her Majesty Queen Elizabeth II.
In 1999, she was honored with the ‘International Peace Award.’
In 2003, she received ‘Benjamin Franklin Medal in Life Science.’ She was also made Dame Commander of the Order of the British Empire, presented by His Royal Highness Prince Charles.
In 2006, she was honored with the 60th Anniversary Medal of UNESCO and French Legion of Honor.
She has also received Doctorate degrees from several prestigious universities around the globe.
In 2014, she received the ‘Presidential Medal’ from the ‘British Academy.’ 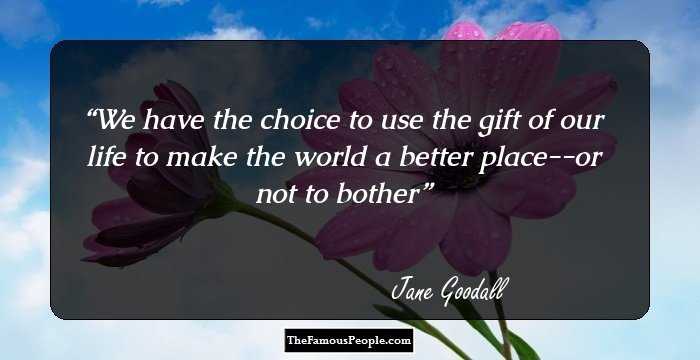 In 1964, Jane married a Dutch wildlife photographer named Baron Hugo Van Lawick. He was sent to ‘Gombe’ by ‘National Geographic Society’ to shoot the project she was working on. They had a son named Hugo Eric Louis. Jane and Hugo Van Lawick got divorced in 1974.

In 1975, she got married to Derek Bryceson who died of cancer in 1980.
When asked about God, she said that she believes in a great spiritual power that is bigger and stronger than anybody in the world. She continues to fight for the conservation of wildlife by traveling 300 days a year to various countries and continents.
Trivia
This famous conservationist became the eighth person to be allowed to work for a PhD without having a graduate degree.

Quotes By Jane Goodall | Quote Of The Day | Top 100 Quotes

See the events in life of Jane Goodall in Chronological Order