Robert Falcon Scott was a British Royal Navy officer and explorer who died on his attempt to be the first to reach the South Pole. His first expedition to the Antarctic region was the Discovery Expedition during which Scott discovered the Polar Plateau and made some important meteorological, geographical and zoological findings. His party had faced great many difficulties during the expedition though eventually Scott returned to England to a hero’s welcome. Scott was an officer in the British Royal Navy prior to his appointment as the leader of the Discovery Expedition which established him as a heroic explorer. Born into a family with a rich naval tradition, it comes as no surprise that he chose to join the navy himself as a young man. Eventually he became a successful naval officer, rising through the ranks over time. It was during the course of his career that he attracted the notice of the Royal Geographical Society which asked him to command the Discovery expedition to Antarctica. He was hailed as a hero following his return from the expedition and he soon began harboring greater ambitions for his next expedition. His next expedition, the Terra Nova Expedition, was an attempt to be the first to reach the South Pole. However, the expedition ended in tragedy as Scott along with several of his party members died on the ill-fated expedition
Continue Reading Below 4116
DID WE MISS SOMEONE?
CLICK HERE AND TELL US
WE'LL MAKE SURE
THEY'RE HERE A.S.A.P
Quick Facts

British Celebrities
British Explorers
Gemini Men
Childhood & Early Life
Robert Falcon Scott was born on 6 June 1868 to John Edward and his wife Hannah. He was the third of their six children. His father worked as a brewer and magistrate, and the family was a wealthy one. Several of Robert’s uncles served in the army or navy and he too would one day follow in their footsteps.
After studying for four years at a local day school, he was sent to Stubbington House School, a cramming establishment preparing candidates for the entrance examinations to the naval training ship HMS Britannia at Dartmouth. 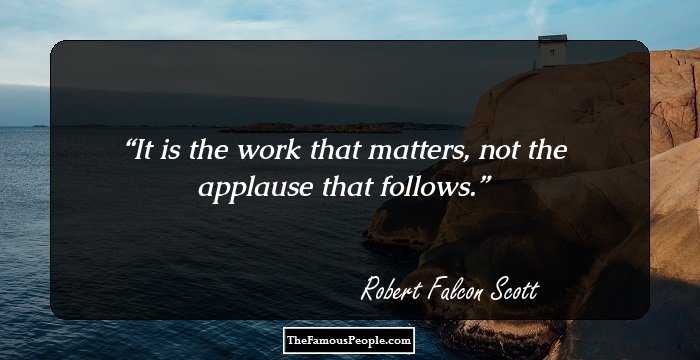 The Best Black Actresses Of All Time
Career
He passed his examinations in 1881 and began his naval career as a cadet, aged 13. A couple of years later, he passed out of Britannia as a midshipman.
In 1883, he joined the HMS Boadicea in South Africa as a midshipman. Over the next few years he served on several other ships in the same position. He became acquainted with Clements Markham, then Secretary of the Royal Geographical Society, while serving on HMS Rover in West Indies. Markham, who was much impressed by the Scott's intelligence and enthusiasm, would play a significant role in Scott’s later career.
Scott passed the examinations for sub-lieutenant in 1888 and was promoted to lieutenant in 1889. By 1891, he had become a full lieutenant.
During the mid-1890s, several financial problems befell his family. He also lost his father and a brother at this time, and this further increased the woes of his family which now consisted of his mother and two unmarried sisters. Even though Scott was a successful navy officer, the opportunities for advancement in the Royal Navy were limited.
In June 1899, he once again met Clements Markham, who was now knighted and was President of the Royal Geographical Society (RGS). Markham told Scott about an upcoming Antarctic expedition with the Discovery, under the auspices of the RGS. Scott volunteered to lead the expedition believing that it would give him a chance to distinguish himself.
Scott was given overall command of the expedition, and he along with his crew set sail for the Antarctic on 6 August 1901 abroad the RRS Discovery. Ernest Henry Shackleton served as third officer on this expedition.
The aim of the expedition was to carry out scientific research and geographical exploration in the hitherto largely unexplored continent. The expedition conducted scientific research in varied fields such as biology, geology, meteorology, and magnetism. They also discovered the existence of the only snow-free Antarctic valleys which contain Antarctica's longest river.
On its return home in 1904, the crew received considerable appreciation and respect, and the Discovery Expedition was considered a landmark in British Antarctic exploration history.
Scott was elevated to a popular hero and promoted to the rank of a captain. After being occupied with public receptions, lectures and the writing of the expedition record for over a year, he resumed his full-time naval career in January 1906, as an Assistant Director of Naval Intelligence at the Admiralty. In August the same year, he became the flag-captain to Rear-Admiral Sir George Egerton on HMS Victorious.
Continue Reading Below
Scott soon began planning for a second, more ambitious expedition to the Antarctic. In 1910, he took command of the British Antarctic Expedition, to be known as the Terra Nova Expedition from its ship, Terra Nova. Scott stated that its main objective was "to reach the South Pole, and to secure for the British Empire the honour of this achievement”.
He wanted the British team to be the first to reach the geographic South Pole. Along with four companions, he managed to successfully reach the pole on 17 January 1912 but found out that a Norwegian team led by Roald Amundsen had preceded them by 34 days. 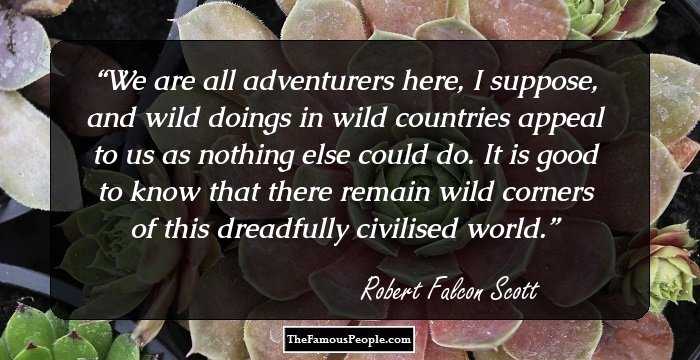 Quotes: I
Major Expedition
Robert Falcon Scott was the commander of the Discovery Expedition (1901-04), which was the first official British exploration of the Antarctic regions since James Clark Ross's voyage sixty years earlier. The expedition was considered a success and Scott became one of the leading figures in the Heroic Age of Antarctic Exploration.
Awards & Achievements
King Edward VII made Scott a Commander of the Royal Victorian Order (CVO) in 1904 after his successful return from the Discovery Expedition.
He was also honored with the Vega Medal (1905) and Cullum Geographical Medal (1906). 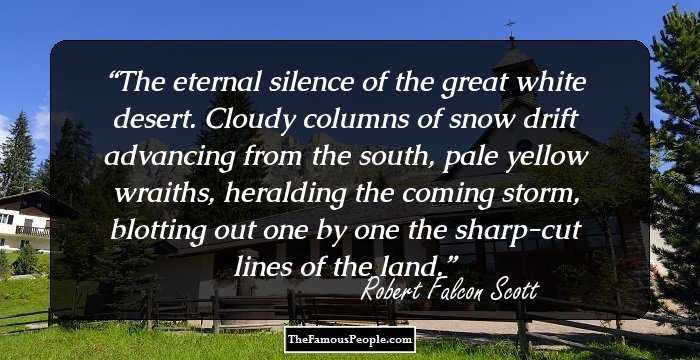 Personal Life & Legacy
Robert Falcon Scott met Kathleen Bruce, a sculptress and socialite, in 1907 and married her a year later. The couple was blessed with one son, Peter Markham Scott, who later on became the founder of the World Wide Fund for Nature (WWF).
The Terra Nova Expedition which he led reached the South Pole on 17 January 1912. Scott and his party died from a combination of exhaustion, starvation and extreme cold on their return journey, hardly at a distance of 150 miles from their base camp and 11 miles from the next depot. Scott is presumed to have died on 29 March 1912. The bodies of Scott and his companions were discovered months later by a search party.
You May Like