Adam Weishaupt was a German philosopher and professor who founded the quintessential 'Order of the Illuminati,' which is considered the world’s most influential secret society. It is believed it still exists. Orphaned at a young age, Adam was raised by his godfather, Johann Adam Freiherr von Ickstatt, an educator. Adam was a voracious reader. His habit of reading later helped him shape the founding ideologies of the 'Illuminati.' Adam, who led a peaceful life as an ecclesiastical law professor at the 'University of Ingolstadt,' was eventually disturbed by the governing laws back then. His anguish became the inspiration behind the formation of the 'Illuminati,' which strongly opposed religious influences on society and allowed educated Europeans and Americans to question the conservative theories about science, religion, and, politics. The secret society was initially meant only for Adam’s students, but it eventually recruited several high-profile personalities from Bavaria. As the 'Illuminati' strengthened its roots, it underwent several internal conflicts and was subjected to a lot of external opposition. A scandal in 1784 accused Adam of being at the heart of a conspiracy and led him to flee Bavaria, thereby starting the end of the 'Illuminati.’ He lived under the protection of a local duke, and that phase saw many of Adam's literary works being published. In most of his works, Adam had defended himself and justified his ideologies. To date the 'Illuminati' remains a mystery, as to some, it is the greatest-ever conspiracy theory in the world, while others consider it a medium to begin a religion-free world. Adam’s conspiracy-fueling theories have inspired many bestselling novels and blockbuster films. Max Stirner
DID WE MISS SOMEONE?
CLICK HERE AND TELL US
WE'LL MAKE SURE
THEY'RE HERE A.S.A.P
Quick Facts

German People
German Men
German Educators
Male Philosophers
German Philosophers
Childhood & Early Life
Adam was born Johann Adam Weishaupt, on February 6, 1748, in Ingolstadt, located in the Electorate of Bavaria (part of modern-day Germany). He was just 5 when he lost his father, Johann Georg Weishaupt, a law professor at the 'University of Ingolstadt.' Adam belonged to a Jewish-converted-Christian line of descendants.
Adam was raised by his godfather, Johann Adam Freiherr von Ickstatt, a German educator and the director of the 'University of Ingolstadt,' who enrolled him at a Jesuit school when he was 7. Adam was highly influenced by Johann’s rationalism, the philosophy of Christian Wolff, and the Enlightenment.
Adam later graduated with a doctorate of law from the 'University of Ingolstadt' in 1768. He became a law professor in 1772. He became a canon law professor after the suppression of the 'Society of Jesus' by Pope Clement XIV in 1773. Back then, the position was exclusive only to Jesuits.
In 1775, Adam was introduced to the empirical philosophy of German philosopher and 'University of Göttingen' professor Johann Georg Heinrich Feder, along with whom he later opposed the Kantian idealism (propounded by Immanuel Kant).
Adam completed his studies and became a canon law professor at the 'University of Ingolstadt.' He was at peace with his conventional career until he began advocating his ideas in 1784, which were heavily opposed by the Bavarian state.
Adam grew up with a restless mind but was an avid reader. He read all the French Enlightenment philosophers of the time. However, he was primarily impressed by Johann Georg Heinrich Feder’s philosophies on empiricism. Adam was satisfied to know that there were others who opposed the hereditary monarchy and the Roman Catholic church that, according to him, suppressed the freedom of thought. Adam favored science and rational thinking over feelings and faith.
Adam got involved with several 'Freemasons' and eventually realized that Bavaria lacked a social club or organization that strived toward developing the state beyond just a feudal backwater. The existing self-serving German secret societies disappointed him, and he was convinced that the existing religious ideologies were no longer effective in governing modern societies. Hence, Adam decided to form a variation to “illumination,” a set of radical ideas. 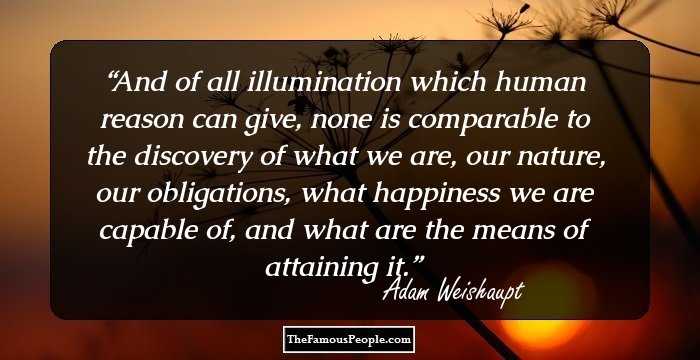 Quotes: Nature, Happiness
Continue Reading Below
The Rise & Fall of the Illuminati
Adam founded the 'Illuminati' in the evening of May 1, 1776, in a forest near the city of Ingolstadt. The Enlightenment-era secret society was created to oppose superstition, obscurantism, religious influence over public life, and abuses of the irrational state power.
The order’s membership was divided into three levels: the novices, the minervals, and the illuminated minervals. In 1777, Adam was introduced to the ‘Masonic lodge’ 'Theodor zum guten Rath,' in Munich, where his idea of "illumination,” or “enlightening the understanding by the sun of reason, which will dispel the clouds of superstition and of prejudice," was rejected by many. Therefore, he used ‘Freemasonry’ to create a quasi-Masonic society.
Adam recruited German writer Adolph Freiherr Knigge from Lower Saxony. Together, they presented a simple Masonry framework of ideologies, which they used to expand the secret organization.
Adam recruited many of his current and former Bavaria students, who in turn recommended more new members. Subsequently, his secret order flourished, and by 1782, it had around 600 members, including influential Bavarians such as Johann Wolfgang von Goethe, Baron Adolph von Knigge, and banker Mayer Amschel Rothschild (who financed the order). Toward the end of 1784, the 'Illuminati' members swelled in numbers, from 2,000 to 3,000.
Each 'Illuminati' member had a symbolic secret pseudonym inspired by classical antiquity. Adam was ''Spartacus,'' while Knigge was ''Philo,'' the Alexandrian philosopher.
Unfortunately, Adam’s radical rationalism faced heavy opposition. With the growth of the order, he and Knigge became so obsessed with their ideologies that they diverted from their prime goals of enlightenment. The two eventually fell out, going through numerous conflicts over recruitment and procedures. Baron later left the order and took several managers along with him.
Moreover, Adam earned the wrath of several younger members whom he would often bully. The order's decline approached more rapidly when Adam was found to consider the abortion of his illegitimate child.
The order suffered a big blow when it was accused of planning to support Austria, which was planning to annex Bavaria, something that Adam thought would empower the state with more enlightened rules.
The 'Order of the Golden and Rosy Cross,' a group based on alchemy, spirituality, and mysticism, which was well-connected to Bavarian authorities, started a campaign against the 'Illuminati' and persuaded the king of Bavaria to ban the order. The 'Illuminati' was finally outlawed in 1785.
Continue Reading Below
The Bavarian police raided all the 'Illuminati' meeting places and seized all its related documents. In 1787, the state published an anthology of 'Illuminati' papers that professed ideologies of suicide and atheism, the plot to form another order for women, and instructions to create invisible ink and performing abortions.
The original 'Illuminati Order' was permanently dismantled in early 1788. Some theories proposed just 2 years after the order collapsed suggested that the protests by the 'Illuminati' had led to the French Revolution. The theory was, however, later rejected by many philosophers.
Legacy & Major Works
Adam lost his 'University of Ingolstadt' job. He then fled Bavaria and lived the rest of his life in Gotha, Saxony. He became a philosophy professor at the 'University of Göttingen.'
In Gotha, Adam was assisted by Duke Ernest II of Saxe-Gotha-Altenburg (1745–1804). Adam wrote a series of works based on the 'Illuminati' ideologies. Some of them are 'A Complete History of the Persecutions of the Illuminati in Bavaria' (1785), 'An Apology for the Illuminati' (1786), 'A Picture of Illuminism' (1786), and 'An Improved System of Illuminism' (1787).
To defend himself, Adam wrote 'Kurze Rechtfertigung meiner Absichten' ('A Brief Justification of my Intentions') in 1787. It was later translated by Dr. Tony Page. The book spoke about Adam’s wish to educate the 'Illuminati' followers in ''the highest levels of humanity and morality.’’ His teachings were based on the supremacy of ''Reason,'' in association with the spirit of the ''Golden Rule of not doing to others what one would not wish done to oneself.’’
Dr. Tony further justified Adam’s writing, saying that his utopian project was “naively optimistic.’’ He considered Adam’s opposition as one of the most disgraceful and tragic ironies in history. He also regarded Adam someone who tried to instill ideas of virtue, philanthropy, social justice, and morality but unfortunately became one of the most-hated figures in history due to the ''conspiracy thinking'' of the 21st century.
American statesman, diplomat, and lawyer Thomas Jefferson considered Adam an "enthusiastic Philanthropist" and supported his idea to "reinstate natural religion’’ by ''diffusing the light of his morality, to teach us to govern ourselves.’’
Among those who were completely against Adam’s ideologies were Augustin Barruel and John Robison, who labeled him a ''human devil'' and believed his malicious missions had fueled destruction. The 'Illuminati' was even thought to be the driving force behind Kennedy’s assassination.
Adam’s ideas have influenced several popular fictional works, such as Dan Brown’s 'Angels & Demons' and Umberto Eco’s 'Foucault’s Pendulum.' Damian Chapa directed and acted in the film 'Adam Weishaupt: The Illuminati.'
Family Life & Death
Adam married Anna Maria Sausenhofer (1760–1846) of Eichstätt in 1783. They had two daughters, Nanette Weishaupt (1790–1853) and Charlotte Mariane Weishaupt (1792–1867), and four sons, Wilhelm Damianus Weishaupt (1784–1802), Karl Romanus von Weishaupt (1787–1853), Franz Eduard von Weishaupt (1786–1864), and Alfred (1795–1872).
Adam died on November 18, 1830, in Gotha, Germany. The cause of his death is unknown. He was buried next to his son Wilhelm.
Recommended Lists:
Intellectuals & Academics #316

See the events in life of Adam Weishaupt in Chronological Order