Hannah Arendt was a prominent 20th century American political philosopher and theorists. Writer of some of the most popular political works, such as ‘Origin of Totalitarianism’, ‘The Human Condition’, ‘On Revolution’, ‘The Life of Mind’ and so on, Arendt’s work interestingly cannot be defined to a particular ‘said’ political philosophy. In fact, it wouldn’t be wrong to say that Arendt never wrote anything that represented a systematic political philosophy through which she explained a single argument. Most of her topics were wide and diverse ranging from issues of totalitarianism to revolution, nature of freedom to history of political thought, direct democracy to authority and so on. For most of her work, she drew her inspiration from the works of Heidegger, Aristotle, Augustine, Kant, Nietzsche, Jaspers, and others. Having spent some crucial pre-World War II years in Germany, it was in 1940s that she shifted base to USA. It was in New York that Arendt’s career as a political theorist took off. She soon became part of an influential circle of writers and intellectuals. Not long after World War II, Arendt served as a visiting professor and lecturer of political philosophy in many prestigious universities and institutions across America. Arthur Schopenh...
Philosophers #37
Non-Fiction Writers #25
Writers #126
DID WE MISS SOMEONE?
CLICK HERE AND TELL US
WE'LL MAKE SURE
THEY'RE HERE A.S.A.P
Quick Facts

German Celebrities
Philosophers
Non-Fiction Writers
German Women
Heidelberg University
Childhood & Early Life
Hannah Arendt was born on October 14, 1906 in Linden, Germany, to Martha and Paul Arendt, in a secular family of German Jews. Arendt grew up in Königsberg and Berlin.
After graduating from high school in 1924, she enrolled at the University of Marburg. There, she studied philosophy with Martin Heidegger. Heidegger much like her was a German Jewish. They developed a romantic liaison.
After completing a year at Marburg, Hannah Arendt moved to Freiburg University where she spent a semester. In 1926, she moved to the University of Heidelberg. Working under existentialist philosopher-psychologist Karl Jaspers, she finally completed her dissertation, Der Liebesbegriff bei Augustin, and got it published in 1929.
Following her doctorate degree, she continued with her involvement in Jewish and Zionist politics. As a result of her research on antisemitism she was arrested and imprisoned by the Gestapo in 1933.
In 1937, she was ripped off her German citizenship. Fearing Nazi prosecution, she left for Czechoslovakia. She then travelled to Geneva, where she worked for some time at the League of Nations before leaving for Paris. At Paris, she befriended the Marxist literary critic and philosopher Walter Benjamin. 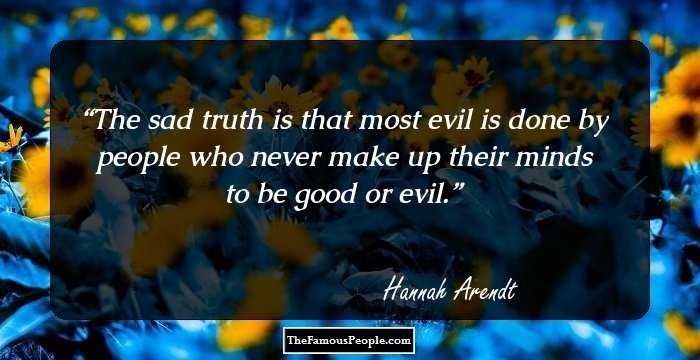 The Sexiest Men Of 2020, Ranked
Career
When German military took over parts of northern France, Jews residing in the place were deported to internment camps. Hannah Arendt too was interned in Camp Gurs as an ‘enemy alien’. In 1941, together with her husband Blucher, she fled to USA to escape detention.
During the early years of 1940s in New York, Arendt worked actively for the German-Jewish community. She worked as a columnist for the German language newspaper Aufbau. She also directed research for the Commission on European Jewish Cultural Reconstruction. Her work involved travelling to Europe.
In 1944, Hannah Arendt began working for her first major political book, ‘The Origins of Totalitarianism’. Highlighting that the roots of Stalinism and Nazism lay in antisemitism and imperialism, Arendt in her book defined that totalitarianism was a new form of government that employed terror to suppress mass population. She argued that totalitarianism did not just mean eradicating the Jews but subjugating a line of thought through dictatorship and tyranny.
During World War II, she began working for Youth Aliyah. It was a Zionist organization that safeguarded thousands of homeless children from Holocaust and settled them in the British Mandate of Palestine. During this time, Arendt befriended Karl Jaspers and American author Mary McCarthy.
In 1946, she began working on her next work ‘What is Existenz Philosophy’. It was published the same year. Around this time, she also took up the chair of an editor at Schoken Books in New York.
In 1950, Hannah Arendt became a naturalized citizen of the United States. In 1951, her book, ‘The Origins of Totalitarianism’ was published. Immediately after its publication, the book became a classic and was much admired by the critics. During this time, she rekindled her friendship with Heidegger.
During the early 1950s, Hannah Arendt began serving as a visiting scholar and took up professional positions at various American universities. She had visiting fellowship at the University of Notre Dame, University of California, Berkeley, Princeton University, and Northwestern University.
In 1958, her most important philosophical work, ‘The Human Condition’ was published. In it, she differentiates political and social concepts, labor and work, and various forms of actions and later defines its implication. It was in this work that Arendt’s theory of political action was extensively developed. Same year, her work, biography of Rahel Varnhagen was published.
In 1959, Hannah Arendt became the first female lecturer at Princeton University. From 1963 to 1967, she taught at the University of Chicago. There, she was also a member of the Committee of Social Thought.
Continue Reading Below
From 1967, she took up university professorship at the New School in Manhattan, a position which she served until her death. Meanwhile, she served as a fellow at the Yale University and was a member of the Center for Advanced Studies at Wesleyan University.
In 1961, Arendt attended the trial of Adolf Eichmann in Jerusalem as a reporter of New York magazine. Two years later, she came up with her work ‘Eichmann in Jerusalem’. The work caused major controversy in Jewish circles. Same time, she also came up with her work ‘On Revolution’ that gave an insight on American and French Revolutions.
During the decade of 1960s, Arendt came up with a number of essays, including ‘Between Past and Future’, ‘Men in Dark Times’ and ‘Crises of the Republic’.
At the time of her death, Hannah Arendt was working on her last major philosophical work, ‘The Life of the Mind’. While she had completed the first two volumes: ‘Thinking’ and ‘Willing’, she was working on the last volume ‘Judging’ before she breathed her last. While the first two volumes were published posthumously in 1978, the background and notes of her unfinished work for the third volume was published in 1982 as ‘Lectures on Kant's Political Philosophy’. 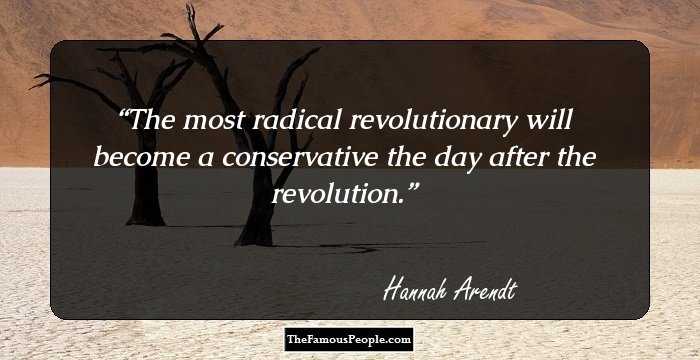 Quotes: Will
Major Works
The magnum opus of Hannah Arendt’s career came in 1951 with the publication of her work ‘Origin of Totalitarianism’. Set at the time of the rise of Nazi Germans and devastating state of Jews, Arendt in her work argued that the political nature of such an event was not based on any precedent form of government but that it resulted in a new form of government that used terror to subjugate mass population.
While ‘Origin of Totalitarianism’ made Arendt popular as a political thinker, it was her second work ‘The Human Condition’ that came to be known as her most influential work. In it, she differentiated political and social concepts, labor and work, and various forms of actions and later explored their implications.
Awards & Achievements
In 1962, Hannah Arendt was elected as a fellow of the American Academy of Arts and Sciences. Two years later, she became a member. 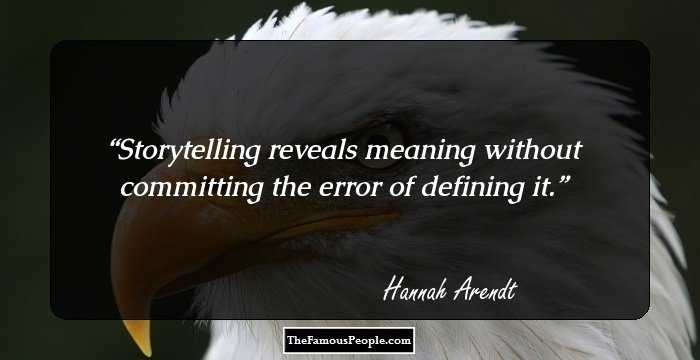 Personal Life & Legacy
In 1929, Hannah Arendt married Günther Stern, later known as Günther Anders. They divorced in 1937. Around this time, she met Heinrich Blucher, a German political refugee, poet and Marxist philosopher for the first time. The two later tied the nuptial knot in 1940. Blucher then was a founding member of the KPD who had been expelled due to his work in the Conciliator faction
In 1950, Arendt rekindled her friendship with Heidegger. They shared a romantic relationship for two years.
Hannah Arendt passed away in New York City on December 4, 1975, due to heart attack. She was buried alongside her husband, Heinrich Blücher who died in 1970, at Bard College in Annandale-on-Hudson, New York.
Since 1995, Hannah Arendt Prize for Political Thought was initiated by German Heinrich Böll Foundation and the Government of Bremen. The award is presented to individuals whose line of thought and action are equivalent to Hannah Arendt’s beliefs as a political theorist.
Recommended Lists:
Intellectuals & Academics #47
You May Like

Quotes By Hannah Arendt | Quote Of The Day | Top 100 Quotes

See the events in life of Hannah Arendt in Chronological Order