Advanced Search
Founder of Pakistan People’s Party, Zulfikar Ali Bhutto was a prominent politician, who brought about numerous reforms and changes in the governance of Pakistan, thereby taking it from a presidentially-led country to a parliamentary-led one. It was under his democratic premiership that the country witnessed the declaration of Pakistan's third 1973 constitution. Furthermore, Bhutto led Pakistan’s nuclear weapon programme, despite several shortcomings in the form of limited financial resources and strong western oppositions and is thus regarded as the Father of Nuclear Weapons Program in Pakistan. It was his strong personality clubbed with his aggressive nature and immense determination that made him the country’s greatest civilian leader, with him dominating almost the entire decade of the 70s. Born in a political environment, he rose to prominence as a leader soon enough. He served two important positions for the country, that of the 4th President from 1971 until 1973 and 9th Prime Minister from 1973 to 1977. Till date, he remains one of most controversial leaders of the country. In the following lines, we have provided detailed information about the childhood, life, profile and political pursuits of Zulfikar Ali Bhutto. Read on. Asif Ali Zardari
DID WE MISS SOMEONE?
CLICK HERE AND TELL US
WE'LL MAKE SURE
THEY'RE HERE A.S.A.P
Quick Facts

Pakistani Celebrities
Political Leaders
Pakistani Men
University Of California, Berkeley
Christ Church, Oxford
Childhood & Early Life
Zulfikar Ali Bhutto was born to Sir Shah Nawaz Bhutto and Khursheed Begum nee Lakhi Bai, in Larkana, Sindh in present day Pakistan. His father was the prime minister of the erstwhile Junagadh estate.
He studied at Cathedral and John Connon School in Bombay (present day Mumbai). Growing in a prominent political family, politics ran in the blood of this young lad. As such, while at school, he became a student activist and made valuable contribution in the social movement and nationalistic league.
He enrolled himself at the University of Southern California in 1947 to study political science. Two years later, he was transferred to the University of California, Berkeley from where he attained his graduation degree.
In 1950, he moved to United Kingdom to study law at Christ Church. By 1953, he had attained an LLB degree followed by an LLM degree in Law and M. Sc in Political Science.
His first vocation was that of a lecturer at the Sindh Muslim College. After the death of his father, he took over the management of his family's estate and business interests. 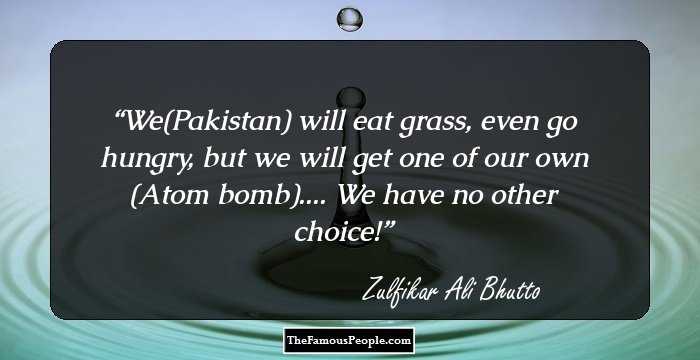 Quotes: Will
Continue Reading Below
Political Career
In 1957, he became the youngest member of Pakistan's delegation to the United Nations. Following year, he led Pakistan delegation to the inaugural United Nations Conference on the Law of the Sea.
His political career met with a breakthrough when he was appointed as a cabinet minister in the Ministry of Water and Power in 1958 by Field Marshal Ayub Khan.
In 1960, he was given the charge of the Ministry of Commerce, Communications and Industry.
In 1963, he was appointed Foreign Minister of the country. In this capacity, he worked to build close ties with China and sought to achieve greater independence from the western influence. It was his aggressive approach and style that earned him national prominence and popularity.
He was highly. critical of the Tashkent agreement between Pakistan President Ayub Khan and Indian Prime Minister Lal Bhahadur Shastri in the aftermath of 1965 Indo-Pak war. Under the agreement, both the nations agreed to exchange prisoners of war and withdraw respective forces to pre-war boundaries. In protest against the agreement, Bhutto resigned from the cabinet in June 1966.
In 1967, he established Pakistan People’s Party, along with Dr. Mubashir Hassan, J.A. Rahim and Basit Jehangir Sheikh. The party became a part of the pro-democratic movement and denounced Ayub Khan’s regime as a dictatorship, demanding his resignation.
Following the stepping down of the Ayub Khan, elections were held in 1970. Though the PPP party gathered much support from the West Pakistan, it wasn’t enough as in East Pakistan Sheikh Mujib's Awami League received twice as many votes as PPP.
Bhutto refused to accept an Awami League government and demanded that Sheikh Mujib form a coalition with the PPP. Sheikh Mujib didn't accepted this proposal and declared independence. This resulted in widespread violence and civil war. The result of the war was the emergence of Bangladesh as an independent state.
The defeat resulted in the stepping down of President Yahya Khan and Bhutto became the President and the first civilian Chief Martial Law Administrator of Pakistan on December 20, 1971.
Continue Reading Below
During his term as the President, he uplifted the state of emergency, thus allowing opposition governments to be formed. His main aim was to eliminate poverty and revitalise the economy, industry and agriculture.
He formed a new Constitution for the country, changing it from a presidential system to a parliamentary one, wherein the President was only a figurehead and the administrative power lay with the Prime Minister
Securing a total of 108 votes from 146 members, he took up the position of the Prime Minister of Pakistan on August 14, 1973. In his five years of term, he made extensive reforms changing the capitalistic and western policy to a socialistic system.
While his constitutional reforms of 1973 shaped the future of politics of the country, his domestic reforms gave the downtrodden a voice, radically changing the economic condition of the country in their favour.
He worked for the improvement of workers' rights and nationalized several key industries including banking sector. He made revolutionary effort to expand education during his rule. A large number of schools and colleges were built. The establishment of world-class Quaid-e-Azam University and Gomal University have been credited to him.
He brought about several land reforms empowering the small scale farmer. He aimed to make the country self-sufficient. He established Federal Flood Commission, which was tasked to prepare national flood protection plans, and flood forecasting and research to harness floodwater
As his term progressed, he became increasingly unpopular and garnered criticism for being the mastermind behind the murder of opposition leader Ahmad Raza Kasuri's father. Surprisingly, his own party members also revolted against him.
In 1977, opposition parties joined hands to form Pakistan National Alliance (PNA). Bhutto called for fresh elections and though PNA lost the elections they claimed that the elections were rigged and boycotted provisional elections. They further announced the PPP led government as illegitimate.
Political and civil unrest led to negotiation amongst the PPP and PNA leaders. Though fresh elections were called, Bhutto was arrested by troops on July 5, 1977 under the order of General Zia-ul-Haq. Martial law was enforced in the Pakistan and the constitution was suspended.
Bhutto was tried for his role in the conspiracy to murder of of opposition leader Ahmad Raza Kasuri's father. Bhutto was held guilty of murder and was sentenced to death.
Personal Life & Legacy
He married twice in his lifetime. The first was in the year 1943 to Shireen Amir Begum. However, he left her to remarry Begum Nusrat Ispahani on September 8, 1951. The couple was blessed with four children.
The trial of a murder case in which he was charged guilty lasted for several months. The Supreme Court issued a verdict in which he was labelled guilty. Despite petitions and international clemency claims, he was hanged at Central Jail, Rawalpindi, on April 4, 1979. He was buried at Garhi Khuda Baksh in a village cemetery.
He has been voted as Pakistan’s one of the few greatest leader, after Mohammad Jinnah, founder of Pakistan and Imran Khan cricketer-turned-politician. His supporters’ bestowed upon him the title Quaid-e-Awam (Leader of the people).
Trivia
He was the founder of Pakistan People’s Party. He served as the President and Prime Minister of Pakistan from 1971 to 1973 and 1973 to 1977 respectively.
He is known as the Father of the Pakistan's Nuclear weapons program.
Recommended Lists:
Leaders #794