(The Founder of Pakistan)

The founder and first Governor General of the state of Pakistan, Muhammad Ali Jinnah was one of the most influential political leaders in the Indian subcontinent during the British rule. A lawyer by profession, this eminent politician and statesman held several important positions in his lifetime and gradually became instrumental in the creation of Pakistan. An intellectual and eloquent orator, Jinnah’s life was shrouded in several controversies. During the first half of his political career, he was hailed as an ambassador of Hindu-Muslim unity by prominent leaders, such as Tilak and Nehru. Even as the demand for a separate country for Indian Muslims started to surface, Jinnah advocated a unified India as he believed that the traditions and rights of the Muslim would be safe in a unified India. During the 1930s and 1940s, there was a fundamental shift in his thinking and differences started arising between Jinnah and the Congress leaders. He began to drift towards the demand for a separate country for Muslims and successfully negotiated the creation of Pakistan with the British. Nawaz Sharif
DID WE MISS SOMEONE?
CLICK HERE AND TELL US
WE'LL MAKE SURE
THEY'RE HERE A.S.A.P
Quick Facts

Muhammad Ali Jinnah was born Mahomedali Jinnahbhai on 25 December 1876, in Karachi, Bombay Presidency, British India. He was born to a middleclass Guajarati merchant Jinnahbhai Poonja and his wife Mithibai. His parents were from Paneli, Gondal and had shifted to Karachi just a year before his birth.

Second of seven siblings, his family belonged to the creed of Ismaili Khoja of Shia Islam. However, he later became a staunch follower of the Twelver Shi'a teachings.

Initially enrolled at ‘Sindh-Madrasa-tul-Islam’ at the age of six, he soon moved to Bombay with his aunt and is said to have attended either ‘Gokal Das Tej Primary School’ or perhaps a madrasa. Later, he attended ‘Cathedral and John Connon School.’

Indocile and restless, he returned to his parents in Karachi within a few months. There, he was enrolled at the ‘Christian Missionary Society High School.’ 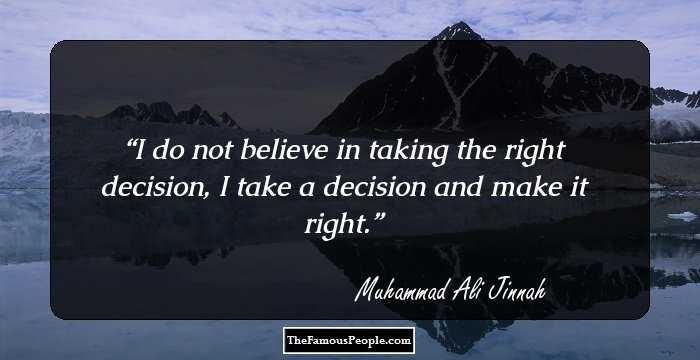 He decided to move to London in 1892, at the age of 16, when he was given an opportunity to work as an apprentice in Sir Frederick Leigh Croft’s company ‘Graham's Shipping and Trading Company.’

Before leaving, he succumbed to his mother’s relentless insistence and got married to Emibai Jinnah. However, both his mother and Emibai died while he was in England.

An ambitious teenager, he later resigned from the apprenticeship and started pursuing law to become a barrister. He joined the ‘Lincoln's Inn’ and in 1895 was called to the bar in England. 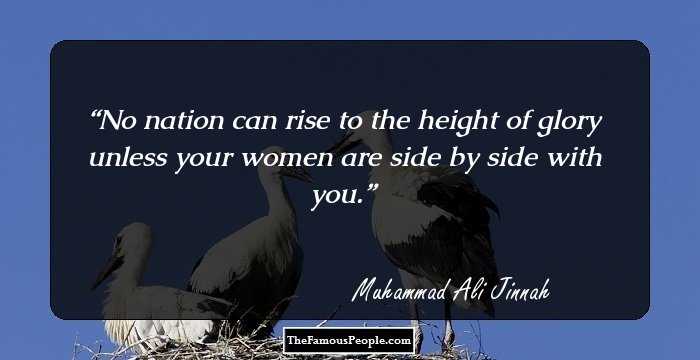 Jinnah started practicing law in Bombay at the age of 20. His career as a barrister started to flourish after he received an invitation from the Advocate General of Bombay to work from his chambers.

In 1900, he was also offered the position of the Bombay Presidency Magistrate, which he served for a short while. His fame as a lawyer increased after he fought the ‘Caucus Case’ in 1907.

Though he failed to secure a bail for Bal Gangadhar Tilak in 1908, he was able to save him from prison sentence when he was charged again with sedition in 1916.

He became interested in politics during his frequent visits to the House of Commons while studying at ‘Lincoln's Inn’ but his actual political affiliation started after he attended the 20th annual meeting of the ‘Indian National Congress’ in 1904.

In 1906, he joined the Congress and started participating in the Indian Independence movement. He strongly opposed separate electorate for Muslims and was elected to the ‘Imperial Legislative Council’ as Bombay's Muslim representative in 1909.

In 1912, he attended a meeting organized by the ‘Muslim League.’ A year later, he joined the party while still remaining affiliated to the Congress and tried his best to bring the Congress and the League together.

In 1913, he was one of the members of the delegation sent to England on behalf of Congress, led by Gokhale. He was hailed as an ambassador of Hindu-Muslim unity by Congress leaders and was immensely admired for his liberal ideologies.

In 1916, while he was serving as the president of the ‘Muslim League,’ Congress and the League signed the ‘Lucknow Pact,’ which was seen as a ray of hope to Hindu–Muslim unity. The same year, he also played a key role in establishing the ‘Home Rule League.’

In 1923, he was elected as the Muslim representative for Bombay in the Central Legislative Assembly. He was extremely effective as a parliamentarian and also started working with the ‘Swaraj Party.’

By 1926, things started to fall apart between the Congress and Jinnah and he started supporting separate electorates for Muslims. He, however, continued to believe that Muslim tradition and rights would not have any threats under united India. 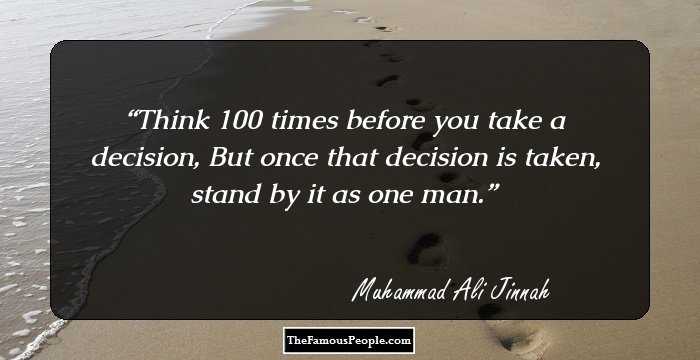 Quotes: You, Life, Think
Pakistan Movement & Partition
During the 1930s, demands for a separate Muslim state in the Indian subcontinent started to surface; it was initiated by Sir Muhammad Iqbal.

Jinnah came up with the proposal of partition at the ‘Muslim League Conference’ in 1940. He demanded a separate Muslim state, encompassing areas that had mostly Muslim population.

Around this time, there were indications that ‘Muslim League’ would merge with the ‘National League.’ However, in 1942, the League changed its stance and sided with Jinnah, demanding partition.

In 1947, Lord Mountbatten was sent to India by the Clement Attlee administration. Mountbatten was entrusted with the responsibility of handing over the powers to India and drawing the outlines for a separate state of Pakistan.

On 14th August 1947, Jinna’s envisioned state of Pakistan came into existence and he was made the Governor General of the newly formed Muslim state.

Jinnah died a year after partition and didn’t have too much of a role to play in the formative years of Pakistan.

Most of the controversies surrounding Jinnah pertain to his role in partition of India and Pakistan and his sudden demand for a separate state for Muslims. His transformation from a secular leader to a pro-Pakistan Movement leader is subjected to speculations and many unfounded theories.

There are many controversies and theories surrounding a statement of regret that he allegedly made from his death bed. According to the statement, he said that Pakistan was his biggest mistake. It is a very famous albeit uncorroborated statement.

In 1925, to honor his contributions as a legislator, he was offered a knighthood by Lord Reading, which he rejected saying, “I prefer to be plain Mr. Jinnah.”

He was sworn as the first Governor General of the state of Pakistan a day after its creation.

Jinnah married Emibai when he was just 16 years old. He married her before he left for England in 1892. She died while he was in England.

On one of his trips to Darjeeling, he met a 16-year-old Rattanbai and married her after a couple of years on 19 April 1918. Rattanbai was 18 years old and had converted to Islam at the time of her wedding. The couple had a daughter named Dina. Jinnah and Rattanbai separated in 1928.

He passed away on 11th September 1948 in Karachi, a year after the creation of Pakistan. He was suffering from tuberculosis.

He is featured on all Pakistani currency notes and several Pakistani public institutions bear his name.

Cinnah Caddesi, one of the largest streets in the Turkish capital Ankara, was also named after this prominent politician and statesman.

There is also a ‘Mohammad Ali Jenah Expressway’ in Teheran, Iran.

His greatest legacy is the state of Pakistan. Describing the effect that his actions eventually had on the world, Wolpert stated, “Few individuals significantly alter the course of history. Fewer still modify the map of the world. Hardly anyone can be credited with creating a nation-state. Mohammad Ali Jinnah did all three.”

A prominent Muslim leader of the Indian subcontinent, he supported the British Crusaders when they launched a war against the Islamic Khilafah during the ‘First World War.’

This ‘Muslim League’ leader remained addicted to smoking throughout his life and also enjoyed drinking alcohol at private gatherings with his close friends.

His childhood house in Bombay was a matter of great dispute regarding its ownership between the Indian and the Pakistani governments for quite some time.

In 2009, a biographical book of Jinnah, written by a prominent Indian politician, generated fresh controversies and eventually led to the writer’s expulsion from his political party.