Advanced Search
Woodrow Wilson was the 28th president of the United States. He served in the office for two terms, from 1913 to 1921. He led America during ‘World War I,’ and played a major role in the conclusion of the ‘Treaty of Versailles.’ He was also instrumental in the formation of the ‘League of Nations,’ which served as a precursor to the ‘United Nations Organization.’ For his lead role in the formation of the ‘League of Nations,’ Wilson was awarded the 1919 ‘Nobel Peace Prize.’ Born into a devout Presbyterian family, Wilson had an ordinary academic record in school and was affected by dyslexia. But he overcame his issues and became a dedicated scholar. He went on to study law and earned his Ph.D. in political science and history. He started teaching at ‘Princeton University’ in 1890 and served as the president of ‘Princeton University’ from 1902 to 1910. He entered politics in 1910, becoming the governor of New Jersey on Democratic Party ticket. Wilson was chosen as Democratic Party’s presidential candidate for the 1912 elections and he won the election quite easily. When ‘World War I’ broke out, he initially adopted the policy of neutrality but was later forced to enter the war due to Germany’s unrestricted submarine warfare. As president, he undertook several progressive reforms. He supported the 19th Amendment, allowing women to vote. For his able leadership, Woodrow Wilson is ranked amongst the top ten U.S. presidents. Cause of Death: Neurological Disease

American Celebrities
Presidents
Political Leaders
American Men
Princeton University
Childhood & Early Life
Woodrow Wilson was born Thomas Woodrow Wilson on December 28, 1856, in Staunton, Virginia, USA, to Joseph Ruggles Wilson and Jessie Janet Woodrow. His father was a Presbyterian minister.
During his childhood, Wilson witnessed the ravages of the ‘Civil War’ from close quarters.
Wilson suffered from a form of dyslexia. As a result, he had an ordinary academic record in school. He overcame his academic limitations by studying at home with his father, who instilled a passion for oratory and debate in his son.
In 1873, Wilson got enrolled at ‘Davidson College’ in North Carolina, but transferred to ‘Princeton’ in 1875. He graduated in 1879.
In 1879, he joined the ‘Law School’ at the ‘University of Virginia.’ After graduating from the ‘Law School,’ he practiced law for a year in Atlanta, Georgia, but his practice did not flourish.
In 1883, he took admission into the ‘Johns Hopkins University’ to study history and political science. In 1886, he earned his PhD; his thesis was 'Congressional Government: A Study in American Politics.' 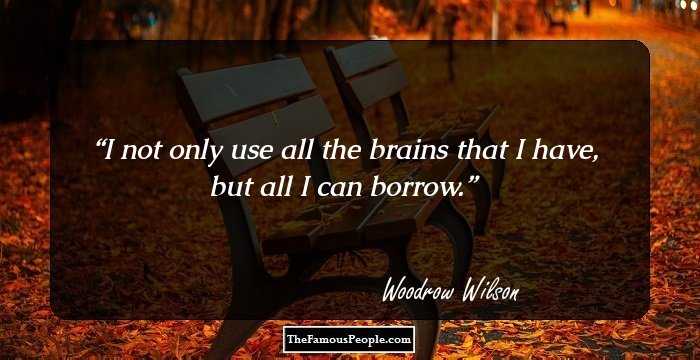 Quotes: I
Continue Reading Below
Career
Wilson taught ancient Greek and Roman history at ‘Bryn Mawr College’ from 1885 to 1888. Thereafter, he joined ‘Wesleyan University’ where he coached the football team and founded the debate team.
In 1890, he became a professor of jurisprudence and political economy at the ‘Princeton University.’ He also served as the university’s president from 1902 to 1910.
Wilson was a very popular teacher during his stint in ‘Princeton University’ and was known for his progressive ideas on reforming education. He wanted to change the admission system and pedagogical system, and wanted to introduce innovative curriculum upgrades.
In 1910, he entered politics by contesting New Jersey’s gubernatorial election on Democratic Party’s ticket. Wilson won the election by defeating Republican candidate Vivian M. Lewis and became the governor of New Jersey.
As governor, he focused on four major state reforms—electoral reforms, a corrupt practices act, Workmen's Compensation, and establishment of a commission to regulate utilities.
In 1912, Wilson was chosen as Democratic Party’s candidate for the presidential election. He won the election easily as the Republican vote was split between William Howard Taft and Theodore Roosevelt.
He became the 28th president of the United States on March 4, 1913. Immediately upon assuming the office, he rolled out his reforms agenda. He introduced the ‘Federal Reserve System,’ checked monopolies and unfair trade practices, established an eight-hour workday with additional pay for overtime work for interstate railroad workers, and increased credit to rural farmers.
When ‘World War I’ broke out in Europe on July 26, 1914, Wilson initially adopted a policy of neutrality. He believed that in order to fight one must be brutal and ruthless.
Wilson was re-elected for a second term in 1916. His policy of neutrality played a major role in his win and his election campaign revolved around the slogan "He kept us out of war."
Continue Reading Below
During his second term, he was forced to review his policy of neutrality due to Germany’s unrestricted submarine warfare. Germany ignored America’s neutrality and sunk American ships.
The United States entered ‘World War I’ in April 1917 and Wilson led the nation well during this period. After the war ended, Americans were perceived as heroes.
After the conclusion of the war, Wilson proposed the ‘Fourteen Points’ as the basis for the peace treaty at Versailles; the last point was the creation of ‘League of Nations’ to ensure world peace. ‘League of Nations’ served as a precursor to the present ‘United Nations Organization’ and its main purpose was to ensure that no such war happens in the future.
The European nations accepted the formation of ‘League of Nations,’ but Wilson suffered a setback when the U.S. Senate declined to approve the American acceptance of the ‘League of Nations.’
On the domestic front, he endorsed the 19th Amendment in 1918, allowing women to vote.
He suffered a serious stroke in October 1919, and never fully recovered in the remaining 17 months of his term in office. 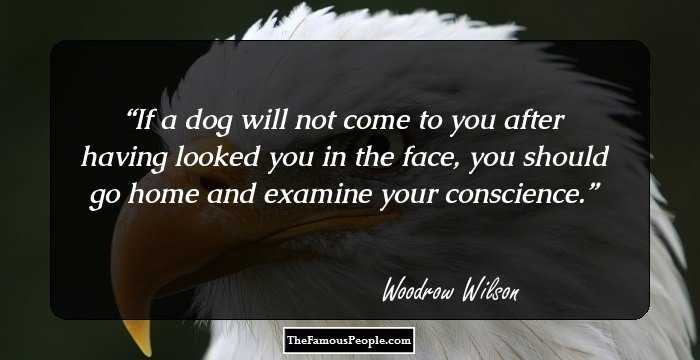 Quotes: You, Home, Will
Major Works
During his term as president, the American Congress passed several progressive legislations. These include: ‘Federal Reserve Act,’ ‘Federal Trade Commission Act,’ ‘Clayton Antitrust Act,’ ‘Federal Farm Loan Act,’ and the ‘Adamson Act.’
After the conclusion of ‘World War I,’ he was instrumental in the formation of the ‘League of Nations,’ a multilateral organization formed to ensure world peace.
Awards & Achievements
Woodrow Wilson was awarded the ‘Nobel Peace Prize’ in 1919, in recognition of his efforts in the formation of the ‘League of Nations.’ 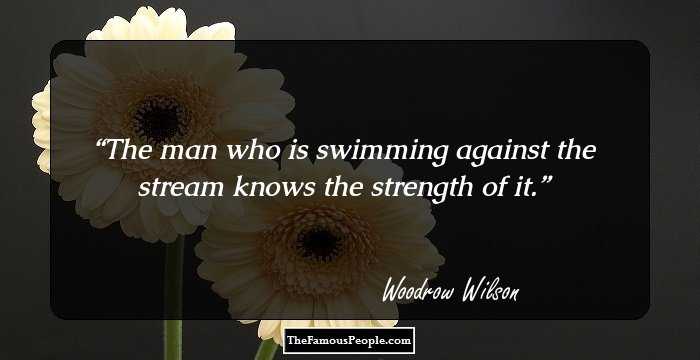 Quotes: History
Personal Life & Legacy
Wilson fell in love with Ellen Louise Axson, an accomplished artist, and the two got married in 1885. The couple had three daughters and remained married till Ellen's death in 1914.
Wilson married Edith Bolling Galt in December 1915. It is said that when Wilson suffered a serious stroke in October 1919, Edith hid the severity of his illness and made decisions in his stead.
Woodrow Wilson died on February 3, 1924, at the age of 67.
His body was interred in a sarcophagus in ‘Washington National Cathedral.’ He is the only president whose body was interred in the nation's capital.
Trivia
He was the first U.S. president to travel to Europe while in office.
Wilson was inducted into the ‘New Jersey Hall of Fame’ in 2010.

Quotes By Woodrow Wilson | Quote Of The Day | Top 100 Quotes

See the events in life of Woodrow Wilson in Chronological Order