Theodore Roosevelt was one of the most eminent politicians of United States who went on to serve as the 26th President of the country. It would be surprising to know that during his early days, Roosevelt primarily remained sick with asthma attack and chronic illness and was advised to take up desk job to live a healthy and long life. Interestingly, he lived up till 61 years of age and all through remained hyperactive with his political pursuits. Had it not been for his willingness to go beyond the boundaries America would not have had its first ever truly modern President. Roosevelt, during his term in office, changed what it meant to be a President by expanding the power of the presidency, through his proclamations, acts and policies. It was his foresightedness that allowed America to enter the new century with newer vision and greater power. During his rule, the country transformed much, dealing with several issues related to civil rights, racial discrimination and women suffrage. Adorned with two of the highest decorations, Nobel Peace Prize and Congressional Medal of Honor., Roosevelt was one of the most significant leaders of America who changed the face of the nation throughout the world. With this article, learn some more interesting facts about this charismatic and exuberant personality. American Celebrities
Presidents
Political Leaders
American Men
Harvard College
Childhood & Early Life
Theodore Roosevelt Jr was born to Theodore "Thee" Roosevelt Sr. and Martha "Mittie" Bulloch in New York City. He was the second of the four children born to the couple.
Nicknamed Teedie, much of his early years were inflicted with illnesses and bouts of asthma attack. However, he was hyperactive as a child and did not let his illness dominate. He trained himself at boxing to enhance physical strength.
He developed a lifelong fantasy for zoology when he was seven. After being homeschooled, he enrolled at the Harvard College in 1876 from where he graduated with a magna cum laude in 1880.
He took admission at Columbia Law School but did not show much interest in legal career. As such, when he was offered a chance to run for New York Assembly, he immediately agreed, dropping out of college in 1881. 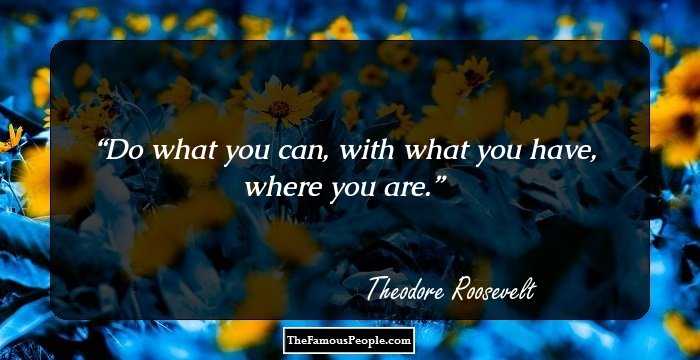 Quotes: You
Continue Reading Below
Career
He remained a member of the New York State Assembly for three consecutive years, from 1882 to 1884 and was the youngest ever to serve the position. He served various public service positions including captain of the National Guard and minority leader of the New York Assembly.
The tragic death of his mother and wife in 1884 led him to move over to the Dakota Territory. After a brief period of hiatus, during which time he worked as a cowboy and cattle rancher, he returned to politics in 1886.
In 1886, he ran for the New York Mayorship elections as a Republican candidate but lost the same to the Democratic candidate Hewitt.
Unaffected by the loss, he continued to pursue a career in public service. In 1888, he was appointed to the United States Civil Service Commission, where he served until 1895.
He became president of the board of New York City Police Commissioners in 1895 and during his two-year stint radically reformed the police department, which was considered as one of the most corrupt in America.
In 1897, President William McKinley appointed Roosevelt to the post of Assistant Secretary of the Navy. He played a significant role in preparing the Navy for the Spanish-American War.
His interest in the Spanish-American War led him to give up on his governmental post and organize a voluntary cavalry, which he named Rough Riders. He served as the Colonel for the Regiment.
The Rough Riders bravely fought the Battle of San Juan Heights and succeeded. He was even nominated for Congressional Medal of Honor, America’s highest military honor for his courageous antics.
Despite returning to civil life, he was popularly referred to as Colonel Roosevelt. In 1898, he was elected as the Governor of New York. His growing popularity and progressive policies seemed to be endangering for the Republicans, who nominated his as the Vice Presidential candidate to McKinley in 1900 presidential elections.
Continue Reading Below
However, after the assassination and the untimely death of McKinley, he was appointed to the post of the President on September 14, 1901. He continued with the policies of McKinley. His first work was curbing the growing power of trusts through the Sherman Antitrust Act.
In 1904, he won the Presidential elections in a landslide victory. As a President, he looked to uplift the working and middle class by introducing domestic programs that reformed American workplace. Furthermore, he brought about government regulation of industry and consumer protection.
He started a public relation effort with an aim to make America take center-stage at the world forum. For the same, he bulked up the US Navy and created a ‘Great White Fleet’ and directed it on a world tour.
What’s more, he accelerated the work of the Panama Canal, as a result of which ships could pass between the Atlantic and Pacific oceans in half the time than what they then took.
He played a pivotal role in bringing an end to the Russian-Japanese War, through his Monroe Doctrine, which gave US the right to intervene in case of wrongdoings by a Latin American nation.
Tagged as the country’s first modern president, he dealt with numerous issues during his rule, including civil rights, racial discrimination and women suffrage.
While his infrastructure policies took care of the development of the nation, his National Monuments Act drew attention and care towards preserving national heritage sites, sanctuaries and reserves.
In 1908, he decided not to run for another term and instead supported his friend and former Secretary of War William Howard Taft in the presidential elections, which Taft won.
For the next couple of years (1909–1910), he embarked on a tour, including one as a special ambassador to England.
Continue Reading Below
Upon returning, he was disappointed with Taft’s handling of government and decided to run for the presidency. However, since Taft was running as the Republican candidate, he sought to start a new party and run from it.
He initiated the Progressive or Bull Moose Party and started campaigning for the 1912 elections. It was during the campaigning that he barely escaped an assassination attempt by John Nepomuk Schrank. He lost the elections to Woodrow Wilson in a close call.
During World War I, he jumped back to the political scene, frustrated at Wilson’s stand for neutrality. He strongly supported the Allies and demanded for harsher policy against Germany. When US entered the war, he beseeched to head the volunteer division for service in France but was denied.
In 1916, he again considered running for the presidential seat but gave up in favour of Republican Party nominee Charles Evans Hughes.
Political career aside, he had published about 25 books in his lifetime, touching a range of subjects including history, geography, biology and philosophy. He even published a biography and autobiography, Rough Riders. His most ambitious book was ‘The Winning of the West’, which comprised of four volumes 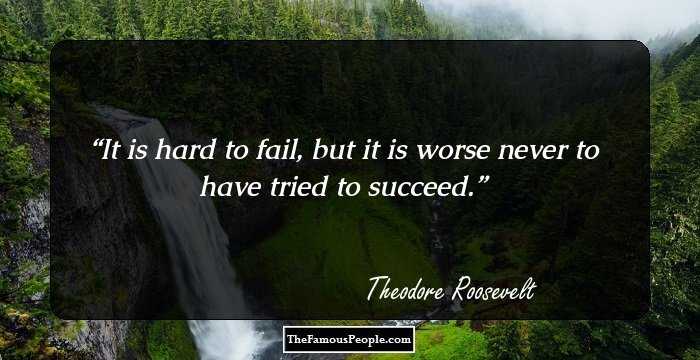 Quotes: Never
Awards & Achievements
In 1906, he became the proud recipient of the Nobel Peace Prize for his contribution to bring an end to the Russian-Japanese War. He is one of the only three sitting American presidents to have won the prestigious award.
In 2001, he was posthumously conferred with the Congressional Medal of Honor. Till date, he is the only president to be honoured with the America’s highest military honor.
Personal Life & Legacy
He first tied the nuptial knot with Alice Hathway Lee of Massachusetts in 1880. They were blessed with a daughter.
The tragic death of his wife on February 14, 1884 led him to remarry in 1886 to childhood friend, Edith Kermit Carow. The couple was blessed with five children.
Since a young age, he was advised to take up a desk job due to his weak heart and poor health conditions. However, he refuted the advice and remained active till the end of his life.
He died in his sleep on January 6, 1919, at his Long Island estate, Sagamore Hill, after suffering a coronary embolism. He was buried at the Youngs Memorial Cemetery in New York. 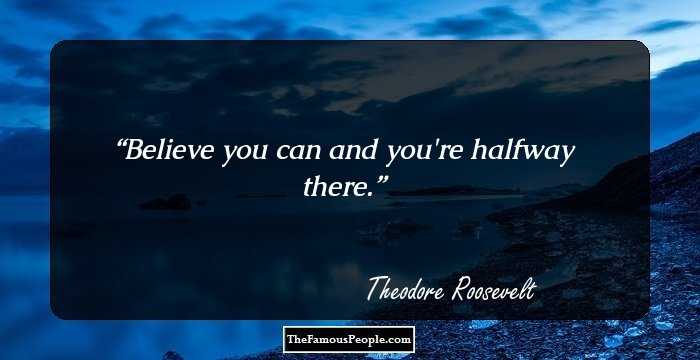 Quotes: You, Believe
Trivia
Interestingly, the Teddy Bear that young boys and girls across the world play with today has been named after this great American President, despite his contempt for being called ‘Teddy’.

Quotes By Theodore Roosevelt | Quote Of The Day | Top 100 Quotes

See the events in life of Theodore Roosevelt in Chronological Order