(British Author Best Known for Her Gothic Novel ‘Frankenstein; or, The Modern Prometheus’)

Mary Shelley was an English novelist renowned for her fictional writing and the ghastly themes she employed in her novels. She was born to Mary Wollstonecraft and William Godwin who were literarily and politically active. Her mother was a feminist and the author of ‘A Vindication of the Rights of Woman.’ Mary was not fortunate enough to get enriched by her mother’s knowledge as she died soon after Mary’s birth. Mary had to go through tremendous psychological turmoil as her father re-married, leaving her to deal with her step-mother who was unfair to her. However, she learnt to deal with the turmoil by indulging in writing and spending time dwelling on imagination. This helped her to overcome the mental stress and also enhanced her imagination which in turn helped her in her career as a fictional author. This writer did not have any formal education but was fortunate to live in the company of many literary geniuses like Wordsworth, Coleridge, Byron, and P. B. Shelley. She penned her first novel ‘Frankenstein’ which is regarded as one of the best known horror stories till date. Her narration and detailed description often grab the readers’ attention. She is also credited with creating some of the best-known ghostly characters in the world of fiction.

Emily Brontë
DID WE MISS SOMEONE?
CLICK HERE AND TELL US
WE'LL MAKE SURE
THEY'RE HERE A.S.A.P
Quick Facts

British People
British Women
Virgo Writers
Women Writers
British Writers
Childhood & Early Life
Mary Shelley was born Mary Wollstonecraft Godwin on 30 August 1797, in Somers Town, London, to writer and philosopher William Godwin and Mary Wollstonecraft. She had a half-sister named Fanny Imlay and they were raised by William Godwin after the death of their mother.
Later, her father married Mary Jane Clairmont who is believed to have been biased. She did not advocate Mary’s education. However, Shelley managed to educate herself informally with the books her father’s library had. 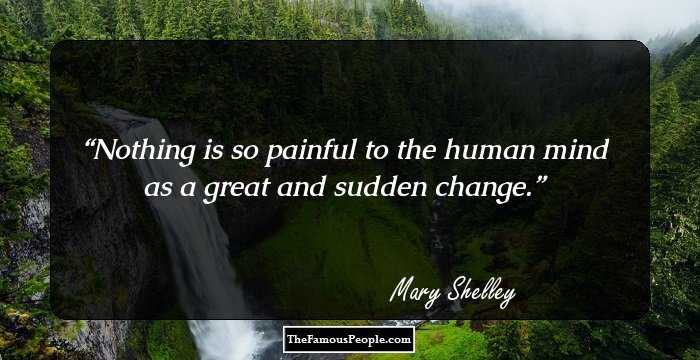 Quotes: Change
Continue Reading Below
Career
She also had the opportunity to be with literary stalwarts like William Wordsworth and Samuel Taylor Coleridge, who visited Godwin’s house when she was a child. She indulged in writing when she wanted to escape the hustle and bustle of life. Her first poem ‘Mounseer Nongtongpaw’ was published in the year 1808.
In 1812, she visited her father’s acquaintance William Baxter’s house in Scotland where she experienced homely environment which she had never felt before. She visited his place again the following year.
In 1816, inspired by the company of Lord Byron and Polidori, which she had during the vacation at Geneva, Switzerland, Mary Shelley began to draft her first novel ‘Frankenstein; or, The Modern Prometheus.’
In 1817, this writer released a travelogue titled ‘History of a Six Weeks Tour’ based on her sojourn in Europe. Around the same time, she continued to work on her horror novel.
‘Frankenstein; or, The Modern Prometheus’ was published in 1818. Though it was Mary Shelley’s novel, readers thought it to be her husband Percy Bysshe Shelley’s creation as the introduction to the novel was written by him. Soon after its release, the novel became a bestseller. The same year, the Shelleys traveled to Italy.
After her husband’s tragic demise, she returned to England and took to writing in order to earn a living. In 1823, she published her historical novel ‘Valperga: or, the Life and Adventures of Castruccio, Prince of Lucca.’
In 1826, she penned ‘The Last Man’ which is an apocalyptic science fiction novel. She published few other novels, such as ‘The Fortunes of Perkin Warbeck: A Romance,’ ‘Lodore,’ and ‘Falkner.’
She even worked towards protecting and upholding her husband’s literary pieces and position in the literary world. ‘Posthumous Poems of Percy Bysshe Shelley’ and ‘The Poetical Works of Percy Bysshe Shelley’ were published by Mary Shelley after the death of her husband P. B. Shelley.
This writer also wrote some articles for publications, such as ‘The Westminster Review’ and ‘The Keepsake.’ Her travelogue ‘Rambles in Germany and Italy’ was published in the year 1844.
Continue Reading Below
‘Mathilda’ was her second novel, but it was published posthumously, after nearly a century, in the year 1959. This novel encompasses the themes of suicide and incest. 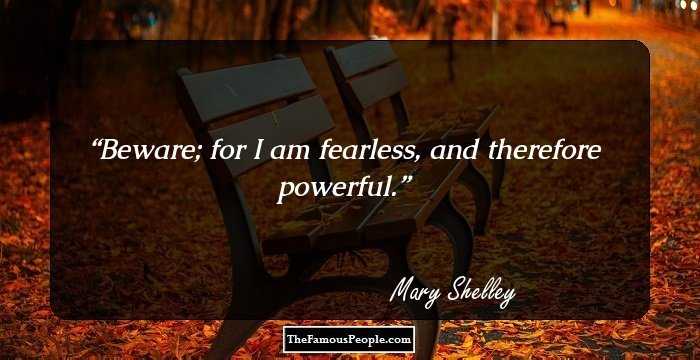 Quotes: I
Major Works
Her first novel met with immense success soon after it was published. It remains a renowned literary piece till date. There have been many stage and screen adaptations of this novel.
Her other novels, such as ‘The Last Man’ and ‘Mathilda’ are also regarded as works of literary significance. All her works deal with different themes and have been regarded by many as great literary pieces.
Personal Life & Legacy
Mary and writer Percy Bysshe Shelley began a relationship in the year 1814 when Percy Bysshe Shelley was already married to Harriet. Mary and Percy’s relationship was not accepted by Godwin and the couple along with Mary’s half-sister Claire Clairmont moved to France.
The couple faced a lot of problems including financial difficulties which forced them to return to England. By the time they returned to England, Mary was already pregnant with Percy Bysshe Shelley’s child. In 1815, their child was born but did not live long. The following year, they traveled to Geneva along with Claire Clairmont, and were accompanied by Lord Byron and Polidori during their vacation at Geneva.
In 1816, Mary was grieved by her half-sister Fanny’s death and Percy’s wife Harriet also committed suicide the same year.
In December 1816, Mary and Percy Bysshe Shelley got married. However, the couple did not have an easy life as their life was shrouded with tragedies.
They suffered the loss of three children and the fourth child Percy Florence was the only one to survive into adulthood. Mary was struck with another blow when her husband P. B. Shelley met with a tragic death in the year 1822.
This author breathed her last on 1 February 1851 at Chester Square after suffering from a long-term illness. She was suffering from brain tumor as stated by the doctors. Her final resting place is at St. Peter’s church in Bournemouth, England. 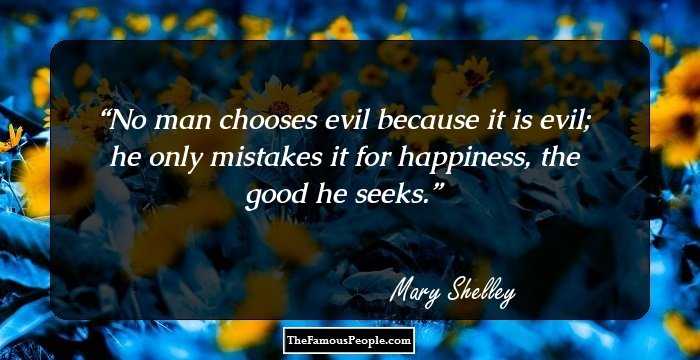 Quotes By Mary Shelley | Quote Of The Day | Top 100 Quotes

See the events in life of Mary Shelley in Chronological Order