Jane Austen was an English author best known for her six major novels, which interpret the British landed gentry at the end of the 18th century. Born into a large and close knit family that belonged to the lower fringes of the English gentry, she wrote what she had seen and experienced. She started writing at the age of 12. By the age of 18, she had created a large volume of work, which shows her dislike for sentimental fictions. Her first serious work ‘Lady Susan’ was written at the age of 19. She then went on to produce more novels. However, none of them found publishers until she settled down in Chawton, and her brother Henry began to act as her literary agent. Thereafter, four of her novels were published in quick succession; the rest were published shortly after her death. Image Credit
https://www.youtube.com/watch?v=1qBHZjqPEEw
(The Times of India)
Previous   Next

British People
British Women
Women Writers
British Writers
Women Novelists
Childhood & Early Life
Jane Austen was born on 16 December 1775, in the village of Steventon in Hampshire. Her father Reverend George Austen was the rector of the Anglican parishes of Steventon and Deane. A voracious reader, he owned a vast library and often supplemented his income by tutoring students for Oxford.
Her mother Cassandra (née Leigh) was famous for her wit, impromptu verses, and stories. Jane was the seventh of their eight children; she had six brothers named James, George, Edward, Henry, Francis, Charles, and an elder sister named Cassandra.
From childhood, Jane was fond of her sister. Their mother had once said, "If Cassandra's head had been going to be cut off, Jane would have hers cut off too."
Cassandra was an amateur watercolorist who created two of Jane’s portraits. Like Jane, she too never married and the two sisters lived together all their life. When they were not together, they wrote extensively to each other; more than one hundred such letters have been found.
Jane was also very close to Henry who started his career as a banker but later became a clergyman. He had a large circle of friends and exposed Jane to a society that she otherwise would not have known. Later, he served as her literary agent.
Her brother James was ten years senior to her. Her second brother George was deaf and mute. Although he mostly lived away from home, Jane taught herself enough sign language to communicate with him.
Her third brother Edward was adopted by a distant relative named Thomas Knight. She spent the last few years of her life in his estate, which he had inherited from his adoptive parents. Francis and Charles joined the navy, both reaching the rank of admiral.
Jane Austen was mostly educated at home by her father and elder brothers. In addition, she was also a voracious reader and imbibed a lot through her reading.
Another unusual source of her knowledge was the private theatricals that were staged by her siblings in the rectory’s barn. It is believed that they helped develop her sense of satire.
In the spring of 1783, Jane and Cassandra were sent away to study under Mrs. Cawley, a distant relative. But within a year, the girls were inflicted with typhus and nearly died from it. Therefore, they were brought back to Steventon.
In the spring of 1785, the girls were once again sent to a ladies boarding school, held in the gatehouse of the abbey in Reading, Berkshire. But they were brought back by December 1786, mainly because of financial constraints.
After that, Jane never left her family. She resumed her education under the guidance of her father as well as her brothers, James and Henry. Moreover, she now had full access to her father’s library. 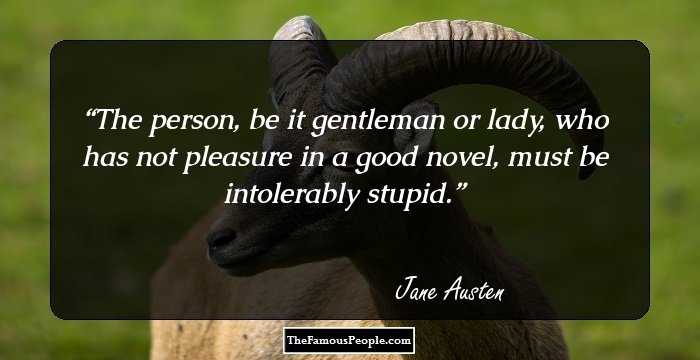 Continue Reading Below
Juvenilia
Sometime in 1787, Jane Austen began writing. By June 1793, she had created a large body of work, which she ‘fair copied’ in three large note books, now referred to as the ‘Juvenilia.’ Today, one of those books is preserved in ‘Bodleian Library’ and the other two in ‘British Museum.’
These notebooks contain 29 plays, verses, and short novels written in various stages. Among them, ‘Love and Freindship,’ a parody of romantic novel written in 1790 as letters from the heroine Laura to Marianne, showcases her dislike for sentimental fictions.
‘The History of England,’ written in 1791, is one of the components of these notebooks. Notwithstanding the name, it is actually a burlesque, poking fun at the schoolroom history textbooks available in those days.
Apart from writing, Jane Austen also loved socializing. She was fond of dancing and attended the balls held regularly at the town hall or at her neighbors’ residences. She was an excellent dancer. She also attended the church regularly and loved sewing. 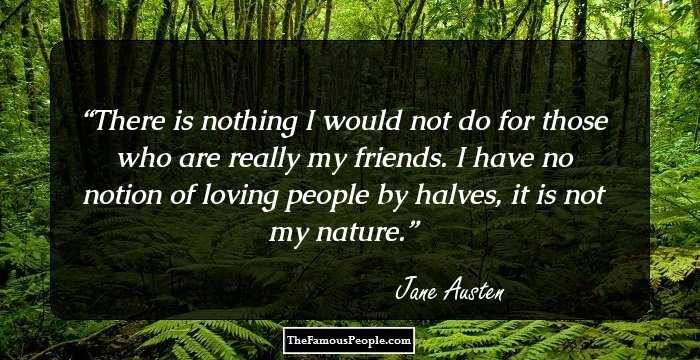 Quotes: Nature, Friends, I
Making of a Novelist
In the autumn of 1794, Jane Austen wrote her first serious work titled ‘Lady Susan.’ It is possible that she based the character of ‘Susan’ on her neighbor Mrs. Craven. However, the book was not published until 1871.
In 1795, she wrote ‘Elinor and Marianne.’ It not only remained unpublished, but its manuscript is also lost. Although it is certain that her later novel ‘Sense and Sensibility’ was based on it, in the absence of the manuscript, it cannot be determined how much of the original storyline had been retained.
In October 1796, she wrote another novel titled ‘The First Impression’ and completed the initial draft by August 1797. George Austen sent the manuscript to Thomas Cadell, an established publisher in London, but it was rejected. Much later, it was revised and published as ‘Pride and Prejudice.’
From November 1797, Austen began to revise ‘Elinor and Marianne.’ In August 1798, she started working on another novel titled ‘Susan,’ finishing it sometime towards the end of June 1799. It was a satire of the Gothic novels popular at the time.
Continue Reading Below
Leaving Steventon
In December 1800, George Austen decided to retire from ministry. Subsequently, he left Steventon and settled in Bath with his wife and two daughters. Not much is known about Jane Austen’s life from then until 1803 except that she received the only known marriage proposal sometime in 1802.
During this period, Jane’s productivity as a writer went down. Many historians take it as a sign of depression, which might have engulfed her during this period. However, others refuse to agree. They are of the opinion that she continued to revise her drafts.
In 1803, Jane Austen sold the rights of her novel ‘Susan’ for ten pounds to the London bookseller ‘Crosby & Co.’ Though the company advertised the novel, it later decided against publishing it.
In 1804, she started a new novel titled ‘The Watsons,’ which was about the harsh reality of economically dependent women. Very soon, her father became ill and with that their financial condition began to worsen. It became worse when he died in early 1805. However, her brothers pledged to help the female members of the family.
By now, Austen had abandoned her novel ‘The Watsons’ mainly because of her poor financial condition after her father’s death. Eerily, her financial condition had become something similar to that of her protagonist. Over the next few years, her life became too unpredictable for any kind of creativity.
After her father’s death, Jane, Cassandra, and their mother lived in a rented quarter in Bath until June 1805. Thereafter, they lived in various places before moving in with Francis and his wife in 1806. Although they stayed with them till 1809, the greater part of their time was spent visiting relatives.
Finally in early 1809, Edward, who had by then inherited his adoptive parents’ estate, invited his biological mother and sisters to settle down permanently in one of his cottages in Chawton, Hampshire. Subsequently, the three arrived at Chawton on July 7, 1809. Their family friend Martha Lloyd accompanied them. 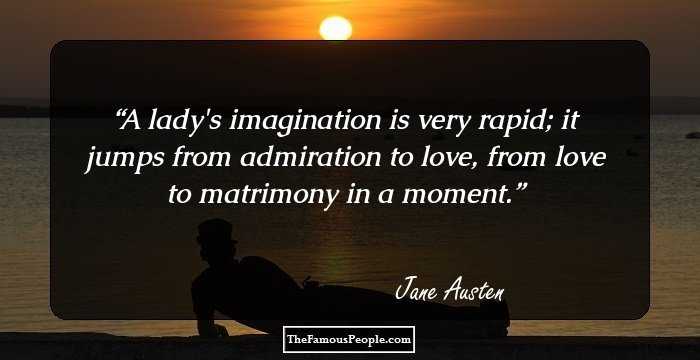 Quotes: Love
In Chawton
In Chawton, the four ladies led a very quiet life. They did not entertain much, read a lot and worked for the poor in spare time. They also taught a few children. Jane began revising her drafts, while her brother Henry began to talk to the publishers.
Continue Reading Below
Finally in 1811, the revised version of ‘Elinor and Marianne’ was published anonymously as ‘Sense and Sensibility’ by London publisher Thomas Egerton. Sold on commission basis, it earned her £140.
In 1813, ‘First Impression’ was published as ‘Pride and Prejudice.’ In this case, she sold the copyright for £110. The novel was an instant hit and by 1817, three editions had been sold out.
Her third novel ‘Mansfield Park’ was published by Egerton in May 1814. Although reviewers neglected it, it became a huge hit and earned her maximum profit.
Her fourth novel ‘Emma’ was published by John Murray, a better known London publisher, in December 1815. The book was dedicated to Prince Regent (later George IV), albeit at a discreet royal command.
Also in 1815, Austen began to write ‘The Elliots’ which was later published as ‘Persuasion.’ She completed her first draft in July 1816. By then, Henry Austen had repurchased the copyright for ‘Susan’ from Crosby, intending to publish it as ‘Northanger Abbey.’
Unfortunately, Henry’s bank failed and the brothers lost a large amount of money. As a result, another period of financial austerity began and the two novels could not be published until after Jane’s death.
Major Works
Jane Austen is best remembered for her second published novel ‘Pride and Prejudice.’ The story revolves around the life of five unmarried Bennet sisters and their relation to the rich and eligible Mr. Bingley. It also narrates the story of Bingley’s status-conscious friend (and even richer) Mr. Darcy who comes to live in their neighborhood.
Personal Life & Legacy
Jane Austen never married and remained close to her family till the very end.
Sometime in early 1816, Jane Austen was inflicted with an unknown illness, later diagnosed as Addison’s disease. However, she continued to write. By August, she had rewritten the final chapters of ‘The Elliots.’ She had also started a burlesque titled ‘Plan of a Novel, According to Hints from Various Quarters’ (published in 1871).
Next, she started working on ‘The Brothers’ (later titled ‘Sanditon’). However, her condition began to deteriorate and she made her will in April 1817. In May, she was taken to Winchester for treatment. She died there on July 18, 1817. Her body was buried in ‘Winchester Cathedral.’
The cottage in Chawton, in which she spent her last eight years, has been turned into a museum. Known as ‘Jane Austen’s House Museum,’ it holds Austen’s family items and furniture, three pieces of her jewelry, and eight music books which were owned by her. Besides, there is the ‘Jane Austen Centre’ at Bath. Apart from holding a life-size wax model of Jane Austen, it tries to depict her life at Bath and its effect on her writing.

Quotes By Jane Austen | Quote Of The Day | Top 100 Quotes

See the events in life of Jane Austen in Chronological Order