Mary Wollstonecraft was a famous, eighteenth-century British writer who is best known for her work, ‘A Vindication of the Rights of Women’. She was brought up in London by an abusive father and left home early in order to pursue a career in writing. She worked as a publisher of radical texts and as a translator, before she became a published author. A staunch Anglican, many of her works were inspired by her experiences at the church. During her brief career, she wrote a couple of novels, treatises, a conduct book and a children’s book. Although she was a feminist, she believed that both men and women should be treated as coherent beings, with a social mandate, instituted on reason. Until the late 20th century, her personal life received a lot more attention than her professional life, due to her various ill-fated relationships and a late marriage. Wife of William Godwin, one of the founding fathers of the anarchist movement, Mary Wollstonecraft’s life has been documented by her husband in ‘Memoir’, which sabotaged her reputation for a long period of time. Know more about her life in this brief biography. J. K. Rowling
DID WE MISS SOMEONE?
CLICK HERE AND TELL US
WE'LL MAKE SURE
THEY'RE HERE A.S.A.P
Quick Facts

British People
Novelists
Philosophers
Non-Fiction Writers
Women's Rights Activists
Childhood & Early Life
Mary Wollstonecraft was the second of seven children born to Edward Wollstonecraft and Elizabeth Dixon. Although the family led a comfortable life when she was a child, they eventually became bankrupt and had to sustain hardships.
Her father often turned violent and got physically abusive with her and her mother. Her mother soon passed away and perturbed by her father’s actions, she moved out of her house to earn her own livelihood in 1780. 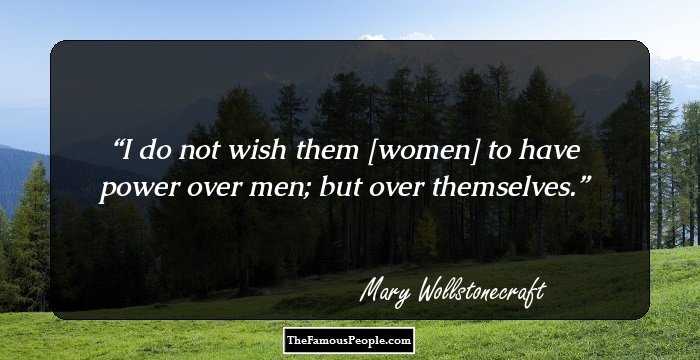 British Women
Women Writers
Taurus Writers
British Writers
Career
In 1784, Wollstonecraft, her sister Eliza and best friend, Fanny, established a school in Newington Green. The school closed down in 1785, when Mary abandoned it to be with Fanny, who had married and was living in Portugal, but was severely ill.
After Fanny's death in 1786, she took up the position as a governess for the Kingsborough family in Ireland, which made her realize that she was not suited for domestic/household work. She finally moved to London and was appointed as a translator to Joseph, Johnson, a publisher of radical texts.
In 1787, drawing from her experiences she wrote ‘Thoughts on the Education of Daughters’ in which she talked about the horror of intelligent women being subject to rich fools.
She became a regular contributor to John’s magazine, ‘Analytical Review’ in 1788.
One of her novels, ‘Mary: A Fiction’ condemned the patriarchal institution of marriage and described its effects on women. It was published in 1788 and became one of her most radical, feminist work.
In 1792, she published her most prominent work, ‘A Vindication of the Rights of Women’, through which she criticized the prevalent belief that women are just household adornments. The ideas presented by her in this book, were clearly revolutionary at the time and caused tremendous controversy.
Apart from her novels, she also wrote a reflective, travel narrative titled ‘Letters Written in Sweden, Norway, and Denmark’, which was published in 1796. 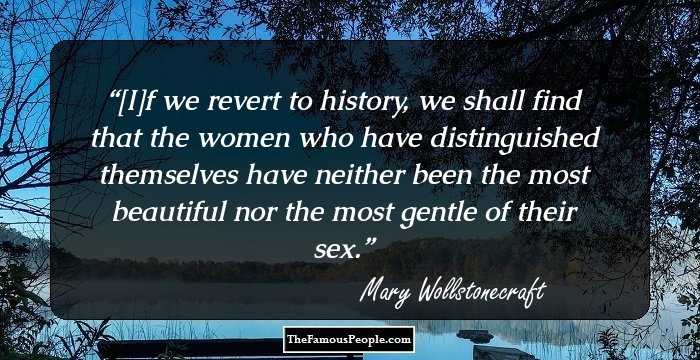 Women Activists
Women Novelists
British Novelists
British Activists
Major Works
‘Mary: A Fiction’ was published in 1788 which received moderate success, but was considered very bold and one of her most radical, feminist works. The book was reprinted in the 1970s and was translated into three languages, in the wake of the second wave of the feminist movement.
Continue Reading Below
In 1792, ‘A Vindication of the Rights of Women’, considered her most important work created a new wave of feminist sentiments. It argued that women ought to have an education commensurate with their position in society and that they should not purely be viewed as an objects of pleasure for men. While this publication attracted a lot of negative publicity at the time, it also received positive reviews and was even translated into French.
‘Letters Written in Sweden, Norway, and Denmark’ was published in 1796 and became one of her most popular books. It received positive reviews from the critics and also influenced poets like William Wordsworth. The first travel narratives of its kind, this publication was one of her last works, but earned her great fame towards the end of the 18th century.
Recommended Lists:

Women Philosophers
British Philosophers
British Women Writers
British Women Activists
Personal Life & Legacy
In 1792, while visiting a couple of friends in France, she met Captain Gilbert Imlay and they fell in love. She soon became pregnant and gave birth to their child, Fanny, named after her best friend.
In May 1795, she attempted suicide, after facing rejection from Imlay. After two failed suicide attempts she returned to the literary world and soon became involved in a relationship with William Godwin.
She soon became pregnant with Godwin’s child and the duo decided to marry, so that their child would be legitimate. They married on March 29, 1797 and moved into independent houses, where they communicated through letters. It was a brief, but a happy relationship.
On August 30, 1797, she gave birth to Mary Shelley, her second daughter, but developed some uterine complications during childbirth. Wollstonecraft passed away ten days later due to septicemia.
Following her death, Godwin published ‘Memoirs’ narrating her life and works. With the advent of the feminist movement, many budding writers like Emma Goldman and Virgina Woolf, began embracing her ideologies.
Wollstonecraft’s works returned to prominence in the 1960s and 1970s during the second wave of the feminist movement. Six books were published on her life and works which influenced Ayaan Hirsi Ali, a political writer and later, Nobel Laureate, Amartya Sen. 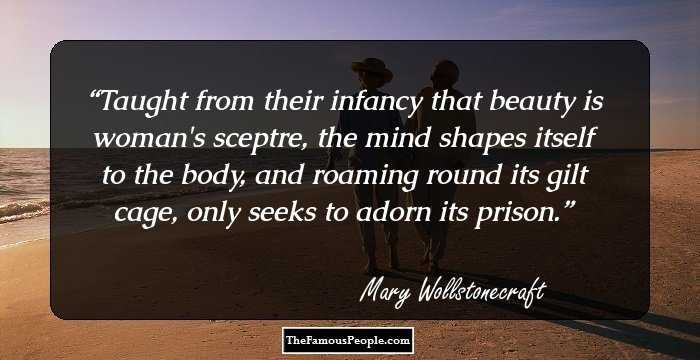 Quotes By Mary Wollstonecraft | Quote Of The Day | Top 100 Quotes

See the events in life of Mary Wollstonecraft in Chronological Order