Little did she, in her wildest dreams, anticipate that a delayed train journey from Manchester to London would change her life for good! The woman behind the Harry Potter franchise, J K Rowling or simply Joanne Rowling is one of the best-selling authors today. Rowling’s is a typical rags to riches story - from living on state benefits to becoming the multi-millionaire author, her life took a complete 180 degree turn when the first book of her conceptualized dream materialized on the bookstand by the name, ‘Harry Potter and the Philosopher’s Stone’. The antics of the bespectacled boy and the perfect imagery of the wizardry world left even the best of readers captivated for more. And hence started the journey of Harry Potter and his creator, via King’s Cross station, which took both the character and the author to reach the zenith of success and popularity! Today worth billions of dollars, the Harry Potter series, which comprises of 7 books and 8 films, has become the best-selling series of all time and highest grossing film series in history. Mark Gatiss
31st July In History
DID WE MISS SOMEONE?
CLICK HERE AND TELL US
WE'LL MAKE SURE
THEY'RE HERE A.S.A.P
Quick Facts

British People
Children's Authors
British Women
University Of Exeter
Leo Writers
Childhood & Early Life
J.K. Rowling was born as Joanne Rowling to James and Anne Rowling in Yate, Gloucestershire, England. Her parents were blessed with a second daughter Dianne just a month prior to Joanne’s second birthday.
Academically proficient, she attended the St Michael's Primary School before enrolling herself at the Wyedean School and College. For further studies, she admitted herself at the University of Exeter for BA in French and Classics.
Her tryst with writing fiction tales started when she was five - her first ever written story being ‘Rabbit’. Ever since then, she continued to pursue her love for writing by penning numerous stories.
Graduating in 1986, she moved to London and took up the job of a researcher and bilingual secretary for Amnesty International. Meanwhile, she penned a short essay titled, ‘What was the Name of that Nymph Again? or Greek and Roman Studies Recalled’ that was published in the University of Exeter's journal Pegasus. 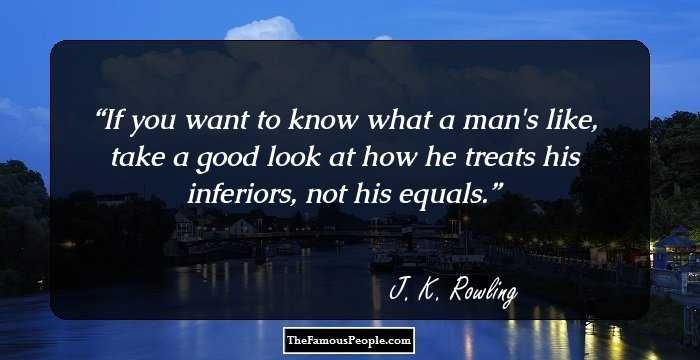 Quotes: You, Like
Continue Reading Below
Career
While on a journey from Manchester to London, a daring thought envisioned and captured her heart and mind like never before and she went on to dream a little more, thus forming the caricature of the bespectacled boy Harry Potter and his antics.
The adrenaline rush that she felt about the wizardry boy and his world left her bemused so much so that she did not waste time about penning her thoughts and rather kept on forming a more concrete idea. The same evening, she started penning 'Philosopher's Stone', the first of the Harry Potter series.
A vacancy of the position of a teacher led to her relocating to Portugal, wherein she spent the night teaching English. During the day, she assimilated thoughts and penned the first three chapters of her book.
Facing personal turmoil, she moved to Scotland in 1993 to live near her sister Dianne. Being at a major crisis situation with no job and a disrupted personal life, she inspired herself to write for this was the only passion that was left in her.
In 1995, she completed her manuscript of the legendary book, ‘Harry Potter and the Philosopher’s Stone’. After facing rejection from about 12 publishers, editor, she finally got green signal from Barry Cunningham of Bloomsbury.
Meanwhile, to support herself financially, she took up a teacher training course at the Moray House School of Education, at Edinburgh University. One thousand copies of the first edition of the book were printed, of which 500 were distributed to libraries.
The superlative success of the first of the Harry Potter series helped her gain an £8000 grant from the Scottish Arts Council. Additionally, she also gained money by selling the rights of publishing the book in the US to Scholastic Inc.
Moving to a flat in Edinburg, she immersed herself further into the series, chronicling about the life of Harry Potter, his school Hogwarts School of Witchcraft and Wizardry and his friends, knot-it-all Hermione Granger and the confused Ron Weasley.
She came out with the sequel of the book in 1998, titled, ‘Harry Potter and the Chamber of Secrets’. Much like its predecessor, the book was very well received and captivated the mind of the audience who kept craving for more.
Continue Reading Below
The wait wasn’t a very long one as she published the third book of the series, ‘Harry Potter and the Prisoner of Azkaban’ in 1999. By the summer of 2000, the three of the seven book series had already done a business of $480 million, with over 35 million copies in print in 35 languages
The craze and fan frenzy for the Harry Potter series had multiplied manifold so much so that she had to withdraw the fourth book of the series from contention to give the other books a fair chance.
Meanwhile, the overwhelming success of the Harry Potter series made it the single most profitable franchise for filmmakers. As such, capitalizing on the success of the written works, Warner Bros signed a deal with her to come up with film adaptation of the same.
On July 8, 2000, she released her fourth book, ‘Harry Potter and the Goblet of Fire’. The book crashed all the previous records and set new milestones in the literary world of fiction. It sold as many copies in the first day as ‘Prisoners of Azkaban’ sold in its first year!
In 2001, the film version of ‘Harry Potter and the Philosopher’s Stone’ was released. The film was greatly received at the box office, earning $90.3 million in its first weekend itself. Year 2002 witnessed the release of the next film of the series, ‘Harry Potter and the Chamber of Secrets’.
In 2003, she came with her fifth novel of the series, ‘Harry Potter and the Order of the Phoenix’, while the sixth book titled, ‘Harry Potter and the Half-Blood Prince’ came in 2005. It further created new records in the literary world by selling nine million copies in its first day itself.
In the meantime, the demand for the film adaptation of the novels also peaked.
In 2004, ‘Harry Potter and Prisoner of Azkaban’ was released while in 2005 came ‘Harry Potter and the Goblet of Fire’.
The final book of the series came on July 21, 2007, titled, ‘Harry Potter and the Deathly Hallows’. It became the fastest selling book of all time, with 11 million copies sold on its first day of release in UK and the US. The same year, film version of the ‘Harry Potter and the Order of the Phoenix’ was released.
Continue Reading Below
Year 2009 witnessed the release of the film ‘Harry Potter and the Half-Blood Prince’. The last book of the series was adapted in two instalments. While the first part was released in November 2010, the second and final part hit the theatres in 2011.
After the epic success of the Harry Potter series, she took a hiatus from the world of writing only to return to the bookstands in 2012 with ‘The Casual Vacancy’ aimed at adults. A dark comedy about local election in small English town of Pagford, the book received mixed reviews but nevertheless sold about 1 million copies in its first three weeks of release.
In 2012, she came up with a website Pottermore, which included some previously undisclosed information on characters, places and objects in the Harry Potter universe. Furthermore, she even started working on the encyclopaedia of Harry Potter penning various unpublished notes and materials.
In 2013, she came up with yet another adult book, ‘The Cuckoo’s Calling’ under the pseudonym, Robert Galbraith. A crime detective novel, it was first modestly received at the bookstands. However, the revelation of the fact that Rowling was its true writer escalated the sales by 4000 per cent.
Presently, she is supposedly working on two types of novels - one aimed for children while the other for adults. The work aimed at children is for a younger age group than the Harry Potter readers. 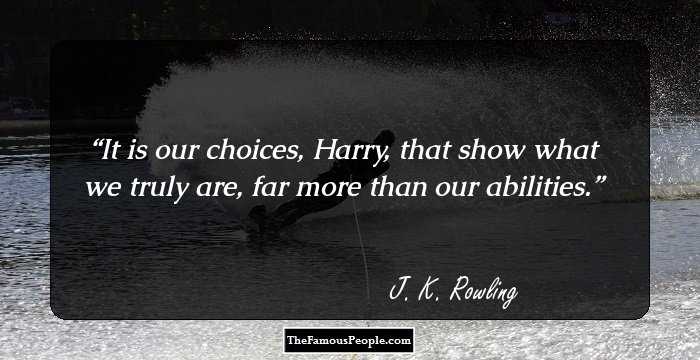 Major Works
Today, the Harry Potter franchise is worth an estimated $15 billion. A global brand, it has created world records in literary circles and continues to be the most loved fiction tale. The last four books of the series have broken all records to become the fastest selling books in history, with the last one selling a record 11 million copies on the first day of its release in UK and the US. The books have been translated into 65 languages and made her UK best-selling author with an estimated sales of £238m and more.
Awards & Achievements
For her outstanding contribution to the literary world, she has been conferred with the prestigious Legion d'honneur by French government and Order of the British Empire.
She is the proud recipient of the National Book Awards, British Book Awards, Hugo Award, British Book of the Year award, Locus Awar, Bram Stoker award, Hans Christian Anderson Literature award and many more. Furthermore, she has been offered honorary degrees from various universities and colleges. 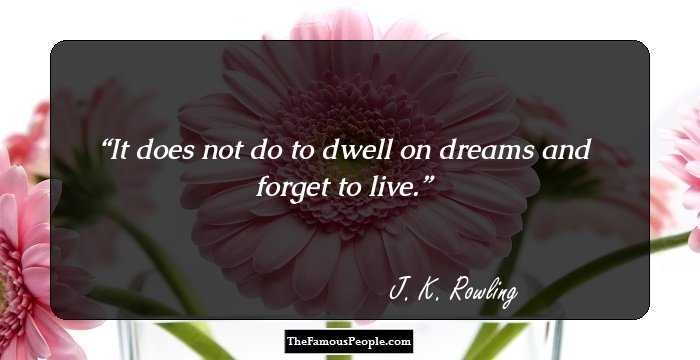 Quotes: Dreams
Personal Life & Legacy
She tied the knot with a Portuguese journalist, Jorge Arantes on October 16, 1992. The following year, they were blessed with a baby girl. However, the two did not stay long together and separated on November 17, 1993. She filed for a divorce in August 1994
In 2001, she got married for the second time to Neil Michael Murray, an anaesthetist by profession. The couple was blessed with a son David Gordon Rowling Murray and daughter Mackenzie Jean Rowling Murray.
A notable philanthropist, she has been supporting various charities such as Comic Relief, One Parent Families, Multiple Sclerosis Society of Great Britain and Lumos.
Trivia
During the printing of her first Harry Potter novel, the publisher asked her to use her initials rather than her full name to eliminate any sort of biasness for female writers.

See the events in life of J. K. Rowling in Chronological Order 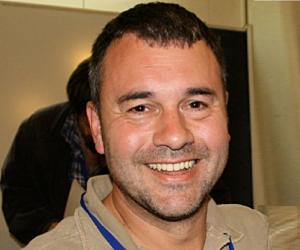