Rosalind Franklin was a renowned chemist from England who did pioneering work in the field of X-ray crystallography. Born to rich family, she pursued her education from premier institutions and was a bright student. Achieving stellar grades in the matriculation examination she received a scholarship but her father asked her to give the scholarship to deserving refugee student. It was when she enrolled at Cambridge that her scientific career truly began. She did an extensive study on coals and classified them into different category on the basis of their efficiency as a fuel. During one such study she was introduced to the technique of x-ray crystallography and Rosalind was intrigued by its scope thus deciding on pursuing a career in this field. She used x-ray imagery of coal to understand the changes occurring at molecular level in carbon when amorphous coal changes to solid graphite. Next she embarked on her most important discovery, the structure of DNA molecule. Working with Maurice Wilkins and a doctorate student Raymond Gosling, she was able to correctly assess the structure of DNA. Her theory that DNA consists of two helical structures was later confirmed by scientists James Watson and Francis Crick. She also played an important role in deciphering the RNA structure. Read on to know more about her life and works. Aaron Klug
25th July In History
DID WE MISS SOMEONE?
CLICK HERE AND TELL US
WE'LL MAKE SURE
THEY'RE HERE A.S.A.P
Quick Facts

British Celebrities
Biologists
Biophysicists
British Women
Leo Scientists
Childhood & Early Life
Born to British Jews, Ellis Arthur Franklin and Muriel Frances Waley on July 25, 1920, Rosalind Franklin was their second child. Arthur was a teacher of physics, specializing in electro-magnetism, at an adult education institute.
She completed her studies from schools in West London, Sussex and Brook Green. A bright student, she earned distinctions in six subjects in her matriculation examinations in 1938 and even received a scholarship for higher studies.
Rosalind then enrolled at the ‘Newnham College’ of ‘Cambridge University’ for her higher studies. She completed her bachelor’s degree in 1941 under the tutelage of teachers like W. C. Price. 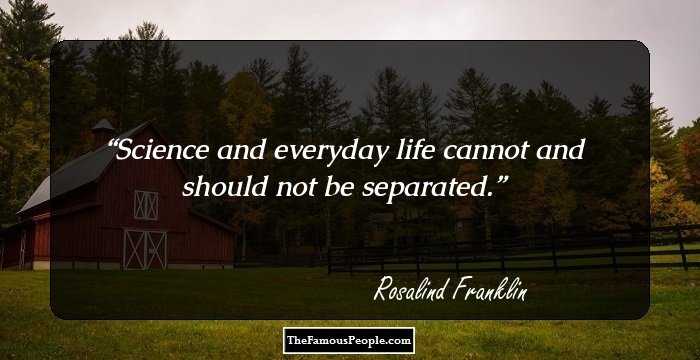 Quotes: Life
Continue Reading Below
Career
Rosalind embarked on her scientific career at the ‘University of Cambridge’ availing a research fellowship to work in the laboratory of chemist Ronald Norrish. But Ronald who was by then addicted to alcoholism turned out to be a poor mentor and eventually Franklin quit her job.
In 1942, she took up a position as the Assistant Research Officer in the office of ‘British Coal Utilisation Research Association’. It was during her tenure in BCURA that she catered to the air raid victims.
Her studies on porosity of coal led to the classification of coal and their optimum utilisation for developing war weaponry and her dissertation ‘The physical chemistry of solid organic colloids with special reference to coal’ was based on her research. The ‘Cambridge University’ presented her a doctoral degree in the year 1945.
After the war, she travelled to Paris and took up a position at the ‘Laboratoire Central des Services Chimiques de l'Etat’ in the city, in 1947. The fifteen member research team was led by the French engineer Jacques Mering.
Under the tutelage of Mering, who himself was an x-ray crystallographer; she learnt the nuances of the technique and its application in study of crystals. She extended her studies on coals and used x-ray crystallography to decipher the changes in molecular structure when amorphous coal is converted to graphite.
Returning to England in 1950, she obtained a fellowship to work at the King’s College in London. She then utilised her skills in x-ray crystallography when the ‘Medical Research Council’ of England appointed her as a research associate.
John Randall the head of biophysics unit asked her to assist the team working on deciphering the structure of DNA. She worked in association with physicist Maurice Wilkins and a doctorate student Raymond Gosling.
The trio discovered two forms of the DNA which were name DNA ‘A’ and DNA ‘B’, while DNA ‘A’ was a short and fat structure and was data rich, DNA ‘B’ was a long slender structure, generally seen in high humidity conditions.
By 1951, they had successfully deduced that the DNA ‘B’ was helical in structure but discrepancies in some of the images led to further research in the matter.
Continue Reading Below
After months of gruelling research work, in 1953, Franklin was finally able to establish that both the forms of DNA were comprised of two helical structures. The photograph which was dubbed as ‘Photograph 51’, taken by Franklin and Gosling, was critical to the discovery of the double helix model by Cambridge scientists Francis Crick and James D. Watson.
In March 1953, she left her position at the ‘King’s College’ to join the ‘Birkbeck College’. She worked with the pioneering crystallographer J.D. Bernal who presided over the physics department at Birkbeck. The funds for her research were granted by the ‘Agricultural Research Council’ of Britain and she was appointed as a senior scientist.
At Birbeck she concentrated on the nucleic acid RNA and utilised x-ray crystallography to produce images of the tobacco mosaic virus, a single stranded RNA virus. Her collaboration with biophysicist Aaron Klug began at the institute. After two years of research on the TMV, in 1955, she published her findings in the scientific journal ‘Nature’.
Her team at Birbeck consisted of her students Kenneth Holmes, Donald Caspar and her research assistant James Watt. While Kenneth worked on exploring the entire structure of RNA, Caspar was determined to pin-point the exact location of RNA on the tobacco mosaic virus.
They made a breakthrough discovery in this regard in 1956 and in the March issue of the journal ‘Nature’ they presented a paper that outlined the position and structure of RNA in tobacco mosaic virus.
The ‘Brussels World’s Fair’ or the ‘Expo 58’ as it is popularly known was the first World’s Fair organised after WWII, in 1958, and Franklin exhibited a display modelled on the tobacco mosaic virus which was five foot high and made using ping pong balls and bicycle handlebar grips. 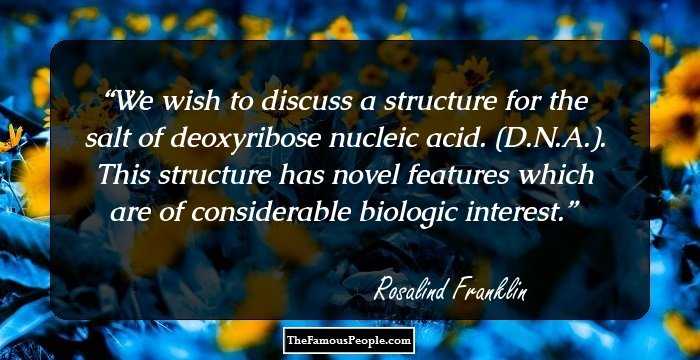 Major Works
Rosalind’s contribution in the field of x-ray crystallography is unparalleled; her studies on different forms of carbon and optimisation of coal were crucial in the manufacture of wartime devices like gas masks. She also made significant contribution in explaining the true structure of DNA and RNA.
Personal Life & Legacy
Rosalind never married though there were speculations of affairs with Jacques Mering and her Donald Caspar.
In 1956, she was diagnosed with abdominal cancer and she underwent treatment. Despite her frail health, she continued to marshal her team members at Birkbeck and eventually succumbed to the illness two years later on April 16.
This pioneering scientist is the eponym for several educational institutes and astronomical structures, which include the asteroid ‘9241 Rosfranklin’ and the ‘Rosalind Franklin Laboratory’ in ‘Birkbeck University of London’.
Trivia
This famous scientist was fond of outdoor activities like trekking and travelling places.
Recommended Lists:
Scientists #41
Physicians #6

See the events in life of Rosalind Franklin in Chronological Order