(English Scientist Who Contributed to the Study of Electromagnetism and Electrochemistry)

Michael Faraday was a British chemist and physicist best known for his study on electromagnetism, for which he is known as one of the greatest scientists of the 19th century. Born into a lower-class family, Michael did many odd jobs in his childhood along with his studies. He later became an apprentice at a bookbinding shop, where he got his hands on many scientific books that grabbed his attention in the field. He later became an apprentice of a great chemist named Humphrey Davy, with whom he spent almost a decade and became well versed in chemistry. He began working at the Royal Institution of Great Britain and in his laboratory, he conducted several experiments that made him famous as one of the greatest scientific minds of the 19th century. His greatest contribution is considered to be his work in the field of electromagnetism. He discovered electromagnetic induction and electrolysis. He is known to have played a great role in the invention of refrigerators, freezers and electric motors. Through his research and experiments, he also proved that light was also related to electromagnetism. John E. Walker
DID WE MISS SOMEONE?
CLICK HERE AND TELL US
WE'LL MAKE SURE
THEY'RE HERE A.S.A.P
Quick Facts

Michael Faraday was born on September 22, 1791, in Newington Butts, England to James and Margaret Faraday as the third one among four children. His family had moved to Newington Butts in 1791, a few months before Michael was born.

Michael was raised in a poor family. His father was originally from Yorkshire and wasn’t a well-educated man. He had been working as an apprentice of a blacksmith. Michael mostly attended a day school, where he learned the basics of reading and writing. He did not get access to good education and hence, for the larger part of his childhood, he educated himself.

He had also begun working early to support his family. At the age of 13, he began working with George Riebau, who had a flourishing bookselling business. Michael used to run errands for him and eventually began helping George with bookbinding. However, when he was not binding books or running errands for George, he would spend his time reading books. George also encouraged that habit.

Growing up, he became interested in physics with a fascination for topics such as galvanism and magnetism. In 1810, he began attending classes at John Tatum’s house, who was a famous British scientist and philosopher.

Michael was also into spirituality. Even though his family was poor, they were strong believers in a Christian sect called Sandemanians. Michael remained honest with his faith throughout his life and it was due to it that he was able to interpret nature the way he did.

While attending classes by John’s house, he also began small-time scientific experiments himself. One other major event that changed his life was lectures given by Sir Humphrey Davy at the Royal Institution of Great Britain. Humphrey was a revered scientist and a chemistry professor at the institute and attending his lectures made Michael sure that science was what his life was going to be centered around. 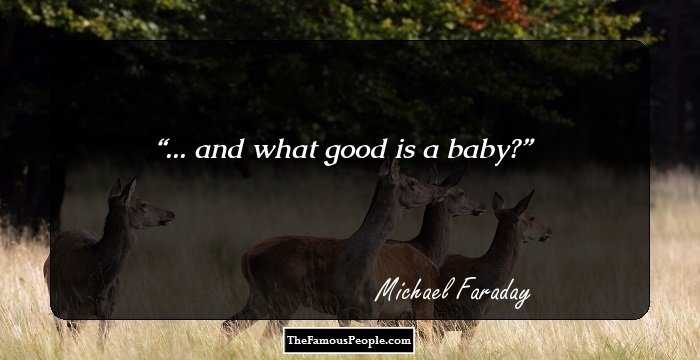 Inspired by Humphrey, Michael had noted down his entire lectures in notes. He wrote a letter to Sir Davy and tagged his notes which were 300 pages bound copy and some of his own research as well. Davy invited Michael to be his assistant when one of his assistants was fired. Michael jumped on the opportunity and began working with Davy as a research assistant in his chemist lab. It was later said that Faraday was Davy’s greatest discovery. Hence, at the age of 20, Michael began his career as a research assistant to one of the greatest chemists in England.

He also travelled through Europe with Davy and met many esteemed scientists in Switzerland, Germany and Italy during this one-year-long trip. However, Michel hated the way he was treated by Davy’s wife, due to his lower-class background.

For the next 8 years, Michael carefully studied all aspects of Davy’s work in the lab, from chemicals to gases, to acids, Michael grasped every information he could and by the time he left the apprenticeship in 1820, he was almost as good a chemist as Davy himself.

Other than assisting Davy in his research, Michael also conducted many of his own researches which later helped him make his pathbreaking discoveries. It was the beginning of his interest in the field of electromagnetism.

When he began working independently, he quickly became a well-known chemist. He discovered the first compounds of carbon in the same year as his apprenticeship ended. In the same year, another scientist named Hans Christian Ørsted proved that when an electric current passes through a wire, it produces a magnetic effect. This recent discovery caught Michael’s attention like nothing else. The experiment also proved that the magnetic field was circular in form. Michael successfully demonstrated that in his laboratory. The device, which converted electrical energy into mechanical energy, was the first electric motor.

In 1821, he was promoted to the position of Superintendent of the House at the Royal Institute. He stayed and taught there throughout his entire career. It was also the place where Michael conducted almost all of his experiments, which were in dozens.

In the early 1800s, John Dalton had made a discovery that all the gases could be frozen or liquefied by the use of very low temperatures and adjusting pressures. Michael was the first scientist to provide concrete evidence to this claim when he liquified ammonia and chlorine in his lab. He further made a discovery that if ammonia evaporated again after liquefaction, it can provide cooling. Thus, he gave the basic principle on which the modern refrigerators and freezers work.

In 1825, Michael discovered Benzene, one of the most important substances known to chemists. It aids greatly in understanding the chemical bonds and is also used in making new materials. However, throughout this time, he was working on one big thing that was going to transform the world forever.

He was working on electromagnetism since 1820. In a decade, he discovered that a varying magnetic field could be responsible for electricity flow in a circuit. Prior to that, only electric batteries were the main source of producing electricity. With this new discovery, Michael had proven that electricity could in fact be produced through movement. In other words, he found out that kinetic energy could be converted into electrical energy.

Later in 1845, Michael discovered what was later known as the Faraday Effect. In it, he linked light to electromagnetism. However, the full link was later established by the James Maxwell Effect which proved that light was an electromagnetic wave.

His reputation was soaring as his experiments began making waves. He was offered membership of the Royal Society in 1824. He was also offered its presidency, but he declined.

In 1832, he was offered an honorary Doctor of Civil Law degree by the University of Oxford. In the same year, he was made a foreign member of the American Academy of Arts and Sciences. He later earned similar honor in Sweden. He was also offered a knighthood for his services to the science but he rejected the offer. He had religious reasons for it as his faith did not allow him to use a Sir as a title.

He was also asked by the British Government to help develop weapons during the Crimean War, but Michael refused on ethical grounds. 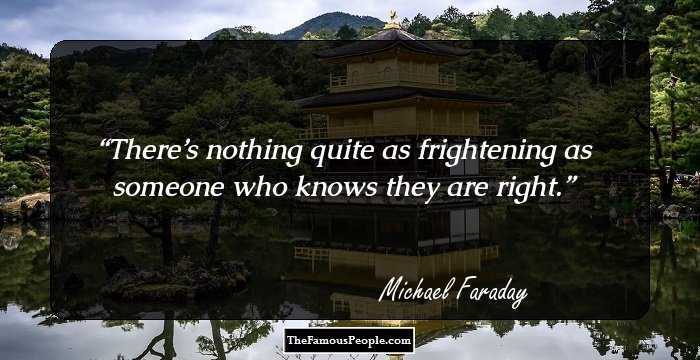 Michael Faraday married Sarah Barnard in 1821. The couple had no children.

Michael passed away on August 25, 1867, in Hampton Court, where he lived at that time. He was 75 years old at the time of his demise.

Quotes By Michael Faraday | Quote Of The Day | Top 100 Quotes

See the events in life of Michael Faraday in Chronological Order