Advanced Search
Lynn Margulis was an American biologist who completely altered the concept of how life arose on Earth. Born as the eldest of her siblings in Chicago, Margulis was not a class topper in Hyde Park Academy High School. She earned both her B.A. and M.A. degree from University of Chicago and then joined University of Wisconsin to study biology under Walter Plaut and Hans Ris. While pursuing research, she was offered a position as a research assistant and lecturer in Brandeis University. Throughout her career, she has scaled heights, the highest being the Distinguished Professor of Geosciences, a position she retained till her death. Margulis was married twice in her life. Although, she was a staunch evolutionist, she completely rejected the theory of modern evolutionary synthesis, which made her realize that she was more of a ‘neo-Darwinist’. Her theoretical paper on mitosing cells was rejected fifteen times before it was finally printed in and is now considered as the landmark argument in endosymbiotic theory. Margulis was a tenacious lady who defended her theory vehemently, even in the face of staunch criticism. Apart from her endosymbiotic theory, Margulis collaborated with James Lovelock, the British scientist on Gaia hypothesis. Apart from her scholarly articles, Margulis wrote a number of books interpreting scientific concepts for people in general. US & Canada
2000 - National Medal of Science for Biological Sciences

American Celebrities
American Women
University Of Chicago
University Of California, Berkeley
Women Botanists
Childhood & Early Life
Lynn Margulis was born on March 5th, 1938, in Chicago. She was the eldest of all the daughters born to Morris and Leona Wise Alexander. Her father was a lawyer and also owned a paint manufacturing company. Her mother was known to operate a travel agency.
In 1952, she was admitted to ‘Hyde Park Academy High School’, but she was never one of the bright students. At the age of 15, she was admitted to ‘University of Chicago Laboratory Schools’.
In 1957, at the age of 19, she got a BA degree in Liberal Arts. Margulis then joined ‘University of Wisconsin’ and studied biology under Walter Plaut, her supervisor, and Hans Ris.
In 1960 she graduated with a MS degree in zoology and genetics following which she started research under Max Alfert in ‘University of California’. 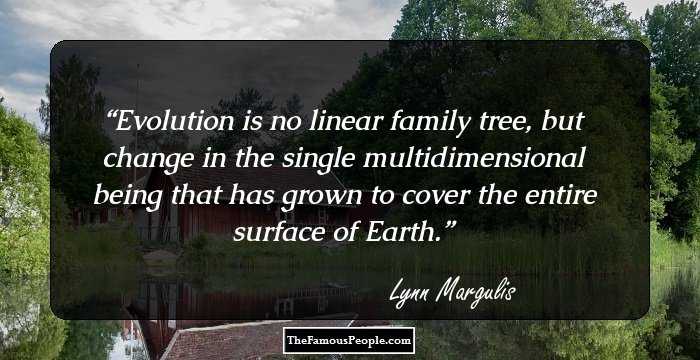 Quotes: Change, Family
Continue Reading Below
Career
In 1964, even before completing her dissertation she was offered a research assistantship and a position of lecturer in ‘Brandeis University’.
After obtaining her PhD degree from the ‘University of Berkeley’ in 1965, she moved to ‘Boston University’ the following year, where she taught biology for 22 years.
In 1966, Margulis wrote ‘On the Origin of Mitsoing Cells’, a paper which got rejected fifteen times before it found place in ‘Journal of Theoretical Biology’. This paper is considered as a landmark revelation in endosymbiotic theory.
Margulis initially started as an Adjunct Assistant Professor, but got the position of Assistant Professor in 1967.
Her endosymbiotic stheory completely revolutionized the concept of how life came on Earth. This was explained in details in the book Origin of Eukaryotic Cell which was published in 1970.
From 1971 to 1988, she moved from Associate Professor to Distinguished Professor of Botany in ‘University of Massachusetts’. During this phase, Margulis’ ‘cell theory’ found strong support from the evidences that the genetic material of chloroplasts and mitochondria are different from symbiont’s nuclear DNA.
In 1974, the eminent biologist collaborated with James Lovelock, who taught her about the ‘Gaia hypothesis’. They published a paper together which proposed that Earth is a complex entity, where both living and non-living objects are absolutely independent of each other. Their life-forms actually modify the environment so that there are favourable conditions for their survival.
In 1982, Margulis, in collaboration with Karlene V. Schwartz wrote Five Kingdoms, a book which classified life on Earth into five different types.
In 1993, the ‘Massachusetts University’, Amherst named her as a Distinguished Professor in Biology.
Continue Reading Below
In 1997, she shifted to the Department of Geosciences and became the ‘Distinguished Professor of Geosciences’, a post she retained till her death.
Margulis wanted everyone to understand science. Being a charismatic lecturer, she visited ‘Edinburgh Science Festival’ and encouraged school children.
She has a number of books to her credit, where she has explained concepts of science in simple way. The topics ranged from global warming to biological significance of sex. 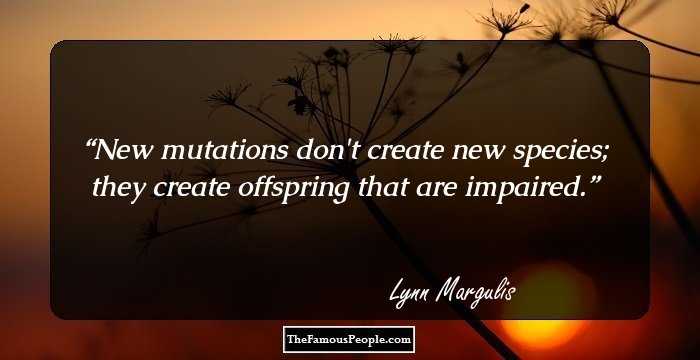 Major Work
Margulis who called herself a follower of ‘neo-Darwinism’, focused on the idea of symbiosis, the idea of living arrangement of two very different organisms either in beneficial or unfavourable position. Margulis’ endosymbiotic theory altered the origin of cells and explained that cells with nuclei or eukaryotic cells have evolved from the symbiotic merge of non-nucleated bacteria, which happened to live independently.
Awards & Achievements
In 1983, Margulis was elected to the ‘National Academy of Sciences’.
She was one of the three Americans who were members of the Russian Academy of Natural Sciences.
In 1999, the eminent scientist was awarded the ‘William Procter Prize of Sigma Xi’.
In 2008, she was awarded the ‘Darwin-Wallace Medal of Linnean Society of London’. 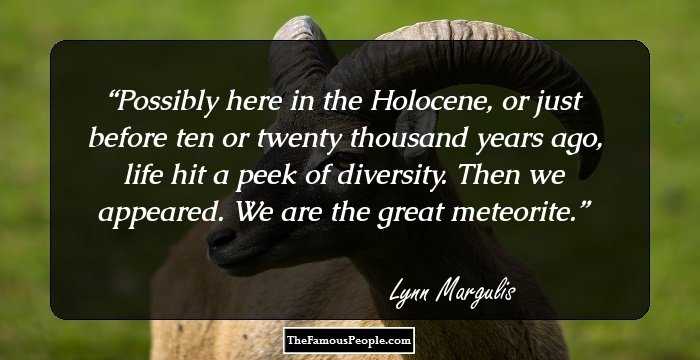 Quotes: Life
Personal Life & Legacy
In 1957, Margulis got married to Carl Sagan, the famous astronomer. Sagan was a graduate student in the department of Physics in ‘University of Chicago’. The couple had two sons; Dorian Sagan who became a famous science writer, and Jeremy Sagan who is better known as the founder of ‘Sagan Technology’.
In 1964, the couple got divorced, and Margulis got married to Thomas N. Margulis who was a crystallographer. From her second marriage, Margulis had a son Zachary Margulis-Ohnuma, who became a lawyer by profession and Jennifer who is known as a writer and teacher.
Her second marriage ended in 1980; according to the pioneering botanist, it was not possible to balance the duties of a wife and a scientist, and one has to let go of one thing, to concentrate on the other.
During the 2000s she had a relationship with a fellow scientist Ricardo Guerro.
The world saw the last of this evolutionary theorist on 22nd November, 2011 when she died in Amherst, of brain haemorrhage.

See the events in life of Lynn Margulis in Chronological Order