Elizabeth Helen Blackburn is an Australian-American researcher who was awarded the Nobel Prize in Physiology for her path-breaking work that led to the discovery of "telomerase", the enzyme that replenishes the telomere—a structure at the end of chromosomes that protects the chromosome. She shared the Nobel Prize with her fellow co-researchers Carol W. Greider and Jack W. Szostak. . Throughout her career, she has been honoured with numerous prestigious awards and honors including America’s top honor Albert Lasker Award in Basic Medical Research and Nobel Prize in Physiology or Medicine. She was also elected as a Fellow of the Royal Society of London, American Academy of Arts and Sciences and American Academy of Microbiology. For two years, she worked in medical ethics, serving as a member of the President’s Council on Bioethics but was controversially dismissed due to conflict with Bush administration. In recent years, she has been involved in a study that investigates the effect of stress on telomerase and telomeres with particular emphasis on mindfulness meditation. 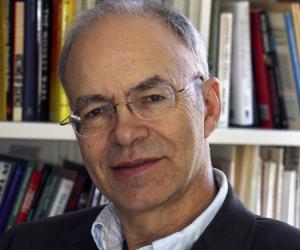 Gustav Nossal
Biologists #60
Scientists #501
Intellectuals & Academics #700
DID WE MISS SOMEONE?
CLICK HERE AND TELL US
WE'LL MAKE SURE
THEY'RE HERE A.S.A.P
Quick Facts

awards: Nobel Prize for Physiology or Medicine (2009)
Companion of the Order of Australia (2010)
L'Oreal-UNESCO Award for Women in Science (2008)

American People
Australian People
American Women
Australian Women
University Of Melbourne
University Of Cambridge
Childhood & Early Life
Elizabeth Helen Blackburn was born on November 26, 1948 in Hobart, Tasmania. She was the second of the seven children born to the couple. Both her parents were employed as physicians
When she was barely four years old, the family shifted to Launceston. It was there that she attended the Broadland House Church of England Girls’ Grammar School.
When she was sixteen, her family relocated to Melbourne where she enrolled at the University High School. It was during her time at the university high school that her interest in science was fuelled.
Matriculating with high marks, she enrolled at the University of Melbourne from where she earned a Bachelor degree in Science in 1970 and Master degree in Science in 1972.
Later moving over to England, she gained admission at the Darwin College at the University of Cambridge. In 1975, she gained her PhD degree.
Upon completing her doctoral studies, for two years, from 1975 to 1977 she d5d her postdoctoral work in molecular and cellular biology at the Yale University. It was during these years that she along with Joseph Gall undertook research of the single-celled organism, Tetrahymena and subsequently found out the presence of Telomeres.
Continue Reading Below
You May Like

The Sexiest Men Of 2020, Ranked
Career
In 1978, she joined the faculty of the University of California, Berkeley in the Department of Microbiology. Therein, she continued with her research on telomeres.
While at the University of California, she through her research came to know about the existence of a unique enzyme that controlled the duplication of telomere, continuously rebuilding the ends of chromosomes to protect them in the cells of young organisms, and allowing them to decay in older ones. However, the theory could not be proved and thus was rebuffed by scientists.
Meanwhile, Carol Greider, a science enthusiast, had completed her graduation with a major in biology. It was during an interview with Blackburn that she became interested in telomeres so much so that she decided to conduct her graduate research on telomeres, in Blackburn’s laboratory.
Together the two worked on finding out more about telomere’s regulating enzyme. They tried one method after the other, trying to observe the proteins found in telomeres, with an aim to discover if any of those performed the enzymatic activity that they were keen on discovering.
After failed attempts and unsuccessful trysts, they de-routed from their method and tried using oligonucleotides of DNA produced in a chemical synthesizer, rather than bacteria. To their surprise, the endless wait seemed to have paid off as an unfamiliar protein was finally detected in telomere. What’s more, it performed an enzymatic action as assumed and predicted.
Extremely excited and thrilled by the discovery, they continued experimenting just to be certain that there was no alternative explanation for the activity than what they had assumed. Finally, the duo deduced that the enzyme, which they named ‘telomerase’, was regulating the growth of telomere.
Telomerase was responsible for adding layers of repetitive DNA to the end of the chromosome when the cell was young, and then turning off, leaving the telomere to wear away and the cell to die.
Their research and discovery created a sensation in the scientific community which sensed that the discovery in the course of time may lead to new treatments for degenerative diseases, as well as cancer.
In 1990, she took up a position at the UC San Francisco (UCSF) where he worked in the Department of Microbiology and Immunology. She chaired the Department from 1993 to 1999.
Continue Reading Below
In 2002, she was appointed to serve on the National Bioethics Advisory Commission which she eventually did for two years until her termination in 2004. Her stay wasn’t a pleasant one as it was fuelled by contention between President and her. While she supported the human embryonic cell research, the Bush administration was against it.
Currently, she serves as the faculty member serving in both the Department of Microbiology and Immunology, and the Department of Biochemistry and Biophysics at UCSF. She is also a Non-Resident Fellow of the Salk Institute. Furthermore, she is the president-elect of the American Association for Cancer Research. She serves on the Science Advisory Board of the Genetics Policy Institute.
Her current research involves studying the effect of stress on telomeres and telomerase. According to the studies, psychological stress may accelerate the ageing at cellular level. Furthermore, it was found that in women subjected to intimate partner violence, the length of telomere was shortened, causing overall poor health and greater morbidity.
Awards & Achievements
In 1990, she was bestowed with the National Academy of Sciences Award in Molecular Biology.
The American Cancer Society conferred her with a Medal of Honor in 2000.
Other significant awards won by her include Australia Prize, Harvey Prize, Gairdner Foundation International Award, EB Wilson Award, Benjamin Franklin Medal, Keio Medical Science Prize, Dr A.H. Heineken Prize, Genetics Prize, Wiley Prize in Biomedical Sciences, L'Or�al-UNESCO Award for Women in Science, Mike Hogg Award
In 2006, along with Carol W. Greider and Jack Szostak, she was presented with America’s top medical honor, the Albert Lasker Award for Basic Medical Research
The TIME Magazine listed her in the 2007’s The TIME 100 list of The People who Shaped out World.
In 2009, she was conferred with the Nobel Prize for Physiology or Medicine which she shared with Carol W. Greider and Jack Szostak.
In 2010, she was elected as the Fellow of the Royal Society of New South Wales. Same year, she was appointed Companion of the Order of Australia.
In 2011, she was inducted into the California Hall of Fame.
Personal Life & Legacy
She married John W. Sedat, and the couple has a son named Benjamin. She currently lives in San Francisco.
You May Like

See the events in life of Elizabeth Blackburn in Chronological Order