Advanced Search
Carl Edward Sagan was an American astronomer, cosmologist, astrophysicist, astro-biologist and author. He developed interest in astronomy quite early at the age of five he first learned that the sun was actually a star and all stars are as big as sun. Much later, while studying in Chicago University, he came to know that astronomers make good money. All along, he had been pursuing astronomy as a hobby; now he was glad to know that he could take it up as his profession. Thereafter, he earned his PhD in astrophysics and after a brief period of fellowship at University of California, he took up teaching position, first at Harvard University and then at Cornell. Concurrently, he was also appointed a visiting scientist at NASA. Although he was a renowned scientist, working on planetary atmospheres, in astrobiology, and on the origin of life, he is best known for his work on extraterrestrial life. He also worked tirelessly to popularize science and authored many papers and books and regularly took part in television programs. All these made him the most known scientist in 1970s and 1980s. American Celebrities
Astronomers
Astrobiologists
Astrophysicists
American Men
Childhood & Early Life
Carl Edward Sagan was born on November 9, 1934 in Brooklyn, New York. His father, Samuel Sagan, was an immigrant from Kamianets-Podilskyi (now in Ukraine) and worked in the garment industry. His mother, Rachel Molly Gruber, was from New York.
Carl was the eldest of his parents’ two children; he had a sister called Carol. They lived in a modest house in Bensonhurst and had little money. Yet, their parents took care to nurture in them interest in different subjects, especially science.
In 1939, when he was not yet five, he was taken to New York’s World Fair by his parents. Although he was still a small child he was so impressed by different exhibits, especially the ‘Futurama’, that he was able to recall them later in life.
Carl began his education at a local elementary school. He discovered that the sun was a star and got amazed by the fact. Slowly, he began to develop interest in planets and stars.
In time, he enrolled at the David A. Boody Junior High School, where he developed interest in chemistry. However, astronomy remained his favorite hobby. In1948, the family shifted to Rahway, New Jersey and Carl was enrolled at Rahway High School and graduated from there in 1951.
Thereafter, he entered University of Chicago for his undergraduate study and earned his B.A. degree in 1954. All along, he had been fascinated by astronomy; but sometime now he came to realize that it could also be a career option. Therefore, he studied physics for one more year.
During this period, he worked in H. J. Muller’s laboratory and wrote a thesis on the origins of life with H. C. Urey, a physical chemist. Subsequently, he earned his B.S. degree in 1955 and M.S in 1956.
Thereafter, he started his graduation work with Gerard Kuiper. In 1958, while still pursuing his graduation work, Carl had the good fortune to work with Kuiper on the classified military Project A119. In 1960, he earned his Ph.D. in astrophysics. His dissertation was titled ‘Physical Studies of Planets’. 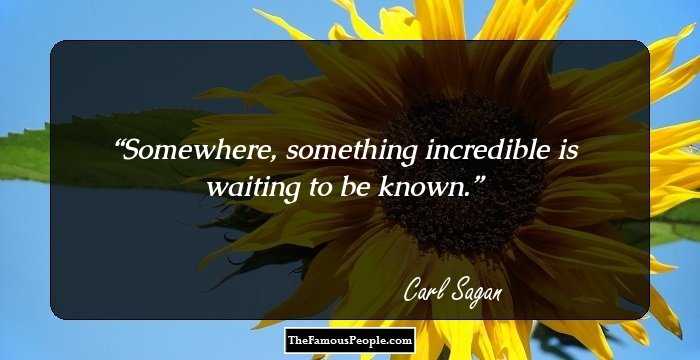 Continue Reading Below
Career
In 1960, Carl Edward Sagan began his career as a Miller Fellow at the University of California, Barkley. There, he helped a team of astrophysicists to develop an infrared radiometer for NASA’s Mariner 2 robotic probe.
In 1962, Sagan joined Smithsonian Astrophysical Observatory, an affiliated institute of Harvard University, as an assistant professor. Concurrently, he was a visiting scientist to NASA’s Jet Propulsion Laboratory.
In the latter capacity, he contributed significantly to the first Mariner missions to Venus, working both on its design and management. Working with Joshua Lederberg, Sagan also helped to expand the role of biology in NASA.
During this period, he mainly worked on the physical conditions of different planets, especially Mars and Venus. He established that the radio emissions from Venus were the result of very hot surface temperature caused by the sun’s heat, trapped between the surface of the planet and its carbon dioxide cloud-cover.
His theory refuted earlier notion that the atmosphere of Venus was more like earth’s atmosphere. Although many scientists were skeptic, it was confirmed first by NASA’s Mariner 2 and later by the Soviet scientists.
Sagan had also studied various data available on Mars. From that, he concluded that the bright regions observed on the surface of Mars were actually lowlands filled with wind-blown sand while the dark areas were elevated ridges or highlands.
During this period, he also became interested in life beyond the earth and experimentally demonstrated that amino acids could be produced from basic chemicals through radiation. From it, he concluded that existence of extraterrestrial beings was not at all farfetched.
In 1968, on being refused academic tenure at Harvard, Sagan joined Cornell University (Ithaca, New York) as an associate professor. In 1970, he became a full professor and also the Director of the Laboratory for Planetary Studies at the University.
In 1971, together with Frank Drake, Sagan co-designed the first physical message aimed at extraterrestrial intelligence. Known as Pioneer plaques, these were attached to Pioneer 10 and Pioneer 11 spacecrafts in the hope that extraterrestrial beings might find them one day.
Continue Reading Below
In 1972, Sagan became the Associate Director of the Center for Radiophysics and Space Research (CRSR) at Cornell and held the post till 1981. Concurrently, he continued working as a consultant to NASA and in 1975, helped select the Mars landing sites for the Viking probes.
In 1976, he became the David Duncan Professor of Astronomy and Space Sciences, a position he held for the remainder of his life. Concurrently, he also continued his association with NASA and co-designed Voyager Golden Record.
Thereafter, Sagan became involved with NASA’s next mission Galileo, initially christened Jupiter Orbiter Probe. Along with that, he continued his research on planetary atmospheres, in astrobiology, and on the origin of life.
Sagan was also a prolific writer and had successfully used his pen to popularize astronomy. He had published more than 600 papers and authored/co-authored/edited around twenty books. ‘Jerome Agel, The Cosmic Connection: An Extraterrestrial Perspective’, published in 1973, was first to turn him into a popular science writer.
His 1977 book, ‘The Dragons of Eden: Speculations on the Evolution of Human Intelligence’, was another of his popular works. In it, he had combined anthropology, evolutionary biology, psychology, and computer science to show how human intelligence might have evolved.
However, his best known work was ‘Cosmos’, published in 1980. In the same year, the book was turned into a thirteen part television series called ‘Cosmos: A Personal Voyage’.
Sagan himself was the presenter of the series and for a decade it remained the most widely watched series in the history of American public television. Apart from that, it was broadcast in 60 countries and watched by over 500 million people.
‘Cosmos’ was followed by bestsellers like ’Contact’ (1985), ‘Pale Blue Dot: A Vision of the Human Future in Space’ (1994) etc. His last major work was ‘The Demon-Haunted World: Science as a Candle in the Dark’ (1995). In it, he tried to explain the scientific method to laypersons and encourage skeptical thinking. 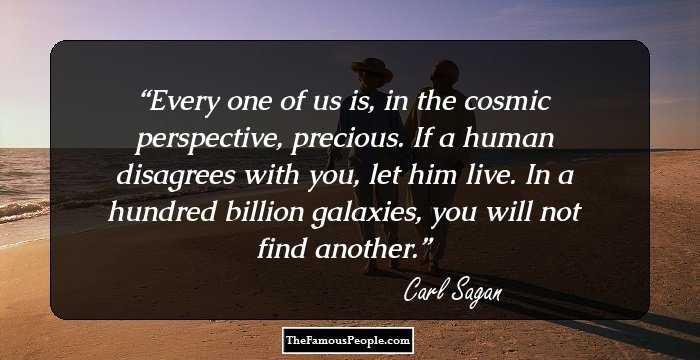 Quotes: You, Will
Continue Reading Below
Major Works
Carl Sagan is best remembered for his scientific research on extraterrestrial life. He showed that amino acids and nucleic acids, the two main components of life, could be created by exposing a mixture of certain chemicals to ultraviolet rays and therefore, life can exist outside the earth.
He is also known for assembling the first two physical messages sent into the space by NASA. The first was Pioneer plaques, set up on Pioneer 10 and 11 and the other was Voyager Golden Records, attached to Voyager 1 and Voyager 2.
The Pioneer plaques consisted of images of nude man and woman along with several other symbols co-designed by Carl Sagan and Frank Drake. It had the potential to be understood by any extraterrestrial intelligence that might find them one day.
Voyager Golden Records is a kind of time capsule, meant for communicating to extraterrestrials the story of the earth and its inhabitants. They comprised of 116 images and a variety of natural sounds as well musical selection from different ages and cultures, messages in Mores Code etc. The contents were selected by a committee chaired by Carl Sagan.
Awards & Achievements
All through his career, Carl Sagan was honored with a number of awards. Among them, NASA’s Distinguished Public Service Medal (1977& 1981) and the National Academy of Sciences’ Public Welfare Medal (1994) were most significant.
In 1978, he won Pulitzer Prize for his book ‘The Dragon of Eden’. 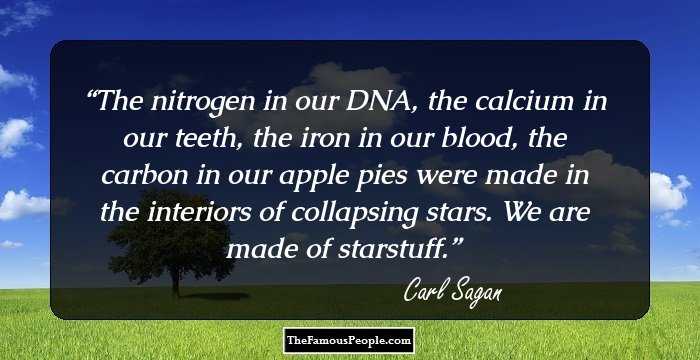 Personal Life & Legacy
Carl Sagan got married thrice in his life. In 1957, he married biologist Lynn Margulis. She was an evolutionary theorist, science author and educator. The couple had two children, Jeremy and Dorian Sagan.Themarriage ended in divorce in 1965.
He next married artist and writer Linda Salzman on April 6, 1968. She created the artwork for the Pioneer plaque, co-produced the Voyager Golden Record and co-authored ‘Murmurs of the Earth’. The couple had a son named, Nick Sagan. This marriage also ended in a divorce in 1981.
In 1981, he married Ann Druyan, an award winning writer and producer specializing in the communication of science. They had two children, Alexandra and Samuel Sagan. The marriage lasted until his death in 1996.
Two years before his death, Sagan developed myelodysplasia. Subsequently, he had to receive three bone marrow transplantations. Later he developed pneumonia and died from it in the early morning of December 20, 1996. He was then 62 years old.
Recommended Lists:
Scientists #8
Writers #191

See the events in life of Carl Sagan in Chronological Order