Lise Meitner is a renowned scientist from Austria who was a part of the team led by Otto Hahn that discovered nuclear fission in uranium. Her discovery of the phenomenon where the heavier uranium nucleus disintegrates to form lighter nucleus, heralded a new era in the world of nuclear physics. But sadly enough the Nobel committee ignored her contribution in the discovery and the deserving scientist was prevented from receiving the honour. Meitner always believed in herself and was fiercely independent and never would be seen adhering to the stereotypes. At a time when only a handful of women used to pursue higher education, she earned her PhD from the ‘University of Vienna’, thus becoming the second women to achieve the honour. Her parents supported the education of females and urged her to pursue her dreams. Though it was Meitner’s findings that started the quest for development of nuclear weapons, she declined the offer extended by the Manhattan Project committee to create an atom bomb instead she chose a career in the academics. The eminent scientist’s contribution was recognised by the scientific community and she was honoured with several awards and Albert Einstein heralded her as the “German Marie Curie”. Read on to know more about her life and works Max von Laue
DID WE MISS SOMEONE?
CLICK HERE AND TELL US
WE'LL MAKE SURE
THEY'RE HERE A.S.A.P
Quick Facts

German Celebrities
Swedish Celebrities
Swedish Women
University Of Vienna
Women Physicists
Women Scientists
Childhood & Early Life
Lise Meitner was born in the Leopoldstadt district of Vienna on 7 November 1878. Her family were believers of the Jewish faith and she had two elder and five younger siblings.
Her father Philipp Meitner was a distinguished lawyer in the city and had a well-established practice. The family was considered among the wealthiest in their neighbourhood.
After completing high school in 1901, she pursued higher studies from the ‘University of Vienna’ and her thesis for doctoral studies dealt with the subject of "heat conduction in an inhomogeneous body". She successfully completed her PhD and the university awarded her a degree in physics, in 1905. 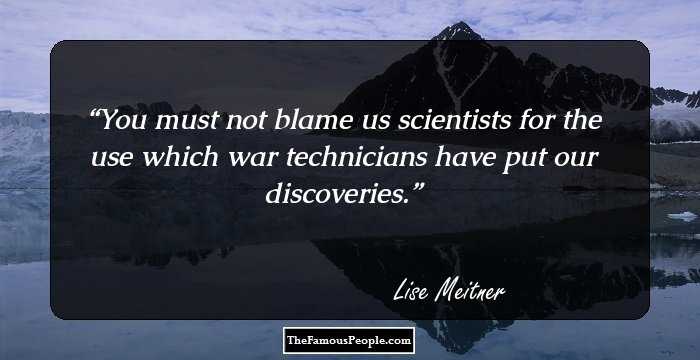 Quotes: You, War
Continue Reading Below
Career
After her doctoral studies she moved to Berlin and there she collaborated with chemist Otto Hahn. The duo embarked on study of radioactivity and discovered a new element, which was named protactinium, in the year 1918.
This genius mind then discovered the phenomenon of radiationless transition which occurs when an electron from higher energy level fills in the vacuum created by a core electron leaving the atom leading to liberation of energy. The transfer of energy can occur in the form of another electron leaving the same atom. This phenomenon where a secondary electron is released from the atom is named as the ‘Auger Effect’.
Though she discovered the phenomenon in 1923, it was named after another scientist Pierre Victor Auger who arrived at these conclusions about two years later. It was one of the many instances where Lise had to suffer the consequences of being a woman.
She was then offered a position of professor, at the ‘University of Berlin’ in 1926. Her appointment as the head of the physics department of the ‘Kaiser Wilhelm Institute for Chemistry’, earned her the distinction of becoming the first woman professor in Germany.
At Berlin, she continued her association with Hahn and the duo started the ‘transuranium research program’ in 1935. After Austria’s annexation, three years later, she moved to Sweden in order to escape from German oppression.
Despite all odds, she continued her research on transuranium program at ‘Nobel Institute’ in Stockholm. She met Hahn in Copenhagen where they decided to conduct several experiments. Their efforts bore fruition when they observed the phenomenon of nuclear fission in uranium for the first time during 1938-39.
Meitner’s nephew Otto Frisch worked in Copenhagen at the ‘Niel’s Bohr Institute’ and the two set about explaining the phenomenon of fission observed in uranium which produced a lighter element when bombarded with neutrons. Their findings were published in the scientific journal ‘Nature’.
The discovery of nuclear fission had a great impact on the scientific community and they started pondering the different ways in which the energy released during atomic disintegration can be harnessed. Various scientific groups started exploring the possibility of creating an atomic bomb.
This eminent scientist then worked with several government agencies including the ‘Swedish Defence Research Agency’ and ‘Royal Institute of Technology’. During this time she was involved with the development of nuclear reactor in Sweden.
Continue Reading Below
In 1947, she was honoured by the ‘University College of Stockholm’ which granted her a personal position at the institution and her research work was funded by the ‘Council for Atomic Research’.
She stayed in Stockholm till 1960, when she retired and moved to Cambridge, where most of her relatives resided. 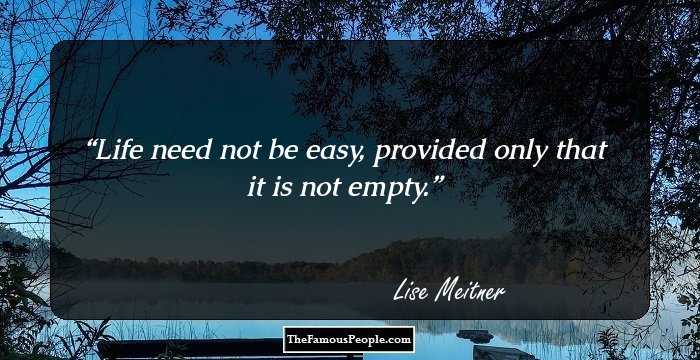 Quotes: Life, Need
Major Works
Lise Meitner worked with Otto Hahn in the team which discovered and successfully explained the phenomenon of nuclear fission. Though it was Meitner who deduced the most probable explanation of the phenomenon, she wasn’t nominated for the Nobel Prize.
Awards & Achievements
In 1946, Lise Meitner was named "Woman of the Year" by the National Press Club of USA.
The German Physical Society presented her with the ‘Max Planck Medal’, in 1949, for her contribution to nuclear physics.
Meitner was the first recipient of the ‘Otto Hahn Priz’e presented by the ‘German Chemical Society’ in 1955.
The highest German order ‘peace class of the Pour le mérite’ granted to a scientist was conferred upon her in the year 1957. The award was presented to her by German President Theodor Heuss.
Personal Life & Legacy
Towards the end of her life, Lise suffered from atherosclerosis which deteriorated her mental condition and in 1964 during a trip to the US she had a heart attack, which caused further complications.
Nursing a broken hip and several minor heart attacks, this eminent physicist breathed her last on 27 October, 1968 and she was interred in Hampshire.
In 1997, the element 109 on the periodic table was named after this pioneering scientist, as meitnerium. She is also the eponym for the educational institute ‘Hahn–Meitner-Institut’ and several astronomical structures which include craters on the planet Venus and earth’s moon.
Trivia
With the increasing Nazi oppression, Meitner was forced to flee Germany and her close friend and colleague, Otto Hahn, had given her an ancestral diamond ring that she could use to bribe the frontier guards to allow her to cross the border, if necessary. The ring was later passed on to Meitner’s nephew Otto Frisch’s wife.

See the events in life of Lise Meitner in Chronological Order