Advanced Search
John Dewey was a famous American philosopher, psychologist and educational reformer. He was also the founder of functional psychology and one of the earliest developers of philosophy of pragmatism. His ideas made significant impact in social and educational reforms. Apart from writing primarily in publication works, he also wrote about many topics including experience, nature, art, logic, inquiry, democracy, and ethics. He served as a major inspiration for various allied movements that shaped the thought process of 20th century, including empiricism, humanism, naturalism and contextualism. He ranks among the highest thinkers of his age on the subjects of pedagogy, philosophy of mind, epistemology, logic, philosophy of science, social and political theory. Being one of the leading psychological and philosophical figures of his time, he was elected as the president of the American Psychological Association and president of the American Philosophical Association in 1899 and 1905 respectively. Dewey published more than 700 articles in 140 journals and approximately 40 books in his lifetime. He had his last book published at the age of 90, two year before his death. Ralph Nader
DID WE MISS SOMEONE?
CLICK HERE AND TELL US
WE'LL MAKE SURE
THEY'RE HERE A.S.A.P
Quick Facts

American Celebrities
Philosophers
Psychologists
American Men
University Of Chicago
Childhood & Early Years
John Dewey was born on October 20, 1859 in Burlington, Vermont. His father, Archibald Sprague Dewey, left his grocery business during the Civil War to become a quartermaster in the Vermont Regiment. Afterwards, he opened a tobacco shop, running it successfully to provide his family with financial security and comfort.
His mother, Lucina Artemisia nee Rich, was almost twenty years younger than her husband. Daughter of a wealthy farmer, she was a devout Calvinist, possessing a stern sense of morality. She was stricter with her children than her easy going husband and made sure that they have college education.
John was born third of his parents four sons. Among his three brothers, the eldest, John Archibald Dewey, died in infancy. The second, Davis Rich Dewey, was elder to him by one and half years, while the fourth, Charles Miner Dewey, was younger by another one and half years.
Apart from his own siblings, John also had a cousin from his mother’s side, John Parker Rich, residing with them. Two years older to John Dewey, he was almost a brother to him.
John, like his brothers, had his early education at the Burlington public school, where children from all kinds of families, rich and poor, came to study. Some of them were old colonists while others were new immigrants. This enabled him to have a wide exposure from an early age.
Although his father did not nurture any ambition for his sons, he shared his passion for English and Scottish literature with them, encouraging them to read. Spending the summer holidays on his grandfather’s farm was another influencing factor in his formative years.
For their pocket money the boys delivered papers and worked at a lumberyard. They also went on camping and fishing, imbibing a lot from these trips. Thus, a large part of John’s early education was derived not from school books, but from outside experience.
John found the school curriculum a little boring. Nonetheless, he did exceedingly well in school and graduated from there at the age of fifteen. Thereafter, he entered University of Vermont, where his brother Davis was already studying.
At the university, he studied philosophy with Henry Augustus Pearson Torrey and was considerably influenced by him. During this period, he was associated first with Delta Psi and later with Phi Beta Kappa Society.
In 1879, John Dewey graduated with philosophy from University of Vermont. Thereafter, for two years he served at a high-school in Oil City, Pennsylvania teaching Latin, algebra and science for $40 a month. In the third yea, he returned to Vermont to teach at an elementary school in Charlotte.
Back in Vermont, he spent his leisure time studying treatises in philosophy, discussing them with Torrey. Very soon, he realized that he was not cut out for the job of a school master. He decided to do his doctorate in philosophy, studying the subject privately with Torrey, as prepatory measure.
He did his doctorate under the guidance of George Sylvester Morris at the School of Arts & Sciences at Johns Hopkins University. Dewey received his PhD in philosophy in 1884 and his dissertation was entitled ‘The Psychology of Kant’. 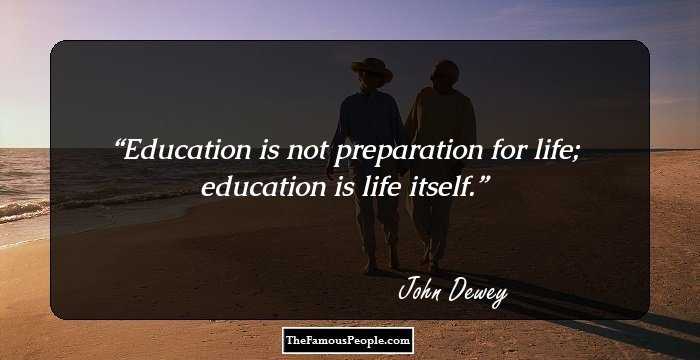 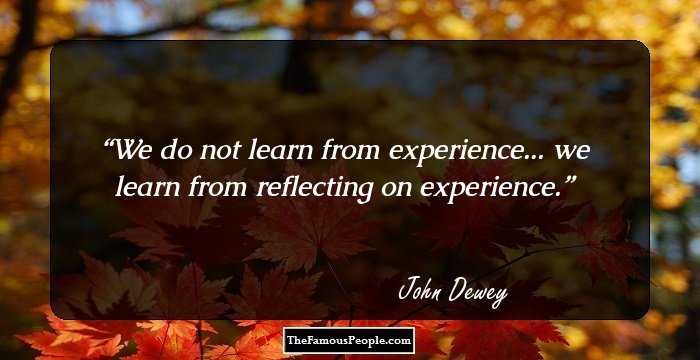 Quotes: Experience
At University of Chicago
In 1894, Dewey left University of Michigan to take up position at the newly founded University of Chicago. Tufts was already there. He now invited Mead and Angell to join him, thus forming the so called ‘Chicago Group’ of psychology.
Also, in 1894, Dewey established University Elementary School, an experimental primary school at the University of Chicago, with his wife, Harriet, as its principal. His main intension was to test his educational theories, which he had formed after extensive study of child psychology.
In 1896, he established his second school in the Hyde Park neighbourhood of Chicago. Known as the University of Chicago Laboratory School, it began as a progressive educational institution that went from nursery school to 12th grade.
Continue Reading Below
Also, in 1896, while working on what was later dubbed as ‘functional psychology’, Dewey published .his one of his seminal works. Entitled ‘The Reflex Arc Concept in Psychology’, it laid the foundation for American functional psychology.
In 1899, he had another important work, ‘The School and Society: Being Three Lectures’, published. It was his first work on education and created the foundation for his later works on the same subject.
Another of his important works of this period was a collection of four essays entitled, ‘Thought and Its Subject Matter’. It was published in 1903 as part of ‘Studies in Logical Theory’, a book that also contained articles written on the same subject by his Chicago colleagues.
At Columbia University
In 1904, John Dewey resigned from the University of Chicago after a disagreement with the authority. He then moved to East Coast, joining Columbia University as a professor of physiology. Since the salary was too low for his growing family, he also started teaching at the Teacher’s College under Columbia University.
He remained at the Columbia University until his retirement in 1930. All along he continued to produce number of important works, ‘Democracy and Education: An Introduction to the Philosophy of Education’, published in 1916, being one of them. 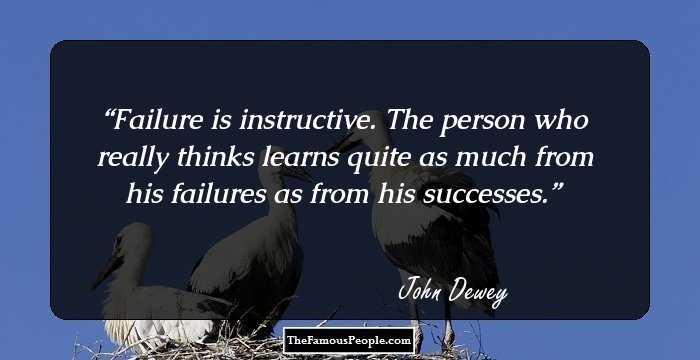 In China
In 1919, while teaching at the Columbia University, Dewey went on a sabbatical to Japan. From there, he went to China on an invitation from the University of Peking, reaching Shanghai on April 30, 1919.
On May 4, 1919, just a few days after his arrival at China, students in Peking took to the street, demonstrating against the decision of the Allies in Paris to handover Shandong Province, held by Germany, to Japan. Dewey was so energized by this movement that he stayed back until July 1921.
During his stay in China, Dewey gave at least two hundred lectures, which were attended by thousands of people. This is in spite of the fact, he spoke in English and lectures had to be interpreted by his former student, Hu Shih, later a renowned philosopher, essayist and diplomat.
Continue Reading Below
Return to USA
On his return to the USA in 1921, John Dewey continued to teach at the Columbia University, concurrently publishing number of important works. Among them, ‘Human Nature and Conduct’ (1922), ‘The Phantom Public’ (1925), ‘Experience and Nature’ (1925) and ‘The Public and its Problems’ (1927) are most significant.
During his tenure at the Columbia University, his fame as a philosopher, political theorist and as educator spread all over the world and his views were sought by the world community on different matters. In 1924, he was invited to Turkey, where he was asked to recommend educational policies.
In 1928, he was invited to the USSR, where he visited a number of schools. At home also, he played an active role in different educational as well as social issues. In 1929, he was appointed to the board of the First Humanist Society of New York.
After Retirement
In 1930, Dewey retired from the Columbia University, but continued to take occasional classes as professor emirates until 1937. Concurrently, he continued to publish several articles and books; his last major work, ‘Knowing and the Known’ was published in 1949. However, education remained his main concern.
In 1934, he visited South Africa, where he attended the World Conference of New Education Fellowship. Later, he visited other cities, both in South Africa and Rhodesia, Everywhere he inspected schools, gave lectures to the administrators and teachers, taking care to talk to the pupil.
From 1930s to 1950s, Dewey participated in various humanistic as well as social and political activities. He was one of original signatories of Humanist Manifesto I of 1933. An ardent supporter of democracy, he worked to establish it both in civil society and educational institutions.
Major Works
Among the forty books written by John Dewey, ‘Democracy and Education: An Introduction to the Philosophy of Education’ is his first major work. Published in 1916, it tries to synthesize and expand the educational philosophies of two major philosophers, Plato and Jean-Jacques Rousseau.
'Human Nature and Conduct': An Introduction to Social Psychology’ is another of his important works. Published in 1922, it tries to establish that understanding different types of habit is the key to social psychology.
'Art and Experience', published in 1934 is another of his major works. Dealing in aesthetics, the work has been found to influence a number of disciplines including the new media. Opposing the theories of Kant, Dewey tries to establish that to understand art one must start with daily events and scenes.
Awards & Achievements
In 1899, Dewey was elected president of the American Psychological Association.
He received honorary degree from several universities including the University of Oslo (1946), University of Pennsylvania (1946), Yale University (1951) and University of Rome (1951).
In 1943, he received Copernicus citation.
Personal Life & Legacy
In 1884, John Dewey met Harriet Alice Chipman, a former teacher and a student of philosophy at the University of Michigan. Although they started talking about marriage by March 1885, they waited for another year and got married after Harriet’s graduation in 1886.
The couple had six children. In spite of having a growing family, Harriet Alice supported her husband in every endeavor, acting as the principal of the elementary school he established in Chicago. She died in 1927.
On December 11, 1946, Dewey married Estella Roberta Lowitz Grant, a widow and a long time friend, whom he had first met while working at Oily City, Pennsylvania. They remained married until his death in 1952.
On June 1, 1952, John Dewey died of pneumonia in his New York City apartment. He was then ninety-two years old. He was later buried in an alcove on the north side of the Ira Allen Chapel in Burlington, Vermont. His is the only grave on the University of Vermont campus.
Today, he is recognized as the most influential philosophers on education and his name has become synonymous with progressive education movement in the USA. Many schools across the country have been named after him.
Recommended Lists:
Miscellaneous #32
Intellectuals & Academics #52

See the events in life of John Dewey in Chronological Order