Advanced Search
Samuel Benjamin Harris is an author, neuroscientist, philosopher, blogger, critic of religion, and podcast host. He is the chief executive and co-founder of Project Reason, a popular non-profit group that promotes science and secularism. The son of TV producer Susan Harris and actor Berkeley Harris, he grew up in a secular atmosphere which greatly shaped his views on religion and spirituality. He is referred to as one of the "Four Horsemen of Atheism", the others being Daniel Dennett, Richard Dawkins and the late Christopher Hitchens. An advocate of secular meditation practices, Harris has published numerous books till date. The most popular among them is his first book ‘The End of Faith’ that earned him the PEN/Martha Albrand Award for First Nonfiction. As a host, he is known for his association with the podcast ‘Waking Up with Sam Harris’. Harris has experimented with MDMA, commonly known as ecstasy, and has spoken and written about the insights he experienced under the drug’s influence. In 2009, he obtained his Ph.D. in cognitive neuroscience from the University of California, Los Angeles. Harris was a vegetarian at one point in his early life but gave it up after six years due to health issues. However, he returned to vegetarianism later on for ethical reasons. The American philosopher is a father of two daughters and has been married to editor Annaka Harris since 2004. Rosario Dawson
9th April In History
DID WE MISS SOMEONE?
CLICK HERE AND TELL US
WE'LL MAKE SURE
THEY'RE HERE A.S.A.P
Quick Facts

See the events in life of Sam Harris in Chronological Order 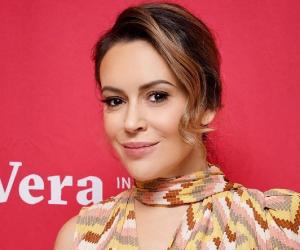