Advanced Search
Hermann Goring was one of the most phenomenal leaders of the Nazi party in Germany, and one of the closest aides of Hitler. Having keen interest in the military from childhood, he joined the military regiment and soon found fame as an ace fighter in the German Army. Disillusioned with the reigning politics, he joined the Nazi party and helped Hitler consolidate it into a major power. A trusted aide of Hitler, he soon became the second most powerful man after him, in Germany. He formed the Gestapo, the secret police force, and gave the command to one of his arch rivals, Heinrich Himmler. He was appointed Commander-in-Chief of the Luftwaffe, or German Air Force. He was the recipient of many awards for his bravery but had a weakness towards morphine and remained addicted to it till the end. He had confiscated much of property and art work from Jewish victims of the Holocaust to add to his collections. With the Luftwaffe succumbing to attacks from the Allied Forces in World War II, the Nazi party suffered defeat, forcing Goering to surrender. Accused of war crimes and crimes against humanity, he was tried at Nuremburg. He was sentenced to death by hanging, but committed suicide by consuming a cyanide capsule on the night before the hanging had to be carried out. Cause of Death: Cyanide Poisoning

German Celebrities
Political Leaders
German Men
Male Leaders
German Leaders
Childhood & Early Life
Born to Heinrich Ernest Goring and Franziska Tiefanbrunn, Hermann was the fourth of five children. Heinrich, a former cavalry officer, was also the Governor General of German protectorate in South West Africa and Franziska.
Karl, Olga and Paul were his older siblings and Albert was his younger brother. Goring had a godfather, Dr. Herman Epenstein, who was a wealthy businessman and a physician friend of his father.
Right from his childhood, he was interested in war games and loved playing with his toy soldiers wearing his Boer uniform, a gift from his father.
At the age of eleven, Hermann was sent to boarding school but he did not like the strict discipline and travelled back home by selling his violin. He was, however, promptly sent back after a few days.
While he grew up playing with his toy soldiers, he also studied war history in detail. He also liked mountain climbing and scaled the peaks of Austrian Alps at a very young age.
Goring was sent to the military academy at Berlin, when he was sixteen years old. He graduated from there with distinction, and was later found to possess an IQ of 138. 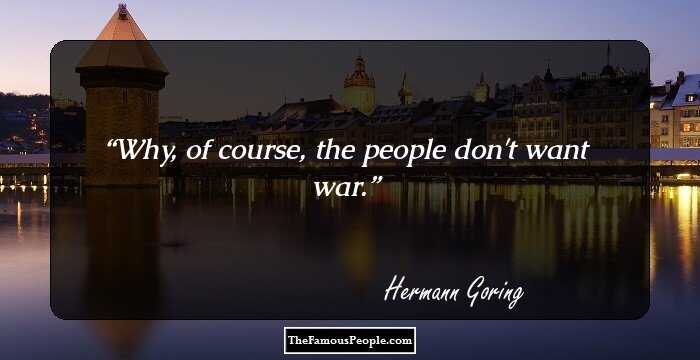 Continue Reading Below
Career
Goring joined the Prince Wilhelm Regiment of the Prussian Army in 1912. In the next year, his family was forced to move to Munich, and shortly after that, his father passed away.
After World War I, he joined the air force combat after being coaxed into it by his friend, Bruno Loerzer. They flew as a team in bombing missions in the Crown Prince’s ‘Fifth Army’ and were awarded the ‘Iron Cross’ for their efforts.
By 1917, he was assigned to several air combat missions, seriously injuring himself in one - it took him an year to recover. He had finished the war with about twenty two victories to his credit.
In July 1918, Goring was made the commander of the mission, ‘Flying Circus’. However, his arrogant attitude earned him dislike and disobedience of his team mates.
After the war, he continued to be in the aviation field and worked briefly for Fokker. In 1919, he left Denmark and went to live in Sweden to join the Swedish airline called ‘Svensk Lufttrafik’.
He was often hired for private flights and in 1921, was hired by Count Eric von Rossen to fly him to his castle from Stockholm. It was then that he met Baroness Carin von Kantzow, the count’s sister in law, who would become his wife.
It was in 1922 that Goring met Hitler and joined the Nazi party. He was in command of many wings and was finally appointed the Lieutenant General of the SA division, a post he held for many years to come.
In 1923, inspired by Mussolini, Hitler’s Nazi party attempted to seize power in an operation called the ‘Beer Hall Putsch’. It was a failed coup, with many Nazis including Hitler being arrested, and Goring getting shot in his leg.
By 1925, Goring had become dangerously addicted to morphine and was sent to asylum. He had violent outbursts, which even led him to be confined to the strait-jacket, but he was pronounced sane by his psychiatrist.
Continue Reading Below
He returned to Germany during amnesty and resumed work in the aircraft industry. However, his wife, who suffered from epilepsy and tuberculosis, succumbed to her illness and lost her life shortly after that.
The economy had picked up in the late 1920s, and the NSDAP strengthened itself, forming their new SS wing. It was the famous Wall Street crash that led to a fall in the German economy and the victory of the Nazi party in the next elections.
The Reichstag Fire of 1933 lent a phenomenal twist to the Nazi uprising in Germany. Goring called for a crackdown on communists who were believed to have started the fire, but later, it was rumoured that he was responsible for starting the fire.
When Hitler was Chancellor of Germany, Hermann Goring was appointed a minister and Reich Commissioner of Aviation. He set up a police force called Gestapo and made Himmler its leader in 1934.
In 1935, the German ‘Luftwaffe’ was set up and Goring was appointed the Commander-in-Chief. This was a coveted position which Goring held on to, until the Second World War.
In 1939, Hitler declared war on Poland, and the Second World War began. He named Goring as his successor and gave him the special rank of the Marshall of the Empire.
By April 1945, Germany was almost overpowered by the Allied Forces and this led Hitler and his wife Eva Braun to commit suicide. Goring surrendered to American troops. 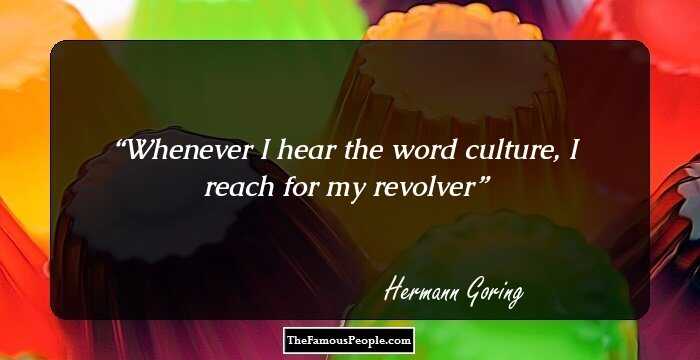 Major Battles
In the first World War, Hermann Goring served at the Mulhausen infantry regiment, which was very close to the French frontier. However, due to damp trench conditions at the camp, he suffered from rheumatism and had to be hospitalized.
Continue Reading Below
During World War II, Goring rose to power alongside Hitler and, in 1935, he took command of the German air force. Goring attempted to assume Hitler’s powers, leading Hitler to think that Goring was cheating on him and placed him under house arrest, after stripping him of all titles.
Awards & Achievements
Hermann Goring was awarded the ‘Knight’s Cross of the Iron Cross’ in 1939. This was the highest award given in the military of the Third Reich during World War II, for excellence as senior commander.
He was also awarded the ‘Grand Cross of the Iron Cross’ in 1940, the only award of this decoration. This was awarded to him for the victories of the Luftwaffe during the French campaigns. 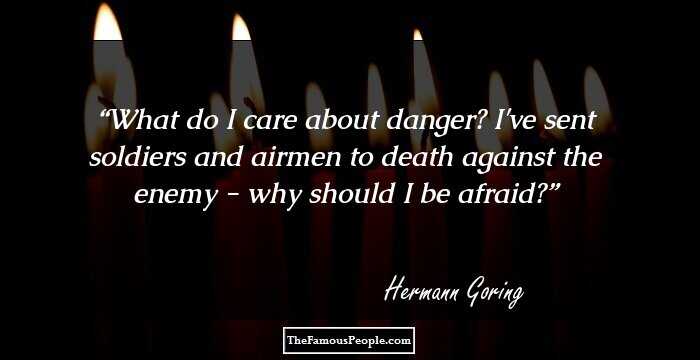 Personal Life & Legacy
His first wife was Baroness Carin von Kantzow, who had been estranged from her husband and had a son of eight years. They were married in 1922 after Carin obtained a divorce, and lived in Munich, until she died of illness.
His second marriage was with Emmy Sonnemann, an actress from Hamburg, in April 1935. They had a daughter named Edda Goring, born to them three years later.
Hermann Goring was tried and was condemned to death by hanging. But on the night before the execution, Goring consumed a cyanide capsule and committed suicide.
Trivia
This German general confiscated and amassed collections from Jews. He built a huge lodge named Carinhall for displaying the confiscated items; he also had his wife’s body placed in a vault there.
This extravagant German commander was famous for his garish selection of clothes. He had a collection of uniforms for the various posts he held, apart from some bizarre and outlandish costumes which he used to wear for parties.

Quotes By Hermann Goring | Quote Of The Day | Top 100 Quotes

See the events in life of Hermann Goring in Chronological Order