Advanced Search
Heinrich Himmler was a German Nazi military commander and close associate of Adolf Hitler. He rose to power during the ‘Second World War’ and is known as one of the men responsible for the ‘massacre of Jews,’ one of the most notorious holocausts in human history. In 1925, he joined the ‘Nazi Party.’ By the next decade, he had established himself as Reichsführer of the ‘Schutzstaffel’ (SS), and was later appointed as a police commander. Under his command, SS grew larger than ever in terms of manpower. By 1934, he was amongst the most feared and respected Gestapo officers. He became the second most important officer of the Gestapo after Hitler. As per Hitler’s orders, he set up and controlled the concentration camps. He formed the ‘Einsatzgruppen’ and on behalf of Hitler, laid the foundation of extermination camps. Hence, he was held responsible for the brutal massacre of the Jews, which ended the lives of about six million people. Hitler had immense faith in him and made him in-charge of ‘Army Group Upper Rhine’ and ‘Army Group Vistula’ towards the end of the ‘Second World War.’ In April 1945, Hitler held him responsible for conspiring against him and had him arrested. On 23 May 1945, Himmler committed suicide under British custody. German Celebrities
Libra Leaders
Male Leaders
German Leaders
German Military Leaders
Childhood & Early Life
Heinrich Luitpold Himmler was born on 7 October 1900, in Munich, Kingdom of Bavaria, German Empire. He was born into a German Roman Catholic family. His father Gebhard Himmler was a school teacher and his mother Anna Maria Himmler was a devout catholic woman. Heinrich received his education from a grammar school; his father was the principal of the school.
As a kid, Himmler despised athletics and was very studious. He was shy and awkward which worried his father who forced him to work hard in sports, but Himmler never felt comfortable taking part in athletics. Instead, he immersed himself in the studies of religion, mysticism, and sex.
As a teenager, Himmler showed immense patriotism and wanted to serve his country in the ongoing ‘First World War.’ At the age of 17, his father got him enrolled into the reserve Battalion of the 11th Bavarian regiment using his connections with the royal family. However, those were the last few days of the ‘First World War’ and Germany was already on the verge of losing.
He continued with his education after the war and became seemingly interested in the mystic studies and German mythology. He wanted to become a doctor but his parents refused to pay for his education and he went on to receive a diploma in agricultural studies. He took up a few odd jobs before quitting in 1923 to fulfil his military aspirations. 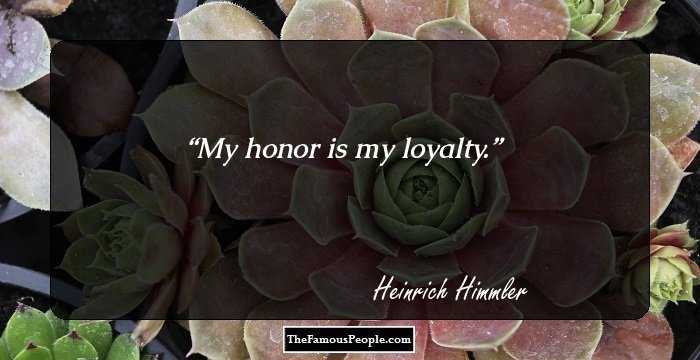 Continue Reading Below
Career
He became interested in the actions of the rightist paramilitary organizations and went on to meet Ernst Rohm in 1923. He joined the ‘Bund Reichskriegsflagge’ and participated in Hitler’s abortive ‘Beer Hall Putsch,’ which took place in Munich in November 1923. He gradually moved up the ladder, joined the ‘Nazi Party’ in 1923 and the SS in 1925. He was later elected as a deputy in the German Parliament, ‘Reichstag.’ He achieved immense success by the time he turned 30. When he began his term as Reichsführer for the SS (Hitler’s elite bodyguards), his stature grew further.
Under his command, SS became a strong force and its manpower increased to more than 50,000 within a very short period of time. When Hitler rose to political prominence in 1933, Himmler was made the head of Munich police. It didn’t take him long to become the commander of all German police, apart from Prussia. Performing his duties and following Hitler’s order, he came up with the first concentration camp for the Third Reich in Dachau.
Hitler appointed him as the assistant chief of Gestapo in 1934, enabling him to control the police forces in Germany. He also played a major role in SS vs SA, which the former won, giving Hitler the control over German army. Under his command, SS went on to become the most powerful armed body after the army, which also happened to be under Hitler’s command. They had become invincible and when the ‘Second World War’ broke out, Germany looked up to Himmler and Hitler.
Meeting everyone’s expectations, Himmler worked towards making SS impenetrable and succeeded. In 1941, Hitler ordered him to invade Soviet Union. A widespread massacre took place when Himmler resorted to violence and force in order to wipe out all the political enemies of the Third Reich. He organized extermination camps in the German occupied Poland, and systematically slaughtered millions of Jews. Another place where Jews were murdered was Babi Yar in Ukraine.
The downfall of Himmler started in 1943 when Hitler appointed him as the interior minister of Reich administration. He then indulged in the expansion of the Waffen-SS; it grew as large as 35 divisions, close to the army in terms of manpower. He also managed to gain control over intelligence units, military armaments, the ‘Volkssturm,’ and later a guerrilla force named ‘Werwolf.’ He also gained control over two army groups.
With several factions under his command, Himmler’s aspirations grew beyond military and he started planning for a SS industrial empire. His plan was condemned by Albert Speer who wanted to concentrate only on the war. Hitler’s entourage started downplaying Himmler, largely due to his recurrent stomach illnesses. Feeling ignored and in a fit of rage, he started plotting the downfall of Hitler’s empire in 1945, but Hitler came to know of his intention. 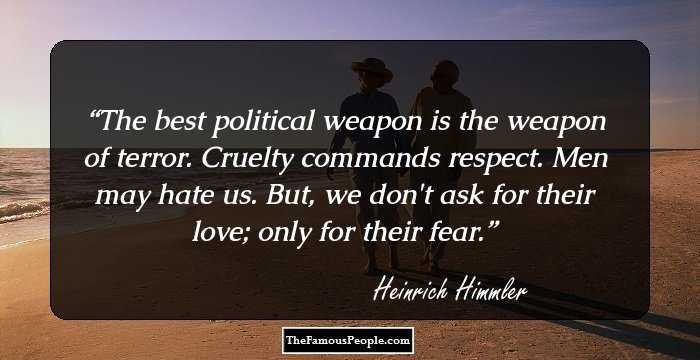 Quotes: Fear
Final Days
Hitler ordered Himmler’s arrest. Subsequently, he went into hiding. He was caught by the British Army while planning an escape, disguising himself as a common soldier. Under their custody, he committed suicide by consuming poison.
Legacy
Heinrich Himmler was one of the key reasons behind Hitler’s rise to power. He remained devoted to him till the last few weeks of his life. However, a clash in ideals and distrust caused him to move away from Hitler. While he was loyal to Hitler, he set up the concentration camps and played a major role in growing the manpower of the SS by inspiring the common Germans to fight for their country. At the peak of his career, he wiped out most of Hitler’s enemies within and outside the country. 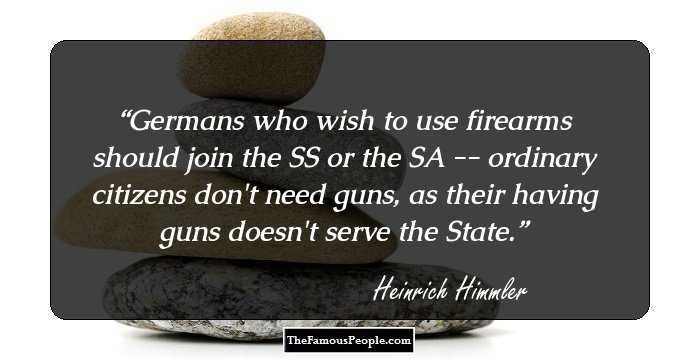 Quotes: Need
Personal Life
Heinrich Himmler met Margarete Boden, seven years his senior, in 1927. They started dating and got married the next year. Margarete Boden gave birth to their only child, a daughter named Gudrun. The couple was also foster parents to Gerhard von Ahe, the son of an SS officer.
Although he was in a happy marriage with Margarete, he got attracted to his secretary Hedwig Potthast and made her his mistress in 1939. His wife protested, but eventually gave up and didn’t even consider divorcing him. She stayed loyal to him till the very end. Meanwhile, Hedwig gave birth to two children, a son named Helge and a daughter named Nanette Dorothea. Both Margarete and Hedwig admired Himmler for what he did for his country and hence remained loyal to him till the very end.

See the events in life of Heinrich Himmler in Chronological Order